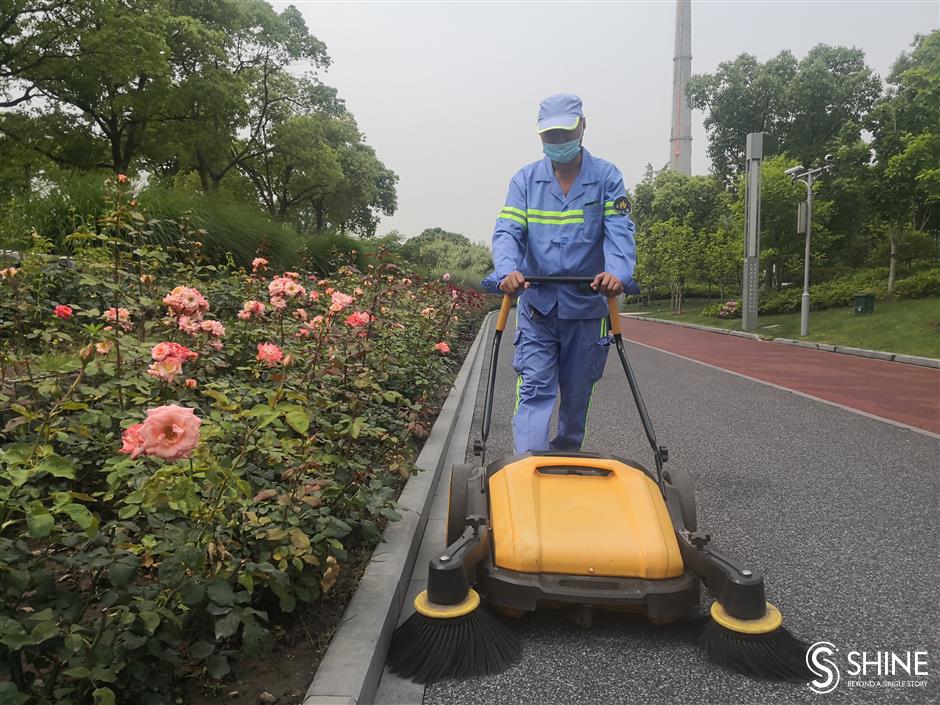 Ding Bitang, a sanitation worker, use a sweeping machine to clean the south riverfront area of the Huangpu River on Wednesday. 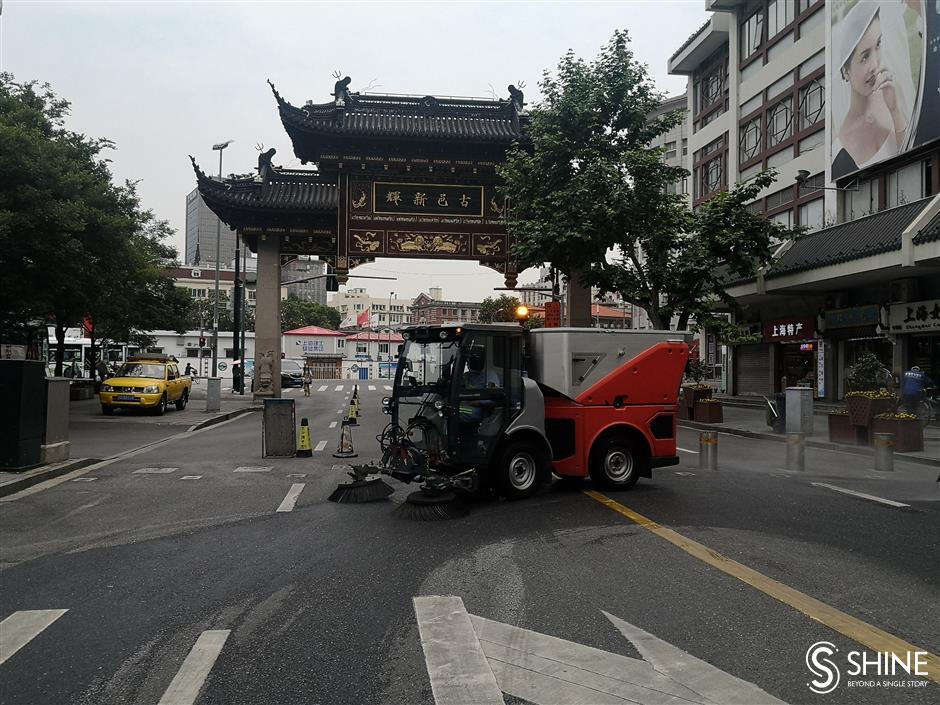 A vehicle cleans a road at the Yuyuan Garden tourist attraction. 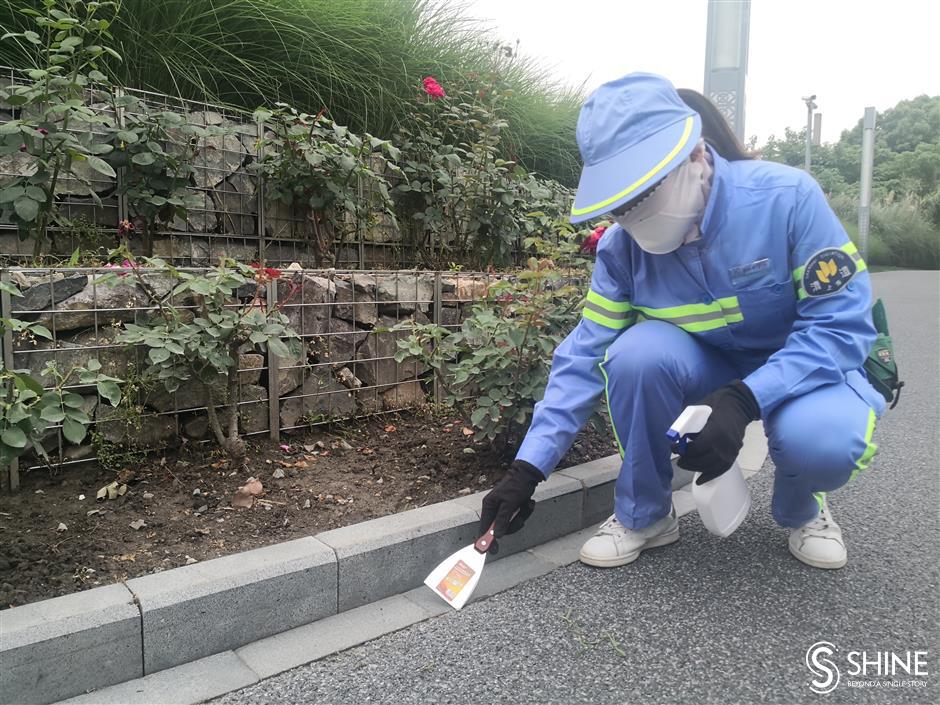 Sanitation worker Zhang Ying uses a blade to clear garbage at the south riverfront area of the Huangpu River on Wednesday.

Efforts are rolling out across the city to reach the target of 70 areas and roads that are “clean enough to sit on” this year with the application of intelligent technologies, Shanghai's greenery authorities said.

These "supreme clean" areas and roads will cover 4.4 million square meters, accounting for about 2.5 percent of the city's sanitation and cleaning areas, the Shanghai Greenery and Public Sanitation Bureau said.

In Huangpu District, a variety of vehicles are being used to clean streets.

Ding Bitang, a sanitation worker in the south riverfront area of the Huangpu River, takes 20,000 steps during his working day.

The area includes part of the 45-kilometer Huangpu River riverfront greenway, known as the “No. 1 municipal greenway," which features a variety of flowers and beautiful river views. With walking, jogging and cycling tracks, it has become a popular getaway for residents and tourists.

Ding used a road sweeping machine to clean the ground on Wednesday.

"The machine is mainly used to remove leaves and food packages, the most commonly seen garbage on the road," said Ding.

The machine, which was introduced two years ago, "significantly relieves our workload," he said.

Zhang Ying was using another sweeping machine to clean the ground.

"The electronic machine has a water tank and the water spray can help curb falling dust," Zhang said. "It can reach dead corners and clear cigarette butts and dirt.”

She uses the machine every 30 minutes when she patrols the areas.

She also has a variety of tools including as a blade to clean small areas.

"I use the blade to remove grass and chewing gum which cannot be cleared by machines," she said. 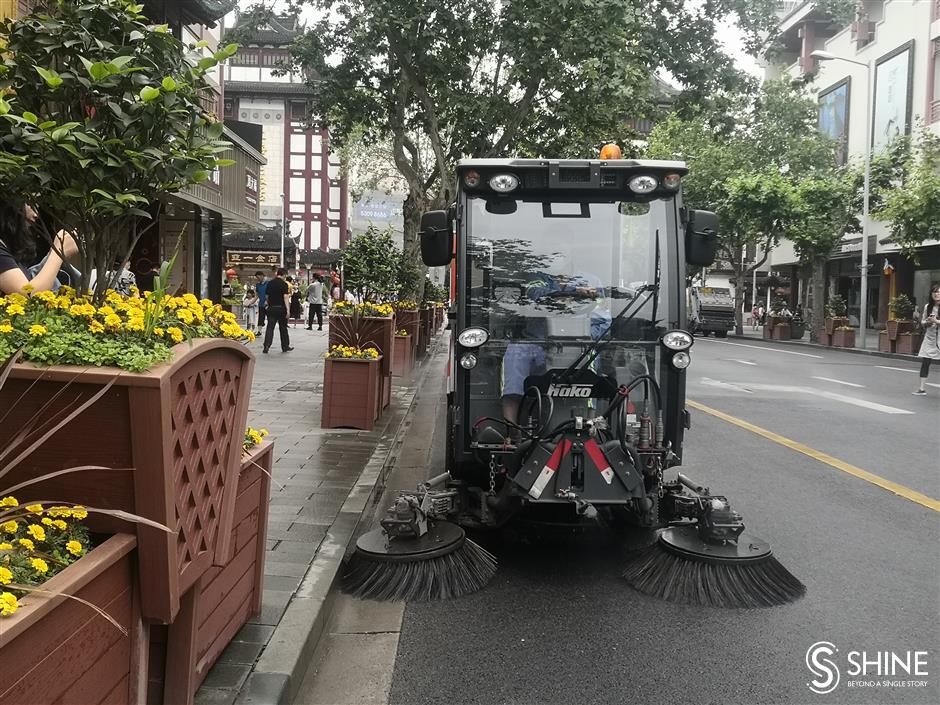 A sweeping vehicle in operation at the Yuyuan Garden tourist attraction.

The south riverfront area of the Huangpu River has a lot of visitors during the day so the in-depth sanitation work is conducted at night, said Zhang Ming, deputy manager of Shanghai Xinwang Environment and Sanitation Service Co.

"A variety of small machines such as sweeping and washing vehicles are used to meet refined sanitation requirements," he said.

"The most expensive machine is worth more than 1 million yuan (US$139,860) and has more than 20 functions, such as road sweeping, weeding and water spraying," said Zhang.

"The aim is to ensure there is no dirt or dust on the roads at all and they are to clean that people can sit on them directly," he said.

At the Yuyuan Garden tourist attraction in Huangpu District, machines are replacing traditional cleaning methods. Sprinklers, sweeping vehicles and washing vehicles are used to clean an area of 57,965 square meters.

"On smooth roads, machines are used most of the time instead of brooms, which are used on cobbled roads which are uneven," he said.

”Different machines and vehicles are used to clear different types of trash like grease, dust and food packages," said Wang.

In the early morning, sanitation workers will use brooms to sweep roads, and then they will use tools to clear chewing gum and stickers which are hard to remove and clean road gaps and corner areas. They also use different machines to wash and clean streets day and night.

"The goal is thorough and refined cleaning in the Yuyuan Garden tourist attraction," said Wang.

In Huangpu District, nine model areas of sanitation, including Huaihai Road M., Nanjing Rd W. and Yuyuan Garden, have been set up with the experience there promoted across the district. 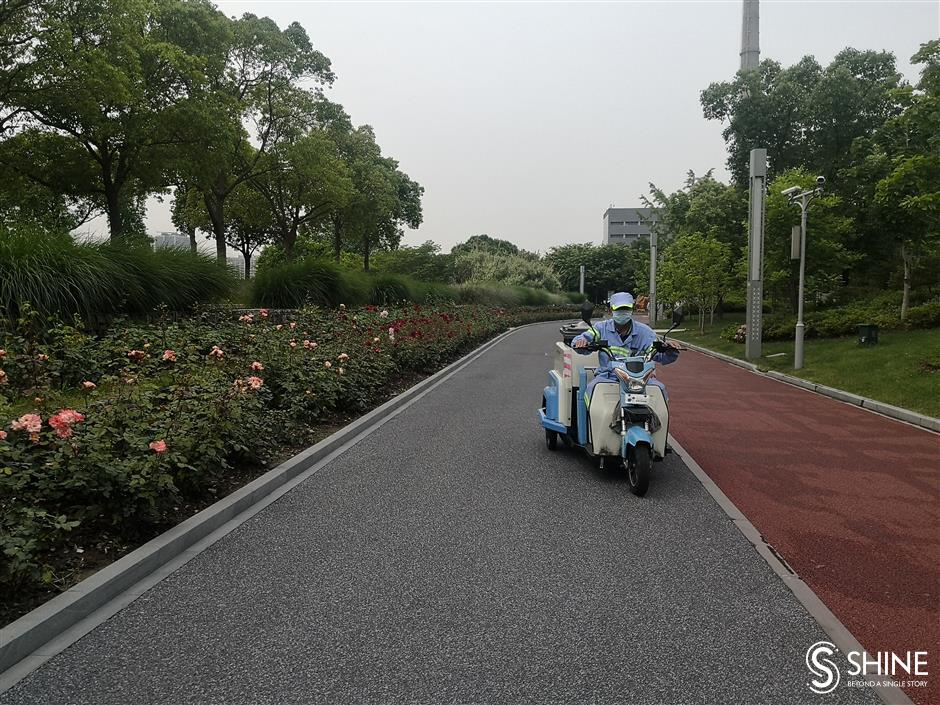 A sanitation worker on patrol at the south riverfront area of the Huangpu River on Wednesday.

The 70 areas and streets that are clean enough to sit down on represent the highest standard and best level of Shanghai's cleaning work and the city's pursuit of excellence, the sanitation bureau said.

Between 2021 and 2025, there will be 320 such areas and roads with space amounting to 31.15 million square meters, or 15 percent of the city's total sanitation area, according to the bureau.

The cleaning standard of these roads and areas should be above the top-level cleaning quality standard and service requirement of roads, public squares and affiliated public facilities in the city, said Li Qianqian, deputy director of the bureau’s road sanitation department.

"They represent the highest standard of refined sanitation," said Li.

Specifically, there should be no trash, dirt, stains or water on these roads and areas, and they should look as if they have been just washed, the bureau said.

The areas above the standard should include major tourist attractions, business areas, transport hubs, key roads and nearby areas, "beautiful block" areas and areas where large events will be hosted, the bureau said.

To achieve the target, district sanitation workers are using a combination of vehicles and equipments such as road pollutant removing vehicles, washing machines and dust cleaning vehicles to improve efficiency, the bureau said. 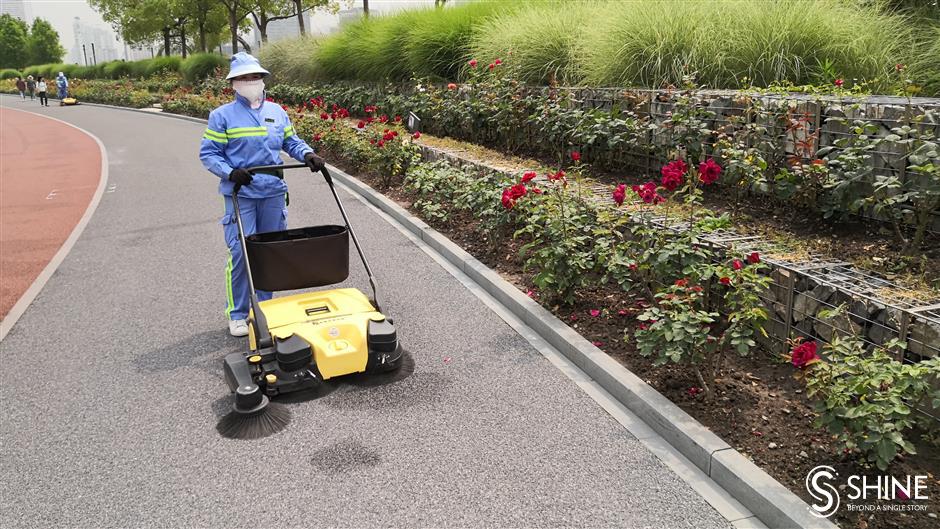 Zhang Ying use a sweeping machine to clean the south riverfront area of the Huangpu River on Wednesday.

In Qingpu District, decontamination vehicles can thoroughly remove dirt, grease and other pollutants, while various sweeping machines are used in Huangpu District to clean streets efficiently, the bureau said.

Other districts, such as Yangpu, Xuhui and Songjiang, are using the combined techniques of humans and machines to improve the cleanliness of roads and areas, according to the bureau.

At the Changfeng Park area in Putuo District and North Bund area in Hongkou District, intelligent road sweeping vehicles relying on 5G and AI technologies will be used, it said.

A rapid response and handling management mechanism has been established to tackle sanitation and environment problems within 15 minutes in the city, the bureau said.

Third-party supervision and management and motivation mechanisms have also been set up to ensure long-term sanitation, it said.

Reviews will be conducted, the bureau said. 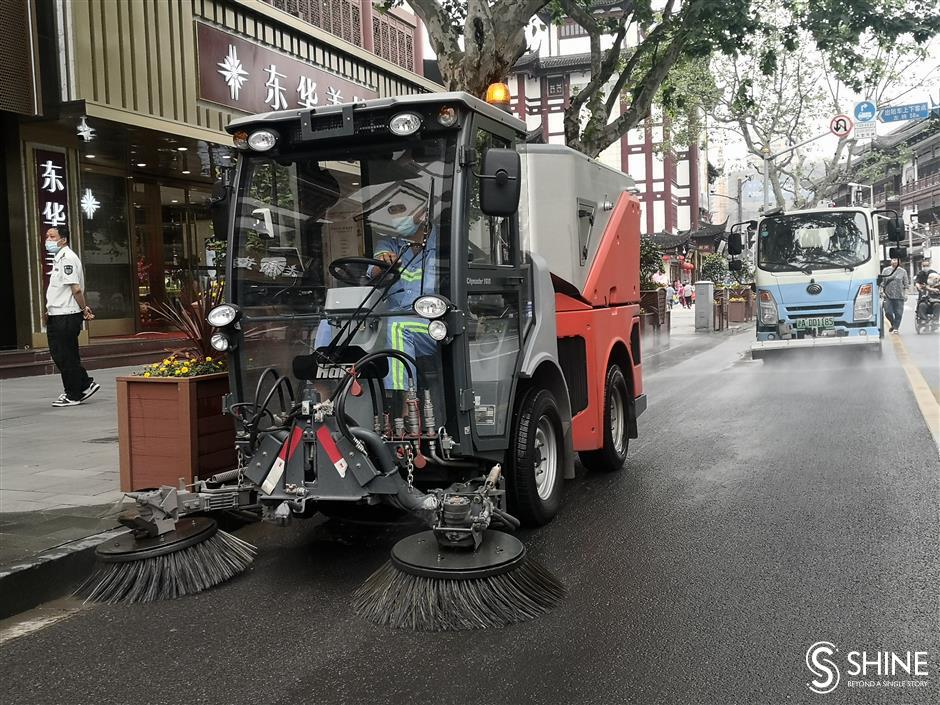 Sweeping vehicles at work at the Yuyuan Garden tourist attraction on Wednesday.