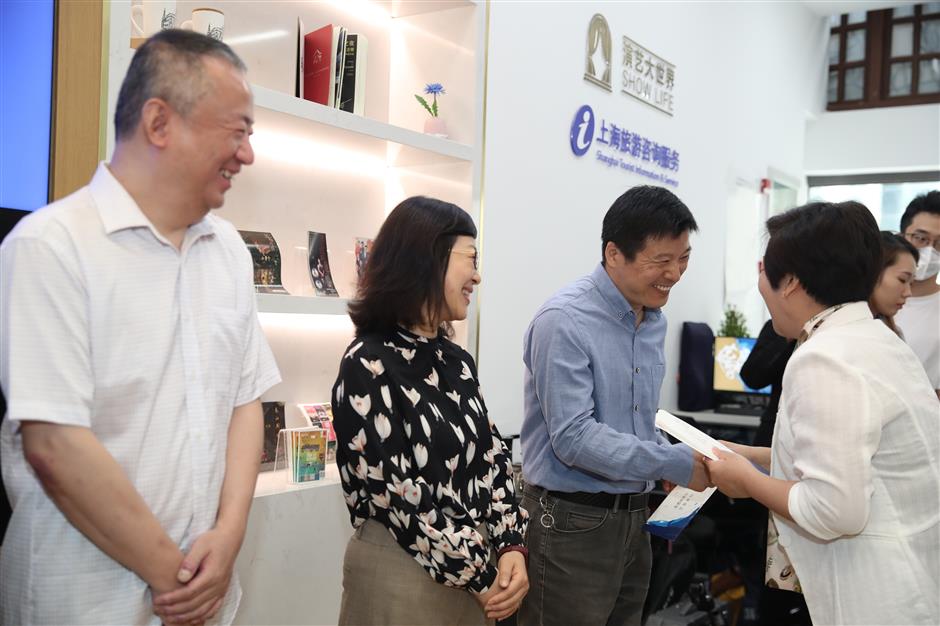 A Huangpu District official presents free art performance tickets to representatives of local medical workers, police and volunteers who fought against the COVID-19 on the front line.

Curtains are rising again at downtown theaters after shows were suspended for over three months due to the novel coronavirus outbreak.

Major theaters and cultural venues within Show Life, a Huangpu-based theater and art performance zone, jointly announced on Friday that they were ready to welcome audiences, with full COVID-19 prevention measures.

The zone includes the most popular downtown art venues such as the Shanghai Grand Theater, Great Theatre of China, Shanghai People Theater and Shanghai Culture Square.

The musical “Kiki's Delivery Service,” developed from the popular Japanese animated film, will also be presented on Friday night at the Shanghai People Theater.

Famous comedians Mao Mengda and Shen Ronghai will perform the Shanghai talk show “Laughter in Shikumen” at the historic Great Theatre of China on June 6.

The theater, formerly the San-Xing Theater, at 704 Niuzhuang Road, was built in 1930 as one of the city’s four major Peking Opera venues.

Changjiang Theater, built in 1923, will present a traditional cross-talk show and Suzhou-style storytelling, as well as singing and dances from popular group AKB48 SH Team.

The performances have already proven popular among local audiences. All tickets were sold out within three minutes for the debut concert of “2020529 & 2020530.” Audiences left messages on the organizer’s social media accounts to cheer them during the difficult times and say they are looking forward to reopening. 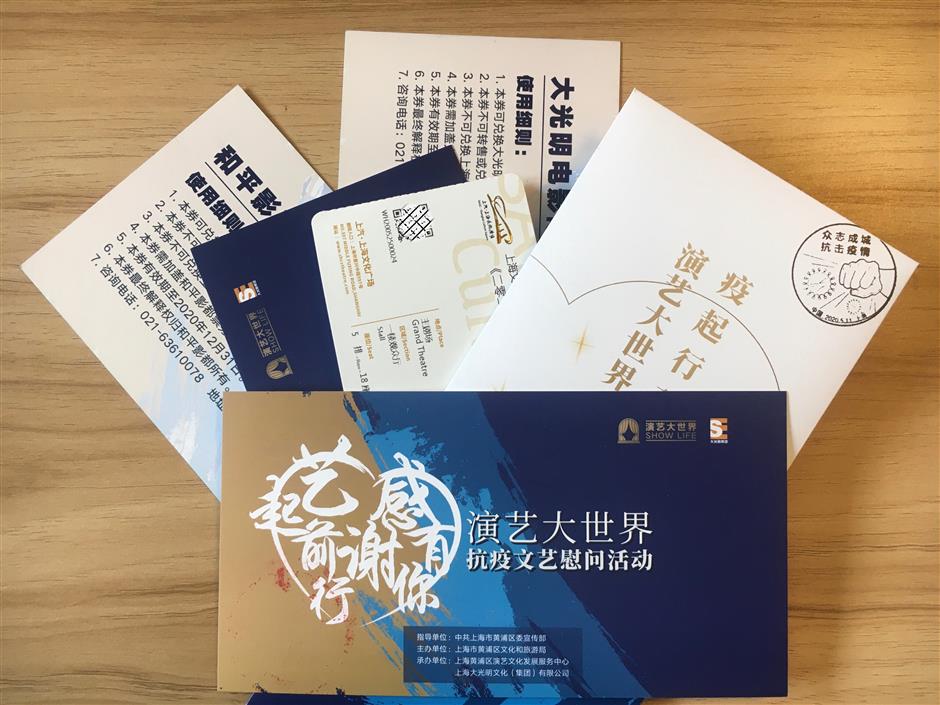 Free art performance tickets at Huangpu culture sites for local medical workers, police and volunteers who fought against the COVID-19 on the front line.

The Show Life launched a series of outdoor performances at downtown landmarks starting last week as a warm-up for the grand reopening.

A nightlife event featuring outdoor bazaars, food stalls, art exhibitions and other cultural events are being held at the historical Sinan Mansions every weekend through June. The "Sinan Yé," or Sinan Night activity, with six sections — bazaar, eatery, art house, concert, reading party and museum — is part of efforts to boost the city's nightlife economy.

Local art and cultural performances and activities have been suspended since the novel coronavirus outbreak in late January. As the pandemic wanes in China, the State Council has released a guideline on the gradual reopening of theaters and other indoor cultural venues. 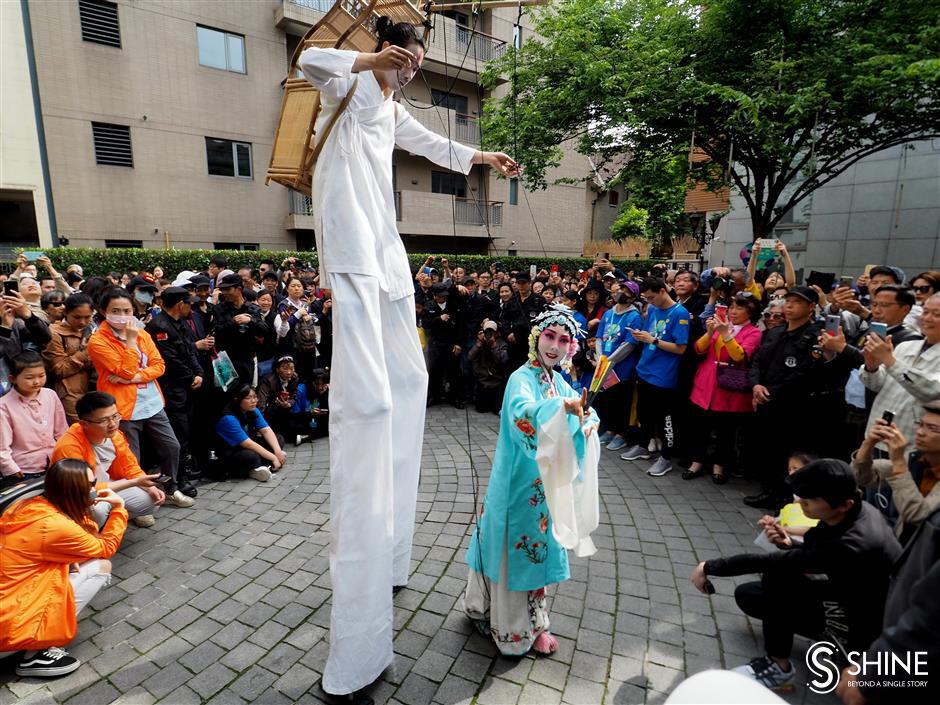 An art performance at Sinan Mansions attracts a crowd.

To ensure safety, audiences are required to wear masks, check temperatures, show their health code and register their identity before entering the theaters.

Theaters will also strictly follow the regulations of local authorities to limit the number of audiences to 30 percent of capacity.

A maneuver has been launched at the Shanghai People Theater to check the safety of the queuing area, temperature checkpoints, entrances, seats and evacuation routes.

The Shanghai Culture Square has prepared abundant prevention gear such as masks and gloves at public areas such as toilets and lounges. A thorough disinfection will be conducted before and after every performance.

Two medical workers will stand by for each show at the culture square. Those feeling uncomfortable or showing symptoms of illness will be led to specialized areas to receive further medical checks.

Meanwhile, the Show Life presented 5,000 free tickets to medical workers, police, social workers and volunteers who fought against COVID-19 on the front line. 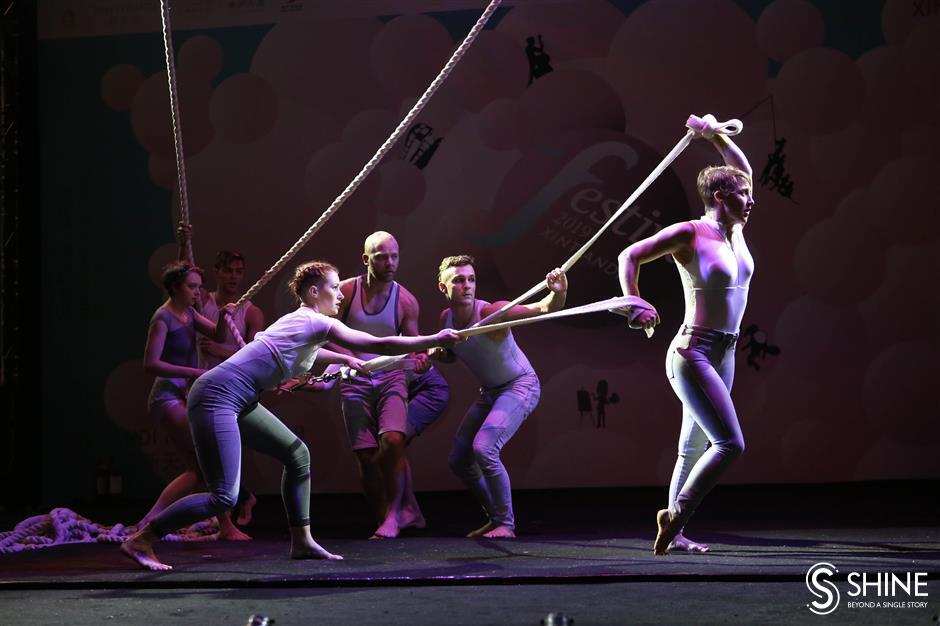 An art performance from an Australian troupe at Xintiandi.