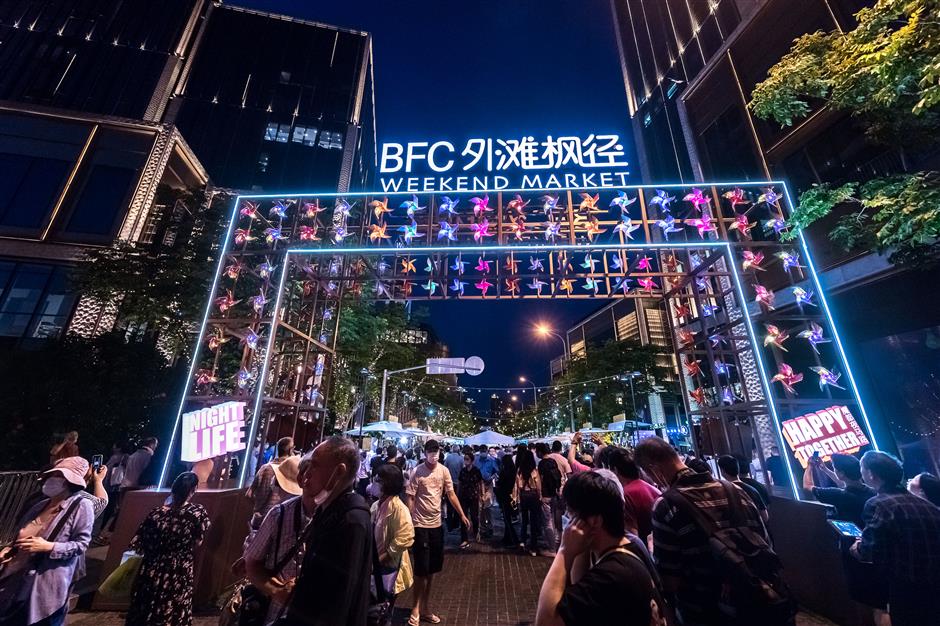 New pedestrian streets markets on the Bund proved popular on Saturday — the beginning of the city's Double Six Nightlife Festival.

Offering a rare chance to eat, shop and watch art performances outdoors on the Bund, the new Fengjing Road Weekend Market is a nostalgic throwback to when the city was known as the "Paris of the Orient" more than half a century ago.

The 150-meter-long road near the Bund Finance Center (BFC) along the Huangpu River is closed to traffic between 7pm on Fridays and 5am on Sundays through January 3 to allow entertainment, shops and food stalls. The BFC Bund Fengjing Market will run between 10am and 10pm every weekend.

Shanghai is reviving its nightlife after shutting down noisy late-night bars and eateries over the past few years in response to residents’ complaints. The revival is part of efforts to become an international shopping destination and boost consumption after the COVID-19 outbreak.

"The weekend market is expected to drive the city's vitality and consumption power," said Eric Chan, chairman and CEO of the Fosun BFC, the organizer of the Fengjing Road market.

"We'd like to develop the venue into a new calling card of Shanghai, where customers can enjoy the Bund architecture, and taste delicacies from across the world," said Chan. 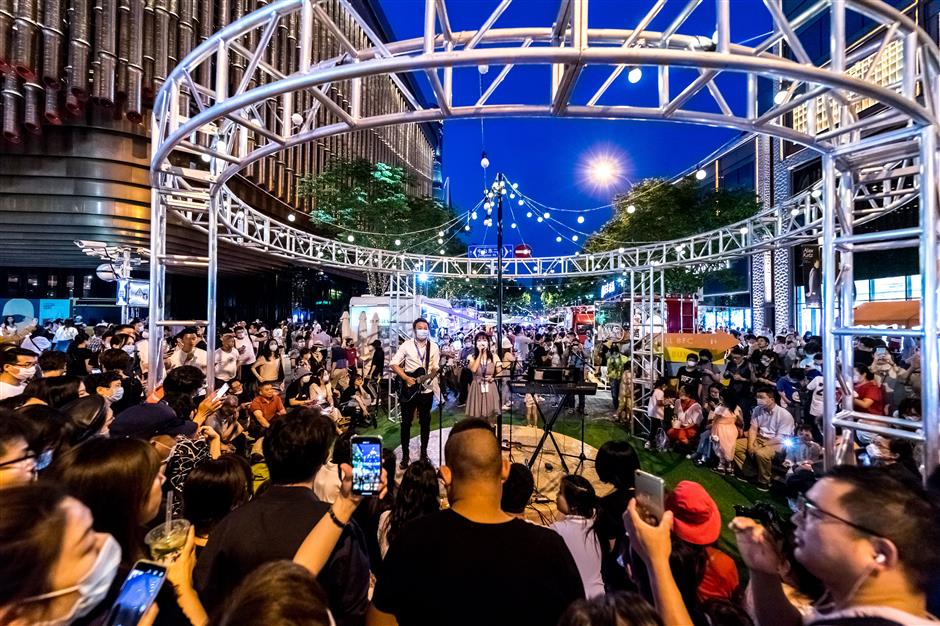 The venue features over 110 street stalls as well as performances. Both Fengjing Road and paths around BFC Square are flanked by stalls operated by local eateries and bars. They offer barbeque food, beer and snacks, while other stalls sell a variety of products along with games and performances.

Street artists, popular bands, jazz concerts and various pop-up performances are being held across the market.

As a highlight, the 200-square-meter rooftop garden of the BFC, known as "the terrace with the best view in Shanghai," has been opened to visitors to the market. Four outdoor parties will be held every month with beer and music.

"The scenery at the landmark venue is amazing," said a citizen surnamed He, who visited the market with his friends on Saturday. "It is a quite rare site in Shanghai with the best environment, scenery and reasonable price."

Visitors can also watch a popular art exhibition by famed artist Alex Katz at the Fosun Foundation art center beside the market. Born in 1927, Katz is an American figurative painter known for his large-scale simplified images of friends and family. More than 30 of his masterpieces are being exhibited at the center.

In accordance with post-pandemic health and safety guidance, stallholders are required to present licenses and certificates as well as wear masks and gloves. The organizer has also released strict sanitation and garbage sorting rules.

"Safety is always the priority," said Yang Bokai, who is in charge of the market. Two health stations have been set up on both sides of the road with disinfectant, masks and wet tissues for visitors. The number of people will also be restricted in line with anti-coronavirus concerns.

The organizer has also prepared raincoats in case of bad weather, while allowing free parking at the BFC garage during the market. 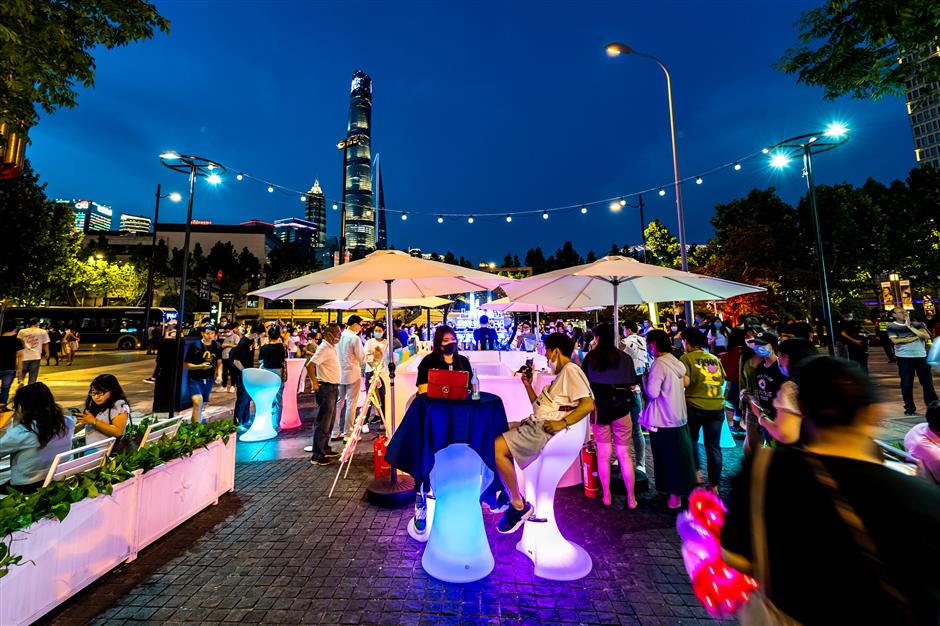 Visitors enjoy food and drink at the Fengjing Road Weekend Market on the Bund on Saturday night.

Also on the Bund, another night market was unveiled on Yuanmingyuan Road on Saturday night, featuring graffiti art and street performances in addition to food and wine.

The Waitanyuan Night Carnival is held between 5pm and 9pm through June 14.

During the night market, the pedestrian-only section of the street features a dozen recreational vehicles featuring graffiti created by artists from across the world. Visitors are invited to paint on one of the vehicles.

Selected eateries and brands, such Starbucks Reserve and Jordan, invite customers onto the vehicles to have a drink or choose souvenirs and jewelry.

The area is home to famous buildings such as the old British Consulate, the Union Church and the Peninsula Hotel. The road dubbed the "most beautiful backstreet on the Bund" is flanked by the city's earliest western architecture in the renaissance, neoclassicism, eclecticism, art-deco and modernism styles.

The strategy paid off soon. The road received some 190,000 visitors during initial operations from August 17 to September 8, 2019, according to the Huangpu District government. 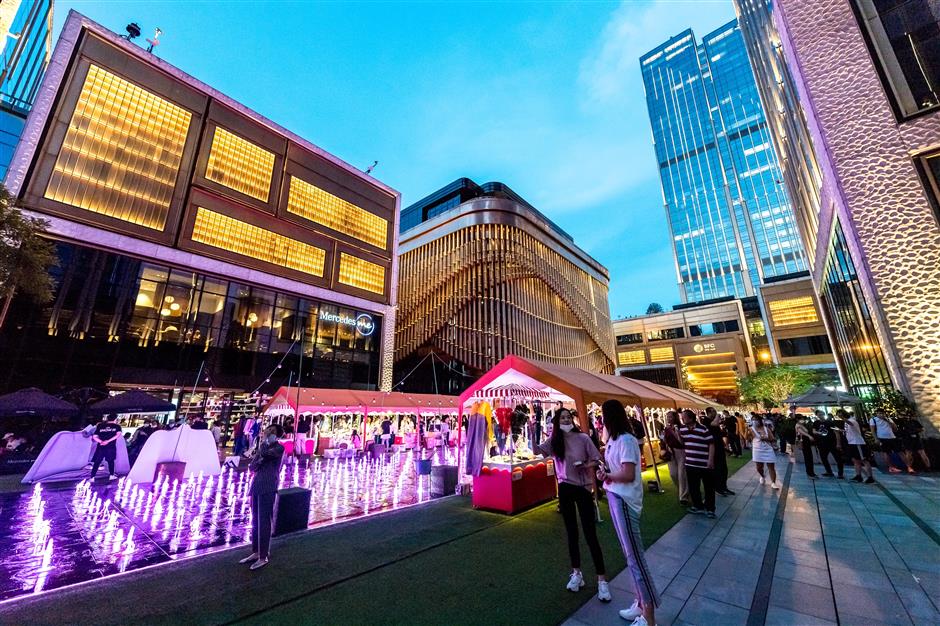 A path at the Bund Finance Center is flanked by stalls selling innovative products for the weekend market. 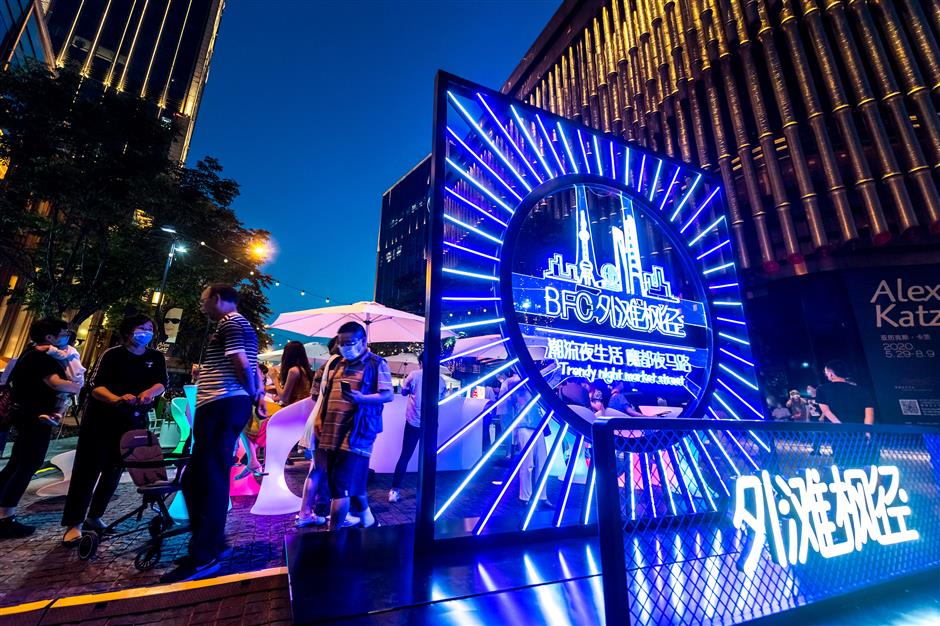 A customer practises basketball at the Yuanmingyuan Road night market on Saturday. 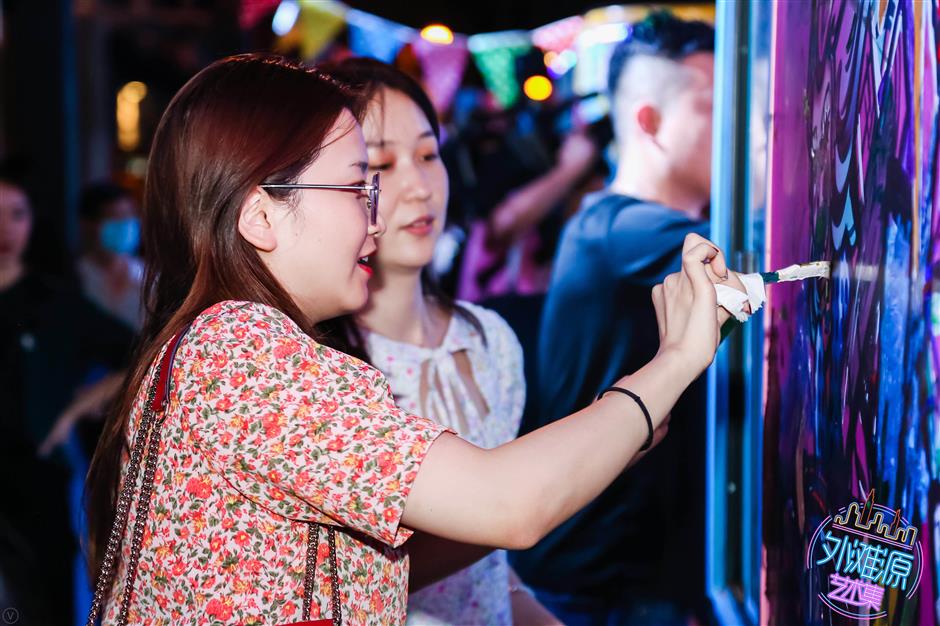 Visitors paint  a recreational vehicle at the Yuanmingyuan Road night market on Saturday.