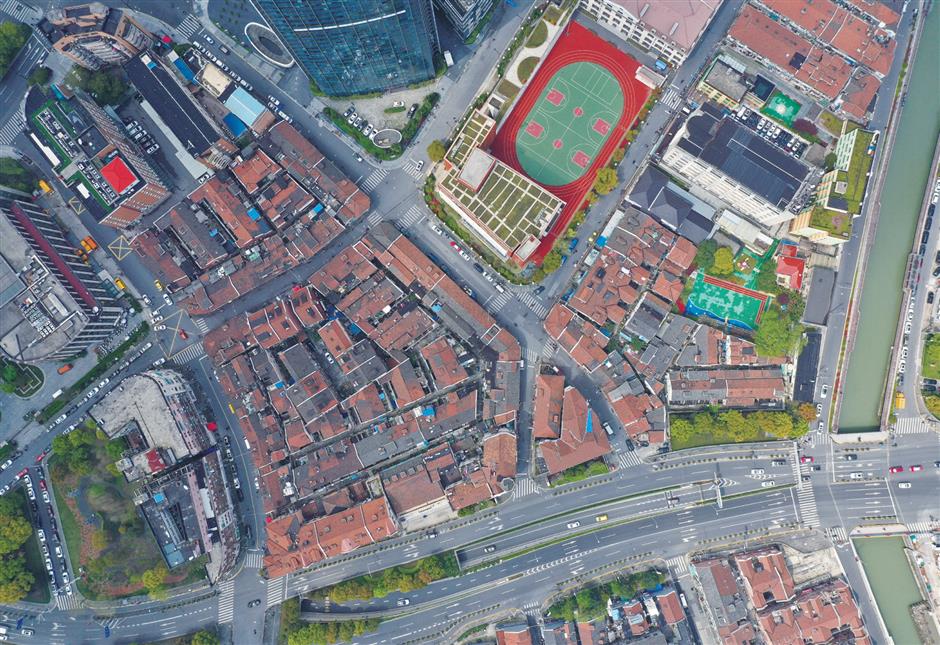 A bird’s-eye view of Shanshouli neighborhood in Hongkou District, which will undergo a facelift amid a new round of redevelopment on the Huangpu River waterfront. More than 2,500 households will be moved out to better living conditions.

The Shanshouli neighborhood is well-known in Hongkou District for its well-preserved lane-style community. It became famous nationwide after popular television series “I Will Find You a Better Home” shot several scenes there.

Now over 2,500 resident households will be relocated from this historical North Bund neighborhood because a new round of redevelopment on the Huangpu River waterfront is underway to preserve its cultural heritage.

The official relocation campaign was launched on June 4 on the old lane-style neighborhood built in the 1920s, when 98 percent of the residents signed contracts to get a cash subsidy from the government to help them move to pastures new.

Most of the residential houses in Shanshouli, covering 110,000 square meters on Jiulong, Daming, Wuchang and Hanyang roads in Hongkou, will be protected after the residents move out.

There are four historic sites within the neighborhood, which are under protective status. They include the former site of the Communist Party’s Tanggu Road Secret Radio Station; a historical ironmongery and electromechanical company warehouse; the former site of Hongkou Police Station and a historic church built in 1870.

On a North Bund map, Shanshouli neighborhood resembles a butterfly sitting in the core area of the waterfront. The district government plans to turn it into a central activity zone and a “new engine” for Shanghai’s future development.

“The neighborhood has retained much of Shanghai’s old vibes but residents are actually eager to get relocated due to poor living conditions,” said Zhang Qiurong, Party secretary of the Tanghan Neighborhood Committee of Beiwaitan, or the North Bund, Subdistrict.

Residents are living in cramped quarters, using chamber pots and coal stoves. They have to share kitchens and bathrooms because of the limited living space.

Li Jinfeng, a resident at 124 Tanggu Road, has been living in a 9.8-square-meter room with her son for over two decades. She cooks in a corridor and shares a bathroom with her neighbor. 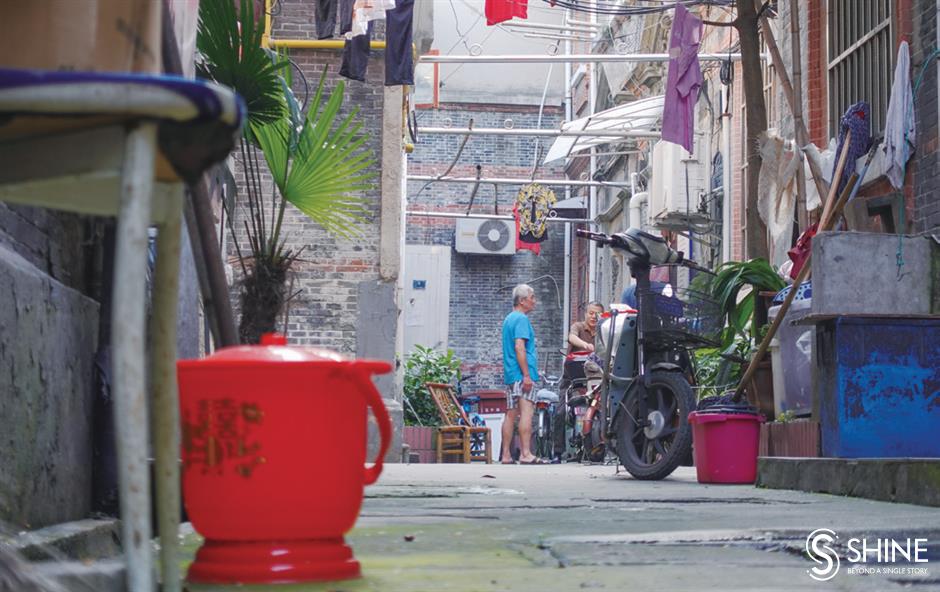 Residents chat in the Shanshouli neighborhood. Living conditions are poor in the dilapidated quarters with some still using chamber pots.

“I will abandon most of the old furniture and belongings to prepare for the relocation,” said Li.

Despite the limited space, Li arranged her apartment in order: A refrigerator, two beds and a foldable table are placed in the “living section,” while an overhead cable creates a “cloth section” to hang clothes.

“It is a good opportunity for the new North Bund development and a new chance for me to start a new better life,” Li said.

Zhang revealed that many residents had called and signed contracts in preparation for their relocation package last month.

To avoid infection during the novel coronavirus pandemic, the relocation office created a non-contact method to communicate with and explain policies to residents, revealed Liu Feng, general manager of the relocation affairs office.

According to the policy, all households will receive cash subsidies so they can purchase other properties.

Most of the residents are seniors and have resided in poor living conditions, so the relocation office tried to figure out the best compensation measures for each household.

A senior couple over 70 years old with a disability, for instance, refused to move at the beginning because they’d been accustomed to living close to Shanghai General Hospital. But they soon agreed a deal after staff explained the relocation would be beneficial to their welfare.

The overall plan reveals 6,000 residents will be relocated eventually from old North Bung neighborhoods by the end of the year.

Cheng Jun, director of the Hongkou Urban Planning and Natural Resources Bureau, made it known Shanshouli houses will be protected along with the nearby waterways to preserve the city’s architectural style of the 1920s.

After the residents’ relocation, the remaining structures will undergo renovation and will be reborn as a gathering place for fashion and new brands.

Many historical structures in the North Bund region have been preserved and turned into cultural venues. They include the Shanghai Jewish Refugees Museum, which incorporates the historic Ohel Moishe Synagogue; the Dock Culture Museum and the China Securities Museum, renovated from the famous Astor House Hotel. 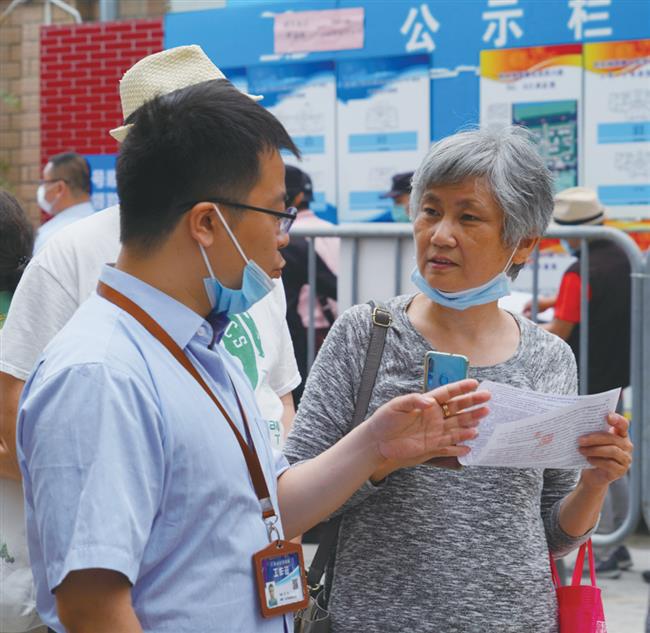 A resident consults an official on the relocation process.

The Yung Shine Warehouse, known as the largest storage site in the Far East, dating back to the 1930s, is now being converted into Shanghai Fintech Park.

Historical structures along the Hongkougang River, from which Hongkou got its name, will also get a facelift. A 3.4-kilometer riverside path along the river is already under construction.

The Chunyangli neighborhood on the North Bund, a shikumen (stone-gate) community built between 1921 and 1936, is being renovated, with some of the apartments rented to employees at nearby office buildings.

Riverside regions have already been transformed with greenery and walking paths.

Rows of shikumen residences are being restored, while some plots have been cleared to make way for the construction of skyscrapers that will reshape the city’s skyline.

The riverside region, covering about 4 square kilometers, will be on a par with the Lingang Special Area and the Pudong New Area in the city’s east, and the demonstration zone for the integrated development of the Yangtze River Delta region and the Hongqiao Business District in the west, said Wu Xinbao, Party secretary of Hongkou.

The North Bund will include a core central business district, with a high density of office buildings and commercial facilities, along with historical and cultural regions around the Tilanqiao and Hongkougang River, where the classical ambiance will be fully preserved.

“The North Bund will become a new landmark to lead the city’s north-south development axis and a new benchmark for urban development in the new era,” Wu said, adding that the district aims to make the region fully functional within five years, while waterfront redevelopment is due for completion inside 10 years.