Up, up and away for domestic regional jet 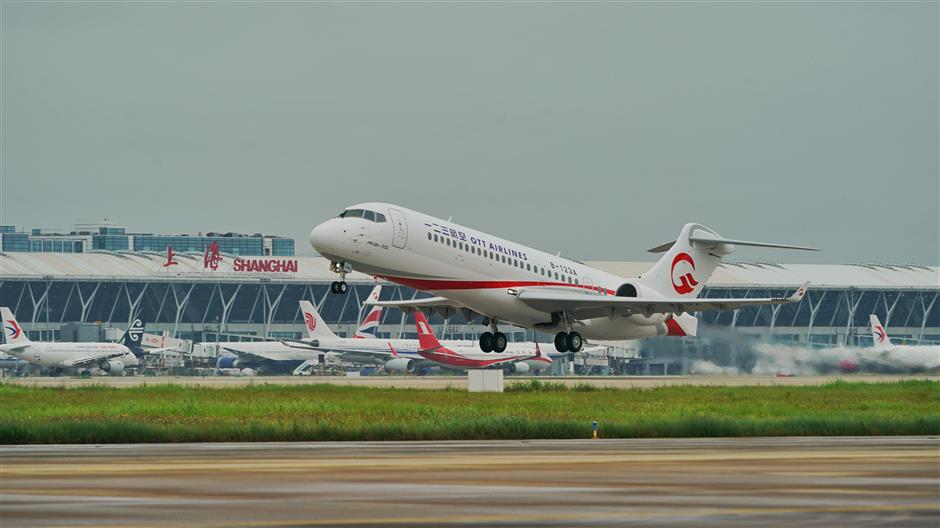 An OTT Airlines' ARJ21 takes off from the Shanghai Pudong International Airport on Sunday. 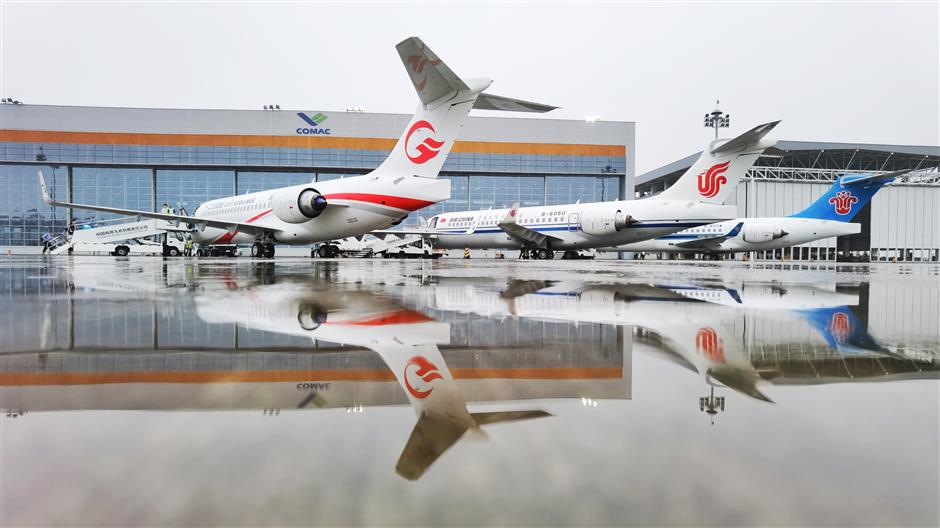 The first ARJ21s with OTT Airlines (left), Air China (middle) and China Southern at the Pudong assembly base of COMAC on Sunday morning.

The Commercial Aircraft Corporation of China, the jet's developer which is based in Shanghai, handed over three ARJ21s to Air China, China Eastern and China Southern at its assembly line near Pudong International Airport.

It is the first time the regional jet, which has a range of up to 3,700 kilometers, has entered the fleets of major international carriers, COMAC said.

COMAC plans to deliver another two ARJ21s to each of the three major carriers by the end of 2020. The nine jets are scheduled to start their commercial operations with the carriers by December, said Zhang Xiaoguang, marketing and sales department director with COMAC.

The total orders for the ARJ21 have been about 600 from more than 20 customers from both home and abroad, according to COMAC.

The delivery on Sunday was held on the same day the first ARJ21 began commercial operation with its first operator, Chengdu Airlines, on June 28, 2016.

Since then, COMAC has delivered 32 ARJ21s to Chengdu Airlines, Jiangxi Air, Urumqi Air and Genghis Khan Airlines. The planes link 55 cities and have transported more than 890,000 passengers safely. It began its first regular international duties between northeast China and east Russia with Chengdu Airlines in October last year.

"COMAC has made full preparation for flying, crew and maintenance for the deliveries to the three major carriers," said Zhang. "More than 700 staff, including pilots and crew members, have been trained."

All the first batch of three ARJ21s have the 90-seat all-economy configuration. The seats are wider and have larger spaces between each other, according to COMAC.

The three carriers will carry out a series of test flights before launching commercial operations. 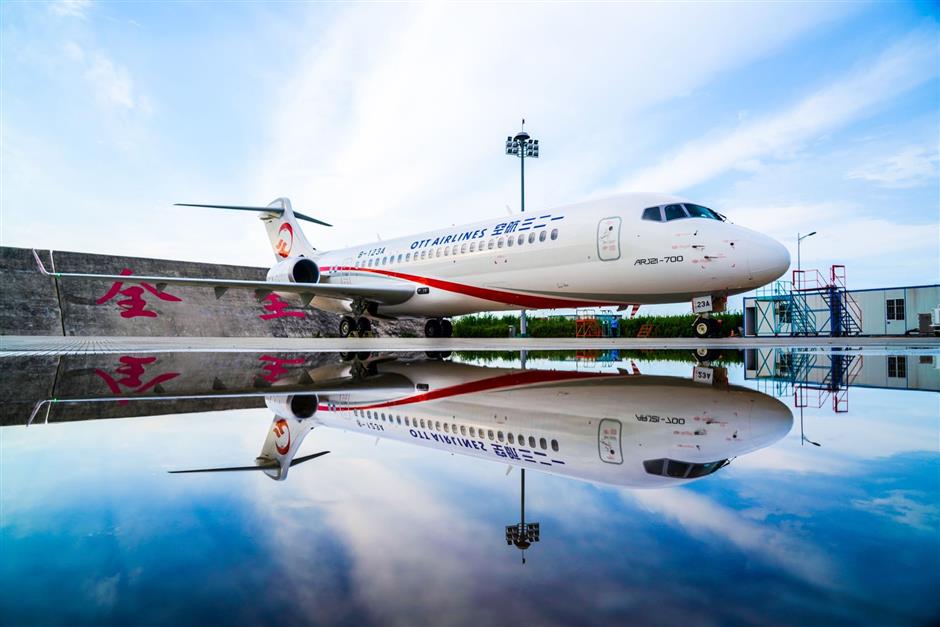 The Shanghai-based China Eastern has established a wholly owned subsidiary, OTT Airlines, to operate China's domestically developed passenger jets. Its fleet will be mainly composed of ARJ21 regional jets and C919 single-aisle aircraft, along with other Chinese-developed passenger aircraft.

After receiving the first ARJ21, OTT plans to initially carry out flight training and certification. It plans to acquire all certificates from the Civil Aviation Administration of China in September and then start commercial flights.

A crew of 141 members including pilots, flight attendants and other support staff, have been organized for the operation of the ARJ21s.

"I have always dreamt of serving customers on domestically-developed aircraft, and my dream will come true soon," said Pu Xiaoying, a flight attendant with OTT, who has been flying with China Eastern and Shanghai Airlines for 17 years.

China Southern plans to launch its emergency evacuation certification on Sunday night. It will begin its first commercial route between Guangzhou and Chaoshan in south Guangdong Province on July 15.

The Guangzhou-based carrier will receive all the 35 ARJ21s by 2024.

Air China will operate the first ARJ21 between Beijing and Xilinhot city in northern China’s Inner Mongolia Autonomous Region by early July. The other ARJ21s of the nation's flagship carrier will also be deployed on routes between the capital and Inner Mongolian cities.

The delivery of ARJ21s, which acquired certification in December 2014, has been more frequent since its second assembly line at COMAC's Pudong manufacturing base was launched in March.

COMAC plans to manufacture 30 ARJ21s annually with the production lines in Pudong and the Dachang airport in Baoshan District.

On June 10, COMAC delivered three ARJ21s to Chengdu, Jiangxi Air and Genghis Khan Airlines. Another ARJ21 was delivered to the Chengdu Airlines on Sunday afternoon.

The average load factor of ARJ21 has increased to 75.6 percent from 60 percent in 2016, said Tang Jin, president of Chengdu Airlines. Twenty ARJ21s have transported more than 830,000 passengers with the airline.

"The original target was to ensure the ARJ21 flew safely, but now we focus on both safety and benefit," said Tang. The airline operated the first cargo flight of an ARJ21 on June 13 to transport 5 tons of cargo.

COMAC has also unveiled the CBJ business jet, based on the ARJ21, to better compete with rivals. 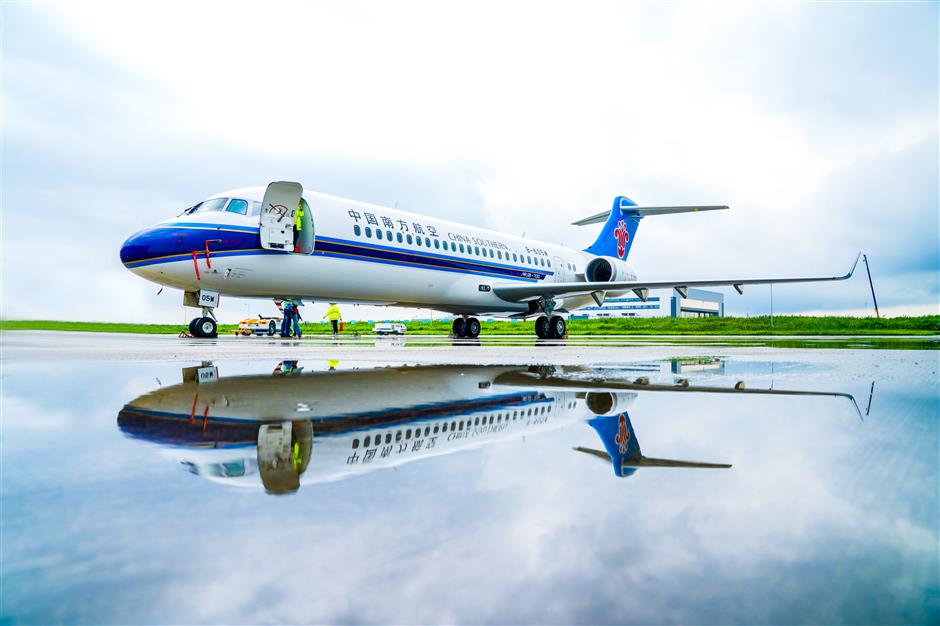 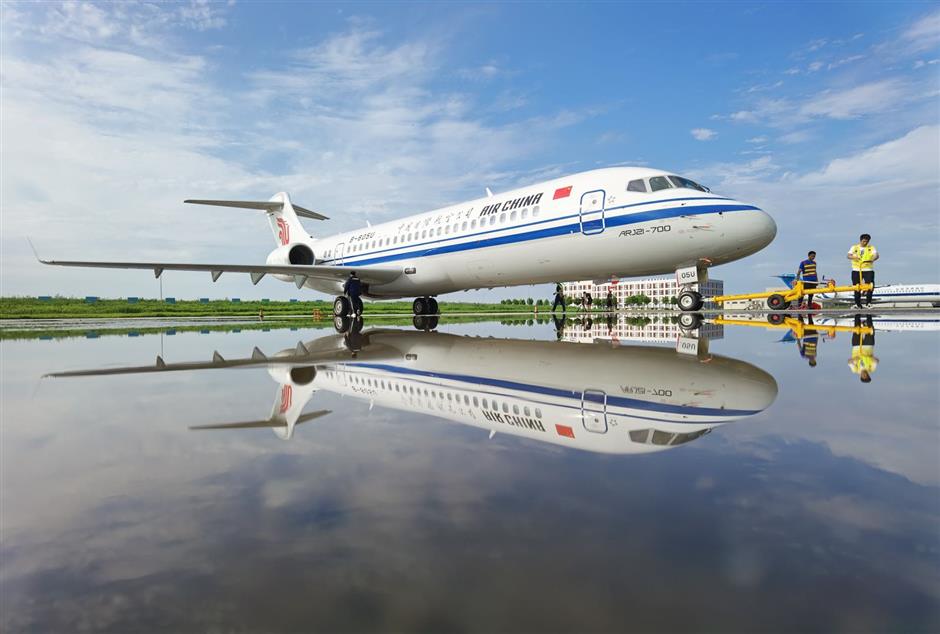