The Shanghai Proton and Heavy Ion Center teamed up with the Shanghai Eye, Ear, Nose and Throat Hospital on Wednesday to administer non-invasive heavy ion radiation therapy on a patient with choroidal melanoma, a cancer that affects the eyes.

It was the nation’s first such treatment for a patient with eye cancer.

The center, which uses proton and heavy ion beams to target and kill cancerous tissue without harming healthy tissue and cells, is the first facility of its kind in China and only the third in the world.

Choroidal melanoma can affect the middle-aged and elderly, leading to vision problems that may necessitate removal of an eye to prevent the cancer spreading. Such surgery can seriously damage a patient’s physical and psychological wellbeing, doctors said.

The patient surnamed Chen started to suffer sudden vision loss in the right eye months ago and checks was diagnosed with the cancer. Doctors suggested on operation to remove the eyeball or radiation while keeping the eye.

Doctors at the Shanghai Proton and Heavy Ion Center accepted the case and designed a radiation therapy plan. Chen received the first of five radiation treatments on Wednesday.

Choroidal melanoma is the second leading eye cancer in China. It has no significant symptoms in the early stage but is very malignant and can cause retinal detachment, doctors said.

“Choroidal melanoma needs individualized treatment, which has different therapy plans concerning to the cancer size, position, growth speed, vision and patient’s physical condition,” Kong said. “Eyeball removal was the standard treatment in the past. Now it is not the top choice in developed countries, which choose non-invasive radiation as an important therapy.

“Proton and heavy ion are the advanced radiation treatment technologies with better cancer-killing effects and smaller side effects than normal radiation. Through heavy ion radiation, patients can keep their eyes,” Kong said.

The eyeball positioning and tracing equipment used in the treatment was developed by the center. With the equipment, doctors can have more precise positioning before treatment, better vision for the patient during treatment and real-time monitoring on the eyeball during radiation to ensure treatment effects. 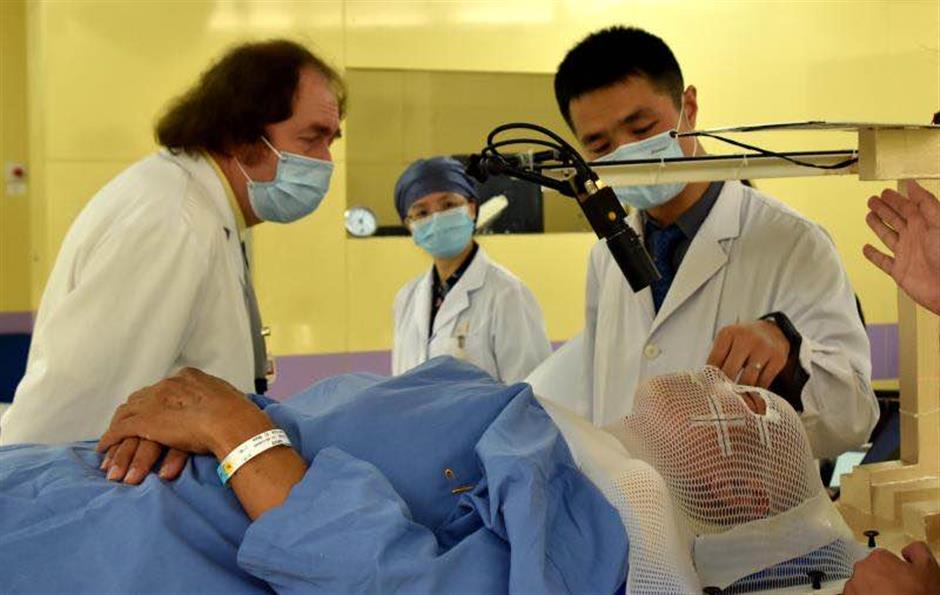