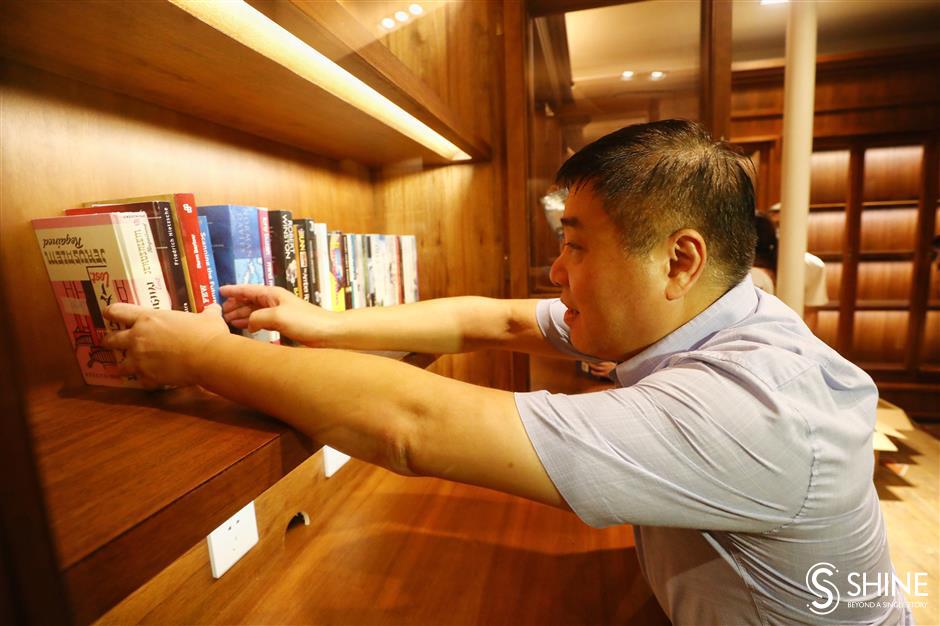 Chen Jian, curator of the Shanghai Jewish Refugees Museum, puts books donated by Kurt Wick on a shelf in a new library on the third floor of the Ohel Moishe Synagogue.

Kurt Wick, a Jew who took refuge in Shanghai during World War II, donated thousands of books on Jewish history and culture to the Shanghai Jewish Refugees Museum on Wednesday.

The over 8,000 books collected by 82-year-old Wick are mainly on the history, culture, politics and economy of the Jews. Some cover the period when over 20,000 Jews who fled Nazi-occupied Europe found shelter in Shanghai.

They were brought to the museum on Wednesday night.

“I want to say thank you to Shanghai for saving us and my family,” Wick said. “I think the books would be useful in Shanghai because you have a lot of students and Jewish visitors.”

Many of the books are about the 2,000 years history of the Jews, the holocaust, their treatment by the Nazis and Jewish people’s experiences in wartime, Wick said.

The books, in English, Hebrew, German and other languages, will become the first batch of volumes for a new library in the museum in Hongkou District, said Chen Jian, its curator.

“The museum aims to play a bigger role in academic research and cultural exchanges, so the books are valuable to us,” Chen said. He said it would be impossible to purchase the books that Wick had spent his life collecting.

“The books will have special meaning for the museum and the exchanges between Shanghai and Jewish people,” Chen added.

The library will open to the public along with the reopening of an expanded museum soon, Chen said. 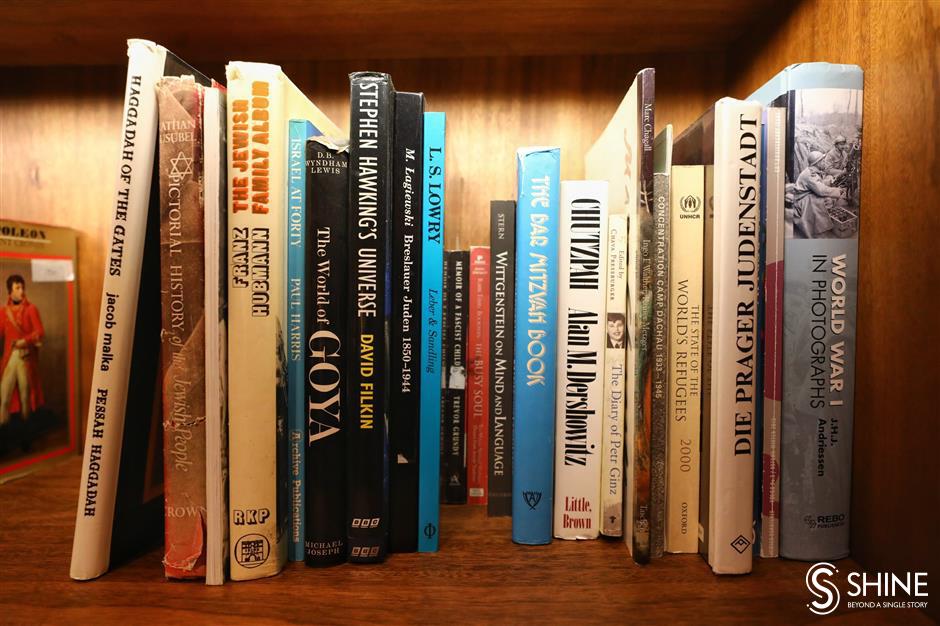 The over 8,000 books are mainly about the history, culture, politics and economy of the Jewish nation.

Wick fled to Shanghai from Vienna in 1939 with his parents and brother when he was just 1 year old. His parents opened a handbag shop on Dongdaming Road using a sewing machine they brought from home.

“It is a good place for the books and my parents would be happy for me to do that,” Wick said on Wednesday.

He moved to London in 1948 and continued in the handbag business his parents had started in Shanghai. He began collecting all kinds of books about Jewish history and amassed nearly 10,000 columes, filling every corner of his apartment.

After being diagnosed with lung cancer and undergoing an operation to cut out part of a lung, Wick decided to find a suitable place for his collection.

Wick visited the Shanghai museum last year with his wife, daughter and son-in-law. He was happy to find his family name Wickelholz on a wall along with the names of other Jewish refugees in the city. He also revisited the former site of his school and his home near Dongyuhang and Anguo roads.

“We lived on the ground floor of the third apartment building. I still remember the Shanghai-style tiger-claw stove and kept a bamboo stick used to exchange for hot water,” he recalled.

When hearing the museum was being expanded and its plans to build a library of Jewish history and culture, he immediately decided to donate his books to the museum.

“I noticed there were not many books in the museum, so I wanted to donate my collection here,” Wick said.

A company based in the Shanghai Pilot Free Trade Zone took on the task of delivering the books to Shanghai. The collection embarked on a cargo ship in early December 2019 but was delayed by the novel coronavirus outbreak early this year.

As the pandemic waned in China, the books arrived at a bonded warehouse in the free trade zone and were transported to the museum on trucks on Wednesday. 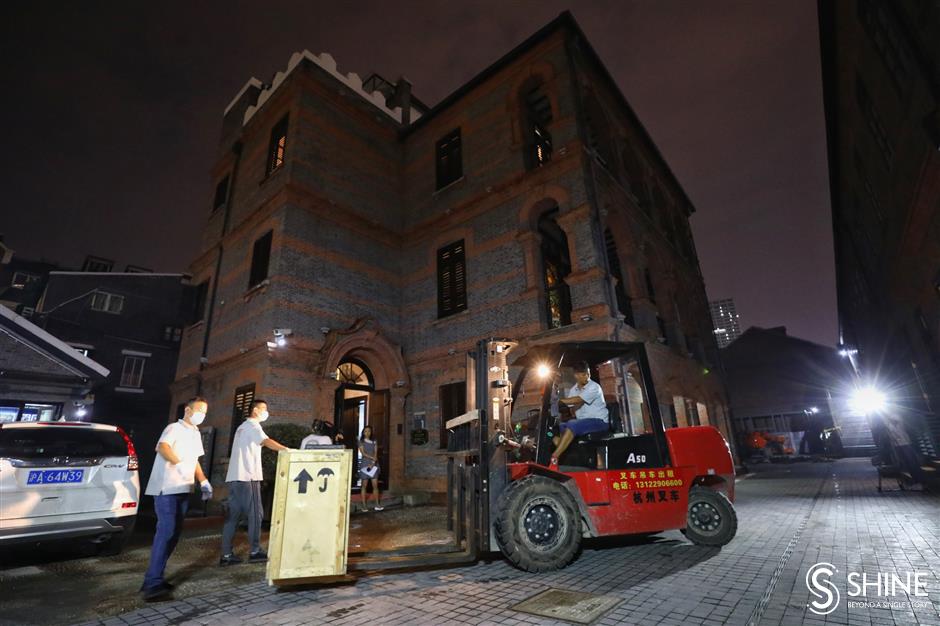 The books are transported to the Shanghai Jewish Refugees Museum on Wednesday night.

The expansion work is near completion and its total exhibits will increase to more than 1,000 from 150, thanks to donations from former Jewish residents in the city and their children, said Chen .

A wedding dress donated by Betty Grebenschikoff, a Jewish refugee who now lives in the United States, is one of the new exhibits.

Shanghai was a safe haven in the late 1930s and early 1940s for many Jewish refugees fleeing the horrors of Nazi Germany. About 23,000 Jews who fled Nazi-occupied Europe found shelter in the city.

Many lived in Hongkou District and established deep friendships with local residents who were suffering at the hands of the Japanese.

It has received over 400,000 visitors, including many former refugees and their families, from over 100 countries. The museum has also exhibited overseas in Germany, Israel, the US, Hungary, Australia, Switzerland and Italy. 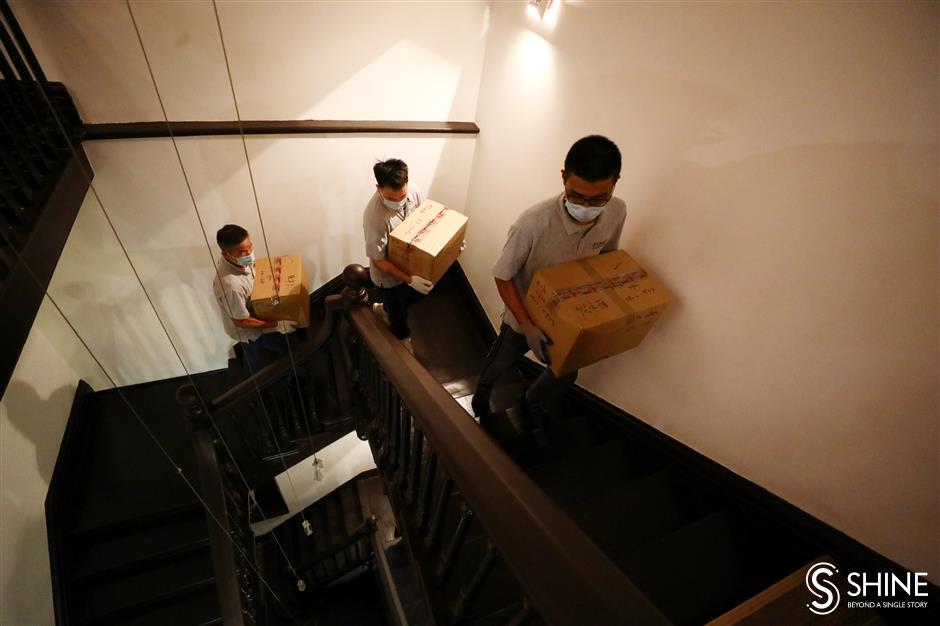 Volunteers carry the donated books to the new library at the Ohel Moishe Synagogue.