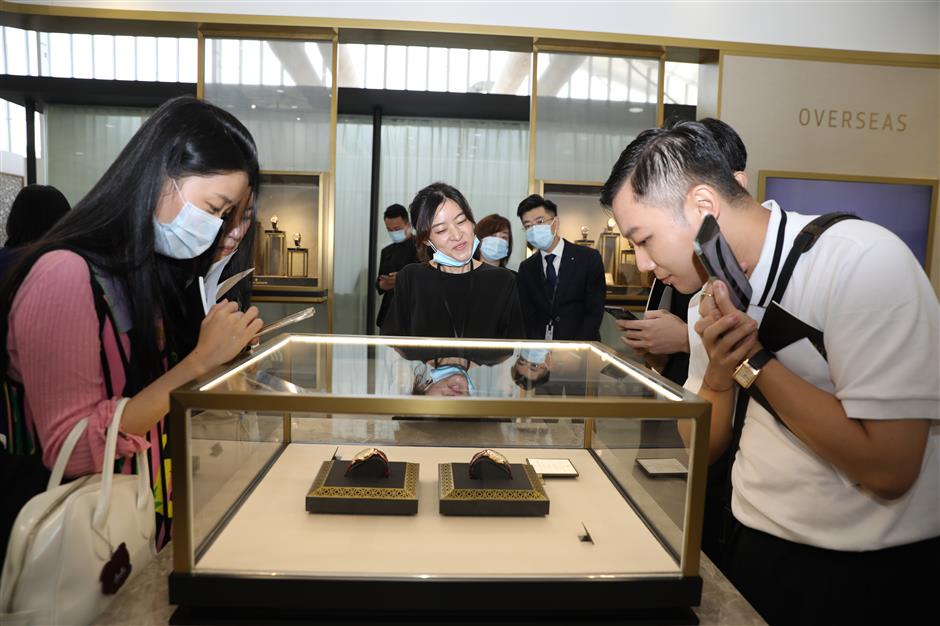 Visitors admire exhibits at the Watches & Wonders trade show at the West Bund Art Center in Xuhui District on Wednesday.

Eleven brands, such as Baume & Mercier, Cartier, IWC Schaffhausen and Vacheron Constantin, are exhibiting their latest products and those designed for the Chinese market. The fair runs through Sunday at the West Bund Art Center.

Amid the novel coronavirus pandemic, the number of visitors per hour is limited and only guests invited by the brands and organizers are admitted. The event features product launches, talks and panels as well as a workshop to display watchmaking and repair techniques.

This year’s fair was initially scheduled for April in Geneva, Switzerland, but was canceled due to the COVID-19 pandemic and then later converted to an online format. The event in Shanghai is an extension of the online exhibition, according to organizers.

“The Chinese mainland, especially Shanghai, has done a good job to contain the spread of COVID-19. The economic situation on the mainland is also better than most parts of the world,” said Carson Chan, head of Mission China, Fondation de la Haute Horlogerie, organizer of the show. 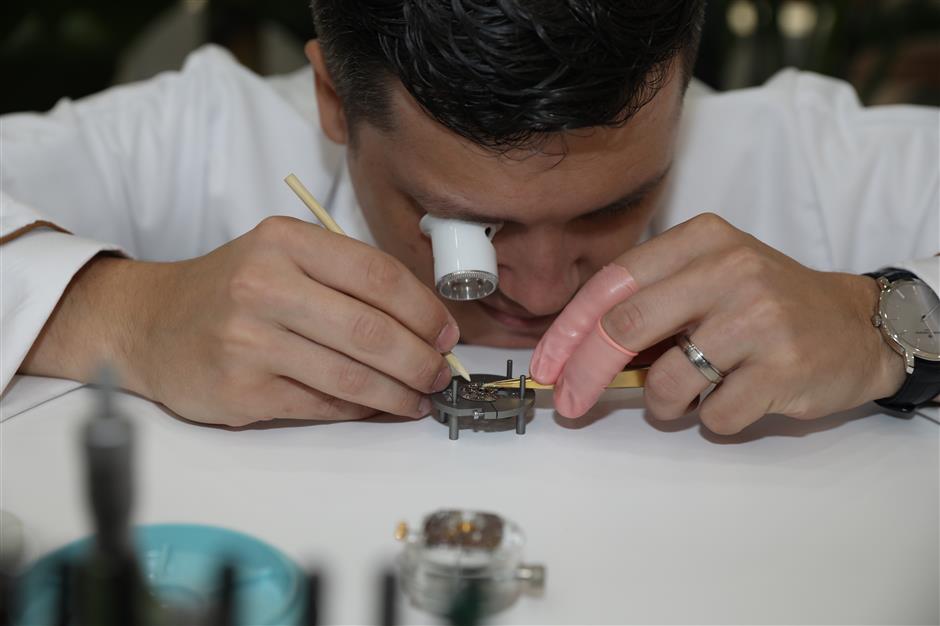 The luxury watches sector has been developing rapidly on the Chinese mainland in the last decade. The knowledge of the consumers has been greatly improved, while the expertise of sales professionals has also reached international standards, Chan said.

Over 30 percent of the products debuted at the fair in Shanghai are specially made for the Chinese mainland, he added.

Some brands also brought entry-level watches with prices of around 20,000 yuan (US$2,919) to attract young local customers, Chan said.

“The foundation will consider hosting future fairs in Shanghai after collecting responses from the membership brands after the event,” he told Shanghai Daily.

Vacheron Constantin unveiled the most expensive watch at the fair on Wednesday, the Les Cabinotiers which costs 17 million yuan. The Swiss brand also displays a limited-edition product for the Chinese market which features the smoke blue color often used in traditional Chinese ceramics.

Piaget showcases one of the world’s thinnest mechanical watches, which is only 2 millimeters thick, while Jaeger-LeCoultre has a watch involving the finest watchmaking techniques of the brand. 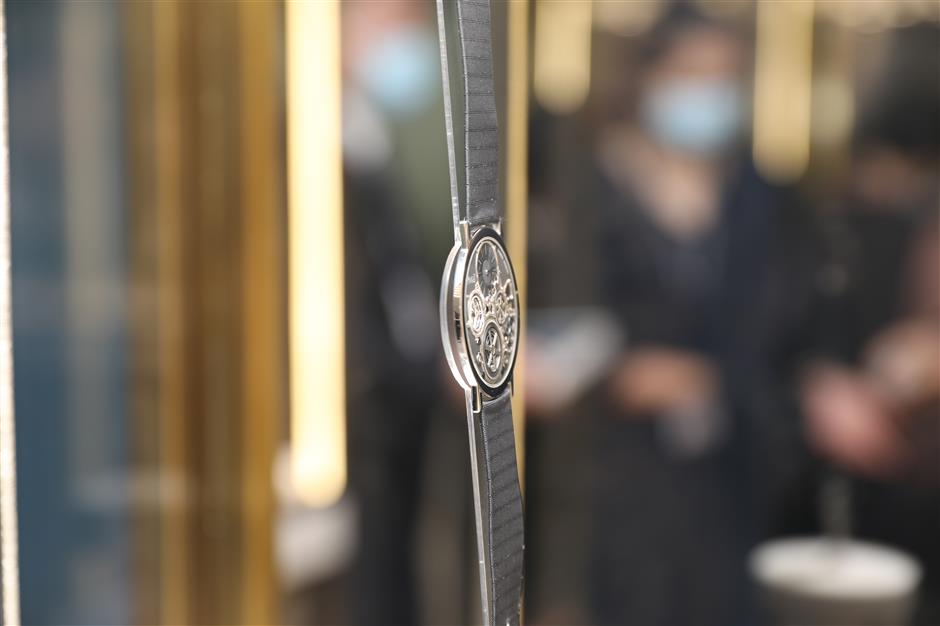 Piaget showcases one of the world’s thinnest mechanical watches, which is only 2 millimeters thick.

"We brought products that most represent the techniques and features of the brand to Shanghai," said an official with Jaeger-LeCoultre.

Baume Mercier made the global debut of its Clifton series at the fair in Shanghai. The brand also released its Baume series made with recycled materials such as plastic bottles. The series of watches are sold at around 10,000 yuan.

The Shanghai government has released preferential policies and measures to encourage brands to open their first or flagship stores in the city as part of efforts to bring the economy back on track amid the pandemic.

As a major site to serve this ambition, the West Bund has hosted promotional events for BMW, Sneaker Con, Cartier, Ikea and Lego.

Despite the pandemic, Dior and LV have launched exhibitions at the West Bund this year. 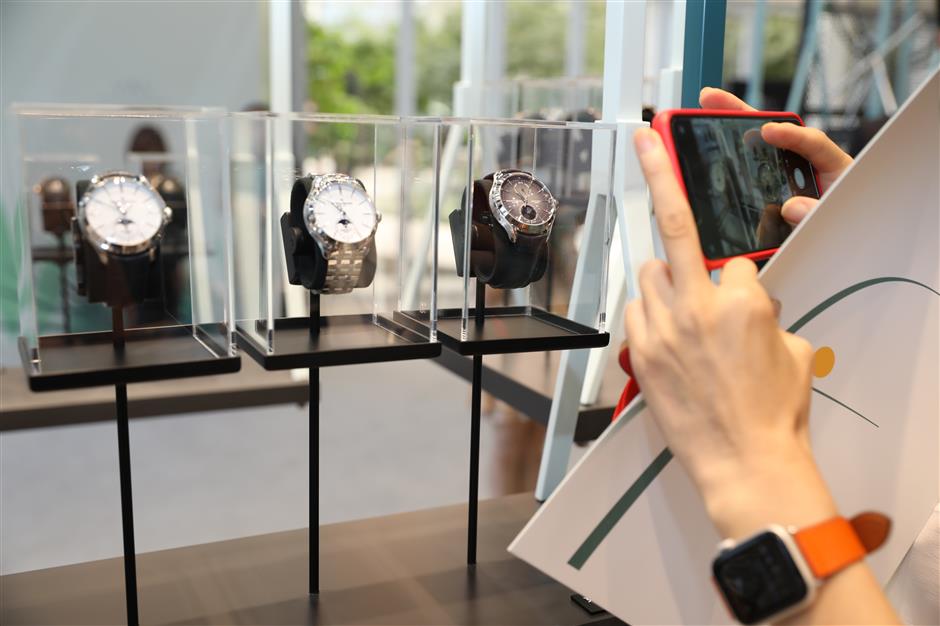 A visitor takes photos of exhibits at the Watches & Wonders trade show at the West Bund Art Center. 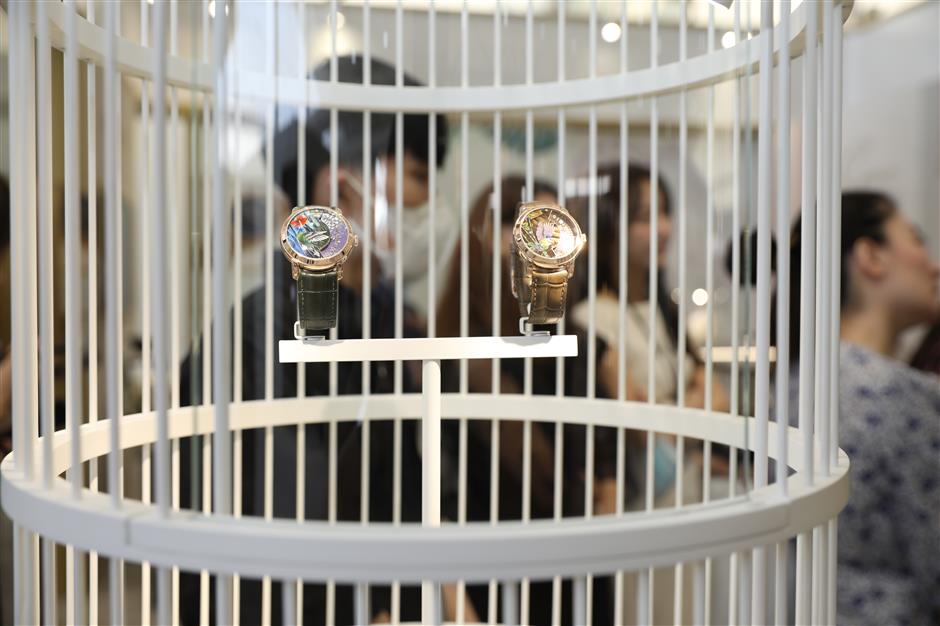 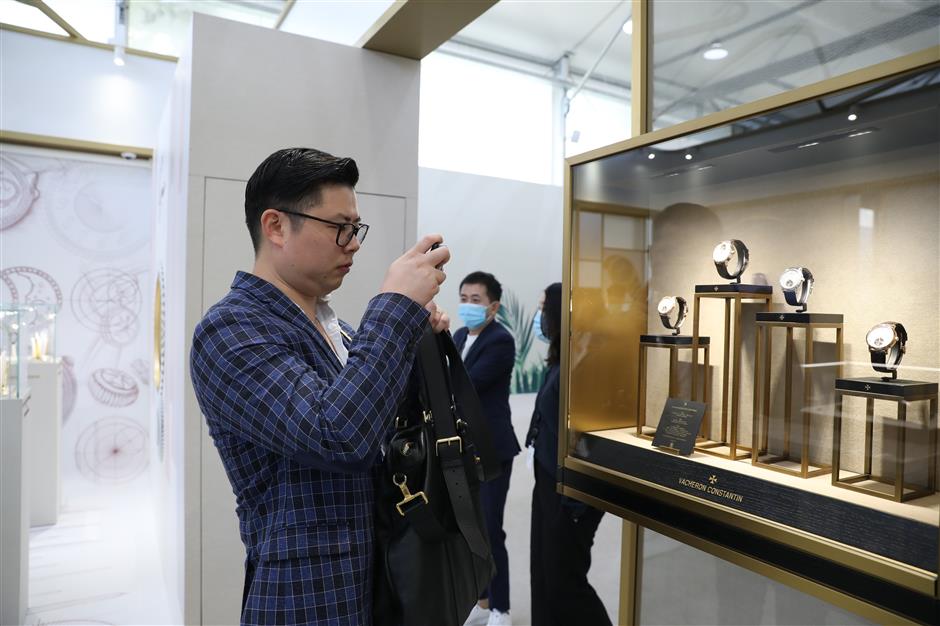