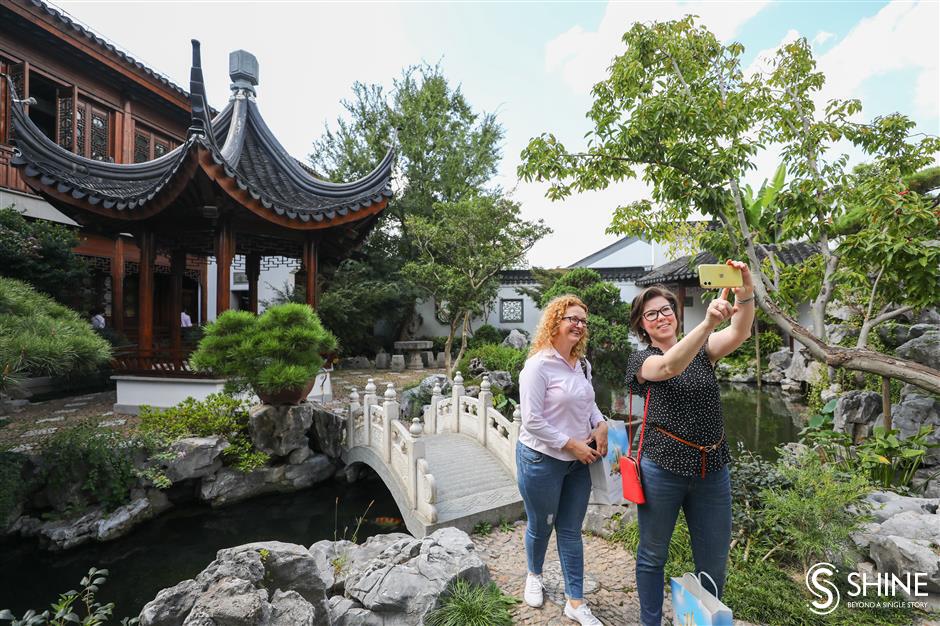 Expats take photos during a tour of the Baoshan District Long Modern Art Center on Sunday.

The Day has the theme "Tourism and Rural Development" this year.

Five tourism routes in the city's suburbs were promoted by the Shanghai Administration of Culture and Tourism, covering Baoshan, Jinshan, Chongming, Fengxian districts and the Pudong New Area. 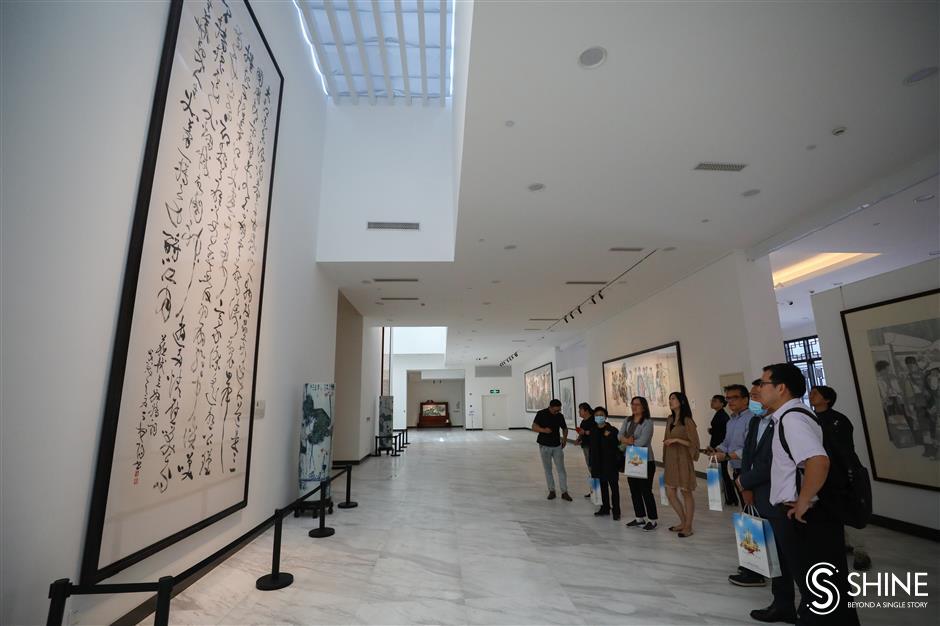 During the event, participants were taken on a virtual tour of Gucun Park, Muran Farm, Oriental Holiday Pastoral Garden and Tianping Village Happy Farm in Baoshan District, where they appreciated the flowerbeds at Gucun Park, experienced local farming, and sunk their teeth into sweet fruit.

They are invited to experience the typical Jiangnan flavor at the Fengjing Ancient Town with a history of about 700 years and draw traditional farmer paintings at the China Farmer Painting Village in Jinshan District.

They were also "guided" to Chongming District where people are able to experience the slow countryside life at the Xianqiao Village of Shuxin Town, the rich ecological resources at Dongping National Forest Park, and the intangible cultural heritage display at the Jiangnan Folk Culture Village.

Chongming's autumn scenery is breathtaking, and it has more to offer in addition to its beautiful ecological landscapes, ranging from diversified agricultural activities to cycling and kart race, the administration said.

A number of hidden villages in Fengxian District, such as Puxiu Village and Xinye Village which have a typical Jiangnan view of lucid water and green shores, were also promoted during the event.

Participants were also invited to taste Zhuanghang mutton and sip shaojiu, or distilled liquor, in Fengxian. The tradition of tasting mutton with shaojiu is an intangible cultural heritage of Shanghai.

At the Lingang Area in Pudong, they are taken on a virtual journey to the Shanghai Flower Port and Nanhuizui Park, a spot to appreciate sunrises. 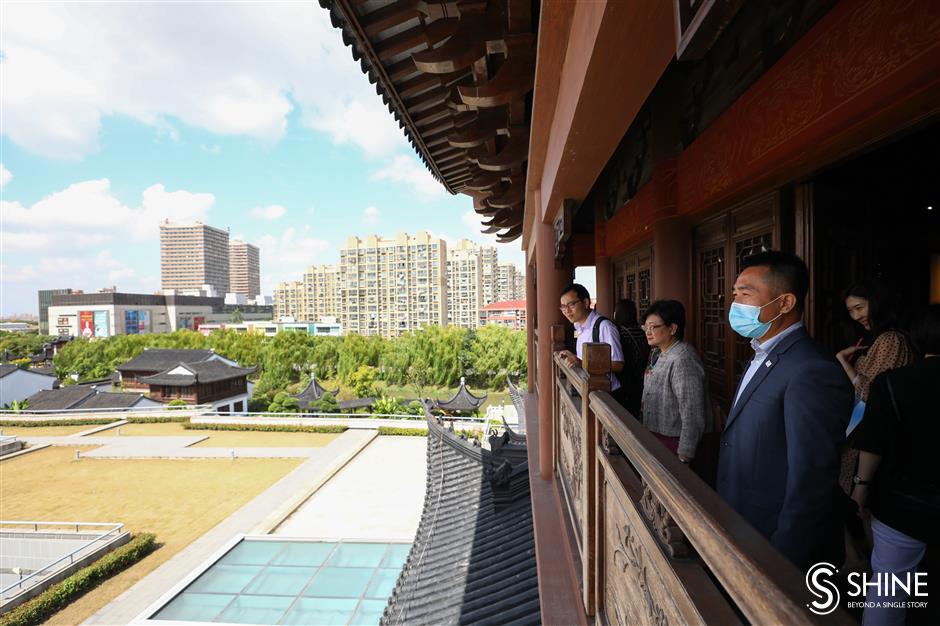 "Shanghai has been conducting rural vitalization projects towards the goal of a beautiful homeland, green pastorale and happy paradise," said Cheng Meihong, deputy director of the Shanghai Administration of Culture and Tourism.

"The development of new business models such as nongjiale, minsu (Chinese version of B&B) and cultural experiences is bringing new vitality into Shanghai's suburbs."

Englishman Ramsay Kerr, founder of The Dragon Trip & The Learning Adventure, who has been living in Shanghai for nine years, said: "I have not been to too many countryside areas in Shanghai, and I have only been to Jinshan once. It is very beautiful".

"I love the place and tried sporting event there."

"l sent a message to my girlfriend immediately, saying we need to go and explore some of the countryside areas in Shanghai," he told Shanghai Daily with a grin.

"I am looking at the Chongming route which is quite nice. I will definitely take my girlfriend there."

Kerr organizes trips for students in Shanghai and he said he was considering tours for them to the city's rural areas.

"Normally I was so busy organizing trips, dealing with our customers in different parts of the world, but this year is so quiet due to the epidemic, and I thought it is a good opportunity to get to know more about the city's culture and tourism," he said.

He said the Shanghai Tourism Festival offers a good channel to explore the city.

"This year so many people in the tourism industry have been affected, and I think it is so important that we get the industry back and running and get people confident to travel again." 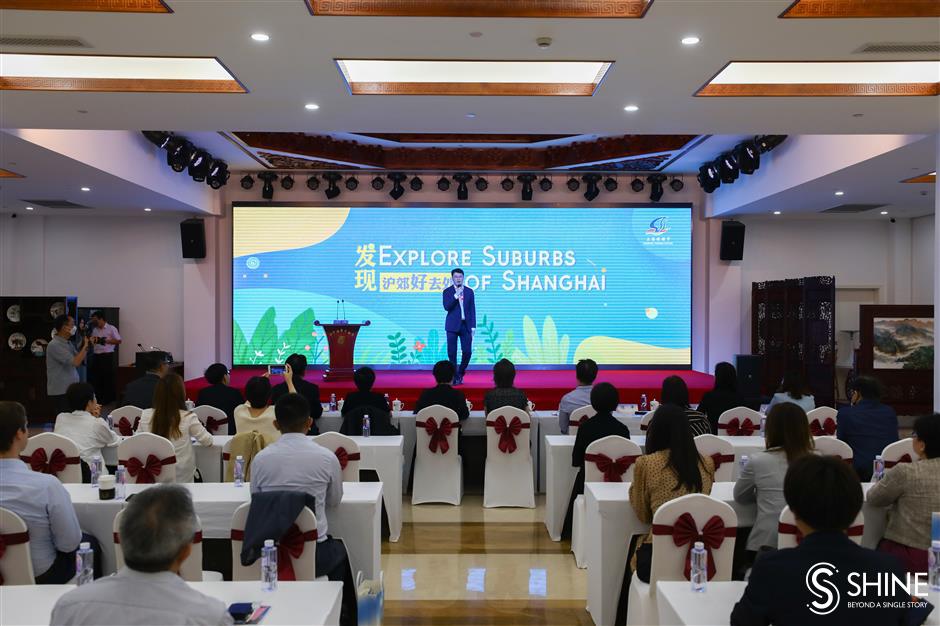 Participants are taken on a virtual tour of the city's countryside during the promotion.

He said he was impressed by Shanghai's efforts in preventive measures.

"It is controlled incredibly well in Shanghai, and it is great that China's domestic tourism can resume now as a results of good control measures," he said. "I feel very safe in Shanghai.

"Cross-border tourism will take longer, but at least, domestic tourism can replace some of the loss."

"Agriculture tourism of Shanghai is very interesting," she added.

A Shanghai tour pass was presented to participants as a gift during the promotion.

"Our promotion campaign targeting the outbound market does not stop and we will host the event to enrich the tourism experiences and understanding of new tourism products among expats living in Shanghai for a long time," he said.