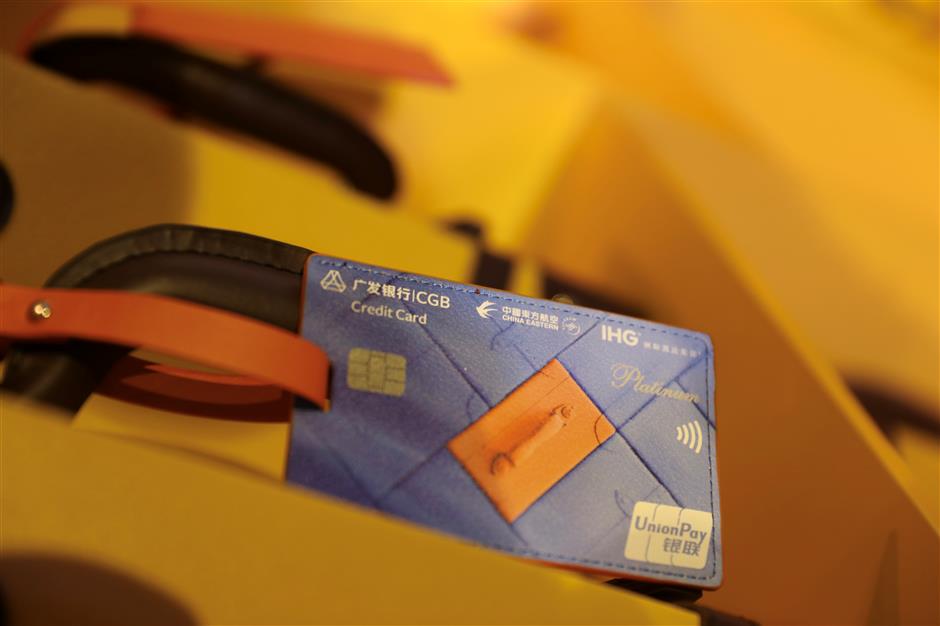 A baggage tag with the look of the three-party credit card released by China Eastern, China Guangfa Bank and InterContinental Hotels Group.

China Eastern released its first joint membership card with a domestic bank and an international hotel group on Tuesday to tap the demand for domestic travel and serve participants at the China International Import Expo.

The three-party credit card, the first of its kind in China’s civil aviation industry, was released by the Shanghai-based carrier, the China Guangfa Bank and InterContinental Hotels Group (IHG) in Shanghai.

Card holders can gain credits by booking flight tickets or hotel rooms as well as shopping. It mainly targets frequent business travelers and will offer more convenient travel experiences for exhibitors and visitors to the CIIE, the airline said.

The release ceremony was held at the Hongqiao Business District near the National Exhibition and Convention Center, venue for the third CIIE to be held from November 5 to 10.

Customers receive one credit for each dollar spent on flight tickets with the airline. About 6,000 credits will gain a free flight to a popular domestic destination, while a night at an IHG hotel will cost 7,500 credits. Credits can also be exchanged for tickets with 19 SkyTeam member airlines across the world.

China Eastern currently has over 40 million members. The transboundary cooperation aims to offer a one-stop service in finance, travel and accommodation for customers, an official with the carrier said.

The carrier initially launched a fly free package in June to boost travel amid the novel coronavirus pandemic. The 3,322 yuan (US$496) package allows travelers to fly free on weekends through the end of the year.

A 2021 version of the fly free package released on Monday allows parents to take their children on their flights.