A live rock and roll concert presented by a band whose members are all visually impaired set off a frenzy among the audience with their passionate performance in Shanghai yesterday, Xinhua news agency reported.

Although the band’s name Bu Kao Pu (不靠谱) literally means “not reading sheet music,” figuratively meaning “unreliable" — but their steady and high-spirited performance was the exact opposite.

The concert, which was held at Blue Note on the International Day of People with Disabilities, featured 10 songs including Queen’s legendary "Bohemian Rhapsody."

The six young members came together two years ago when they began studying music with renowned guitar teacher Zhou Zifeng. “Though there are lots of difficulties, they never slack — they work really hard,” Zhou said.

Eighteen-year-old lead vocalist and guitarist Bian Yiting has a high level of myopia, but that hasn't stopped her from practicing for two hours every day. Although shy and sensitive, Bian transforms into a star when she's on stage.

“The moment I start to sing, I am not nervous at all," she said. "I really enjoy music so much that I sometimes forget to eat just to practice again."

Xu Renyu, also a guitarist, is a sophomore majoring in law at East China Normal University. He also plays pipa, a traditional Chinese instrument, and is adept at musical production.

“I have started to produce music of my own recently," Xu said. "My dream is to become a musician who understands law. I will prove disabled people can also have fulfilling lives."

“The career options for disabled people are often limited with most of them becoming masseurs, which is really pitiful for those with musical talent,” said Yu Huan, a music teacher with the Shanghai School for Vision-impaired Children. “I hope we can help them integrate within society and find them more job opportunities." 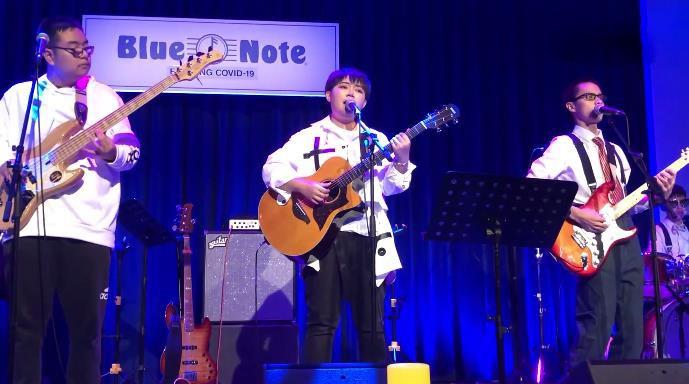 The band performs at Blue Note in Shanghai yesterday.