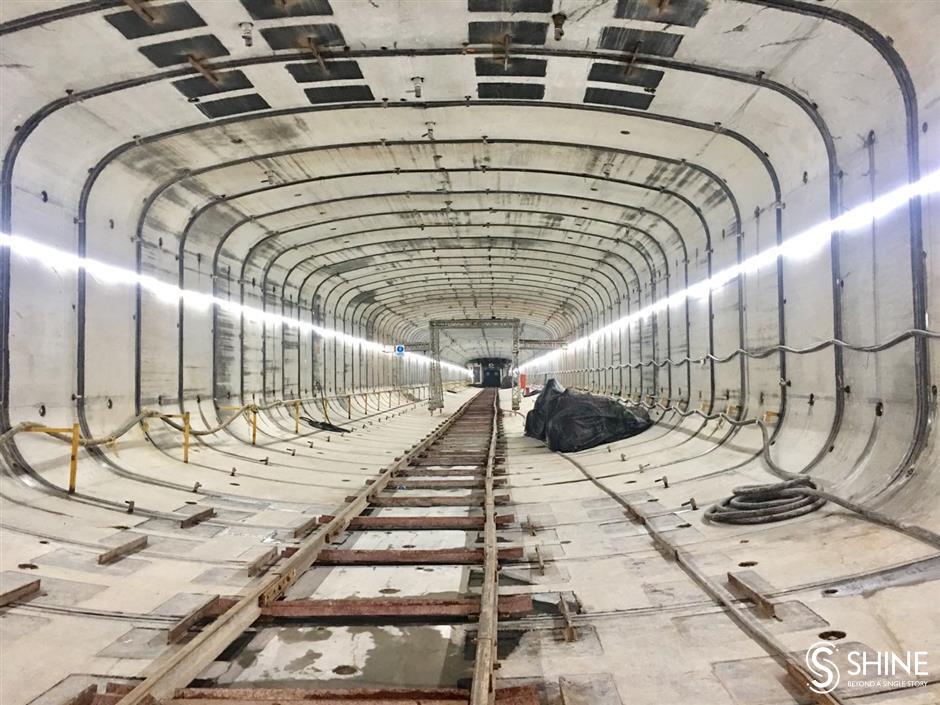 Excavation work on a new underpass project in Yangpu District, which will relieve traffic congestion at the Wujiaochang subcenter, was completed on Saturday.

The Y-shaped double-layer Sanmen Road Underpass will connect Songhu and Zhayin roads, a traffic bottleneck in the area, upon completion.

The tunnel is composed of an 860-meter main section along Songhu Road and a 770-meter section connecting Zhayin Road. It is beneath the intersection of the three busy roads, currently one of the most congested spots in the north downtown.

The underpass will benefit residents living in the Xinjiangwan residential community in the north and shoppers in the Wujiaochang commercial hub to the south, according to the Shanghai Tunnel Engineering Co Road and Bridge Group, the city’s major road and bridge constructor.

“It takes at least 15 minutes’ drive from  Xinjiangwan Town to Wujiaochang during rush hours, and the underpass will reduce that to within five minutes,” said Chen Guanliang, chief engineer of the project.

The project marks the biggest investment by the Yangpu government on infrastructure construction in recent years. The project is expected to support the future development of the Xinjiangwan region while optimizing the core commercial circle effect of the Wujiaochang, according to the district’s transport authority. The project was approved in December 2014. 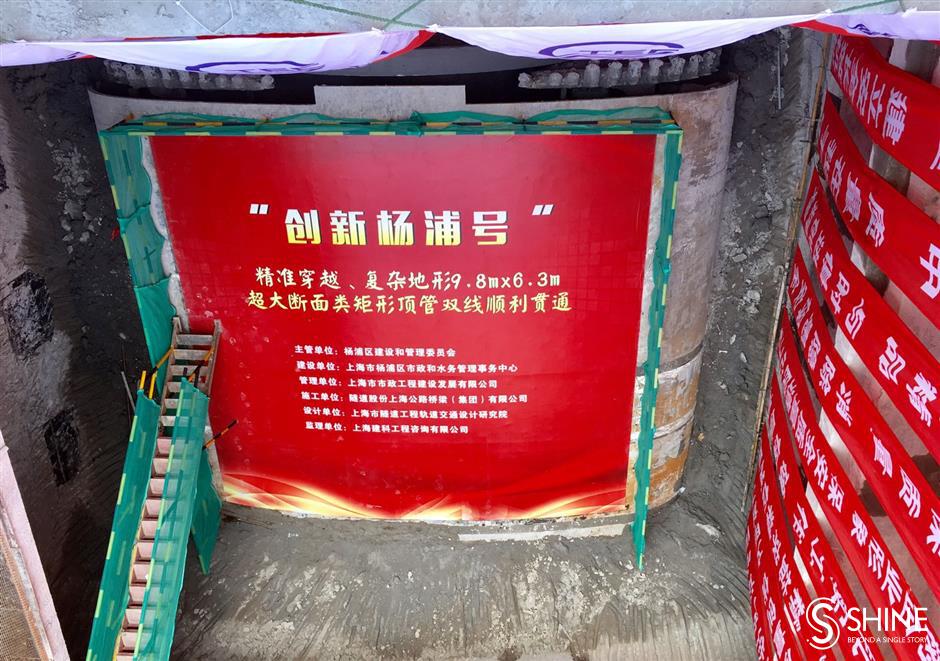 The machine, the largest of its kind used in city construction, means there is minimum excavation work, resulting in less disruption for traffic.

The underpass is only 1.5 meters away from the Metro Line 10, so the digging requires precision and experience, said Chen. The improved jacking machine occupies 20 percent less space.

A new monitoring system called “Explorer” has also been launched for remote monitoring of every corner and detail of the digging and construction process.

To reduce the impact on the already-congested traffic during the construction, the group created a makeshift vehicle lane on Songhu and Zhayin roads.

Nearby residents have been invited to visit the well-ordered construction site.

Equipment installation, illumination and greenery projects will be launched following the key milestone on Saturday. The underpass is scheduled to open to the traffic in the third quarter of next year.

Above the intersection, a skywalk is being built for the convenience of pedestrians. The pentagon-shaped skywalk will stretch for 361 meters above the three busy roads. It will connect the major commercial and office buildings around the area.

The deck will be 6 to 10 meters wide to be able to cope with the large numbers of pedestrians. Escalators and elevators will also be installed. 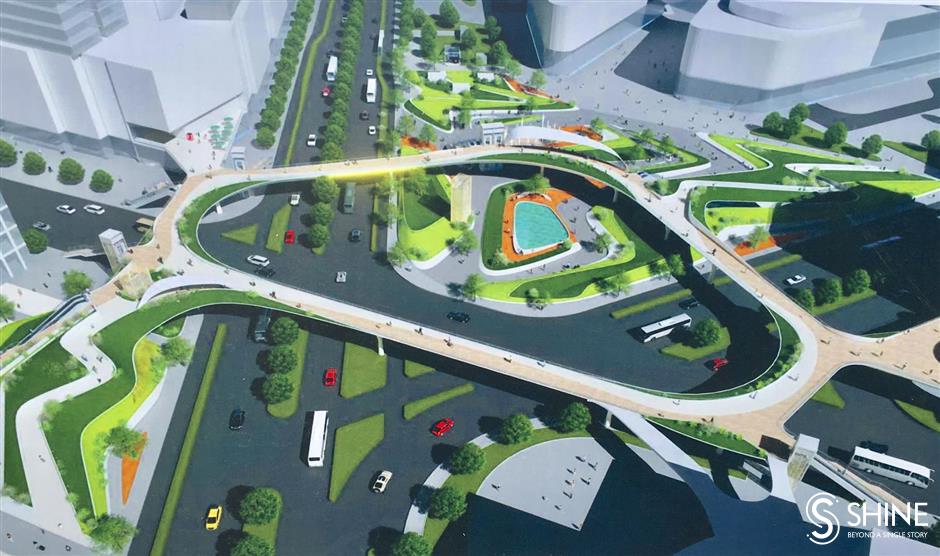 An artist's impression of the skywalk above Sanmen, Songhu and Zhayin roads. 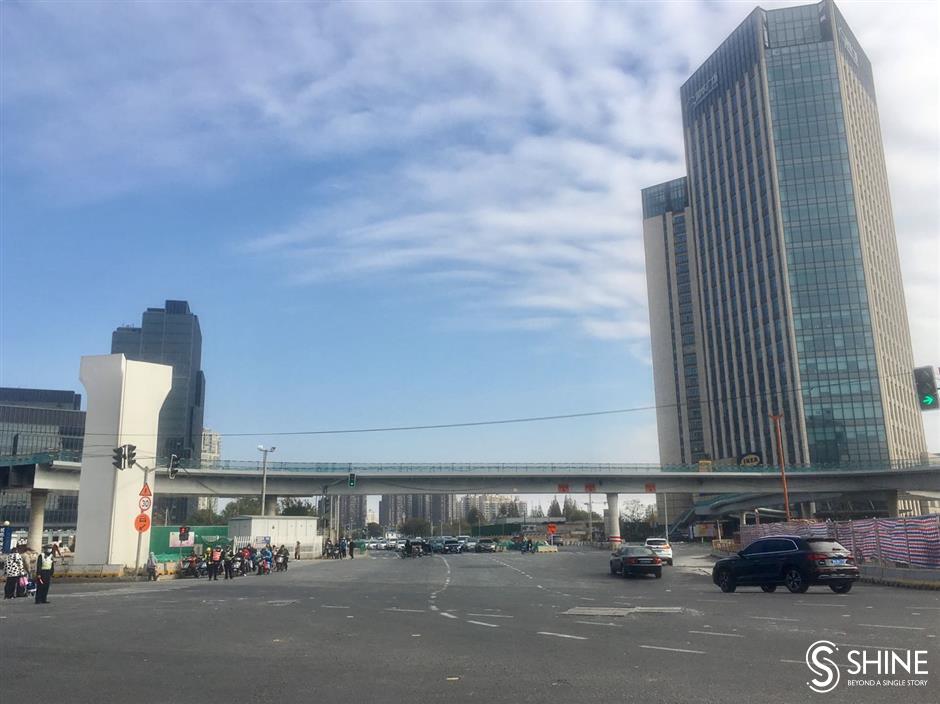 Part of the skywalk has been built over the three busy roads.