The 13th Five-Year Plan (2016-20), a showcase of China’s well-off society construction, has been fully implemented in Songjiang District as its G60 High-tech Corridor has been uplifted from a regional practice to a quintessential solution for the national strategy of the Yangtze River Delta integrated development. The G60 High-tech Corridor is an urban-rural development axis to connect Songjiang with eight cities in the Yangtze River Delta. In Songjiang over the past five years, people’s livelihoods have improved, with transportation more convenient and city management more efficient. All these pave the way for the upcoming 14th Five-Year Plan (2021-25). Shanghai Daily reporter Yang Yang looks into some of these improving aspects. 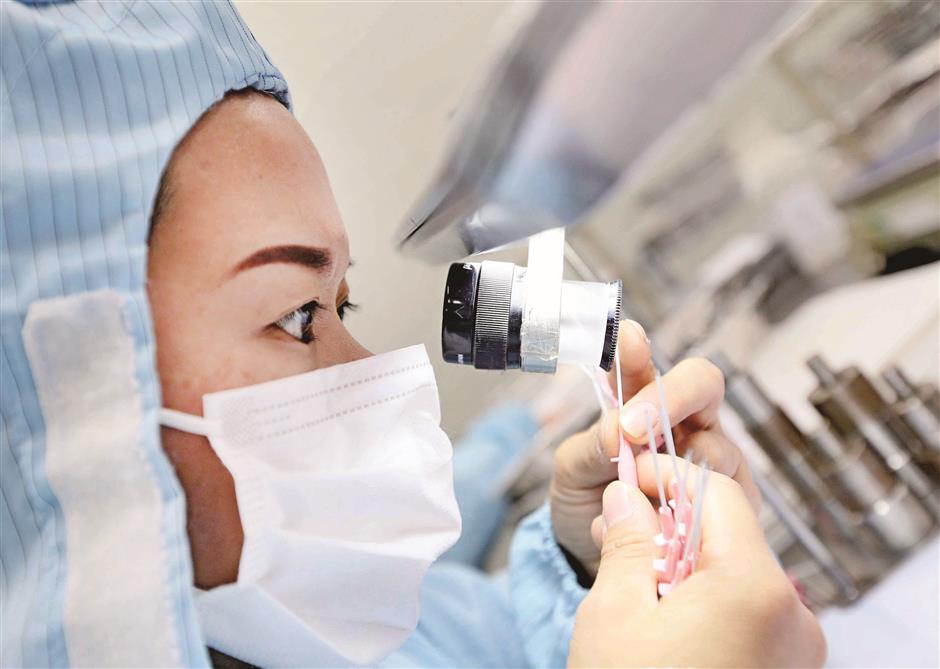 A researcher works at a high-tech company.

In addition, the number of high-tech achievements transformation projects in the district keeps rising every year. By the end of 2019, 220 projects had been at monitoring stage. So far, 46 items have been successfully transformed, putting the district in Shanghai’s top three in terms of the number of approved projects.

A batch of leading high-tech industrial achievements have been created in Songjiang, including a giant six-direction forging press by Shanghai Changqiang Industrial Technology Corp and a 400MAV/500KV mono-phase auto power transformer by Chint Group.

Since 2016, 81 items of high-tech awards at or above city level have been generated in Songjiang, including the fourth-generation mobile communication key technologies and their applications that have won the National Prize for Progress in Science and Technology, and the 65-meter-diameter radio telescope that won the Shanghai Science and Technology Progress Award.

The district is also developing strategic new industries including integrated circuits, artificial intelligence and biomedicine to strengthen the stability and competitiveness of its industrial chains.

Projects worth tens of billions of yuan in investment have been launched in the district in recent years. Among them are a trial operation of AST silicon wafers, construction of a G60 brain intelligence park, a Tencent AI supercomputing base worth 45 billion yuan (US$6.8 billion) of investment and an Evergrande new-energy vehicle global research center, whole vehicle manufacturing center and motor factory. 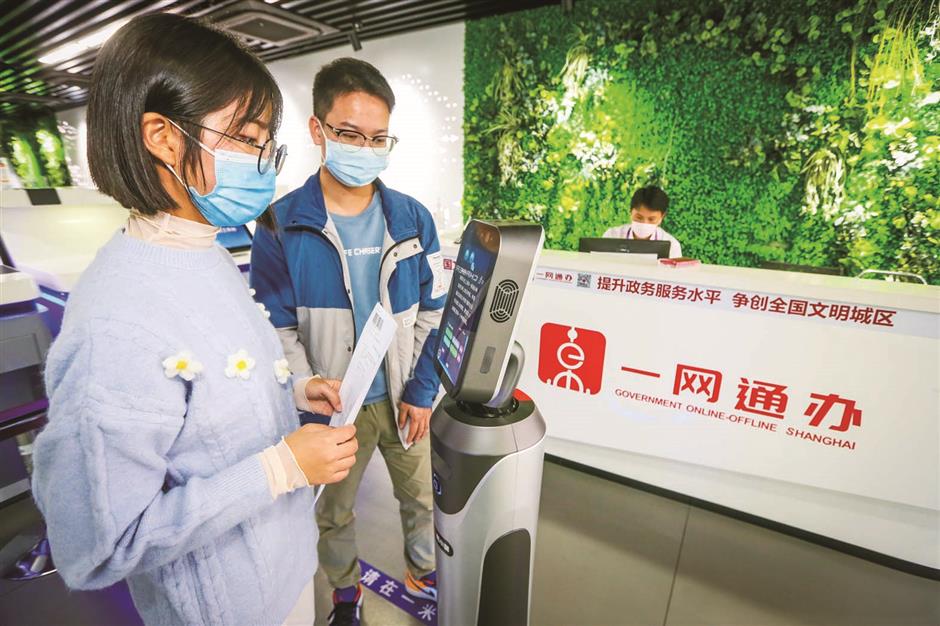 Smart city management systems in Songjiang, including an online government and public service platform and a fine management platform, have been greatly improved during the 13th Five-Year Plan period.

The government and public service platform, aimed to reduce red tape, has launched 30 online services that require cross-government department and cross-regional administration, such as running a grocery, restaurant, pharmacy and car wash outlet.

The new services also include 13 self-help items. Among them, second-hand house’s water, electricity and gas ownership transfers have been merged into a one-stop solution.

“Citizens, when applying for second-hand house ownership transfers in the past, used to run errands to water, electricity and gas companies. After the reform, they can choose the online one-stop solution,” said Zhang Qingsong, deputy chief of the Songjiang Administrative Service Office.

This year, time spent on approvals by Songjiang officials has been reduced to 87.5 percent of last year’s.

“We spend roughly one or two hours on preparing for, inquiring and approving a case. As for business license, official seal or invoice issuing, we can finish it at the fastest speed within a single day,” said Yao Ping, chief of Songjiang Market Regulation Bureau’s registration department.

A Zhongshan Community resident surnamed Li said he used to have to call quite a few government departments over bad parking.

“Now monitoring facilities have been set up along each road, and fewer and fewer people would park their cars improperly and block a street aisle,” Li said.

“Currently we are weaving a more meticulous and smart city management platform by using high-tech measures, and aiming to raise people’s satisfaction about the city and fulfilment as a Songjiang resident,” said an official with the Songjiang City Operation Center. 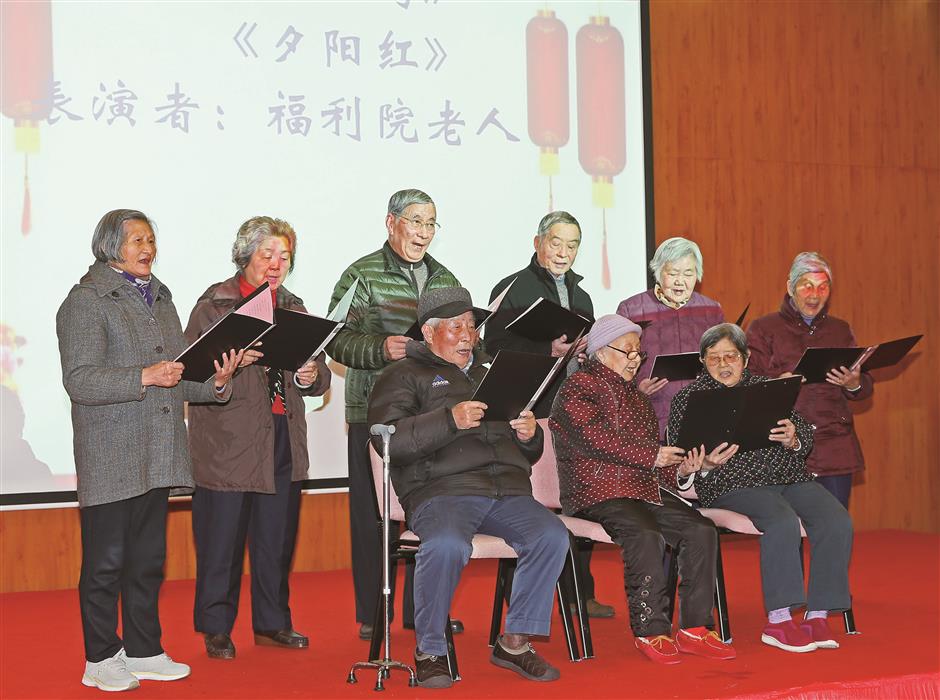 Seniors living at Songjiang Social Welfare Home stage a recital. The total number of public welfare senior-care beds in the district has now reached 7,407, accounting for 4 percent of the district’s registered population of senior citizens.

A senior-CARE service system in the district that places an emphasis on sufficient, high-quality and balanced services evolved during the 13th Five-Year Plan period.

By the end of 2019, the number of senior residents aged 60 or over in Songjiang had reached 193,000, accounting for 29.3 percent of the district’s total registered population.

A gradually improving senior-care service system that emphasizes on service supply and guarantees, policy support, requirement evaluation and industry monitoring is providing seniors in Songjiang with security and happiness in their later lives.

A renovation and expansion project by Songjiang Social Welfare Institution, launched at the end of 2018, is expected to be completed by the end of this year. The project includes the construction of five senior-care buildings and a renovation of the original No. 6 building. Construction on greenery space, landscape, square and senior gymnasiums are also being carried out. When completed, the institution will offer 1,000 senior-care beds and satisfy diversified needs from seniors.

Also during the 13th Five-Year Plan period, the number of restaurants offering catering services for seniors, senior activity rooms and neighborhood communication places has increased by 40, 300 and 230 respectively.

Senior-care services in rural areas, including in the district’s Yexie and Maogang towns, have achieved fruitful results and even merited nationwide publicity.

Starting from July this year, the district’s civil affairs bureau, after raising 600,000 yuan, has been cooperating with third-party public welfare institutions and trying out bathing assistance services for senior residents. Seniors aged 65 or above, who are paralyzed or have disabilities, can apply for the service. Their first bathing assistance will be free of charge, and after they book the service, they will also enjoy government subsidies.

Professional photographers in Songjiang visited various community centers in the district in September and offered free photographic service for seniors from the age of 80. 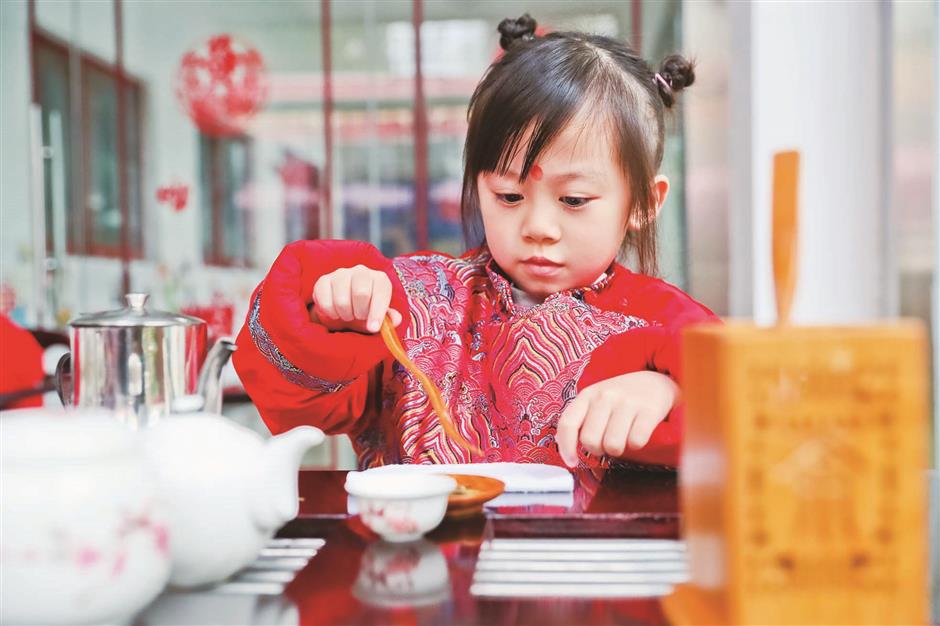 A kid at Songjiang Government Kindergarten tries out tea-making. 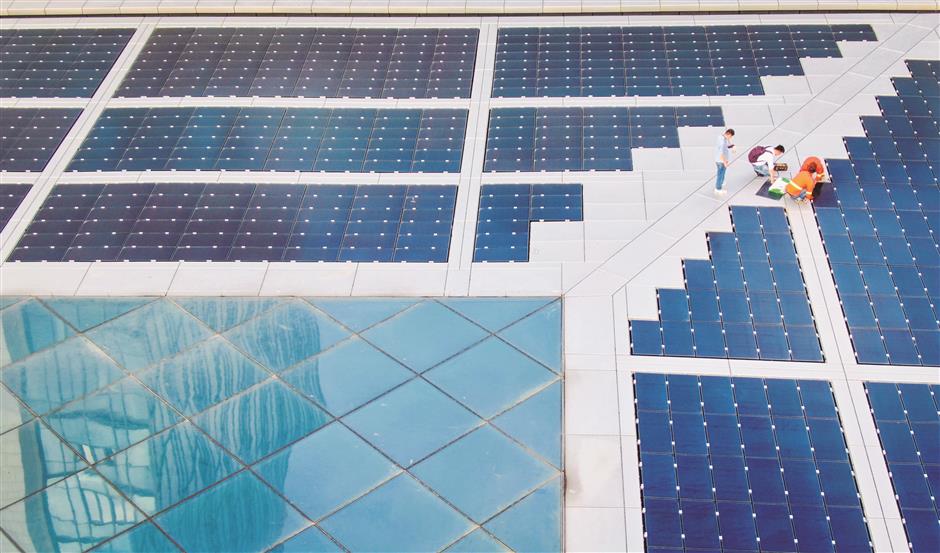 Electricians work on photovoltaic power generators on the roof of Songjiang Indoor Stadium.

High-quality education resources were introduced in the district during the 13th Five-Year Plan.

From 2016 to 2020, Songjiang opened 45 new schools (school expansion projects included) and the construction of another 22 is on its agenda. The problem of overcrowded classrooms has been solved, with average student number per classroom around 40.

Rapid urbanization and the clustering of talent because of the G60 High-tech Corridor vision, large residential area construction and the second-child policy have all combined to make Songjiang a populous district faced with a shortage of education resources.

In previous years, the annual increase in students in Songjiang topped other districts; numbers at kindergartens, primary schools and junior high schools in the district ranked first citywide for seven consecutive years and the average school area shared by each student used to be at the bottom around the city.

Shortly before the 13th Five-Year Plan period, the district’s education bureau made it clear that overcrowded classrooms with 56 students or more would be eliminated by the end of 2020.

As student number per classroom has been greatly reduced, the health of students and the quality of education improved.

At Sijing Primary School, for example, its average first-grade student number per classroom has reduced from 48.2 in 2017 to 41 in 2020 and there’s more space for students’ belongings and for reading corners.

Between 2016 and 2020, the district further sought cooperation with Shanghai International Business and Economics University, East China University of Political Science and Law and Shanghai University of Engineering Science. Songjiang now has a total of 12 university-affiliated schools.