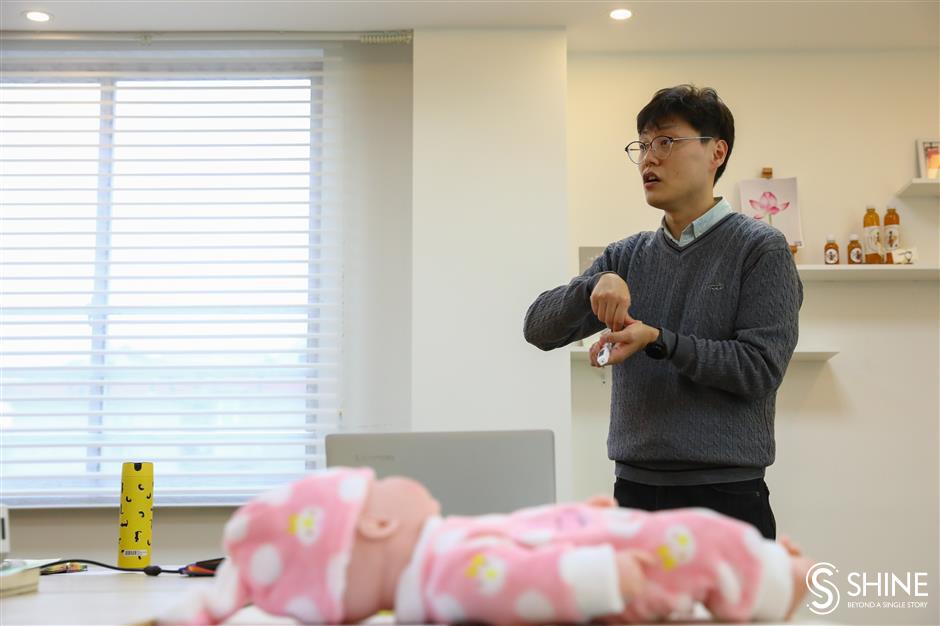 Chu Yuzhou, a doctor from Yueyang Hospital of Integrated Traditional Chinese and Western Medicine, tells mothers about children's tuina at a lecture on Friday.

Li Jing, who saw her son benefit from tuina, a hands-on-body treatment in traditional Chinese medicine, decided to fund free classes for other parents.

Like many new mothers, Li worried about her son being ill, especially when mainstream medication didn’t work so well. He used to develop asthma days into having a cold, and for health reasons had to skip kindergarten.

Li was introduced to tuina by her son’s teacher, who said another parent, a Frenchwoman, had tried the treatment on her child and it worked well. It proved effective on Li’s son, too.

Tuina, a practice that is thousands of years old, is the stimulation of acupressure points on the body by brushing, kneading, rolling, pressing, rubbing and other movements. It is said to be therapeutic for various diseases. Children's tuina is a subcategory of the therapy, tailored to younger bodies.

“My son had asthma because his lungs were not strong enough to let him cough out the phlegm which then blocked his air tube,” Li said. “Tuina helped him get the phlegm out timely.”

Li learned the methods to apply to her son by herself and he is now free of asthma.

Seeking to introduce tuina to more local families, Li got in contact with Shanghai Children’s Foundation earlier this year.

Yangpu District Women’s Federation then stepped in to run the community program envisioned by Li with a local non-profit organization of mothers which has been holding children’s tuina classes for communities and companies for two years.

Jin Jin, a team leader of the organization and certificated tuina therapist, said children’s tuina skills are actively sought after and well received by local parents.

“Many parents are seeking solutions to some common problems among young children, such as constant tonsillitis, long-time coughing, sleeping disorders, slow growth and poor appetite,” she said. “Children’s tuina has proved to be effective in dealing with many of those problems.” 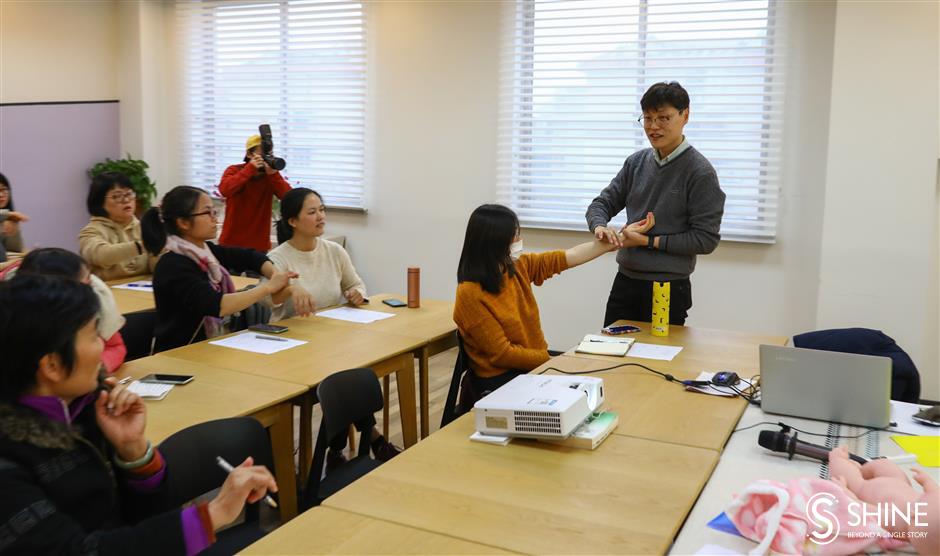 Chu Yuzhou demonstrates a tuina technique during his lecture.

Under the new program, TCM doctors specializing in children’s tuina have been engaged to give classes to community residents and volunteer lecturers on Jin’s team.

One of the doctors is Chu Yuzhou, from Yueyang Hospital of Integrated Traditional Chinese and Western Medicine, who gave a lecture for mothers on treating children’s constipation with tuina at Yangpu District Women and Children’s Activity Center on Friday, the first lecture under the program.

“Children’s tuina has proved to be therapeutic for 32 diseases ranging from diarrhea, constipation and coughing to cerebral palsy,” he said. “In treating muscular torticollis, for example, while many hospitals usually suggest operations, tuina can solve the problem in a few months.”

Children’s tuina, Chu said, is recommended for kids under 12, while the younger the patient, the more effective the treatment, as people have less sensitive muscles as they grow.

A total of 156 lectures are planned under the program, with 24 given by doctors and 132 by volunteer mothers.

Li said the program will be later expanded to other Shanghai districts.

“Through this foundation, I hope children’s tuina can benefit more families with children having diseases that are hard to cure, and that we will have more pediatricians trained in TCM especially in remote areas of the country where there is a lack of medical workers,” she said. 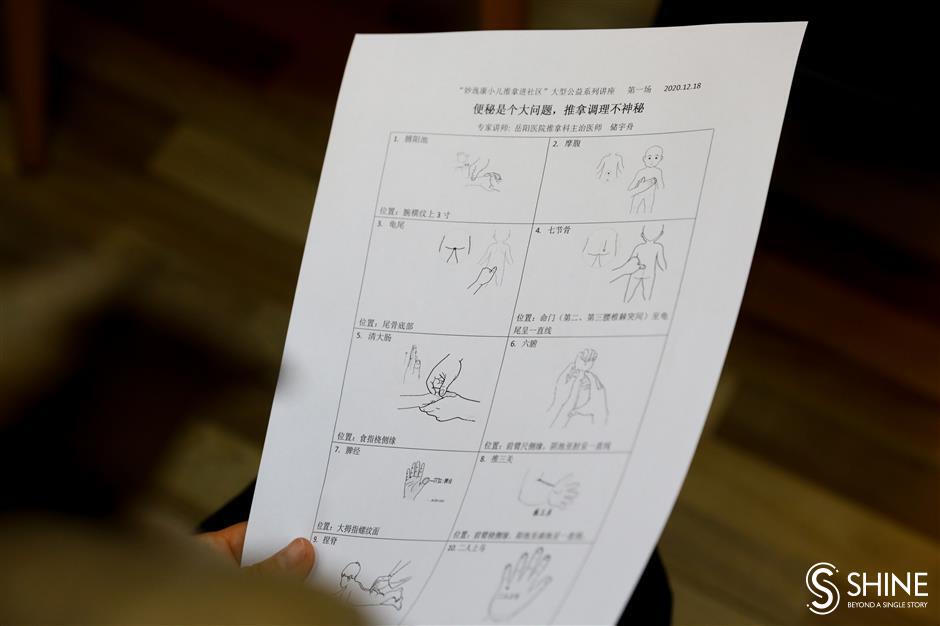 Leaflets handed out at the lecture offer detailed instructions.