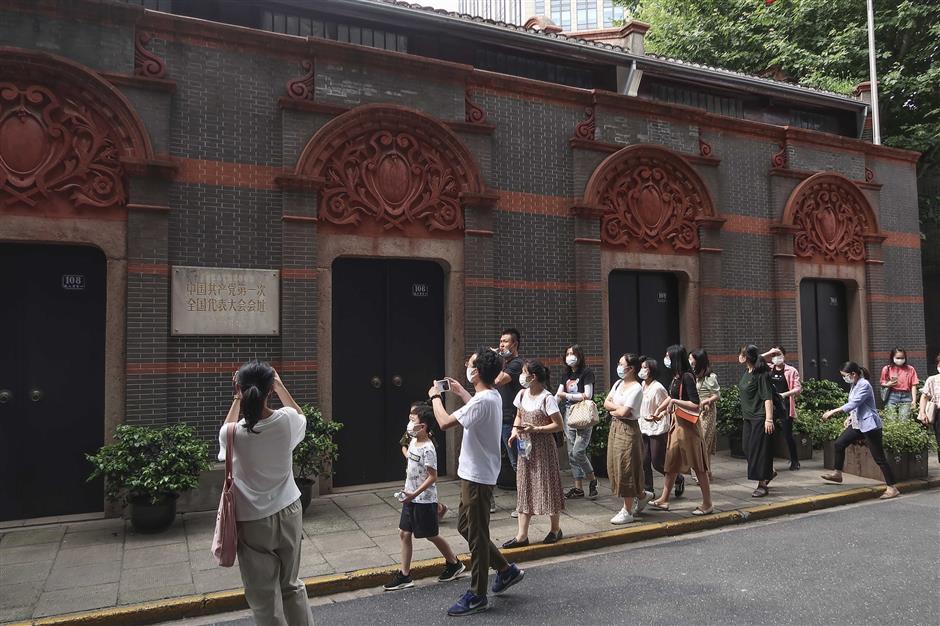 Visitors take photos of the site of the First National Congress of the Communist Party of China.

The site of the First National Congress of the Communist Party of China will be improving its foreign-language services during an ongoing expansion to better serve an increasing number of overseas visitors.

The landmark site, where the Party was born in 1921, has some 20,000 visitors from abroad a year, the head of the memorial said on Monday.

They include foreign leaders, tourist groups and individuals seeking to learn the history of the Party or visit the century-old shikumen (stone-gate) residence in Xintiandi in Huangpu District, said Xu Ming, deputy curator of the memorial hall.

“Both the exhibits and the site guides are multilingual to tell better stories to overseas visitors about the CPC,” Xu said.

Shanghai is the birthplace of the CPC, where, apart from the first National Congress in July 1921, many important movements were launched. President Xi Jinping and six other members of the Politburo Standing Committee visited the site on October 31, 2017, a week after the closing of the 19th National Congress.

Since then, an increasing number of visitors have come to the site every year, making it essential to expand the former 998-square-meter structure where the congress was held a century ago, Xu said.

There were 1.4 million annual visitors in 2018 and 2019 before numbers decreased sharply in 2020 due to the pandemic.

The memorial was closed in November 2020 to give way to the expansion project, which includes a new memorial hall as well as a major facelift.

The building, which will open on the 100th anniversary of the founding of CPC this year, will include the existing site of the first National Congress, an oath-taking hall and new exhibition halls.

The memorial's oath-taking hall is being preserved during the expansion.

The new building will feature Shanghai’s unique shikumen structure in accord with the architecture in the surrounding Xintiandi area, Xu said. Capacity will be increased to be able to receive over a million visitors a year.

The structure of the new memorial has been completed, while exhibition arrangements began in October. The new memorial is due to be finished around May, when a soft opening is planned, Xu told a press conference on Monday.

The exhibits will mainly focus on the original aspirations and missions of the CPC, while displaying the history and spirit of the Party, Xu said.

The new memorial, aiming to become a city landmark, will explore the cultural, spiritual and historical roots of the CPC, as well as its ideals.

“The number of exhibits will be multiplied along with new exhibition techniques,” Xu said. The memorial has collected over 120,000 exhibits.

A number of online exhibitions have been launched to cover more Party members and visitors across the nation, said Yang Yu, a deputy curator. New technologies such as 5G and virtual reality will be involved in the cloud exhibitions, she said.

Traveling exhibitions are also being held across the country during the expansion. Over 60 exhibitions were held nationwide in 2020.

The site of the First National Congress of the CPC at 374 Huangpi Road S. was renovated in 1952. The renovation work on the row of typical shikumen houses in a complex named Shudeli was completed in early 1952. The site opened to the public in 1968. The name of the site was written by former leader Deng Xiaoping.

An initial expansion work was completed in May 1999, with newly built structures resembling the typical shikumen houses of the 1920s. It underwent another major refurbishment and expansion in 2016 to commemorate the Party’s 95th anniversary.