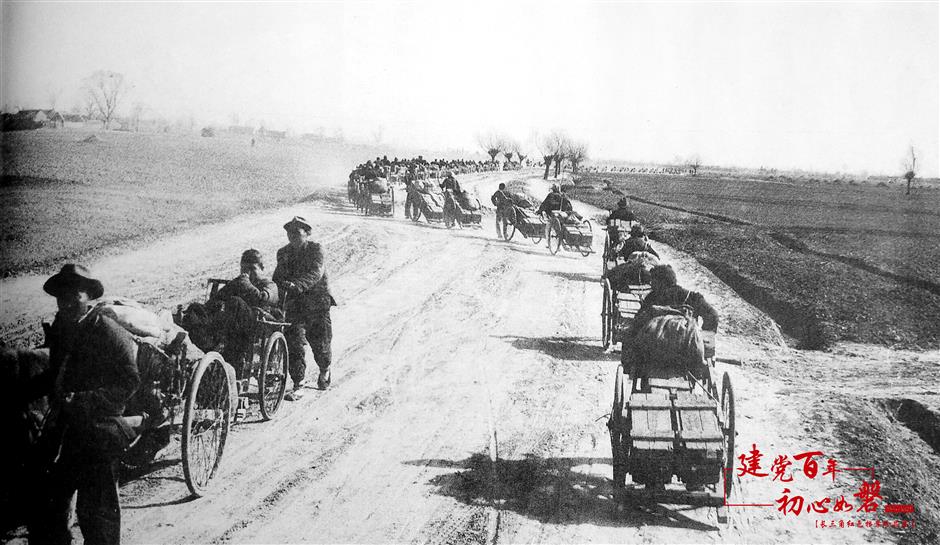 Archives and museums in the Yangtze River Delta region have launched their first joint exhibition in Shanghai covering the revolutionary campaigns of Chinese people led by the Communist Party of China — part of the celebrations for the 100th anniversary of the founding of the CPC this year.

The free exhibition at the Shanghai Archives on the Bund that opened on Monday features nearly 500 precious documents and photos from more than 20 archives and museums in Shanghai and neighboring Jiangsu, Zhejiang and Anhui provinces.

More than half the exhibits are making their first appearance in Shanghai.

Led by the Party, people in the Yangtze River Delta region have devoted themselves to the New Democratic Revolution, the War of Resistance Against Japanese Aggression and the nation’s Liberation War, according to the city’s archives.

“The exhibition reviews how Chinese people have fought for independence and liberation under the leadership of the Party,” an official with the city archives said.

A traveling exhibition will take place in 23 cities in the region following the debut in Shanghai, the official said.

Highlighted exhibits include the earliest manuscripts and original publications promoting Marxism among Chinese people in Anhui and Jiangsu provinces, such as “Social Problems” written by early Party leader Zhang Wentian in Nanjing and “Principles of Communism” translated by famous philosopher and jurist He Sijing.

A newspaper named Frontline published in the west of Zhejiang Province during the war against the Japanese invasion.

The books “History of Socialism” and “Class Struggles” are also on display, which Chairman Mao Zedong described as the most impressive publications that helped establish his faith in Marxism when he was young other than the “The Communist Manifesto.”

A series of historical photos are exhibited documenting the First National Congress of the CPC in Shanghai in 1921. One of the photos shows the Bowen Girls School where nine of the meeting's delegates stayed, including Mao, while another shows the dormitories of Mao and He Shuheng.

Other photos show former sites of the earliest Party organizations in the city and rural areas in Anhui Province.

Several rare, disguised Party publications are also exhibited, made to promote Communism while avoiding the crackdown of the Kuomintang regime. Bolshevik, an official magazine of the CPC Central Committee, was once disguised as the Cultural History of China. Another, The Life of the Party, is camouflaged to look like an elementary school textbook.

Many important Party newspapers are displayed to show the fight against Japanese intruders during the war in the Yangtze River Delta region between 1931 and 1945.

Other documents and photos demonstrate the contributions and support of people in the region to the People’s Liberation Army during the liberation of major Yangtze River Delta cities such as Shanghai and Nanjing.