'Most beautiful dome' to be unveiled by June

The first phase of The Central project, which includes the Central Mansion and the Meilun Building.

A dome on part of a historic arcade formerly known as Edward Ezra Arcade will be completed by June to become a new landmark attraction near the Bund.

The project, known as the city's most beautiful glass dome, is in the middle of the complexes comprised of Central Mansion, the Meilun Building, the Xinkang Building and the Huaqiao Building, all built between 1924 and 1930.

The Neoclassic architectural style of the buildings is well preserved with original floors, mosaic floor tiles and polished stone facades. The arcade is being developed as a new commercial, tourism and cultural landmark on the Nanjing Road Pedestrian Mall.

The first phase of the renovation project, Central Mansion and the Meilun Building, was officially opened in 2017 and includes shops, restaurants and offices, as well as arts and cultural sites.

The whole project will be completed and open to the public by the end of the year, the Shanghai Bund Investment (Group) Co, the project’s developer, said on Thursday.

The four buildings are being connected with the dome and a crossroads in the middle. The giant glass roof will cover nearly 4,000 square meters with 12,000 lamps, according to the group.

Upon its completion, visitors will be able to walk into the project through the main entrance on the pedestrian street.

As a key part of the arcade, the Central Mall was a long-time market that for decades was known for selling and repairing electronic appliances. The five-story mall, covering about 6,000 square meters, had a reputation for reliable quality and its wide variety of goods such as glasses, cigarette lighters and watches, as well as imported products. It was closed in 2007 along with nearby historic buildings for the renovation project.

Along with the landmark project, a major facelift campaign will be launched on the nearby backstreets such as Jiujiang, Jiangxi and Sichuan roads. According to the blueprint of the district government, a global commercial circle will rise around the Nanjing Road E. and the Bund. 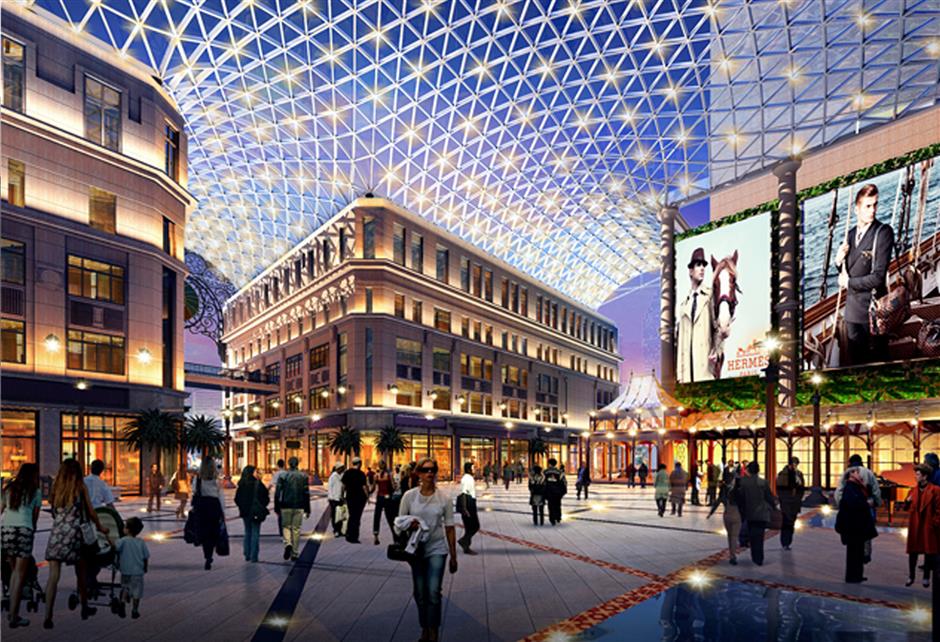 An artist's rendition of the large glass roof and crossroads in the middle of The Central project.