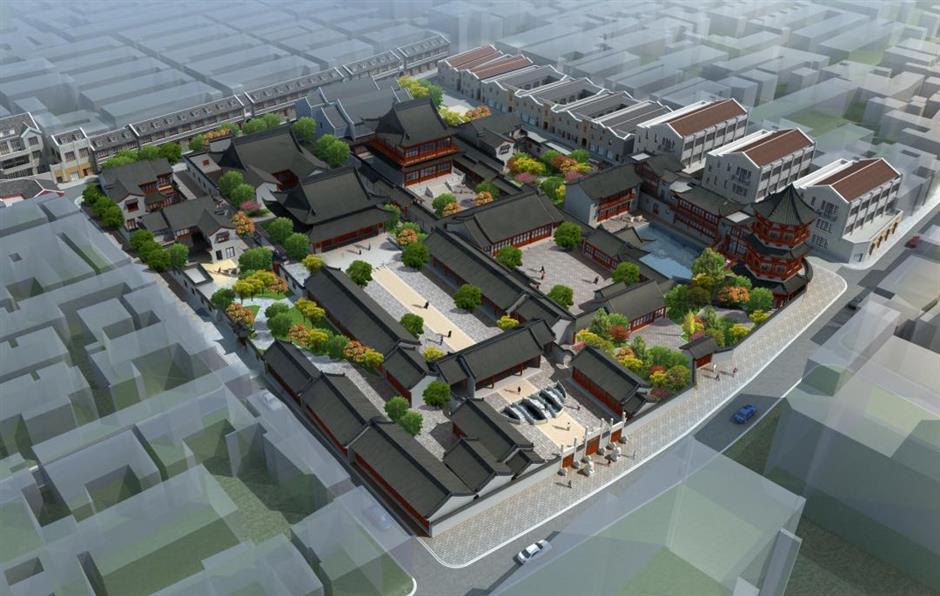 An artist's impression of the renovation plan for the Shanghai Confucian Temple.

A renovation and expansion project for the Shanghai Confucian Temple, or Wenmiao, in downtown Huangpu District will be launched this year, to restore its traditional layout and enhance its historic appeal.

The temple was founded in 1294 during the Yuan Dynasty (1271-1368), and has been renovated or rebuilt several times. The current structure on 215 Wenmiao Road was built in 1855 in the Qing Dynasty as the only Confucian temple in downtown.

It features many original historic buildings and has been listed as a city-level protected structure. The site, of historical interest, covers more than 10,000 square meters.

Many locals also equate the temple with a popular wholesale book market opened in 1993. A smaller scale second-hand book market operates every Sunday in the Great Hall of Confucius Square — or Dachengdian Square. At its peak time around 2001, the market would welcome almost 10,000 customers every Sunday. It was closed last year to prepare for the facelift.

After more than a century of operation, the inner structure of the temple buildings have aged, while the surrounding old residential community has been restricted in its overall development, according to the district’s planning body.

The renovation project will demolish illegal structures and management houses, which were built in recent decades, within the temple.

The former calligraphy and painting trading center on the northeast of the temple will be removed to expand the temple to Xuegong and Wenmiao roads as well as Menghua and Laodaoqian streets.

New structures will be built according to the traditional layout of a Confucian temple, which usually features temple buildings in the west axis and houses for study in the east. A teahouse, visitor center and office building will also be built.

It will become a “cultural and knowledge landmark” with comprehensive functions such as academic research, exhibitions, cultural education, foreign exchange and tourism.

The expanded temple is expected to create a characteristic block along with the nearby shikumen, or stone-gate, residential buildings, according to the district government.

The renovation plan has been publicized, and public opinions collected. Construction work is scheduled to begin late this year.

The area along Zhonghua and Wenmiao roads is the core and original place of Shanghai's old town, dating back over 700 years.

The district government launched a new round of renovation around 2018 in the city's old town area around the temple to retain its historic flavor while improving the living conditions of residents.

About 2,000 illegal buildings, including those built by residents to make up for the limited living space, were demolished around the landmark temple. Their houses were renovated to have separate toilets or improved shared facilities.

"The place kept many historic traces of Shanghai's development and retained the traditional lifestyle of the city," an official with the Laoximen Subdistrict said.