A host of the Shanghai Airport Authority guides online viewers around Pudong airport's hotel and terminal buildings on Saturday.

Hosts of the Shanghai Airport Authority experienced the airport hotel, VIP lounge, dining and shopping facilities of the Pudong airport during the two-hour livestream.

Free tickets, hotel rooms, VIP lounge admissions and other coupons with total values of 100,000 yuan (US$15,260) were presented. The restored domestic flights and passenger volumes have also been showcased through the live event.

Since the summer-autumn aviation season starting March 28, the number of daily flights at the airport has been restored to the level before the coronavirus outbreak. 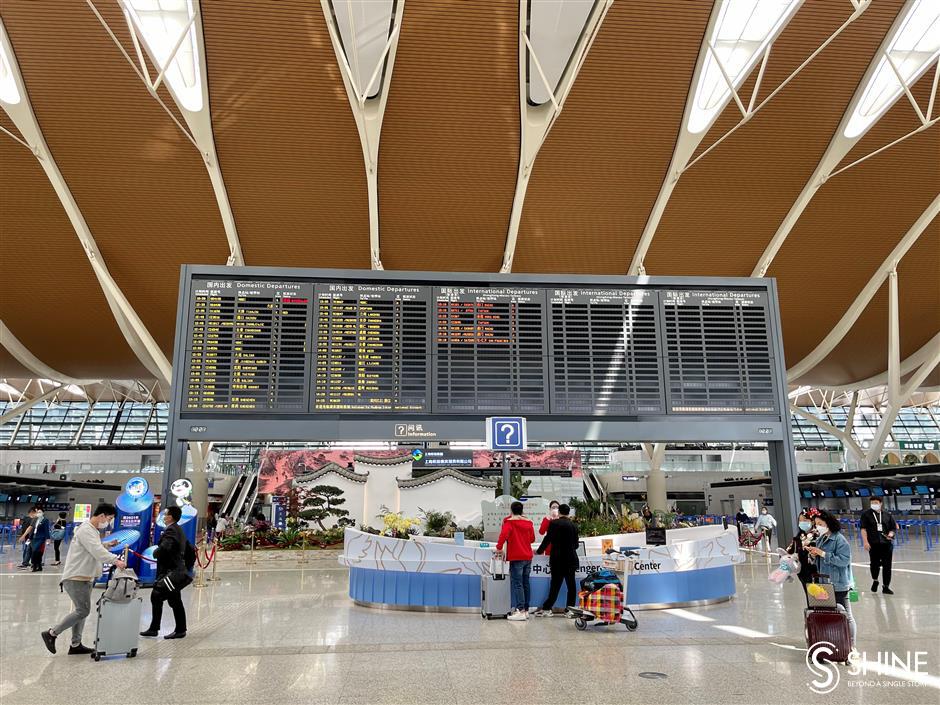 Travelers at the T2 terminal of Pudong airport.

The first livestream by airport authority is one of the efforts to help bring businesses at the airport, which was critically affected by the COVID-19, back on track, said Yin Xiao’en, assistant general manager with the business operation company of Pudong airport.

“We’d like to try these new measures such as livestreaming and wanghong (internet sensation) that are more acceptable to young customers,” Yin said. 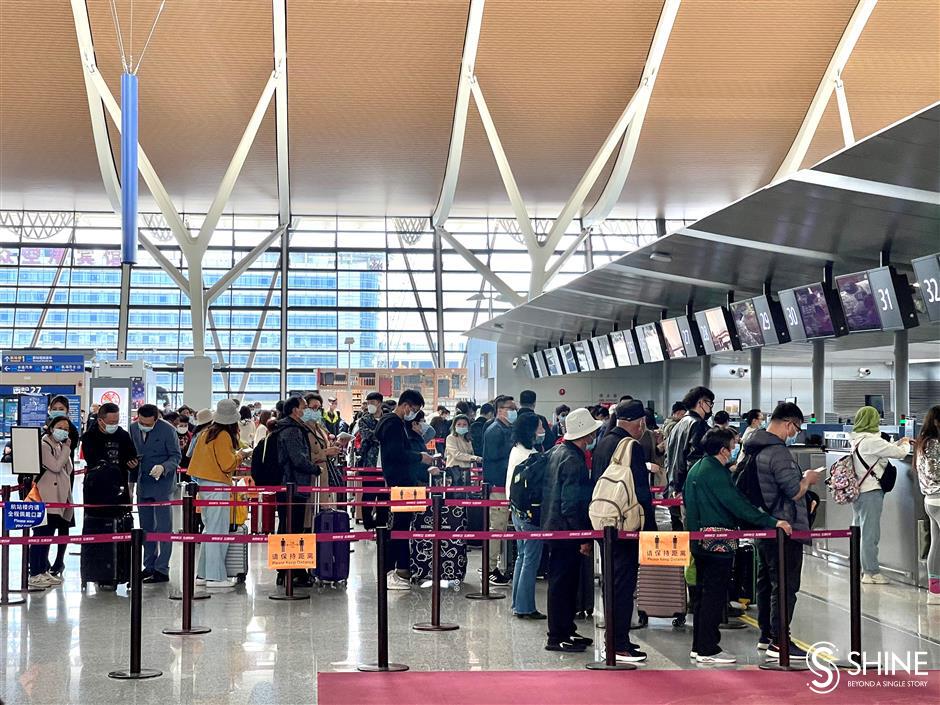 The T2 terminal at Pudong airport is busy.

As the volume of domestic travelers keeps rebounding, the total sales of the stores and eateries at the airport’s terminal buildings are expected to fully recover during the Labor Day holiday starting May 1, he said.

Pudong International Airport has about 70,000 square meters of commercial facilities at T1 and T2 as well as S1 and S2 satellite terminals. The world’s top fashion brands and popular restaurants have been operating at the airport.

Additional promotion campaigns have been planned for the city’s Double Five Shopping Festival next month to further boost consumption at the airport, he added. 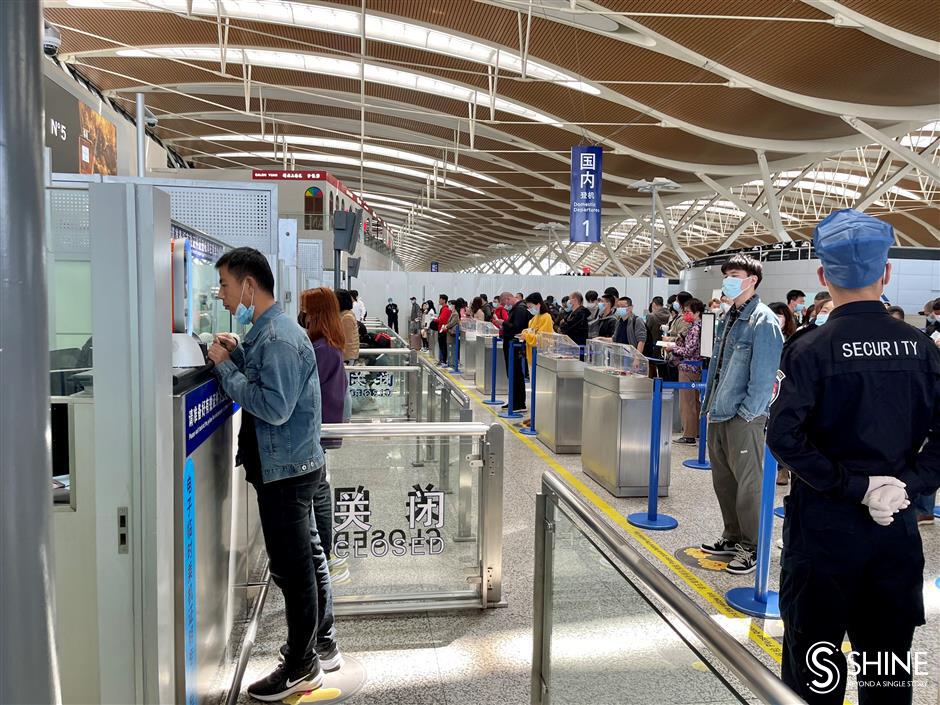 Pudong airport handled the largest number of international passengers among domestic airports. It was also among the most severely hit by COVID-19, after most international flights were suspended to curb the spread of the virus.

The livestreaming event also promoted the Ramada Airport Hotel and the VIP lounges that attracted many overseas travelers ahead of the pandemic.

The four-star hotel, about 1.3 kilometers away from Pudong airport’s T1 and T2, has redecorated a dozen of its vacant rooms with popular cartoon characters to attract family customers on weekends and holidays. A large number of domestic travelers arrive at Pudong airport.

A professional flight simulator of a Boeing 737 passenger aircraft has also been newly unveiled in the hotel’s lounge, a first for a domestic hotel.

“We used to mainly attract pilots and crew members of foreign airlines who cannot come now due to the COVID-19,” said the general manager of the hotel.

Previously, more than 80 percent of its customers were the crews of foreign carriers who had to stay overnight at the airport.

“We had to change our strategy, instead of waiting for the restoration of international flights,” he said.

By mid-May, about 15 rooms will redecorated with cartoon themes such as Paul Frank and Litter Yellow Duck. A new children’s playground has also opened at the business hotel. A flight simulator at the Ramada Airport Hotel.

The VIP lounges at the airport have seen returning customers though global traveling is still at a standstill.

The lounges that used to mainly serve the first-class or gold card holders of airlines have opened to all travelers with admission tickets. A discounted admission to all the lounges operated by the airport authority at Pudong or Hongqiao airport costs 88 yuan during the livestreaming event.

Each of the lounges at both airports are attracting over 1,000 customers every day, more than that of 2019. Half of them are economy-class travelers, said Sun Yuan, the marketing manager with the VIP service company of the airport authority.

A room at the airport hotel has been redecorated with the theme of Paul Frank to attract families on weekends. 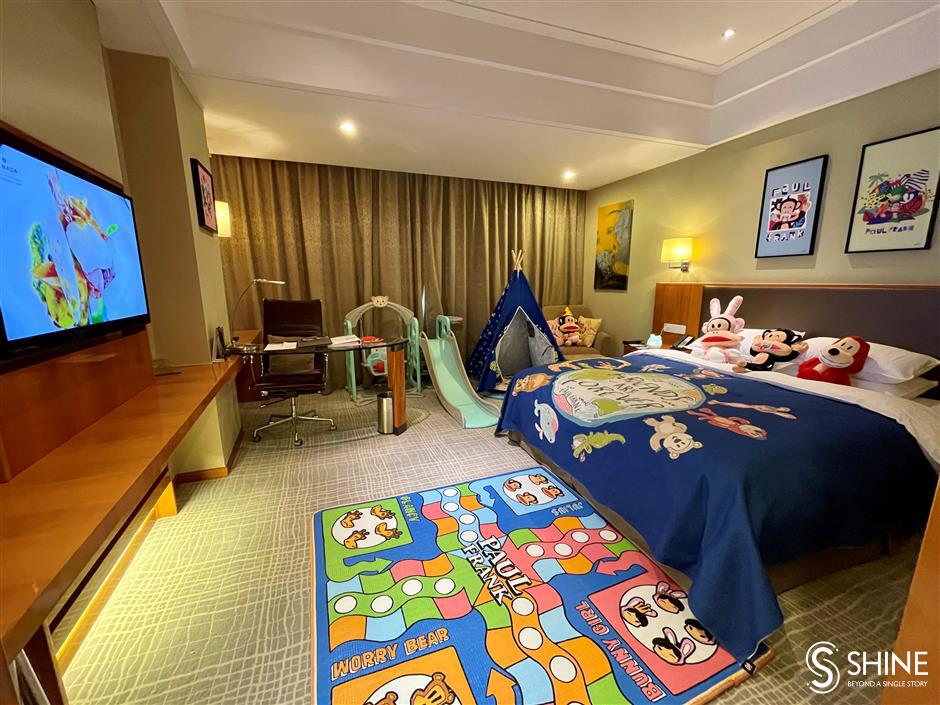 The room is colorful and playful.