Minhang is a coffee-lover's paradise: so many cafés, so many choices 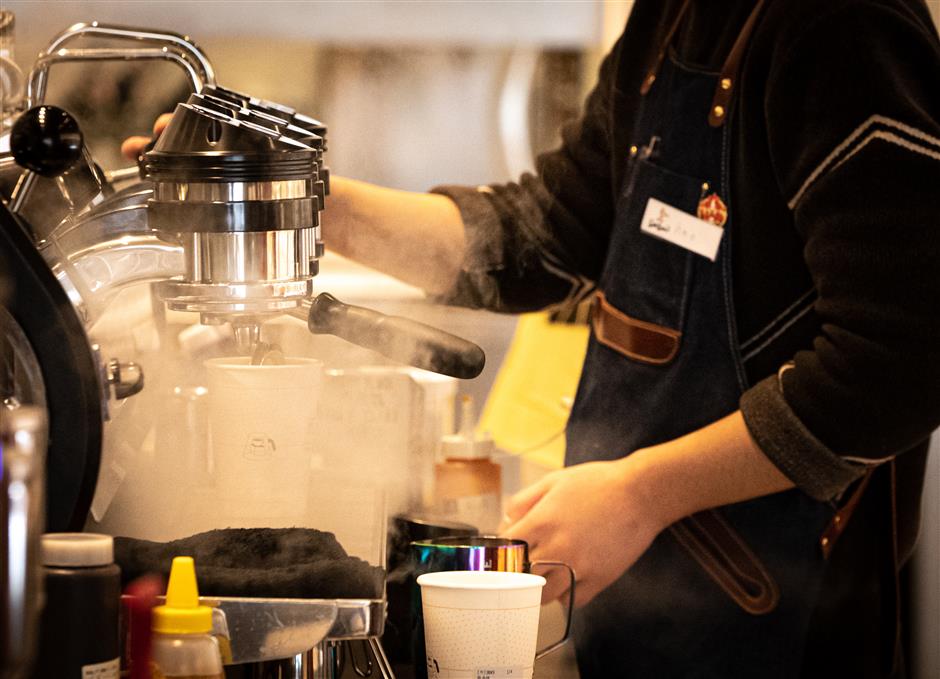 Seesaw barista is making a cup of coffee.

In a land once associated with tea drinkers, coffee is now the preferred drink of many. Just count the cafés! Indeed, Shanghai has an estimated 7,000 cafes, probably ranking it first in the world.

The earliest records of imported coffee date back to 1844, about the time that Shanghai was opened as a treaty port and foreign culture came flooding into the city, according to Sun Ying, a Shanghai culture researcher at Minhang Library.

As a fervent coffee lover herself, Sun has published works on the evolution of coffee-drinking in Shanghai and shared some of her findings in a recent livestreamed event during Shanghai Coffee Culture Week.

The event, which closed in mid-April at the National Exhibition and Convention Center in Hongqiao, featured stalls that catered to exhibitors, ingredient and equipment suppliers, and coffee lovers.

In the early days of Shanghai’s coffee culture, cafés were confined to hotels or restaurants, Sun explained.

The first independent café in the city was started in 1851 by a Cantonese businessman named Sheng Zai. It was later renamed Shengchang Café. As the business expanded, the café was relocated to Fuzhou Road and renamed Xinghualou in 1883. Xinghualou, now a restaurant, has survived there.

“It was a meaningful discovery,” Sun said. “It was the first independent café in Shanghai and the first operated by a Chinese. What’s more impressive is that Xinghualou still stands today.”

The earliest “coffee streets” in the city were located on Huaihai Road, Sichuan Road N. and Huoshan Road, Sun said.

“Café openings were often associated with events of the time,” Sun explained. “For example, after the Russian Revolution in 1917, many Russian nobles fled to Shanghai and lived around Huaihai Road. They were used to drinking coffee.”

Though considered an imported culture, coffee drinking has blended in seamlessly with Shanghai life.

A recent survey found that Hongqiao in Minhang District had 158 cafés, second only to the financial district of Lujiazui in Shanghai. The district’s Xinhong Subdistrict was included in the top 10.

Many of the coffee houses have developed distinctive personalities.

Cuiqu Coffee sits in the Aegean Place mall, facing the street. It’s a busy commercial area, and the café looks more like a cultural venue than a place serving coffee. It is filled with paintings, crafts, classical music and more than 6,000 books available for customers to read.

“We want to provide an ideal, warm environment for coffee drinkers,” said Zhang Wenlong, manager of the café.

The menu boasts Ethiopian Yirgacheffe beans that produce coffee with a slight sweetness and floral aroma.

The café’s feature dish, a soufflé, was added to the menu two years ago and has become a popular favorite. Each soufflé is made to order and served while still hot and fluffy. Customers are willing to wait for half an hour just to have a bite. 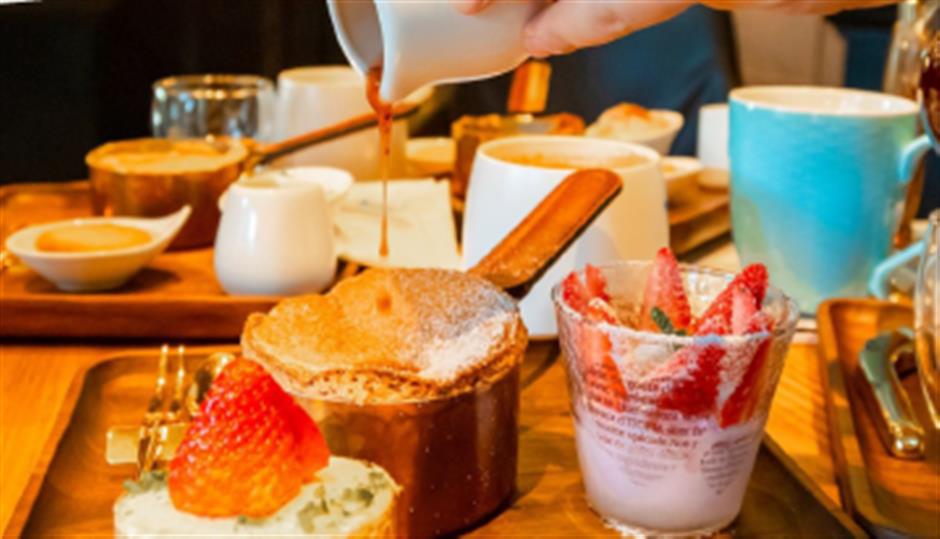 “I think our store’s location is good,” Zhang said. “Here in Minhang, it’s less crowded than downtown and we have a more leisure sense.”

In the past the customers were workers from the surrounding area, but now the café is seeing more residents from nearby neighborhoods.

“People visit us because they love what we serve,” said Zhang. “We have seasonal soufflés, and when it gets hot, we prepare iced drip coffee that takes 16 hours to make.”

Another popular venue is Alpha Coffee, located in a street-side container painted green in a neighborhood where many Koreans live.

It was a natural choice when Park Sung Joo and his Korean partners decided to open a café. 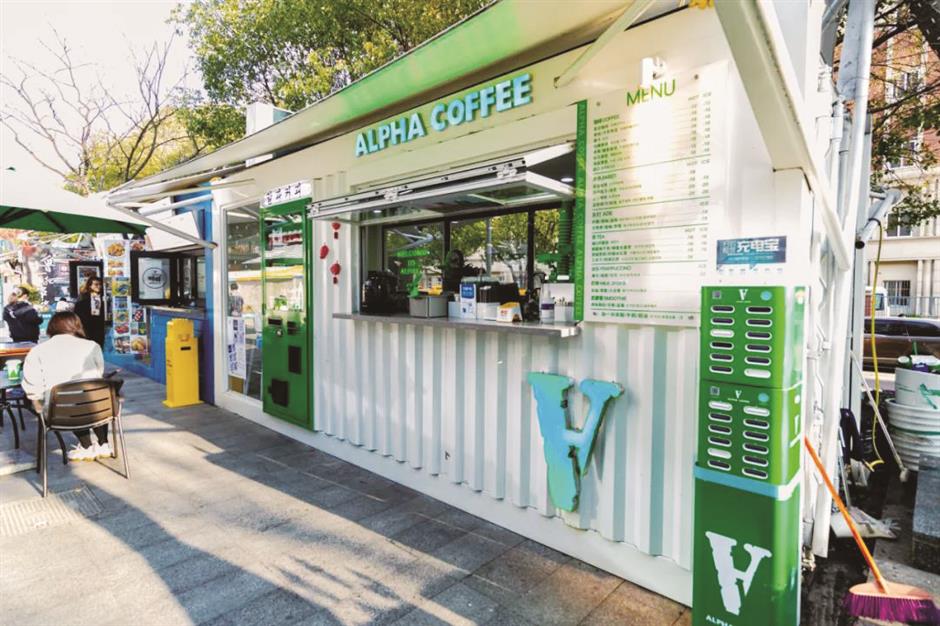 “We can sell up to 2,000 cups of coffee a day, and plenty of our customers are those who come regularly,” Park said.

They chose a street-side location rather than a mall to keep costs down and make it more convenient to catch passers-by.

Park said the green color of the café is an eye-catcher and also a color easy on the eyes.

Each cup of coffee is sold for 20 yuan (US$3), and take-out cups have been delicately designed. The team is planning on launching new products, including tea with Indian spices.

Alpha Coffee opened in December 2019, just before coronavirus hit the city. It managed to survive the pandemic and went on to open two more outlets.

The original team of three has expanded to more than 20 members at the same time.

“There are plenty of cafés in the neighborhood,” said Ji, “but ours is definitely different from the others.”

She and her six partners are all mothers who have known each other for most of their lives and wanted something to do together after their children began attending school.

As one of them is involved in a coffee farm, or finca, in Central America, the group decided to leverage that advantage and import coffee beans from the farm to run a café.

“We planned to seek a spot in the urban area, but traffic and parking were problems,” Ji said. “In the end, we settled for the Xinhong Subdistrict near where we live.”

The café officially opened in March 2020. Since last summer, Finca has expanded beyond coffee to operate a salon for stay-at-home mothers to get together to talk and do crafts.

At Mixc Mall, the Seesaw café serves customers from an open counter that allows customers to watch the coffee-making process behind it.

This chain specialty coffee brand was started in 2012, but the Mixc outlet opened with the mall in 2017.

The owners had doubts at first about the sustainability of the outlet, but their fears proved unfounded. The café is doing brisk business.

It mainly features Italian coffee, like expresso, though seasonal variations are offered.

“A chain specialty coffee store needs to maintain stable quality,” said Yan Bo, a barista at Seesaw. “That depends on whether quality coffee beans are available in large volumes and whether innovations are successful.”

The brand has tried to promote what is calls a “Chinese flavor” by using beans grown in Yunnan Province in southwestern China and by developing roasting techniques based on the Chinese tea fermentation process.

Zhang Sheng, operator of a café called Be:Bridge, said he is striving for an impressive, innovative café.

“White-collar workers want good health in addition to coffee,” Zhang said. “In the mall where we are located, there many cafés and two light-meal shops, but I am the only one with fresh juice available.” 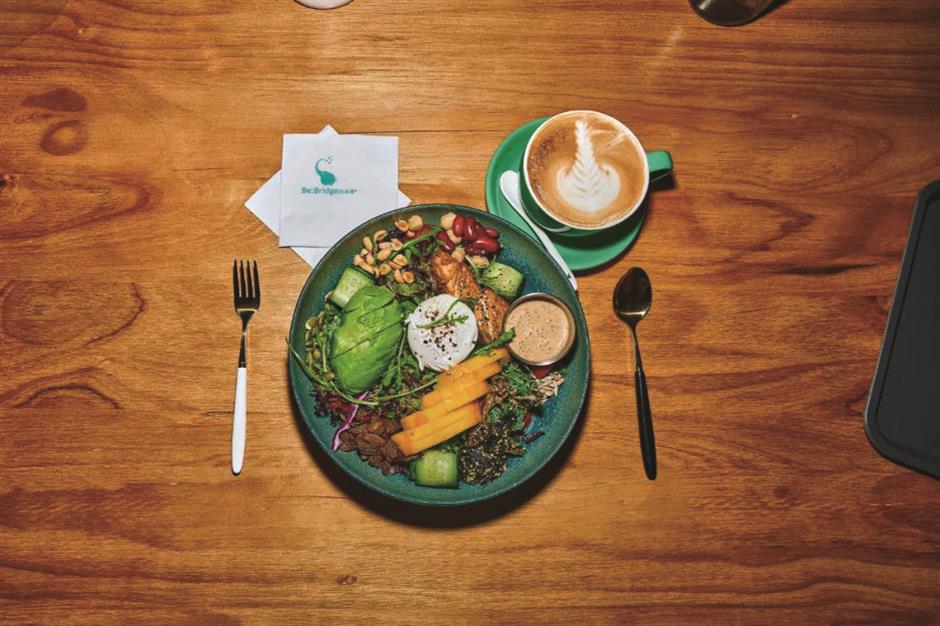 The interior design is a relaxing light blue. The wall menus are posted with uplifting sayings, like “Take good care of yourself despite hard work.”

The staff are quick to remember the preferences of regular customers.

Like the store name suggests, Zhang said the café serves as a bridge among people and is a place where customers feel comfortable and welcome.

“We are now developing a menu that will include breakfast and afternoon tea,” he said, adding that a delivery service will be added later.

Have a taste of coffee in Minhang