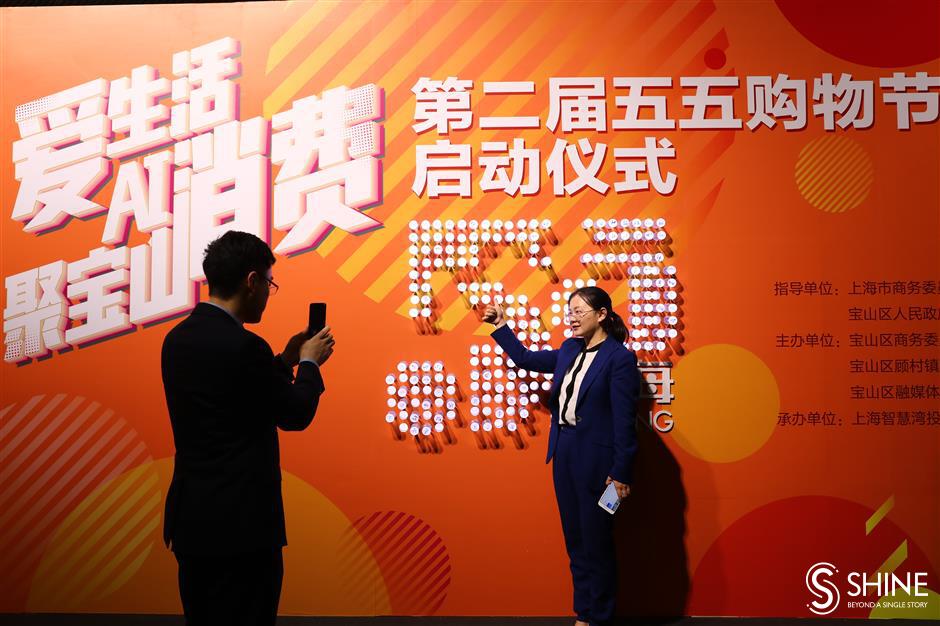 Under strict COVID-19 prevention measures, this year’s shopping festival, themed “Life, AI and Baoshan,” will run through the end of June with a total of 258 events.

It aims to enhance the influence and competence of domestic brands, create an intelligent consumption system and realize Baoshan’s ambition to become the main bridgehead of Shanghai’s sci­entific innovation center construction campaign, the district’s commission of commerce said.

Shanghai is set to launch around 1,900 promotional activities during this year’s city-wide Double Five Shopping Festival. Compared to last year, this session will be larger, better in supply quality, wider in scope and more practical in benefiting consumers.

The annual festival in the northern dis­trict will primarily focus on new brands and products, the promotion of e-yuan — a virtual currency, the digital economy, and boosting brick and mortar stores.

A swathe of new stores will be launched in the district during the fes­tival. Muji Apartment, Alibaba Local Life, Laike Go-karting and Round 1 will reach agreements with local shopping malls and wet markets in Baoshan during the festival’s launching ceremony.

Domestic cosmetics and clothing brands based in Baoshan, such as Han­shan Ceramics, Let’s talk glass, Inoherb, Xiaohan Clothes and Origin Water, will release new products during the festi­val. The business environment will be further optimized to encourage famous international and original designer brands to set up shop in Baoshan.

As a highlight, Baoshan will release new e-yuan sceneries at the opening ceremony. The district has signed coop­erative agreements with six banks in the district that will promote the electronic currency in eight commercial hubs, nine innovation parks and 10 shopping complexes during the festival. E-yuan red packets and electronic coupons will be issued to further boost consumption and promote the convenient and safe payment method.

Local people can now apply at one of the six banks’ branches to be “white-listed” for digital yuan tests, and their applications can be approved in as little as three days at some banks.

The city, along with five other regions, was added to the list for China’s pilot program for the sovereign digital yuan last October. 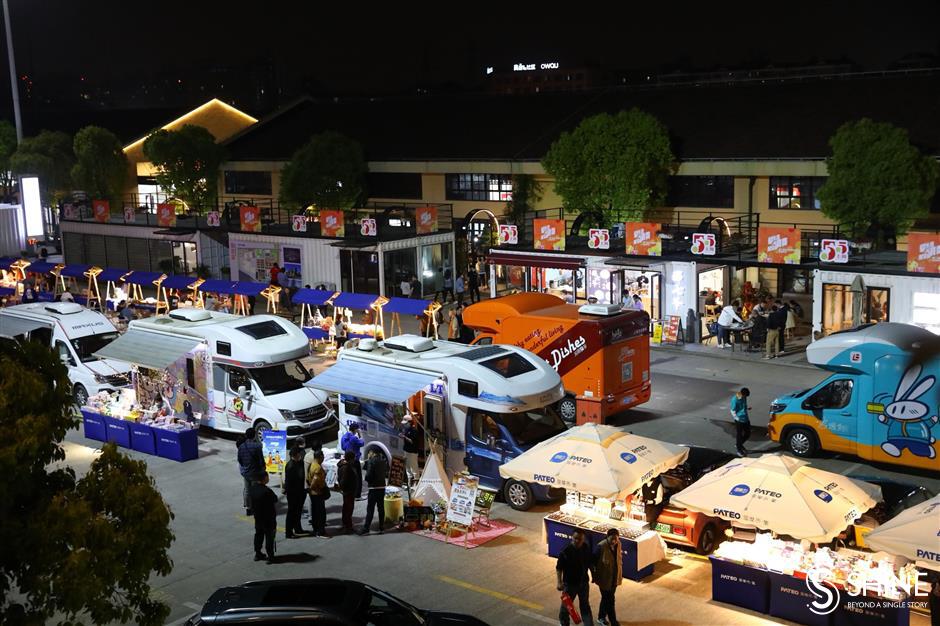 A nightlife market at the Wisdom Bay

The Baoshan commerce commission has invited the state-owned banks, including the Agricultural Bank of China and China Construction Bank, to promote the digital yuan sceneries at major shopping malls, department stores, food and medicine franchises and wet markets.

A green channel will be opened to ac­celerate the approval for the “whitelist” of the digital currency, expected to drive individual consumption, improve the attractions of Baoshan’s key commercial hubs and help the digital transformation of shopping malls and streets.

The shopping festival in Baoshan will also help to boost the digital economy sector of the district. The boom of the online economy during the coronavirus pandemic has brought more opportu­nities for tech firms and new online businesses.

New infrastructure such as 5G base stations and charging stations for elec­tric cars has helped restore the economy and is expected to drive future economic development.

Baoshan has served as the “golden ser­vant” for online new economy companies. It will further optimize the administra­tive approval process and more actively collect suggestions and requirements from e-commerce companies.

Xhange, an e-commerce women’s cloth­ing brand, has been based in Baoshan for 16 years. The district government has helped it solve many problems related to funding, marketing and offices. Last year, the Baoshan government helped to apply local hukou, or the residence permit, for two employees of the com­pany. The brand has become the city’s top online merchant for female clothing on Taobao.com, selling 5 million items in 2020 with a total value of 1.5 billion yuan (US$231,150).

During the shopping festival, Xhange and other leading e-commerce firms in Baoshan will jointly launch the second “Digital Life Festival,” with online and of­fline activities to cap new consumption trends, livestreaming and marketing events.

The festival will also help boost the dynamics of brick-and-mortar stores, which have been affected by both the on­line shopping trend and the pandemic. Major promotional campaigns will be held on Labor Day, Mother’s Day, Chil­dren’s Day, Father’s Day and the Dragon Boat Festival.

A livestreaming event at the Wisdom Bay innovation park

The Baoshan U World shopping mall will host an exhibition about the heri­tage skills of historical Luodian Town. Dragon-boat-making, kite-painting and historical cuisines will be featured along with coupons and shopping discounts.

The town dates back to the Yuan Dynasty (1206-1368) and was once the biggest and most popular marketplace in the area, known as “Golden Luodian.” However, the “golden” tag gradually faded away in the face of urban devel­opment. The events aim to restore its former popularity.

The Baoshan Wanda Plaza will launch a fashionable Chinese brands promo­tional event with big discounts on some brands. Baolong Plaza will present many interactive games and lucky drawings.

Other landmark innovation parks in Baoshan, such as Wisdom Bay, Bridge­life and Innovation Galaxy, will launch characteristic nightlife markets during the festival. Shopping complexes will be encouraged to extend business hours, while presenting stage dramas, concerts, fashion shows and eSports games to at­tract customers.

During last year’s nightlife festival in Wisdom Bay, an innovation park, about 200 stores at the innovation park took part in the event. Visitors were invited to enjoy beer, music and visit various museums along Wenzaobang River, the city’s third major waterway after Huang­pu River and Suzhou Creek.

Baoshan was once home to the city’s iron steel and other industries, and many of the nightlife sites were developed from that industrial heritage. Bridgelife Park, for example, was renovated from a vacuum flask factory, while Wisdom Bay is the former site of Shanghai’s No. 3 Wool Textile Mill.

Songnan Town will host a “new energy car festival” along with 30 4S stores. The town has also designed various events and tour routes for visitors to learn about its industrial history during the festival.

Elite Valley, for instance, was con­verted from a former import and export warehouse built in 1959. The warehouse once belonged to the Shanghai branch of China’s Complete Equipment Import and Export Company. Many of the na­tion’s foreign assistance materials were transported abroad from this site.

A well-preserved section of Songhu Railway, China’s first railway that opened in 1876, is open to the public as an ideal place to take photographs, fea­turing an old locomotive and carriages. The site now has offices for more than 60 high-tech and startup firms, and is also a recreational complex with dining and entertainment venues.

Nearby Dachang Town will host a home decoration festival, with nearly 100 brands such as Red Star Macalline, B&Q and IKEA. 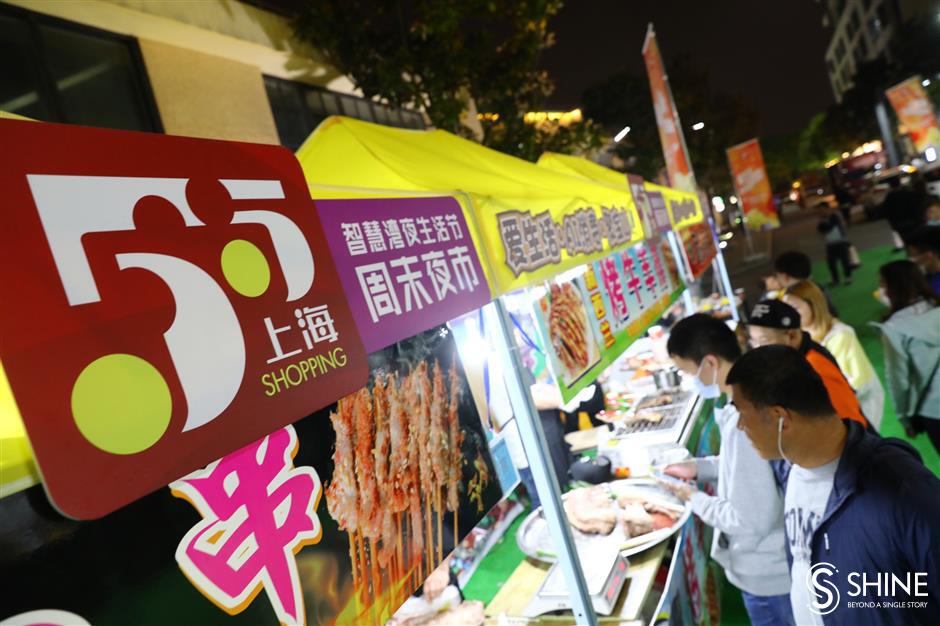 A nightlife food market at the Wisdom Bay