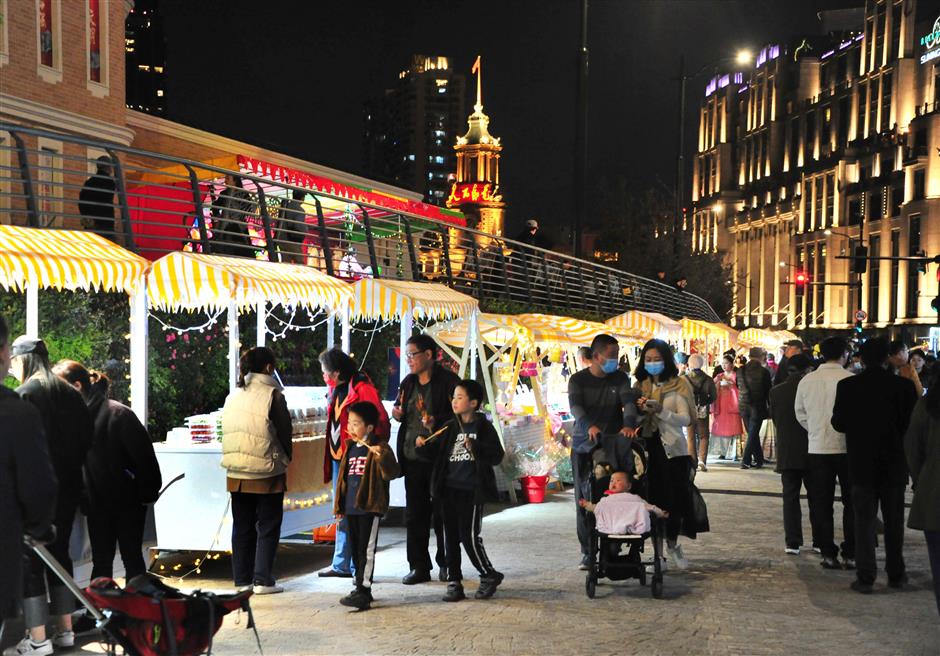 A nighttime bazaar has been launched along Suzhou Creek in Hongkou District to create a demonstration of the cultural and tourist attractions on the North Bund.

Handmade clothes, cultural souvenirs and daily commodities are available at many stalls along the pedestrian-only street, as well as food and street performances.

“The newly unveiled nightlife market aims to develop a comfortable public space during the ongoing development of the North Bund,” the Hongkou District government said. It is expected to become one of the most popular social and entertainment attractions on the North Bund.

At the opening session of the market this month, 50 models wearing hanfu walked among visitors and posed with them. Street artists and musicians presented live performances. Wine and alcohol from both home and abroad were available. 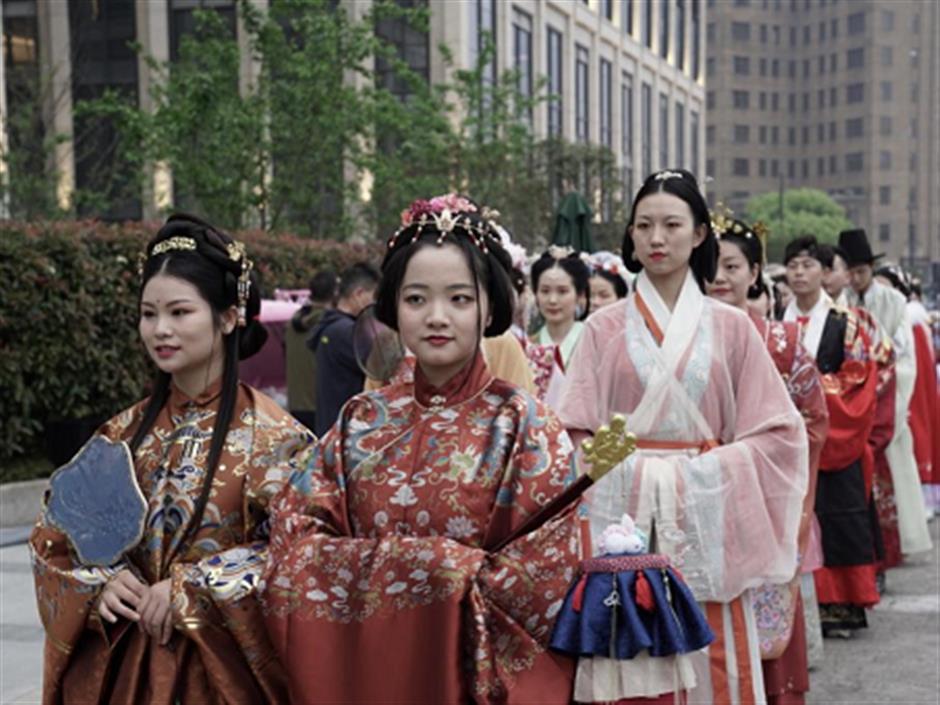 Suzhou Creek flows through six Shanghai districts and 180 years of the city’s modern history. Its redevelopment has given citizens a continuous 42-kilometer pedestrian corridor along the creek.

Beginning at the intersection of Suzhou Creek and Huangpu River, people can stroll along 900 meters of walkways next to the creek that flows through Hongkou.

The Beisuzhou Road walkway, opened in December, is one of the most scenic segments of the longer creekside path, featuring many preserved historical buildings with the former glory of the region.

The Astor House Hotel, previously known as Richard’s Hotel, was founded by the Richard family in 1846 on the Bund near Jinling Road E. It moved to its current location on Huangpu Road near the Waibaidu Bridge in 1857. The hotel once housed big names like physicist Albert Einstein, actor Charlie Chaplin and writer Edgar Snow.

It has become the China Securities Museum, because the hotel was also where the Shanghai Stock Exchange came into existence in 1990.

Established by the China Securities Regulatory Commission, the museum chronicles the development of stocks and futures since 1978, as well as earlier history dating back to the Qing Dynasty (1644-1911).

The Waibaidu Bridge, also known as Garden Bridge, was constructed in 1907 as the first large bridge in Shanghai and one of the city’s most beautiful bridges over the creek.

Nearby, several historical buildings were built on the northern banks of the creek. The iconic building that today houses the Shanghai Postal Museum opened in 1924 as Shanghai’s General Post Office.

Broadway Mansions, now a hotel, was built in 1934 as a modernist icon. A year later, the Embankment Building, once known as the “No. 1 Apartment Building of the Far East,” was completed. It is still a residential complex, and is receiving a major facelift to restore its original look.

The city’s earliest riverview residence along Suzhou Creek was financed by real estate tycoon Victor Sassoon. Its horizontal “S” design is consistent with the creek’s curves and represents the “S” in Sassoon.

The building’s architectural and historical value qualified it for the second batch of city-level protected buildings.

Sassoon demolished the alley community on Beisuzhou Road that was financed by his company in 1887, and replaced it with the eight-story Embankment — the largest in the city at the time.

One of the few upscale buildings with a view of the creek, it was equipped with eight entrances, seven staircases, nine elevators, a heating system, a swimming pool and more than 700 rooms, mostly rented to foreigners.

The Beisuzhou Road portion along the creek has been converted into a pedestrian-only street. The road and riverside pathway have been greatly expanded. 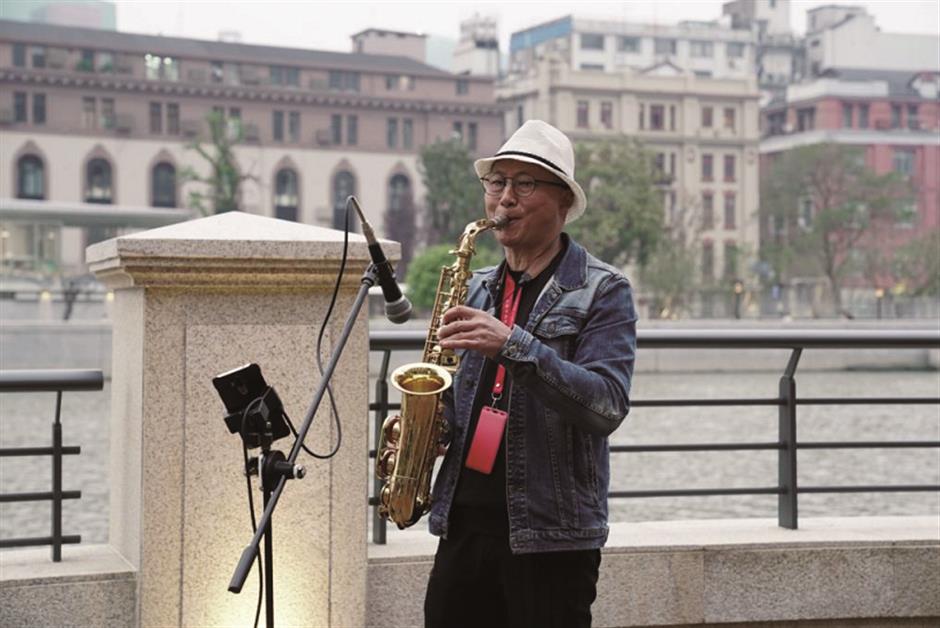 Along the river, the stone-paved pedestrian street and lighting in the style of early gas lamps give a pleasing, uniform look to the landscape. A variety of trees and flowers have replaced monotonous evergreen trees and shrubs, turning the street into a garden-like public area.

Sculptures and installations that reflect the history of the area enhance the environment. They include the sculpture of a newsboy, a green postman’s bicycle and manhole covers adorned with iconic pictures that appeared on old souvenir bags from Shanghai.

A new round of development will commence on the North Bund waterfront in Hongkou in a bid to recapture its historical grandeur as a gathering place for the world’s top shipping businesses and intellectuals.

The riverside region along the Huangpu River is part of Shanghai’s “golden triangle,” along with the Lujiazui financial hub in the Pudong New Area and the Bund in Huangpu District. The latest development blueprint released by the city’s planning authority includes more economic, scientific and cultural elements to create a “world-class sitting room.”

About 8.4 million square meters of new office space has been planned that will be home to nearly 100 international companies and organizations. The new office buildings will generate annual tax revenue of more than 100 million yuan (US$15.42 million), while the number of multinational firms based in the riverside region will significantly expand.

As a highlight, construction will begin on a 480-meter high-rise building, covering an area of about 350,000 square meters. The building is earmarked to drive the development of high-end industries and become a home to global enterprises.

The plot of land near Dantu, Dongchangzhi, Gaoyang and Tangshan roads will see 24 percent of its area used for commercial enterprise, restaurants and hotels, while the rest will be used for offices.

Beisuzhou Road has been designated as a top-class fashion center featuring haipai, or the West-meets-East Shanghai-style culture, and traditional Chinese culture, according to district officials.

More themed activities will be launched along the pedestrian street to help boost the businesses in the surrounding areas and highlight the charm of the North Bund region, the district government said.