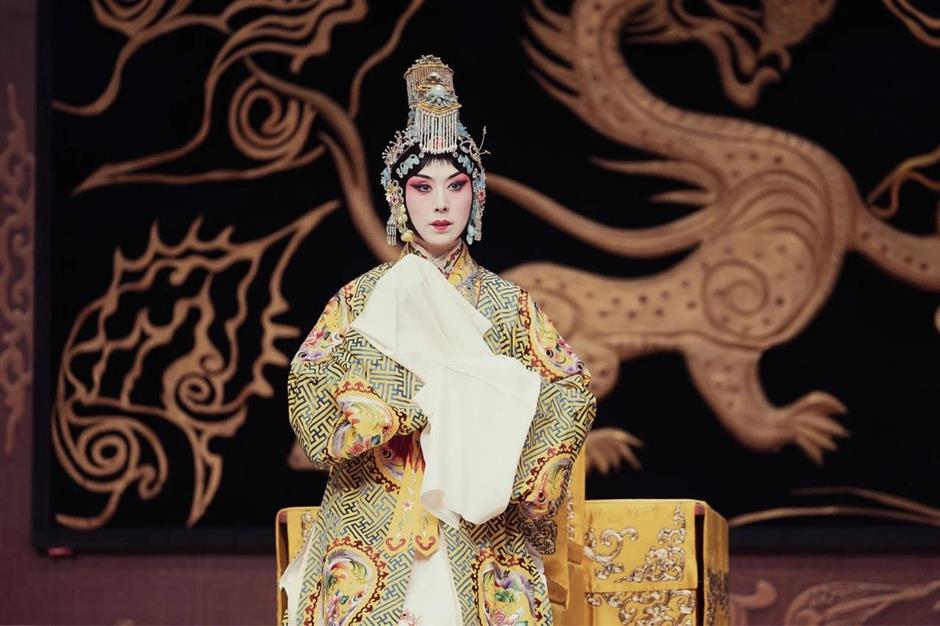 Instead of waiting for hours at landmark tourist sites or being jammed on intercity expressways, Shanghai resident Richard Wu chose to enrich his Labor Day holiday with concerts, movies and musicals.

During the five-day holiday, the senior employee at a downtown human resources company attended a free lawn concert presented by the China Philharmonic Orchestra, took his 3-year-old son to a puppet show at Shanghai Children’s Art Theater and watched two movies with his wife and son.

Tickets were easy to buy at multiple “Show Life” service stations, with government subsidies of up to 200 yuan (US$30.9) for each show, Wu said.

“Though we cannot travel abroad due to the pandemic, everyone is happy with the ‘cultural journey’ of downtown theaters and stages,” said Wu, 35.

Curtains are rising again on downtown theaters after performances were suspended due to the coronavirus outbreak.

Major theaters and cultural venues within Show Life, a theater and art performance zone in downtown Huangpu District, have attracted large crowds during the holiday.

Close to 45,000 people are expected to visit the Show Life zone during the holiday, with anticipated box office receipts of 6.46 million yuan.

The 12 professional theaters and 11 performance stages are presenting 77 shows with 180 performance sessions throughout the holiday. The average attendance has reached 75 percent.

The performances primarily cover the history of the Communist Party of China, family and traditional Chinese culture, according to the Huangpu Culture and Tourism Bureau. Musicals, stage dramas, traditional Chinese operas and concerts have been performed at various downtown venues. 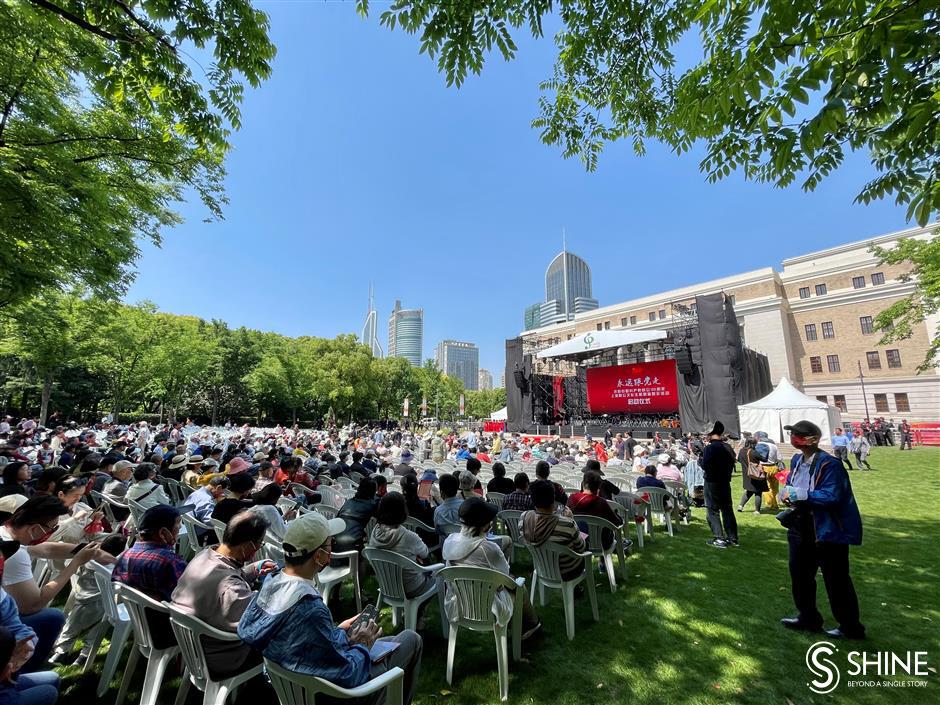 People at the Shanghai City Lawn Concert on May 1.

The downtown theater district was named Show Life in 2019, with invitations to performers and producers from around the world. The area near People's Square in Huangpu plans to host 15,000 performances every year — part of the city government’s ambition to make Shanghai the “Performance Capital of Asia.”

The popularity of Shanghai’s downtown theaters and stages was largely restored in the first quarter of 2021, following suspended operations and seating limitations amid the pandemic, said Xu Yanqing, director of the culture and tourism bureau.

“An increasing number of people have returned to the theater after the 50 percent limitation on theaters’ seating capacities was revoked on March 18,” said Xu.

The May Day holiday has further boosted the restoration of the cultural venues.

The Shanghai City Lawn Concert has become one of the most popular cultural events during the holiday.

While large flocks of people queued to watch the light show on the Bund, a big crowd of music lovers was lining up at the south of the Shanghai Concert Hall on Yan'an Road E. for Shanghai's annual city lawn concert.

The concert is part of a series of public performances that celebrate the 100th anniversary of the founding of the Communist Party of China (CPC).

Three outdoor concerts were staged with free admission over the holiday, featuring more than 30 classic songs about China's revolutionary campaigns and the CPC.

Free tickets were available via WeChat, and live performances were broadcast through the official WeChat account — Culture Cloud. 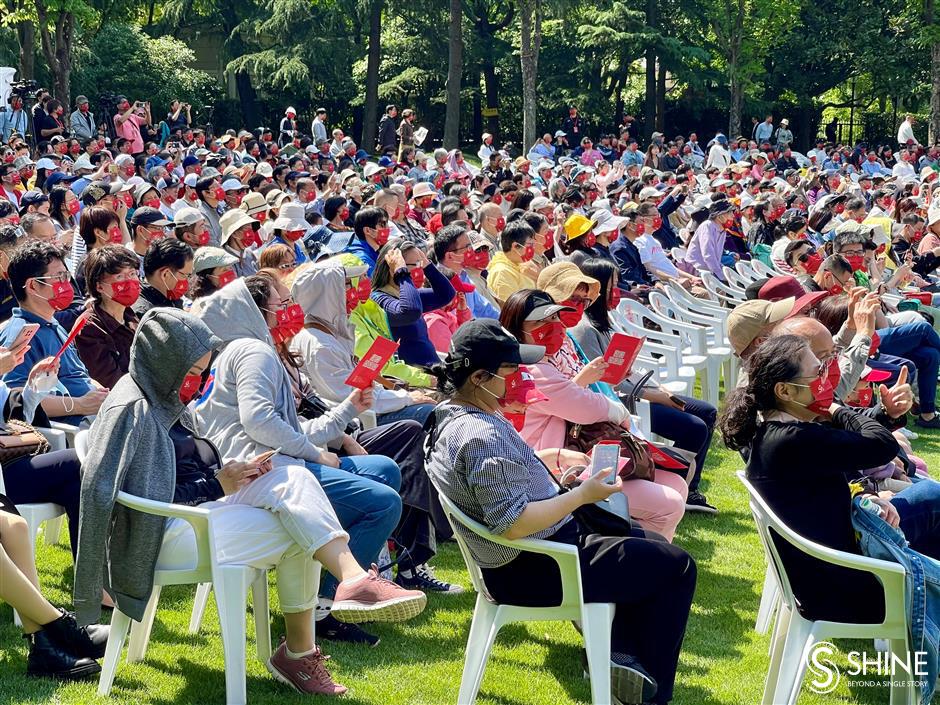 The opening concert was presented by the Changsha Symphony Orchestra from Hunan Province, hometown of Chairman Mao Zedong.

“We are thrilled to be able to perform on the downtown lawn of Shanghai,” said Wang Zhi, head of the orchestra. “We’d like to return to Show Life to present more performances."

About 150 musicians and singers from the orchestra performed classic folk songs such as “Dongfanghong,” or “Oriental Red,” and “Sing a Folk Song to the Party.” Several hundred people in the audience sang along. More than 110,000 watched the live performance online.

The national orchestra performed the second concert at 2pm on Sunday, while the Shanghai Philharmonic Orchestra staged the third concert on the lawn today.

The lawn concerts have been staged for eight years, with a total of about 200 concerts. Tens of thousands of people have attended the annual concerts.

Comedy shows and stage dramas for family audiences also proved to be popular during the holiday.

Classic comedies produced by Mahua FunAge — “Hello, Mrs Money” and “Trust or Die” — are being performed on the Shanghai Gong Stage. The comedies have been performed more than 300 times across the country.

Talk shows from popular troupes have been staged at the Shanghai Great World and Jazz at Lincoln Center Shanghai.

As the only professional Show Life stage for children, the Shanghai Children’s Art Theater enables children to learn about the traditional culture and heritage skills of China’s ethnic groups. 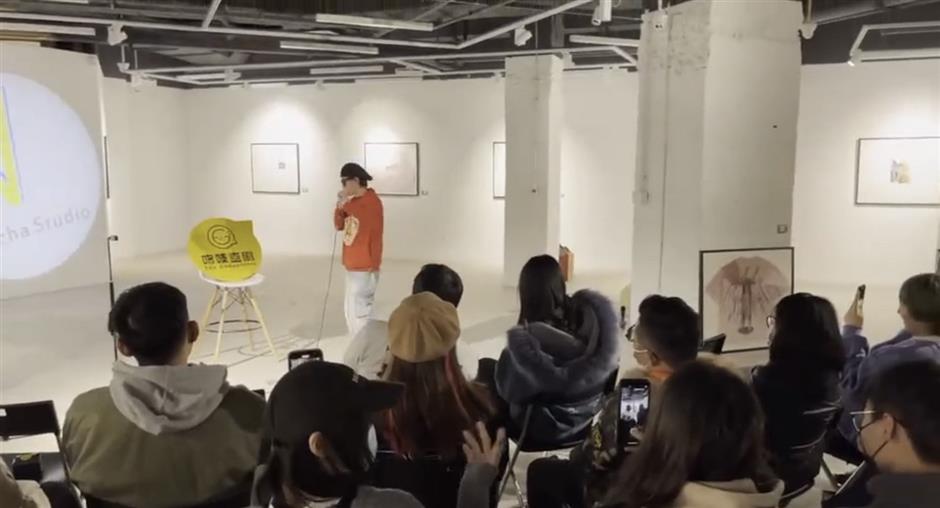 A talk show in a small performance space during the Labor Day holiday.

A boat-shaped house and bamboo dance, as well as the traditional lifestyle and artwork of the Li ethnic group are on display for children during the traditional Chinese culture carnival “Baby Loves China." Kids can also drill into wood to make fire under a 3-meter-tall coconut tree, and weave traditional Li textiles.

“The theater is not only for performances, but also a platform to promote Chinese culture,” said Cao Yuwei, an official in charge of the carnival.

Traditional Chinese operas have also been showcased during the holiday.

The first Yuyuan Garden Traditional Chinese Opera Festival has taken place between Saturday and Wednesday. More than 10 modern and traditional operas, as well as puppet shows, are being staged at Beaufort Terrace, an antique-style opera stage at the Yuyuan Garden Malls.

The classic Kunqu Opera “Six Chapters of a Floating Life,” an immersive real-scene performance, Pingtan, a traditional form of musical storytelling that originated in Suzhou, cross talks and satirical dramas are also being presented.

The Shanghai Grand Theater presented the Peking Opera classics “Farewell My Concubine” and “The Legend of White Snake” for three days during the holiday. Local Peking Opera artist Shi Yihong staged her masterpiece "Suo Lin Nang" at the theater in the center of Show Life.

“As the leading Show Life theater, we stage traditional operas that resonate with the emotions of modern audiences,” said Zhang Xiaoding, the theater's general manager. 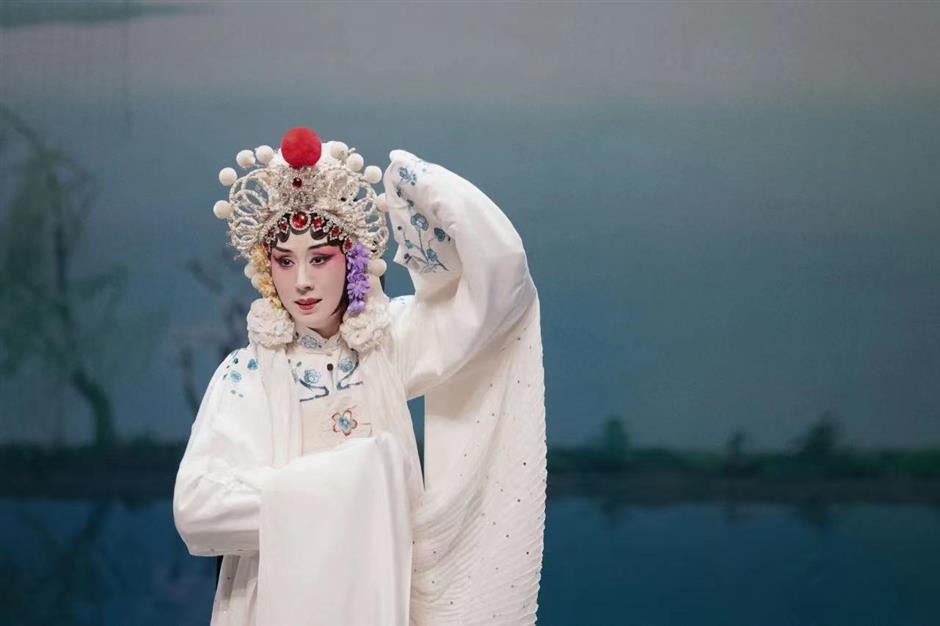 The Peking Opera classic "The Legend of White Snake."

In addition to performances and shows, the Sinan Mansions has launched a pop-up bookstore on Huaihai Road M. to display books on the history of the CPC, while also hosting regular reading salons and guided tours of nearby revolutionary sites.

The Original Aspiration store is near Yuyangli, a former residential complex where Marxism was initially promoted in China and the Chinese Communist Youth League was founded in 1920.

It has more than 1,000 books and 100 products related to the Party’s origins in Shanghai. Readers can enjoy virtual reality tours of local historical sites or attend regular reading events.

More than 30 performances and shows at Show Life theaters are being subsidized by the Huangpu government. Locals and tourists can purchase discounted tickets at 16 service stations near the theaters.

Tickets for several popular performances, such as the symphony concert “Forever Yellow River” at the Shanghai Opera House, as well as stage dramas “Red Starting Point,” ”White Deer Plain” and "Tomb Raider," are priced at about 80 yuan with subsidies of up to 200 yuan.

The Show Life zone, which represents a new lifestyle for arts and performances, has become one of the densest theater clusters on the Chinese mainland, according to the culture and tourism bureau.

Posters of popular shows and performances during the Labor Day holiday.