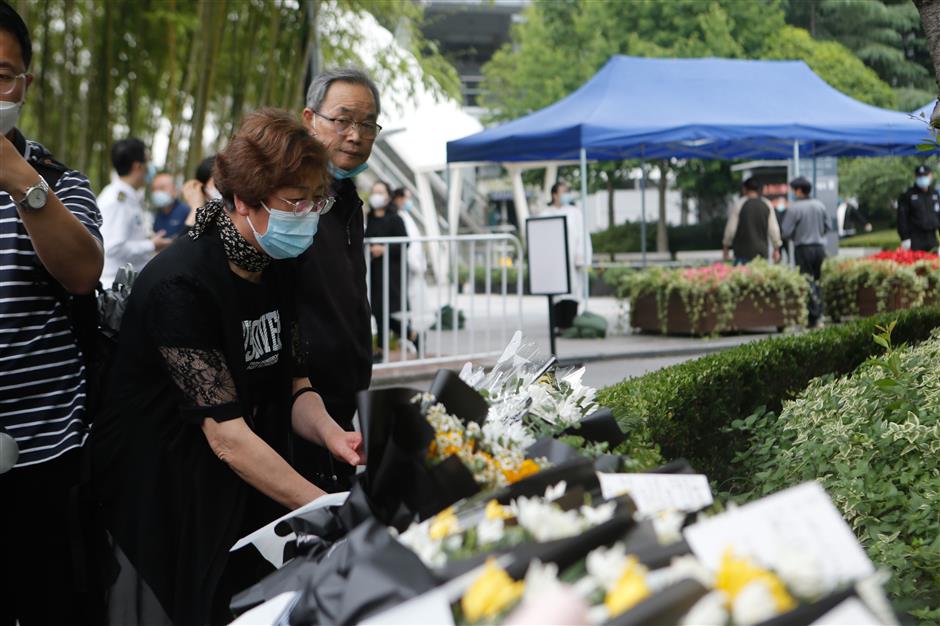 A woman lays flowers at a memorial site at the Shanghai Longhua Funeral Parlor to bid farewell to Wu Mengchao.

Patients, students, colleagues and citizens in Shanghai braved the rain this morning to bid farewell to Wu Mengchao, known as the "father of Chinese hepatobiliary surgery," who died on May 22 at the age of 99.

A long line of people dressed in black showed up at the Shanghai Longhua Funeral Parlor and laid flowers at a memorial site.

"I've been living for an additional 23 years thanks to Wu. I will remember his skill and morality for life," said a former patient of Wu surnamed Luo, 71, who was diagnosed with liver cancer in 1998 and rejected by many hospitals. Wu later conducted a successful surgery and cured him.

"He gave me a second chance in life," Luo said in tears.

Chen Xunru, 80, one of the first postgraduates to study under Wu, came to bid farewell to his mentor from southwest Yunnan Province.

"Wu was very strict with us despite the poor research conditions at that time," Chen recalled.

Sun Qihong, another student of Wu's, said he wished his teacher could finally get some rest.

"We will keep fighting liver cancer, which he fought for most of his life," Sun said. He is doing scientific research in Hangzhou in neighboring Zhejiang Province after returning from his postdoctoral studies in the United States. 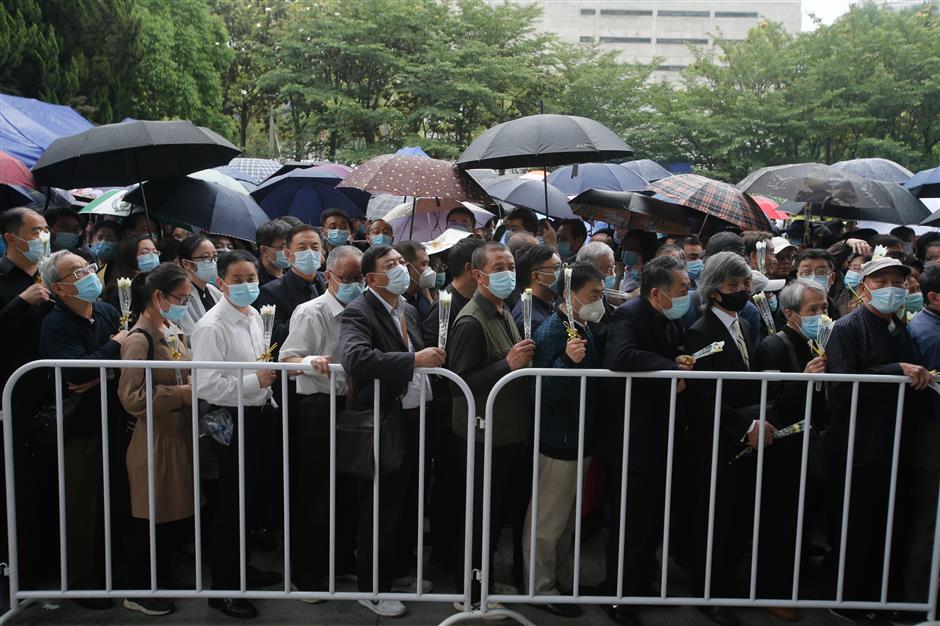 A long line of people dressed in black wait at the Shanghai Longhua Funeral Parlor this morning.

Wu, an academic with the Chinese Academy of Sciences, established a unique system of liver surgery and devoted himself to saving people's lives for nearly eight decades. He continued working into his 90s, seeing patients and performing operations until two years ago.

In 2005, Wu was honored with China's top science and technology award. He created the theoretical basis for China's liver surgery and developed more than 30 medical innovations. Under his leadership, the diagnosis, cure and survival rates of liver surgery in China reached the world's top standard.

Wu was born in Minqing County in southeast China's Fujian Province. He enrolled at Tongji University's School of Medicine (currently Huazhong University of Science and Technology's Tongji Medical College) in 1943 and started work at the No. 1 Affiliated Hospital of the Second Military Medical University (Changhai Hospital) after graduation.

He saved the lives of some 15,000 patients throughout his career. One liver cancer patient survived for a record 45 years after surgery.

Years spent in the operating room led to his fingers and toes becoming permanently disfigured.

When he retired in 2019 at the age of 97, Wu said: "The four right choices – returning to my homeland, studying medicine as well as joining the army and the Communist Party of China – made me truly realize the value of my life."

He added: "I will keep seeing patients, doing surgery and reliving the pain of patients as long as my health allows." 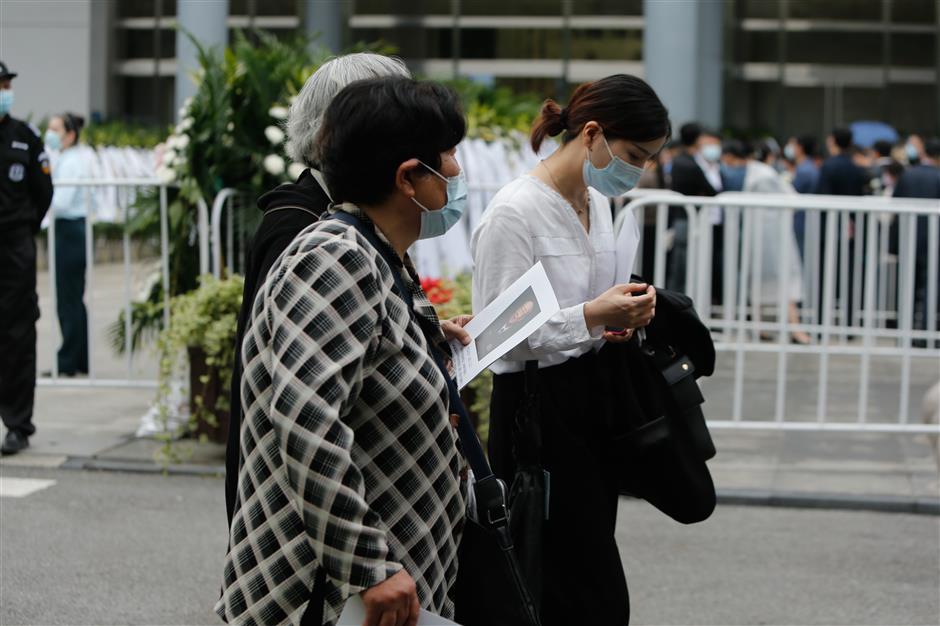 Many people come to commemorate the "father of Chinese hepatobiliary surgery." 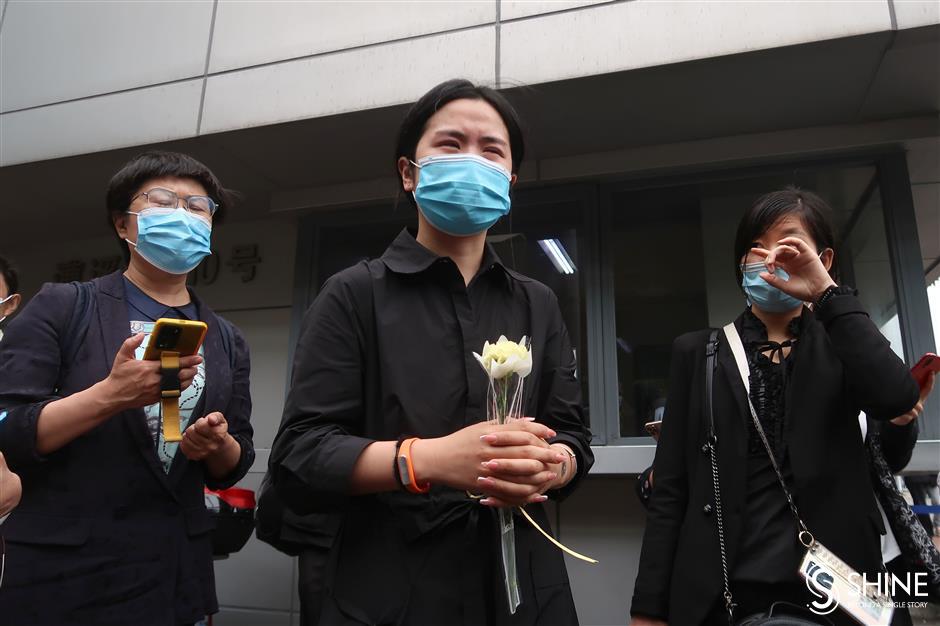 People in tears outside the funeral parlor

At the age of 5, Wu went with his family to Malaysia. He helped his father cook rice noodles and collect rubber.

Later, Wu donated money and encouraged other overseas Chinese to support China's War of Resistance Against Japanese Aggression (1931-1945). A telegram of appreciation from Chairman Mao Zedong and General Zhu De strengthened his determination to return to China.

He was recruited by the Tongji University Middle School in Yunnan Province, and later studied medicine at the university's medical school.

Wu joined the CPC and the People's Liberation Army in 1956. In the same year, he decided to focus on hepatobiliary surgery under the guidance of his mentor Qiu Fazu, the "father of Chinese surgery."

China has a high rate of liver cancer, with more than half of the 620,000 new cases around the world. The field of prevention and treatment of liver cancers remained untouched in China by the 1950s.

Wu was inspired by a foreign expert who asserted that China needed at least three decades to reach the world's average standard in hepatic surgery.

He first translated an English version of "Introduction of Hepatobiliary Surgery" with colleague Fang Zhiyang. The book was published in 1958 as China's first medical publication in the field.

In 1959, Wu melted table tennis balls and injected the material into a liver to create the first detailed liver specimen in the country. After researching more than 100 such specimens, he created the innovative principle of dividing the liver into "five leaves and four sections" for the convenience of surgery.

He conducted China's first successful hepatobiliary surgery the same year by removing a tumor from a patient's liver. 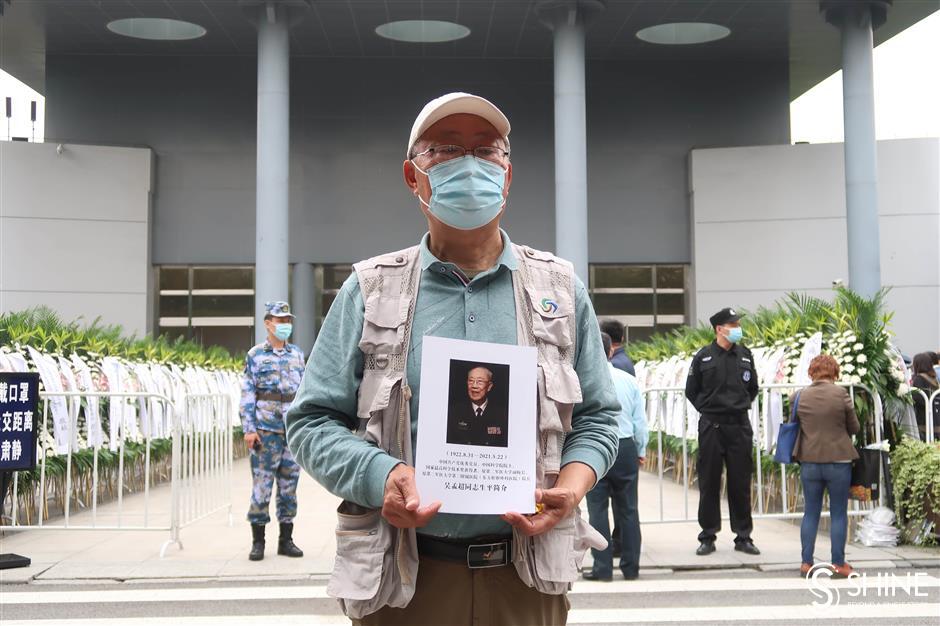 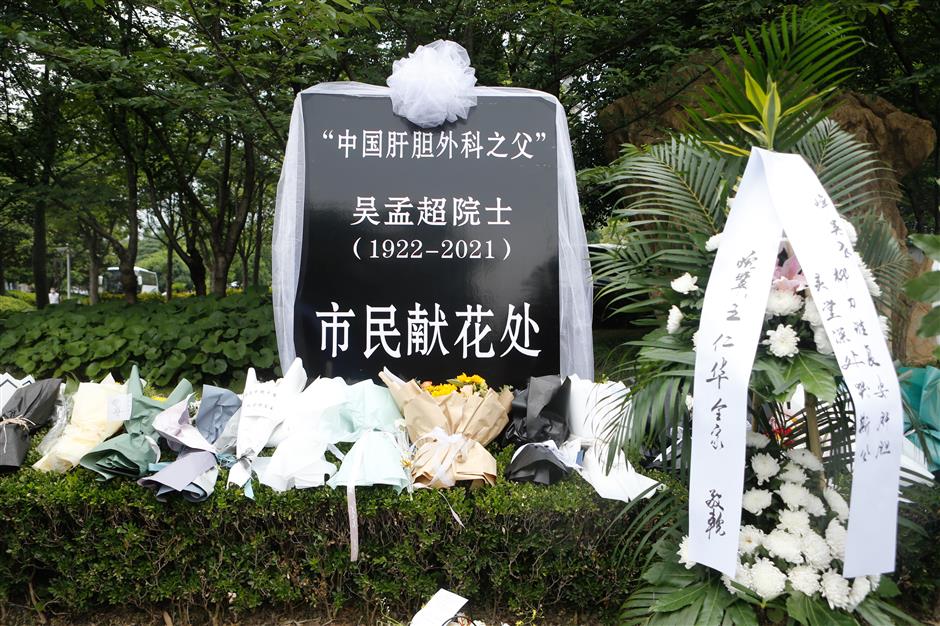 A site for people to lay flowers for Wu.

Wu also developed a method for stopping the blood in the liver under normal temperatures for 15 minutes during surgery. It became the easiest, most efficient and safest method for hepatobiliary surgery. Previously, patients had to suffer from being anesthetized under low temperature before liver surgery.

He gained a nationwide reputation in February 1963 by removing a tumor in the middle leaf of the liver, which had been a restricted zone for surgery due to the extremely high risk. The first-in-the-world surgery took six hours.

In 1975, Wu set a new record by removing an 18-kilogram tumor from the liver of a patient in Xi'an, Shaanxi Province. The patient lived a healthy life for 40 years after the 12-hour operation.

Wu was said to be the world's only doctor over the age of 90 who still performed surgeries. As recently as three years ago, he still performed three surgeries on average every day. He said his heart felt empty when he didn't enter the operating room for a couple of days.

After winning the nation's top science award, Wu donated the 6-million-yuan (US$936,600) prize to the country, and submitted a proposal along with six other academics on research into hepatitis and liver cancer. The project has been listed as a key topic of China's scientific research.

He said his biggest wish was to cultivate more professionals with better skills. He trained more than 200 specialists, including several academics and top scholars, who have become the main force behind China's hepatobiliary surgery.

In 2010, a minor planet was named after Wu in honor of his achievements. 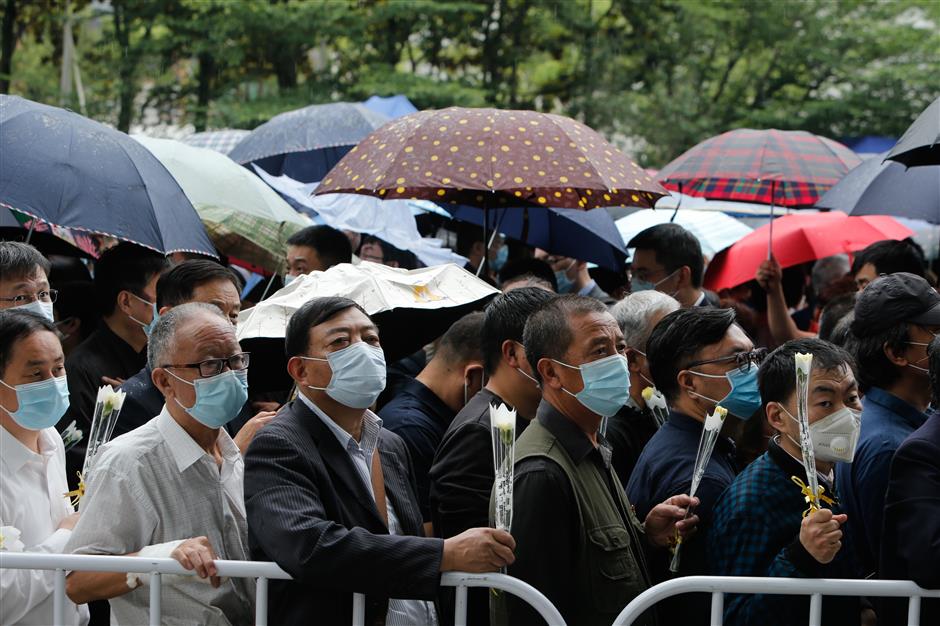 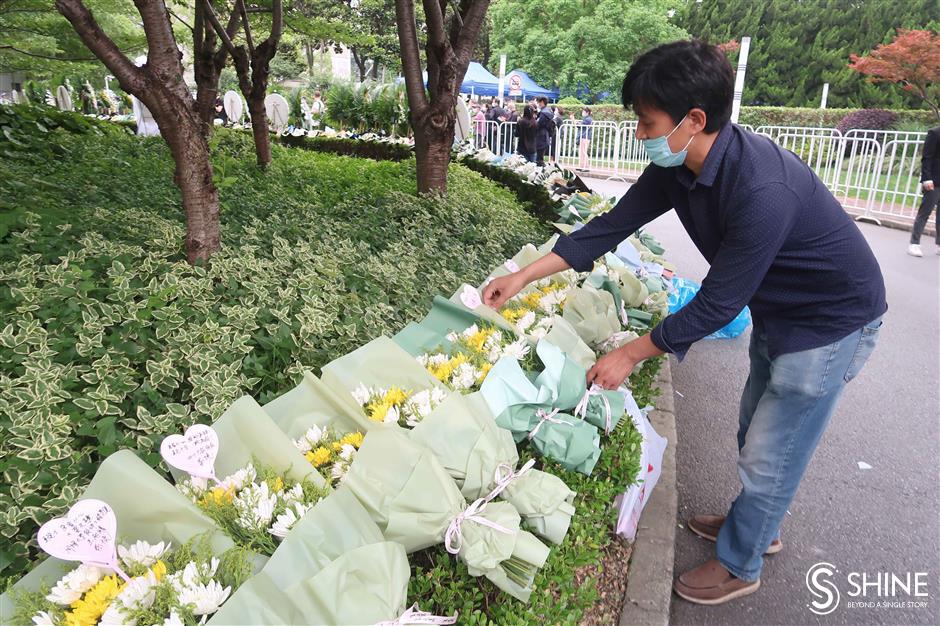 Flowers are piled outside the funeral parlor.