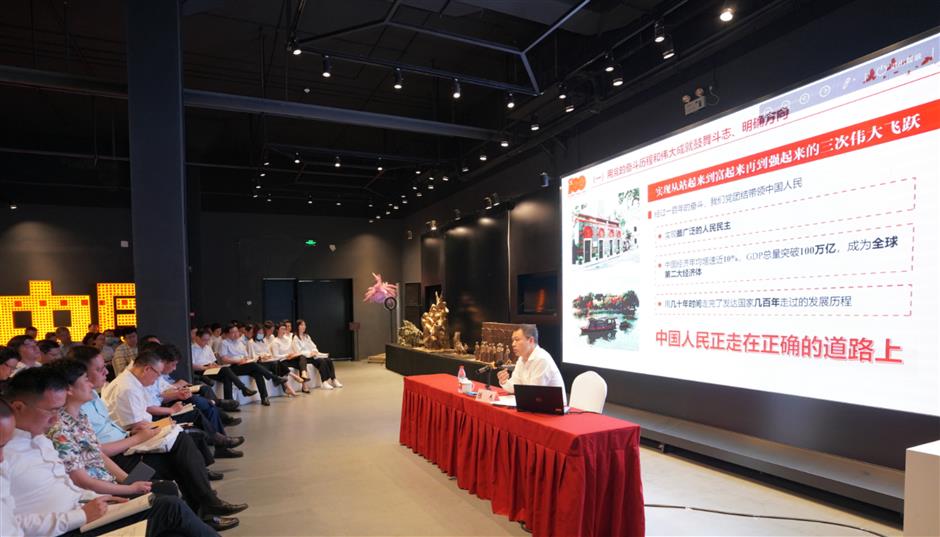 Chen Jie, Party secretary of Baoshan, gives a lecture on CPC history in the district.

An additional 100 elevators will be installed in old residential buildings in Shanghai's north Baoshan District this year, part of a major campaign to solve difficulties for residents.

Public opinions will be solicited this year in 1,350 old residential high-rises built some two decades ago regarding installation of new elevators for the convenience of the elderly, according to the district's housing authority.

The district has streamlined the application and approval process for more elevators installed in old buildings.

The northern district once known for its iron-steel industry aims to complete more than 3,000 public benefit projects covering parking, living and transportation by the end of the year. Over 800 key projects will also be finished to drive the transformation of its traditional heavy industry and make the district a scientific innovation hub.

The district government has been collecting examples of daily life difficulties from residents through the city's 12345 hotline and official website of the Baoshan government. Parking difficulties, elevator installations and senior care are among the public's top concerns.

The district will also focus on several key construction projects, including a major vaccination production line for CanSinoBIO, one of the approved producers of the COVID-19 vaccine, in the Baoshan Industrial Park.

Meanwhile, the district has launched a number of online and offline lectures on the history of the Communist Party of China and Baoshan. Seven tour routes along key CPC heritage sites and industrial relics in Baoshan have been released. More than a million people have taken part in organized tours along the routes.

Chen Jie, Party secretary of Baoshan, gave a lecture about CPC history in the district at Wisdom Bay, the city's first scientific and cultural complex featuring 3D printing technologies, renovated from the former site of Shanghai's No. 3 wool textile mill.

Chen noted that Baoshan served as a pioneer during the reform and opening-up period, as well as a leading district to drive the integrated development of urban and rural areas. He said the district aims to become the frontier for Shanghai's ambition to become a scientific innovation center with global influence.

The park aims to lead another round of industrial revolution, in addition to the once prosperous textile business more than half a century ago, with the world's leading 3D printing firms and technologies.