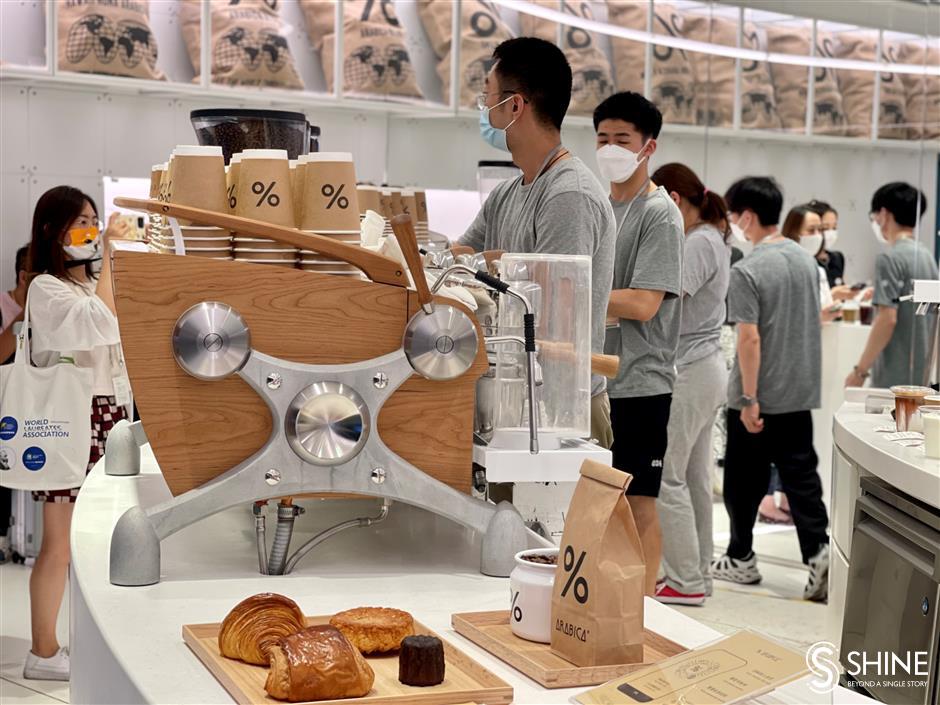 Many international brands have opened their first airport outlets at Shanghai's Pudong and Hongqiao airports as passenger volumes recover to pre-pandemic levels.

The number of travelers has started to rebound during the summer travel peak from the influence of COVID-19.

Pudong and Hongqiao International Airports handled 36.06 million passengers in the first half of the year, 97 percent of whom were domestic travelers, the Shanghai Airport Authority said on Thursday.

An average of 1,775 flights have taken off and landed at the ports since July, the same level as in 2019. The airports have handled about 220,000 passengers a day.

To meet the demand of travelers and boost consumption at terminals, the airports have introduced multiple popular or online sensation brands since early 2021, the authority said.

Popular Japanese beverage brand Arabica, for instance, launched its first airport outlet at the T2 terminal at Hongqiao in May. It features its classic pure white decoration style and sells coffee and breads to mainly business travelers. Two snacks are designed especially for the airport store. 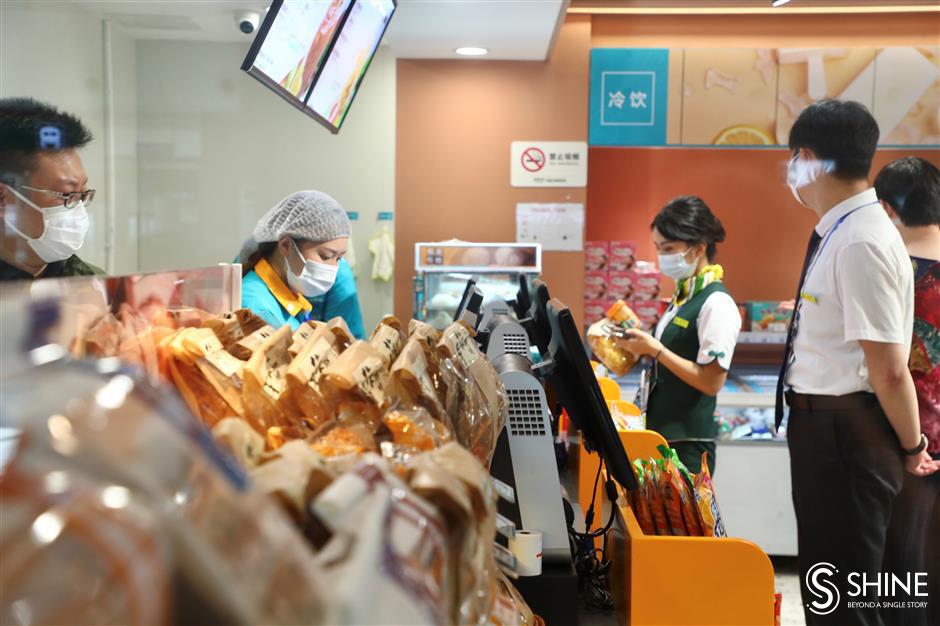 "The outlet has proved to be popular among travelers. The sales volume is even better than its downtown outlets," said Dicky Cheung, a retail management official at the airport.

"It is a win-win strategy for online sensation brands to open outlets at the airport," Cheung said. The brand has the best window to promote its products at the airport. Business travelers also have the chance to shop at a popular store they may have no time to visit downtown, he added.

The Italian chocolate brand Venchi, originated in 1878, has also opened its first airport store near the Japanese coffee shop. Over 50 kinds of chocolates and a special gift box are available to meet gift needs of passengers, plus ice-creams.

It is the first airport store for Venchi in the Asia Pacific region, said Zhang Li, a sales manager of the brand.

Since the store was opened on May 27, the sales of chocolates have been beyond expectations. Many travelers hope to bring some special gifts home, she added.

Apart from the airport outlet, Venchi has opened seven stores in Shanghai, mainly at downtown landmarks such as Xintiandi, Lujiazui and Xujiahui. 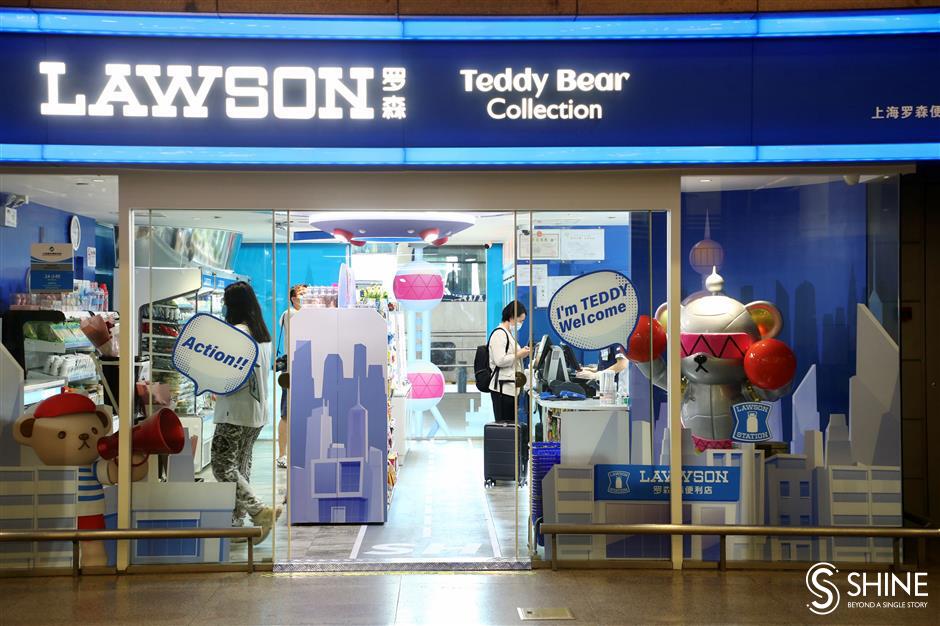 A new Teddy Bear-themed Lawson store at the Pudong airport

The Hongqiao airport has attracted 23 brands from both home and abroad that have opened their first airport outlets in China.

It became the first domestic airport to get an outlet of New York City-based fast-food chain Shake Shack in May 2020, initiating the trend for more global and internet popular stores to shift their focuses.

"The business environment is important to attract the brands who want to have the same popular neighbors at the terminals," Cheung said.

Despite the airport outlets having limited space, most of them turned out to be even more popular than their downtown franchises, according to Cheung. They usually open at 6am to serve passengers on early flights.

Eighteen top international luxury brands have opened stores at Hongqiao airport, a third of them being their first airport outlets. Even after the pandemic, seven cosmetics brands have newly opened, such as Chanel and Jo Malone London.

The Pudong airport has also been attracting popular brands despite the suspension of international flights amid the pandemic. 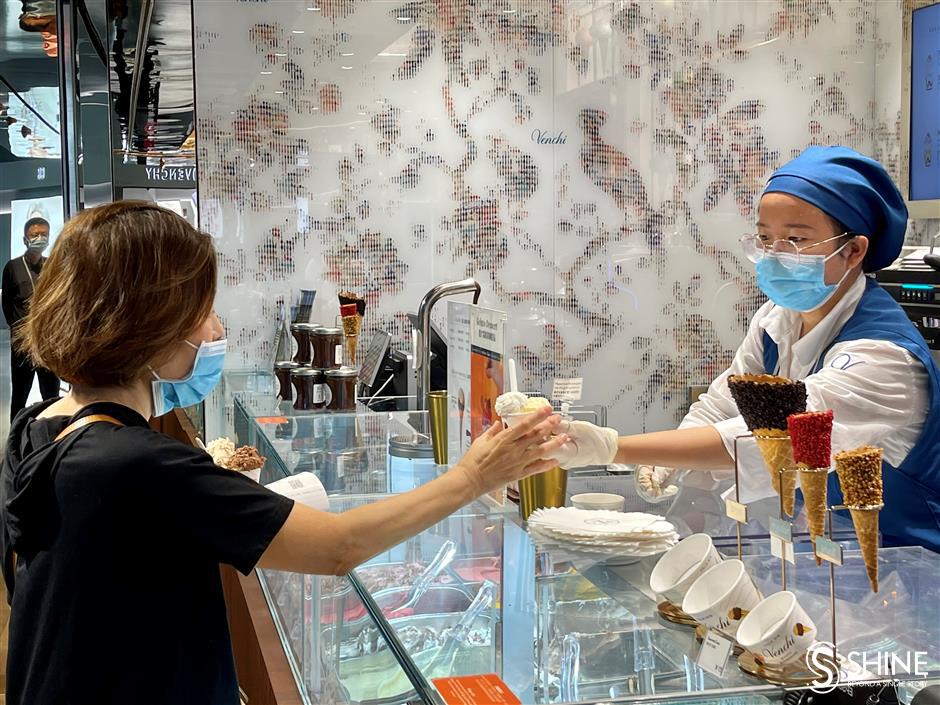 Local coffee brand M Stand opened its first airport outlet at the T1 terminal of Pudong airport on June 30. It has decorated the store in a crystal palace style with light and shadow art installations.

New chain store brand EGO has also opened its first airport store with many time-honored foods of the city. Lawson launched its themed store based on the city's landmark Oriental Pearl Tower and Teddy Bear.

"Over 1,000 transactions have been made at EGO since it opened at the end of June," said Zhang Xiaojin, a retail manager of the chain store brand jointly developed by Bailian and Alibaba.

A WeChat app will be launched soon to allow travelers on tight schedules to order on mobile and pick up the products on site, Zhang said. 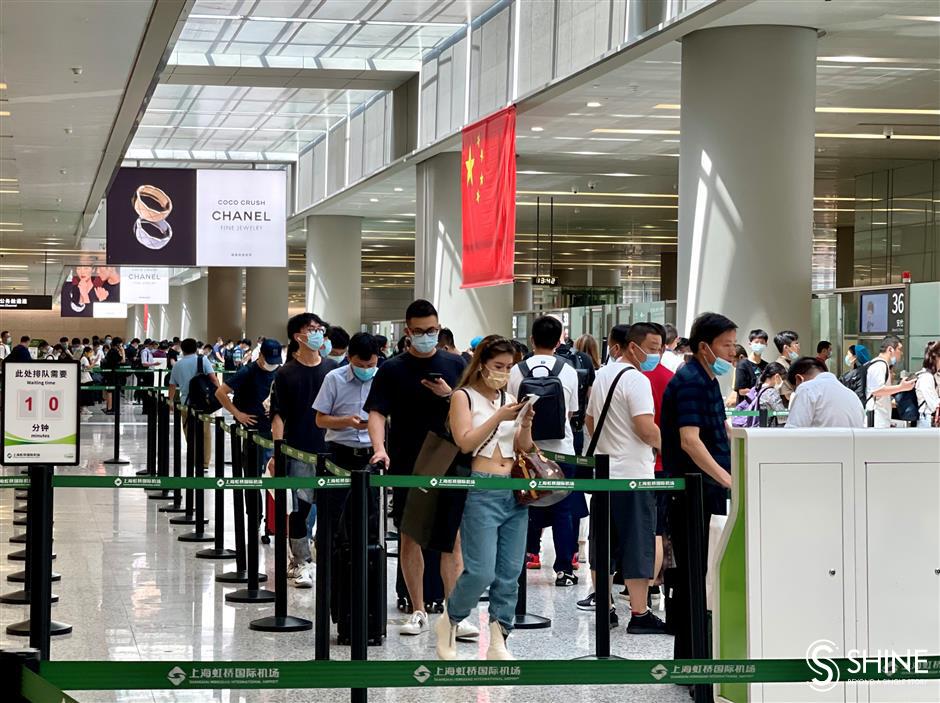 A long line of travelers wait for their security check at Hongqiao Airport's T2 terminal on Thursday afternoon.