Shanghai has more than 3,400 centenarians, and the oldest resident is 114 years old, the city's civil affairs authorities announced on Thursday.

Xu Suzhen, who lives in Ruijin No. 2 Road Subdistrict in Huangpu District, has been crowned the city's "oldest" resident for four consecutive years. 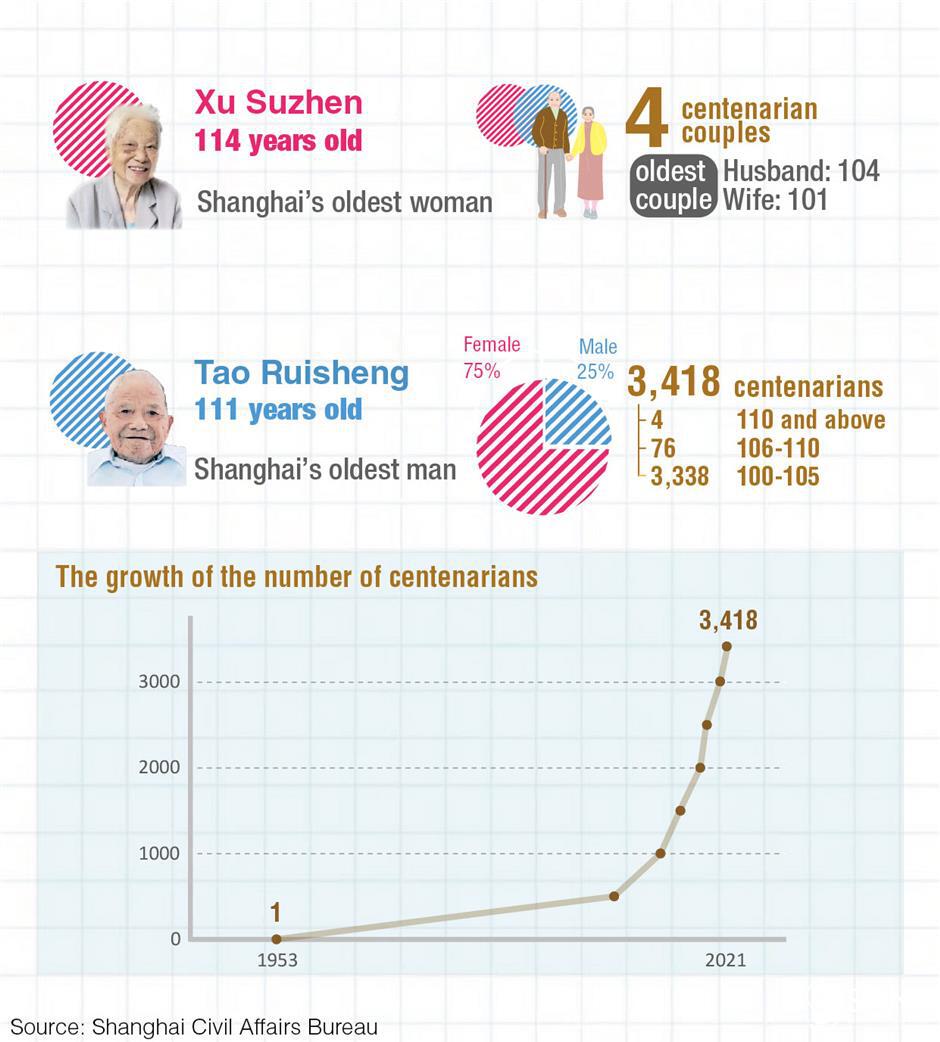 Two men aged 110 years are the oldest males in the city, living in Datuan Town in the Pudong New Area and Hongqiao Town in Minhang District.

In total, 20 centenarians were honored as "Longevity Stars" by Shanghai Civil Affairs Bureau.

The city's oldest citizen Xu has two sons and a daughter. She is a vegetarian and loves playing cards, her daughter Chu Junli said.

"My mother is optimistic, even tempered, kind and prefers to keep a low profile," said Chu. "She is very thrifty but helps out others when they are in difficulty. She enjoys chatting and taking a stroll when the weather is good."

The city also boasts four centenarian couples. The oldest couple has a combined age of 205 years. The husband is 104 years old, and his wife 101. They live in Sanlin Town of the Pudong New Area.

The city also had 2,340 people aged 99, the centenarians-to-be, by the end of September.

Between 2000 and 2020, the average annual growth rate of centenarians reached 12.2 percent in the city, the bureau said.

The annual growth rate of male centenarians in the city hit 15.82 percent on average over the past 20 years, higher than the 11.4 percent of females, according to the bureau.

Dai Xiaomei, 101, said a regular schedule is the key to her longevity.

"I get up at 5am and the first thing is opening the window for a deep breath of fresh air," she said. "I have a good diet and have milk and porridge for breakfast."

"Happiness is most important," she said.

"I like reading newspapers and writing articles," said Wang Ruzhuang, 108. "I even surf the Internet. I am satisfied about my life."