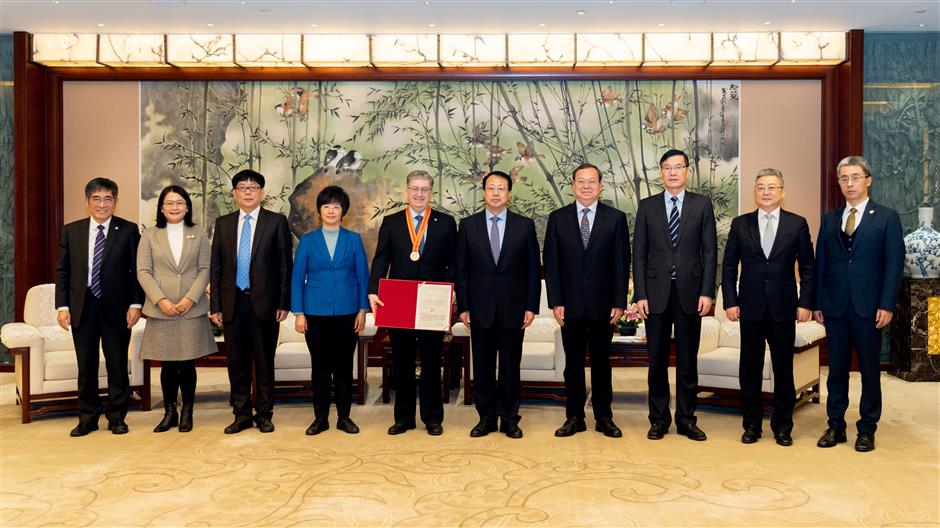 Shanghai Mayor Gong Zheng presented medals and certificates to the 2021 winners of the Shanghai Honorary Citizenship and Magnolia Gold Award on Monday in recognition of their outstanding contributions to the city's socio-economic development.

"I'm deeply moved to be honored in this way by a city that I admire so much for its commitment to build and strengthen bridges that cross national borders," Lehman said after accepting the medal and certificate from Gong.

Meanwhile, 10 expats from the United States, the United Kingdom, Germany, Italy and Japan were honored with the Magnolia Gold Award on Monday.

They come from fields including trade, finance, shipping and service sectors, as well as science and culture areas.

Gong conferred the medals and certificates to seven recipients who attended the awards ceremony. The other three were absent due to personal reasons.

Zong Ming, vice mayor of Shanghai, thanked the winners, on behalf of the city government and local citizens, for their contributions to Shanghai.

She said Shanghai has stepped up its efforts to build itself into a global center for economy, finance, trade, shipping and scientific innovation, as well as an enchanting innovative, humanistic and ecological city with famous brand names in the sectors of service, manufacturing, shopping and culture. 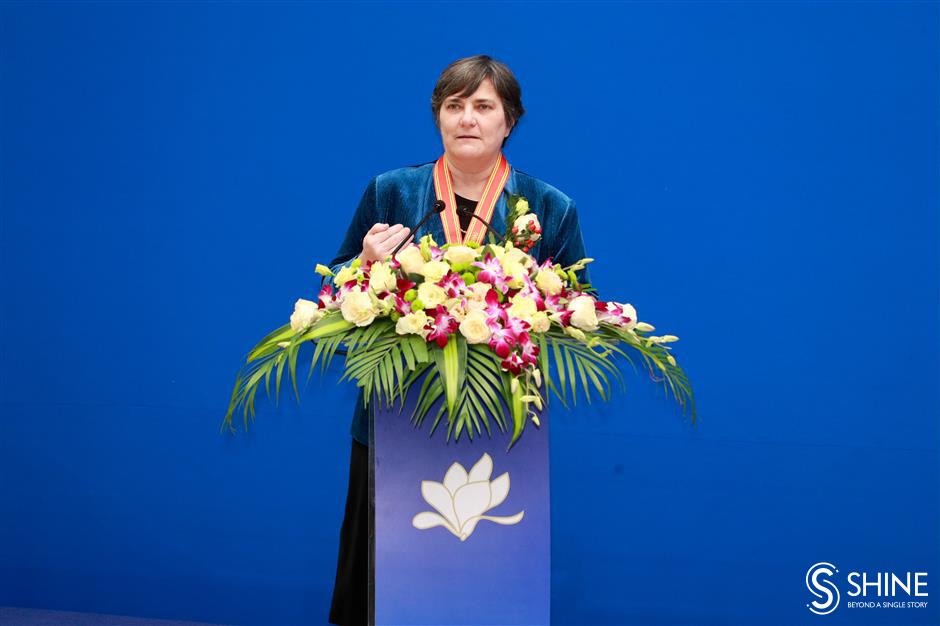 Marie Kieran Waxman, distinguished professor at Fudan University, delivers a speech on behalf of all the Magnolia Gold Award recipients.

Marie Kieran Waxman, distinguished professor at Fudan University, thanked the city government, on behalf of all the recipients, for the honor.

"We all feel like modern Shanghainese," she said. "Shanghai is firmly rooted in each of our hearts. From these hearts have grown blossoms that today you have accepted as Shanghai magnolia blossoms."

She said, together with her husband and grandchild, she has spent over 10 years in Shanghai and witnessed the amazing acceleration of the city's transformation.

"We therefore share the belief of the majority of Shanghai citizens that progress at present is already excellent, but the future will inevitably bring even more progress, more prosperity and still better individuals in societal life," the professor noted.

Waxman said her spiritual goal was to serve all mankind while fully respecting the laws of the land where she lived.

"I have found that I can gain utmost spiritual satisfaction in Shanghai because I am allowed to serve in a highly advanced collective city system which radiates positive impact, not only for China, but increasingly for the rest of the world," she said.

"For the rest, let me say that you can be absolutely certain that to the best of our ability, we will continue to work vigorously, hand in hand with you to further contribute to the success of the city and the happiness of its inhabitants."

Shanghai began honoring expats in 1989 with the Magnolia Silver Award and added the gold ward and honorary citizenship into the system in 1992 and 1997, respectively.

More than 1,600 awards and honorary titles have been given out so far.

Recipients of the Magnolia Gold Award take a group photo with the Mayor Gong Zheng (front center) and other city officials.