A pile engine begins working in the middle of the Nanjing Road Pedestrian Mall on Monday morning for the renovation of Century Plaza.

Bulldozers and pile engines were rumbling across Shanghai on the first workday of the Year of the Tiger on Monday reflecting the Chinese proverb "the whole year's work depends on a good start in spring."

Key construction projects have been launched by multiple local districts to create many new future landmarks of the city, both in downtown and suburbs.

They include a new central plaza at the Nanjing Road Pedestrian Mall and the future tallest skyscraper in Puxi in the Xujiahui commercial hub.

A new round of transformation has also kicked off in the former iron-steel center in the northern outskirts of Baoshan and also in suburban Jiading District. 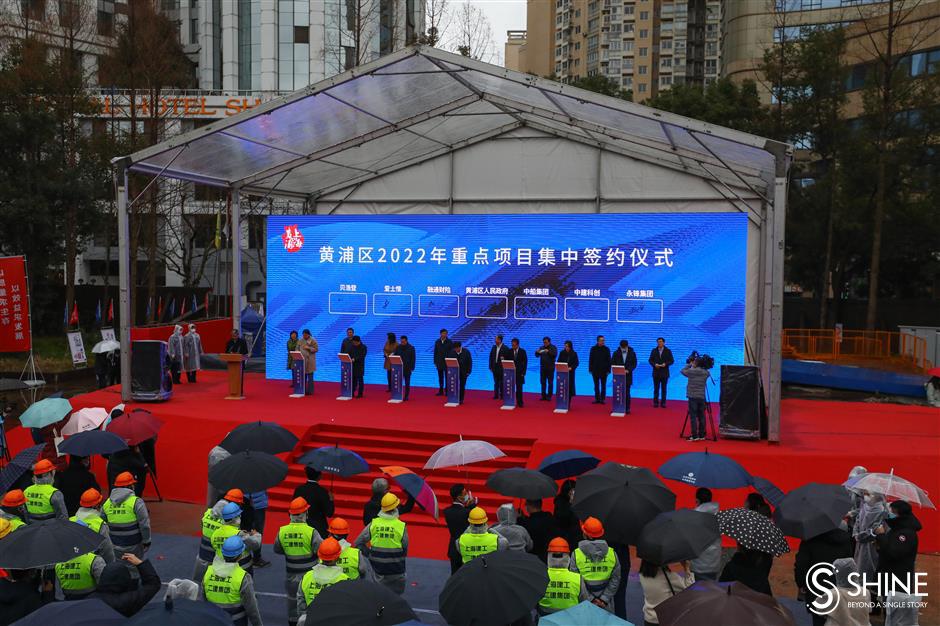 A pile engine broke the pavement in the middle of the Nanjing Road Pedestrian Mall on Monday morning, marking the beginning of the citywide construction boom for the Chinese New Year.

Renovation started on the iconic Century Plaza on Nanjing Road to drive the commercial upgrade of the pedestrian mall, known as China's No. 1 commercial street.

The major facelift is one of the 10 key construction projects, with a total investment of 45.7 billion yuan (US$7.2 billion), that were launched in downtown Huangpu District on Monday.

As the pedestrian street has been extended to the Bund, the plaza near its center requires a new look to keep luring visitors from across the world, according to the district government.

After the 250-million yuan makeover, the plaza will include a main structure known as the "magic kaleidoscope," a greenery sightseeing hill and a shell-like square. At night, the main structure will be illuminated to look like a shining pearl in its shell, according to the design from a Spanish team.

"Leading domestic technological and artist teams have been working together to make the blueprint of the designers come true," Guan Jianwei, an official with Huangpu's key construction project office, revealed.

Upon its completion by the end of 2022, the plaza will have larger space to host a greater variety of events, while offering a leisure spot for tourists and locals. Global brands on the road will be invited to release their new products there, said Guan.

The nearby commercial buildings, which are home to many time-honored brands such as Lao Da Fang bakery and Chow Tai Fook jewelry, will undergo major renovations to match the new look of the plaza, he added.

The pedestrian mall receives some 200 million tourists annually with total sales exceeding 10 billion yuan, making it one of the most lucrative commercial hubs in the city. More than 20 international and time-honored local brands operate on the street.

The plaza was initially built for the grand opening of the pedestrian street in 1999. It later became one of the city's most popular sites for New Year countdowns as well as other cultural events. 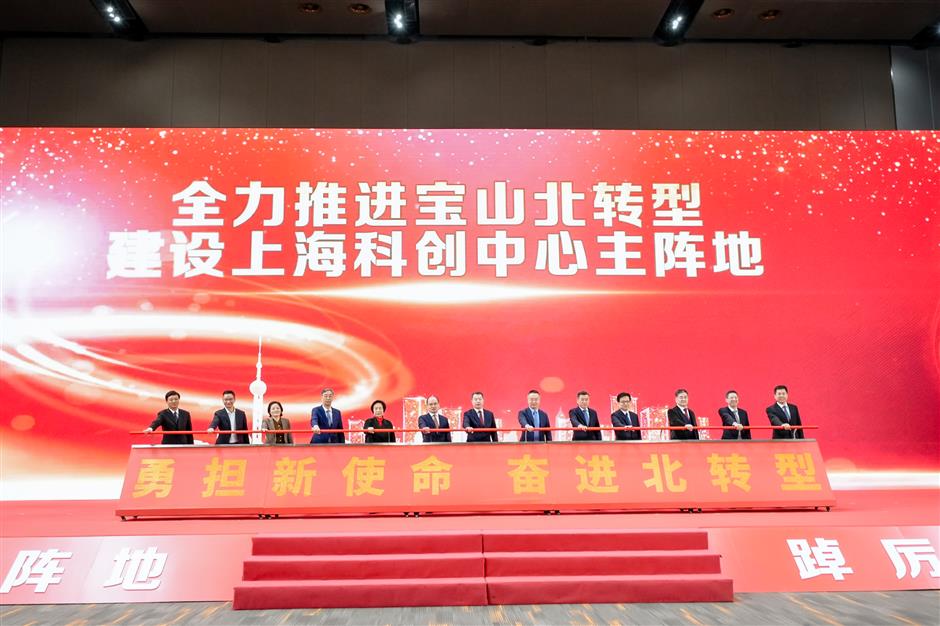 Chen Jie, Party secretary of Baoshan, and other district officials mark the beginning of a batch of new projects for the transformation of the northern iron steel production center.

Shanghai's northeast industrial bases in suburban Baoshan District will become a pilot zone for intelligent applications and the digital transformation of old industries.

The Nanda and Wusong areas, once the city's iron-steel bases, are being developed into Nanda Future Smart City and Wusong Innovation City.

To cap the demand of the massive industrial transformation, the district government signed agreements on 42 key projects on Monday with a total investment of 21.8 billion yuan.

It also released an upgraded version of services and measures to further optimize the district's business environment and attract investments in 2022.

Around 700 "cherry blossom cards," or talent cards that offer preferential services, for instance, have been issued to its top professionals. Some 1,141 professionals were attracted to work in Baoshan last year.

As an example, the district government departments will offer tailored and timely services to scientists, who are dedicated to work and have no time to take care of their families, according to the government. Registration, financial, training and counseling services will be offered mainly to outstanding entrepreneurs.

The district government has also largely shortened the approval process for key projects.

A gigafactory for COVID-19 vaccines, for instance, started production within a year after the project was approved. The factory, jointly developed by Shanghai Pharmaceuticals and STAR-listed CanSino Bio, can produce 200 million shots of the coronavirus vaccines annually. 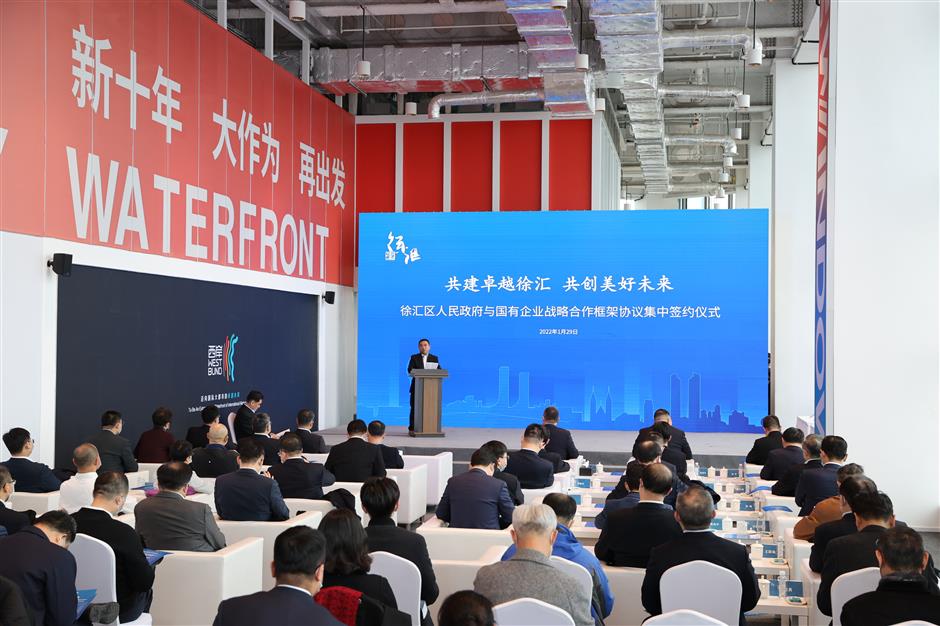 A signing ceremony is held at Shanghai AI Tower for a new round of cooperation between Xuhui District and 14 state-owned enterprises.

Construction is in full swing on the Xujiahui Center project, which includes the 370-meter T2 tower on Hongqiao Road – the tallest structure in Puxi.

One of the towers of the project will be completed early this year and become one of the largest commercial complexes in downtown Shanghai.

When completed in 2024, the 70-story T2 tower will be the fifth tallest in the city after the 632-meter Shanghai Tower, 492-meter Shanghai World Financial Center, 468-meter Oriental Pearl TV Tower and 420.5-meter Jin Mao Tower in Pudong's Lujiazui area.

A large swathe of new projects on the West Bund waterfront along the Huangpu River have also been launched in the Year of the Tiger.

To drive the development of the downtown district, Xuhui signed cooperative agreements with 14 state-owned enterprises at Shanghai AI Tower on the West Bund.

Beiyang AI Town, for example, covering 543,000 square meters along the Dianpu River and the city's Outer Ring Road, will become the city's first AI town where artificial intelligence and big data technologies will be implemented in urban information and public infrastructure as well as public service facilities.

In Jiading, deals on 95 key industrial projects with a total investment of 23 billion yuan (US$3.6 billion) were signed at an event held by the district government.

Li Feng, chairman of Shanghai Sermatec Energy Technology Co, a company based in a Jiading industrial zone that specializes in energy storage technology and solutions, signed up to invest about 500 million yuan in the district.

"With this investment, we will have 30,000 square meters of new plants, a 10,000-square-meter laboratory and a headquarters building for our further development," he said. "We have faith in Jiading, which has a strategic geographical location and offers great support for investors."