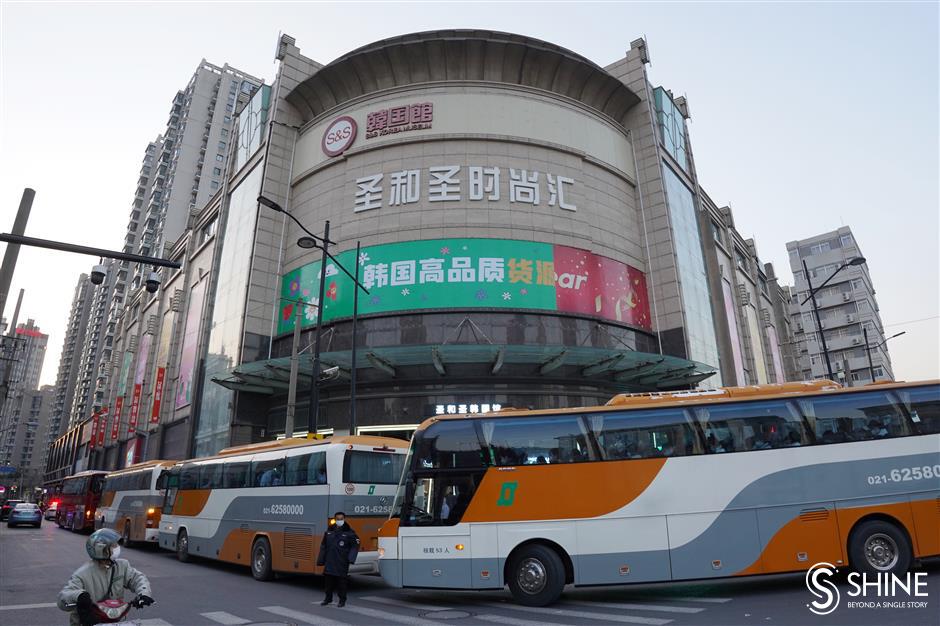 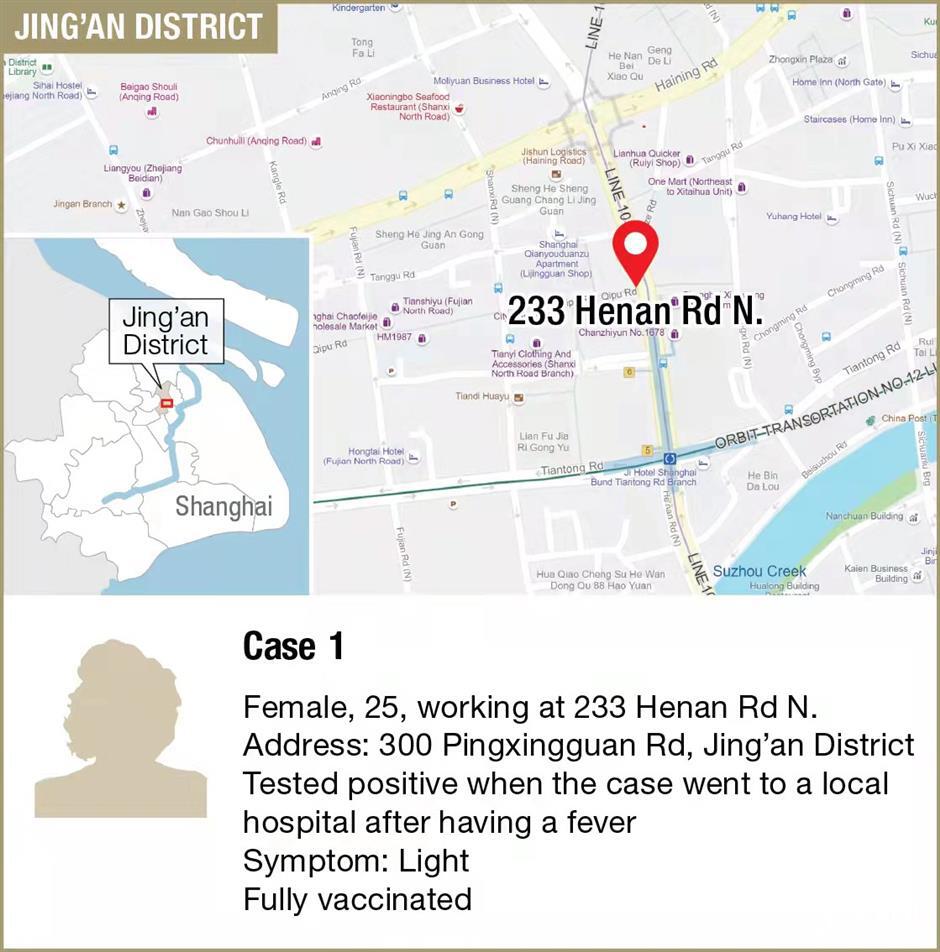 Apart from a 25-year-old female who went to hospital after showing symptoms, all the other cases tested positive after being centrally quarantined as close contacts of previous cases, Wu Jinglei, head of the Shanghai Health Commission, said at a press briefing. All of them have had at least one shot of the COVID-19 vaccine.

233 Henan Road N. of Beizhan Subdistrict in downtown Jing'an District, where the female case works, has been elevated to a medium-risk area.

The new cases, four females and 14 males aged between 17 and 63 years old, have been sent to the Shanghai Public Health Clinical Center for treatment or quarantined medical observation, said Wu. They are residents of Jing'an, Jiading, Minhang, Xuhui, Changning, Putuo and Qingpu districts, and all are in stable condition.

One of the local cases and a dozen of the asymptomatic cases are related to cases reported at the central quarantine site in Xuhui on Sunday.

Places they recently visited, including 233 Henan Road N. and 300 Pingxingguan Road in Jing'an as well as 133 Qipu Road in Hongkou District, have been thoroughly disinfected and placed under quarantine.

The new medium-risk area on 233 Henan Road N. is a commercial/office building mainly for clothing wholesale, according to Zhang Jun, deputy director of Jing'an District.

All the personnel within the building have been put under quarantine for nucleic acid testing, Zhang revealed. 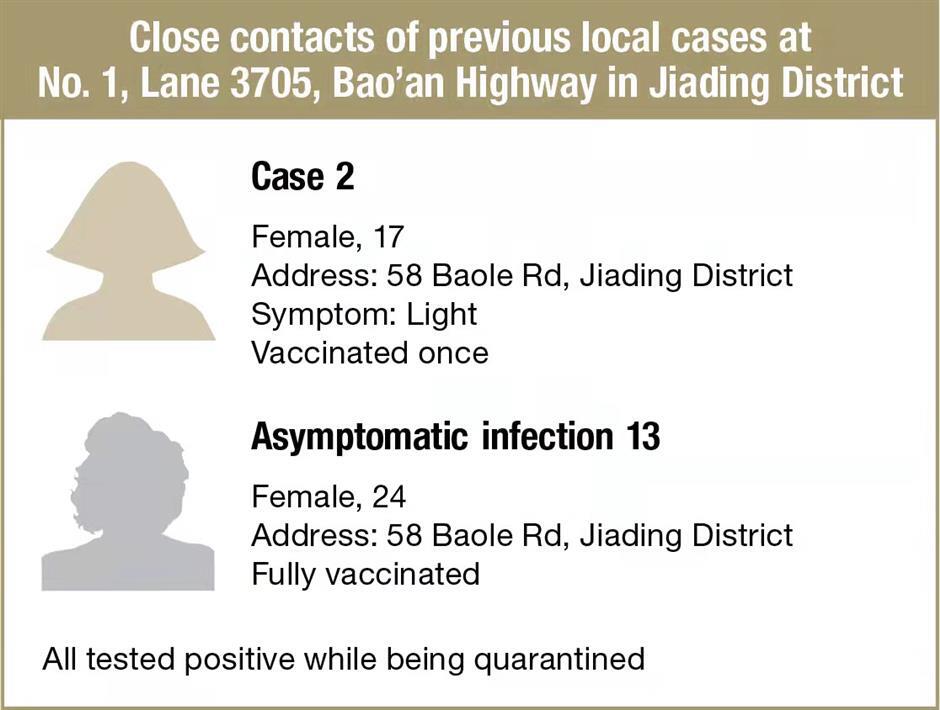 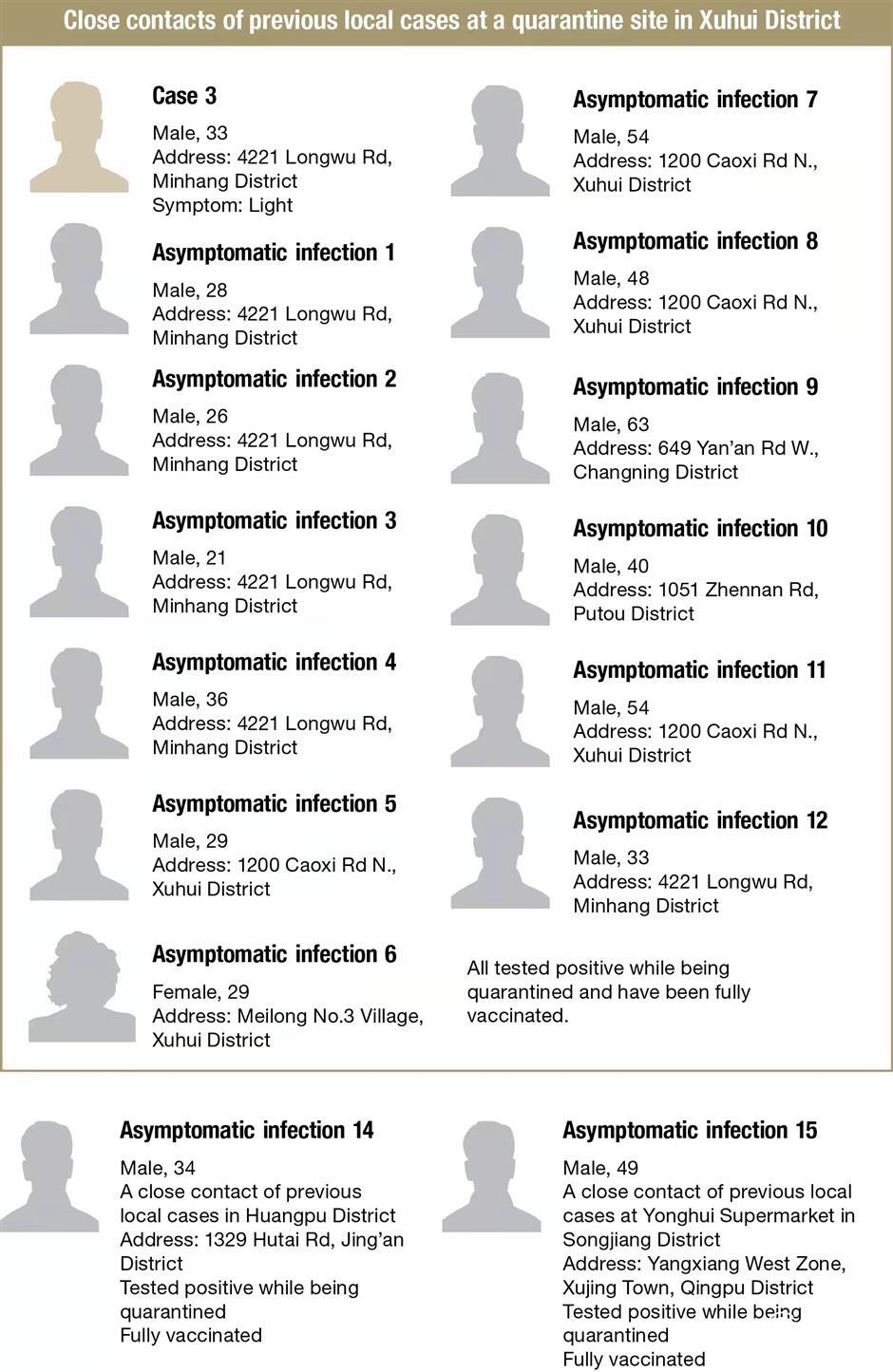 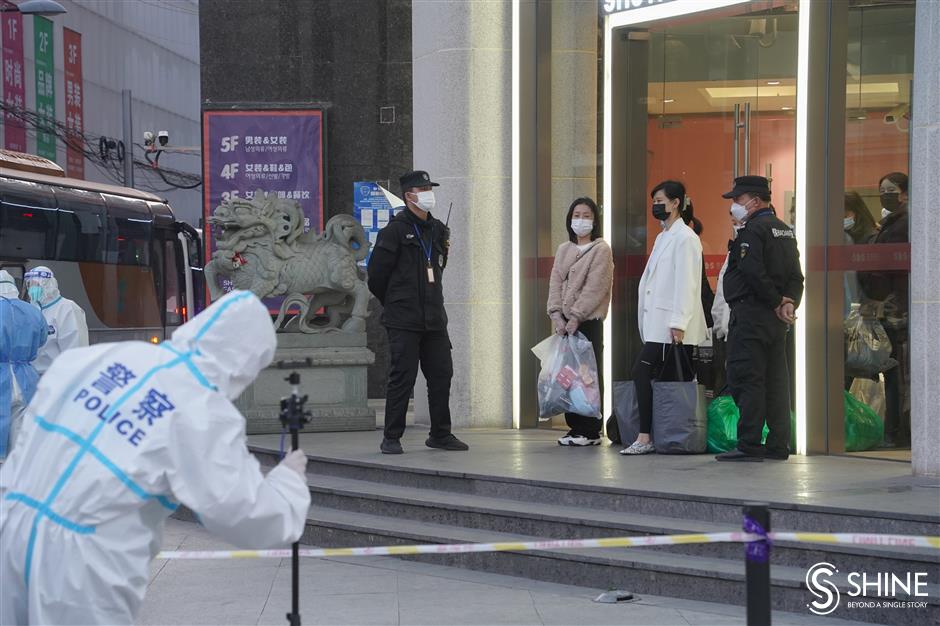 Related people at 233 Henan Road N., the city's new medium-risk area, ready to board a bus to their quarantine site.

Since the beginning of the new round of COVID-19 resurgence in Shanghai on March 1, the city had screened a total of 2,449 people who had close links with the positive cases as of 4pm on Tuesday. Among them, 2,360 have tested negative and the rest are undergoing examination.

Wu promised to further optimize the COVID-19 prevention and treatment measures to ensure residents' normal life is unaffected during the pandemic.

A "closed-loop" transfer service, for instance, will be provided for pregnant women and people with chronic diseases who are under quarantine, Wu said. Designated hospitals in each district will receive pregnant women in emergency conditions for inspection or delivery during the quarantine period.

Medical resources will also be allocated to provide regular treatment, such as hemodialysis and chemoradiotherapy, for those in need under quarantine, he added.

Online class will be given to local students under quarantine, according to Shanghaifabu, the city's official social media account. It refuted an online rumor that local schools will suspend class for four weeks.

Amid rising number of coronavirus cases, more local hospitals and venues have temporarily shut down their operations.

Shanghai Changhai Hospital suspended its emergency, fever clinic and pediatric services at 168 Changhai Road in Yangpu District from Tuesday for COVID-19 screening. Other services at the hospital continue to operate, including outpatients, inpatients, inspection, nucleic acid testing and internet hospital. 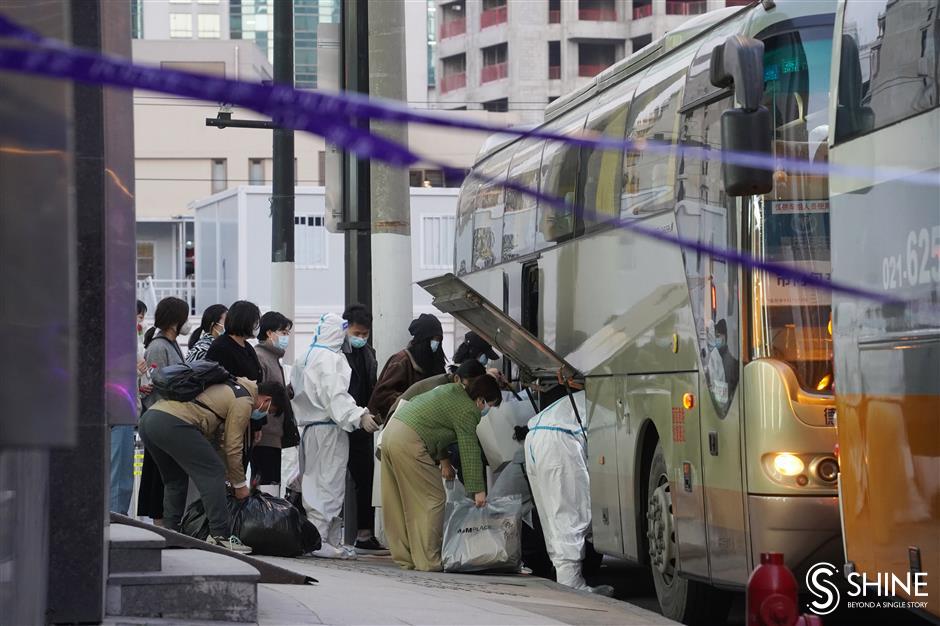 Meanwhile, popular tourism spots in Shanghai, including the Jade Buddha Temple in Putuo as well as the City God Temple and Baiyun Taoist Temple in Huangpu District announced a shutdown from Tuesday to prevent the spread of COVID-19.

Eighteen city parks have been closed since 1pm on Tuesday due to the pandemic, Shanghai's greenery authorities announced on Tuesday night.

Their reopening time is yet to be announced and will depend on how the pandemic situation evolves, the bureau stated. 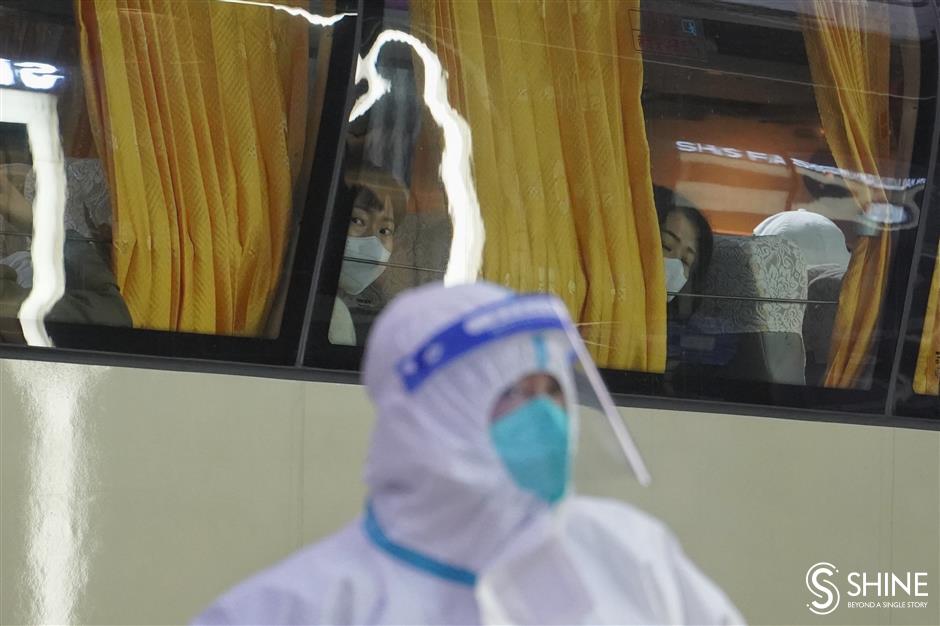 In addition, many local residential communities have been put under quarantine for COVID-19 screening.

Ventilation and disinfection measures have been further enhanced on local subways, buses and stations amid the epidemic, according to Wang Xiaojie, deputy director of the Shanghai Transport Commission.

Public transport bus staff, for instance, are required to switch off air-conditioning in the bus and open the windows if the weather allows, Wang said. Subway train carriages will be fully disinfected, especially the handrails, pillars and doors, before operation.

Local taxi drivers will receive temperature checks before serving passengers and must wear a mask. They can reject passengers who refuse to properly wear a mask, Wang revealed. Every cab will be disinfected at the end of the day's operation.