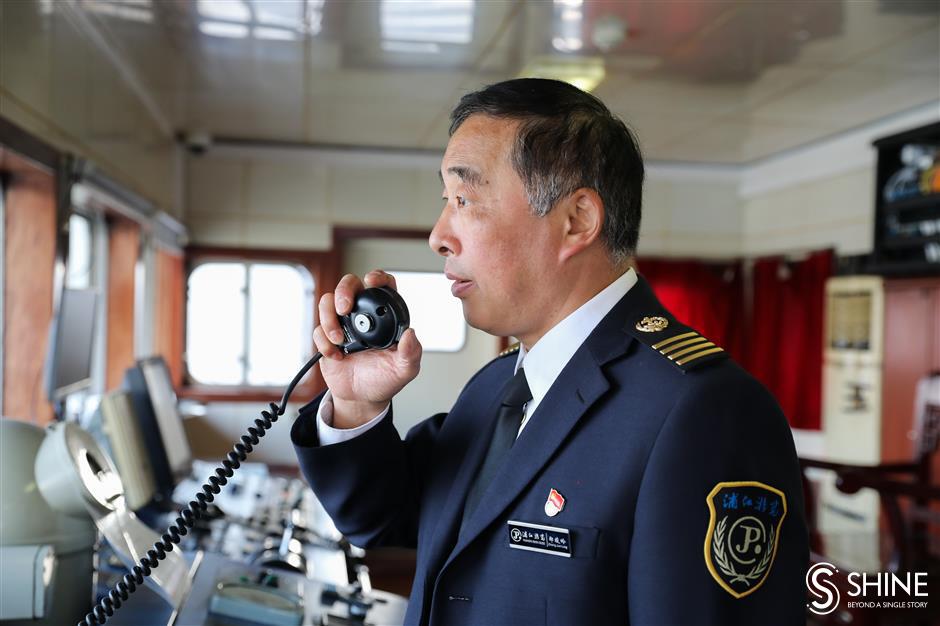 Captain Zheng Junling makes the order to board. 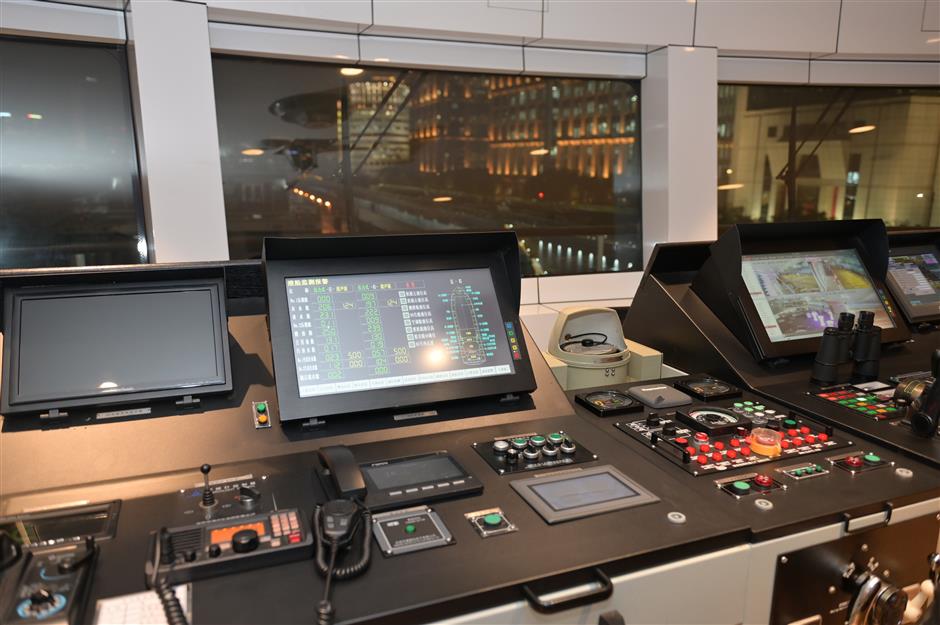 The steering room of a Huangpu River cruise ship. 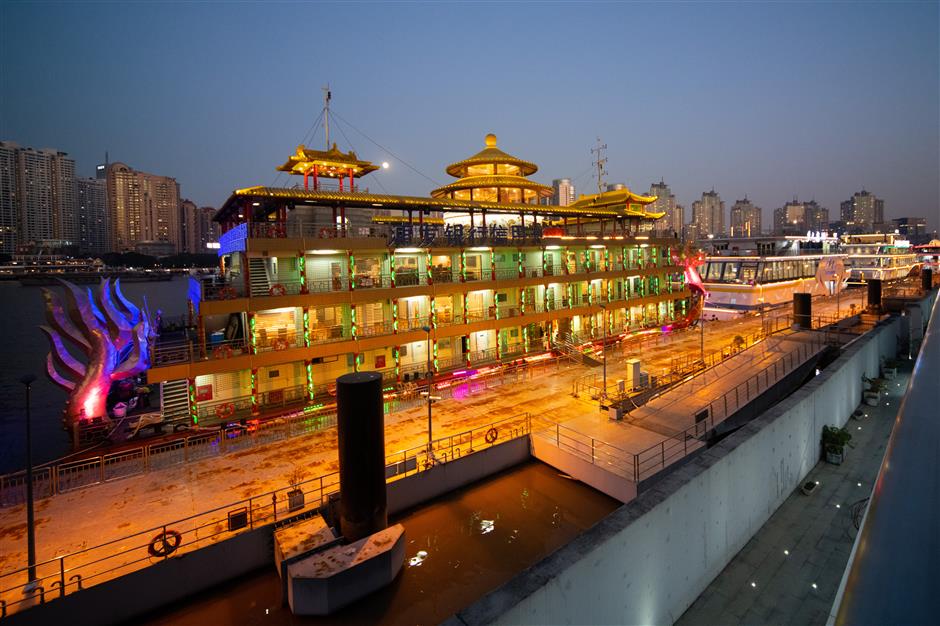 The cruise ship that Zheng captains.

Captain Zheng Junling's bond with sea and vessel started more than 50 years ago when he was a little boy. The image of a captain using a telescope while standing on the deck left a deep impression on him.

He also eventually became a captain and has been working on vessels sailing the Huangpu River for 40 years. Zheng, aged 60, is the oldest of all the sightseeing ship captains on the river still manning his post.

He is the captain of No. 1 Huangpu River Cruise Ship, a sightseeing cruise liner known as "Dragon Ship" for its dragon shape and traditional Chinese-style decoration. Zheng has been in charge of the same ship since 2007.

It is the most iconic and luxurious sightseeing cruise tour vessel on the river.

Its two-hour voyage takes in spectacular views along the Huangpu River at night and passes landmarks such as Nanpu Bridge, Binjiang Avenue, Shanghai Oriental Pearl TV Tower, Waibaidu Bridge and the Bund.

Zheng has been a witness to the significant changes along both banks of the river.

"When I started steering ships on the river in 1996, I could only see dim lights on the Bund and in the Lujiazui area. It was dark when we sailed to Gongping Road and Expo Park," he said.

"Now, with the 45-kilometer waterfront of Huangpu River opening to the public, the lights along the river are dazzling and beautiful. Great changes have been seen." 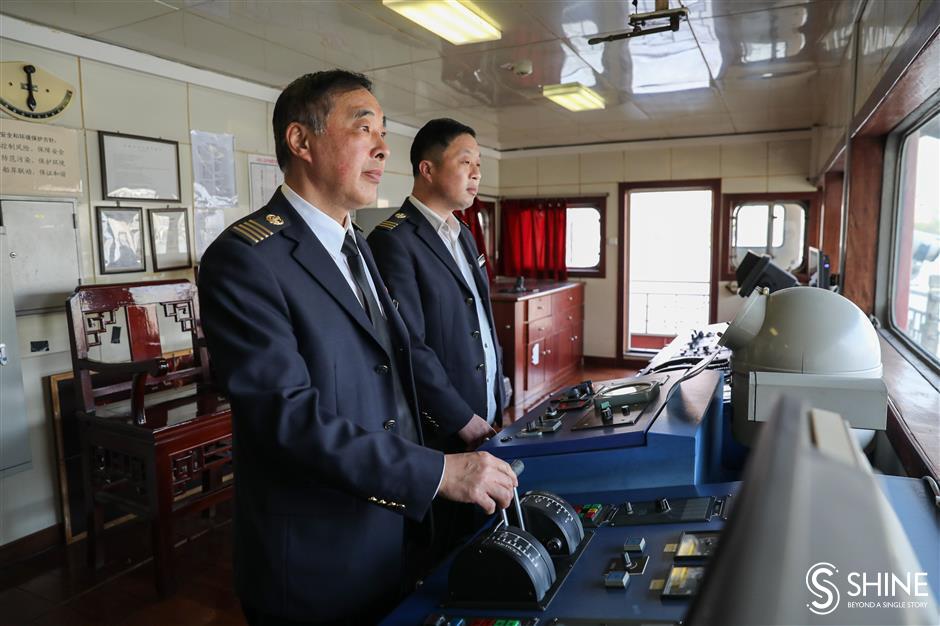 Zheng (left) takes charge on the bridge of No. 1 Huangpu River Cruise Ship. 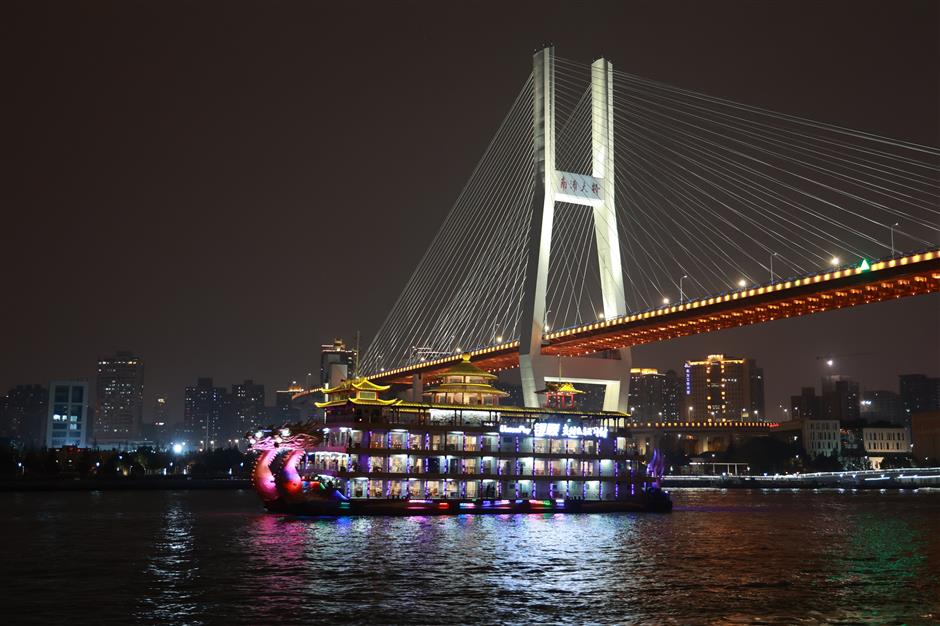 The ship Zheng steers passes under an iconic road bridge. 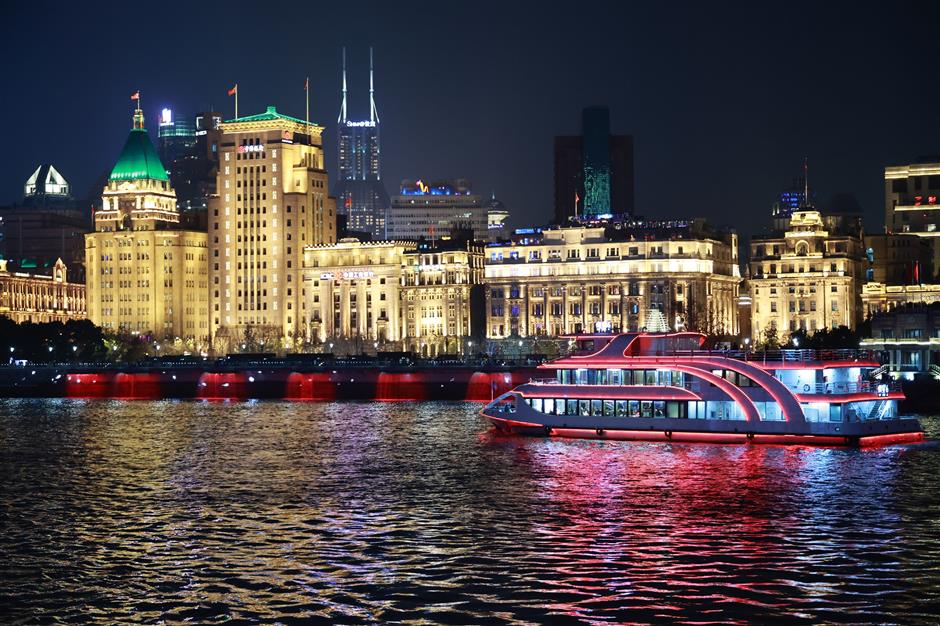 In China, a captain is often called "old captain," a term of praise for their reliability, experience and moral standards.

He deftly manipulates all the vessel's navigation instruments and knows the meanings of all the different flag signals hung on ships.

"I am on 100 percent concentration when I am on board," he said. "I am responsible for the safety of all passengers and crew on the ship."

Zheng's father was the chief engineer of passenger liners on Chongming Island.

"In the 1970s, passenger liners serving the island were very busy," said Zheng.

"I liked following my father on board ships during my childhood, and the captain looked cool when he watched through the telescope," he said. "I still remember the scene even today."

A captain's life is by no means an easy life.

He learnt inland navigation at college and started steering ships in Wusong area after graduation, following in the footstep of his father.

"In the beginning, I had the job of steering and then I became third, second and chief mate after much training," said Zheng. "Step by step, I became a captain."

It usually takes at least 10 years for a crew member to obtain the certificate of captain, and longer, based on evaluation results, for the person to be appointed as a captain.

Zheng started working in 1982 and obtained his captain's certificate in 2006. 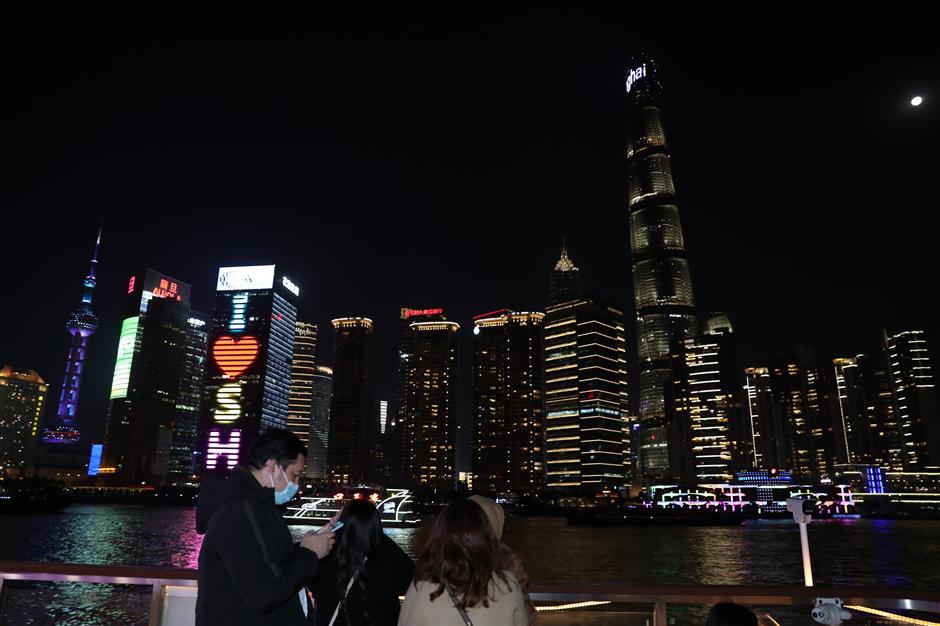 Passengers enjoy the scenes of a night cruise. 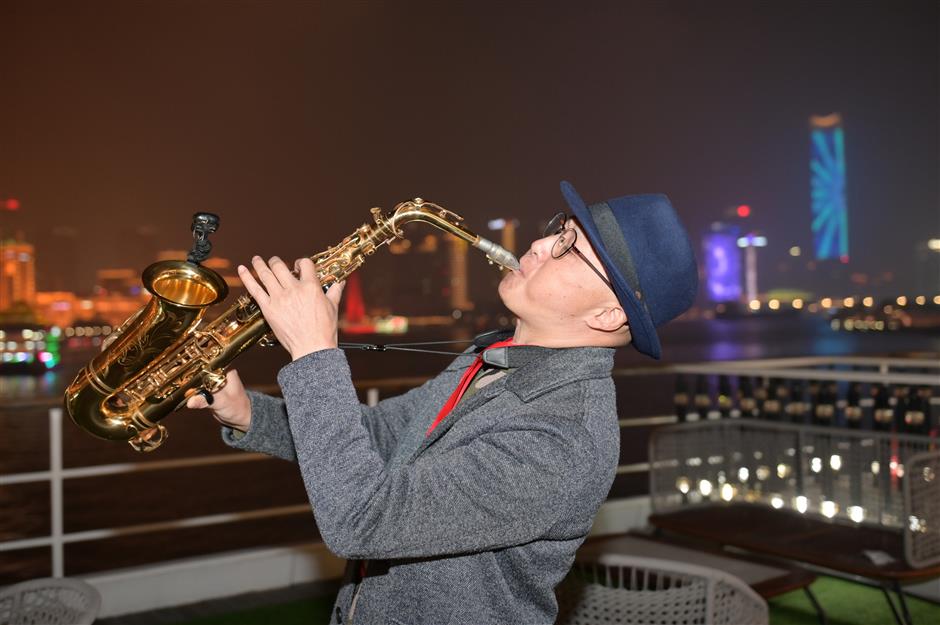 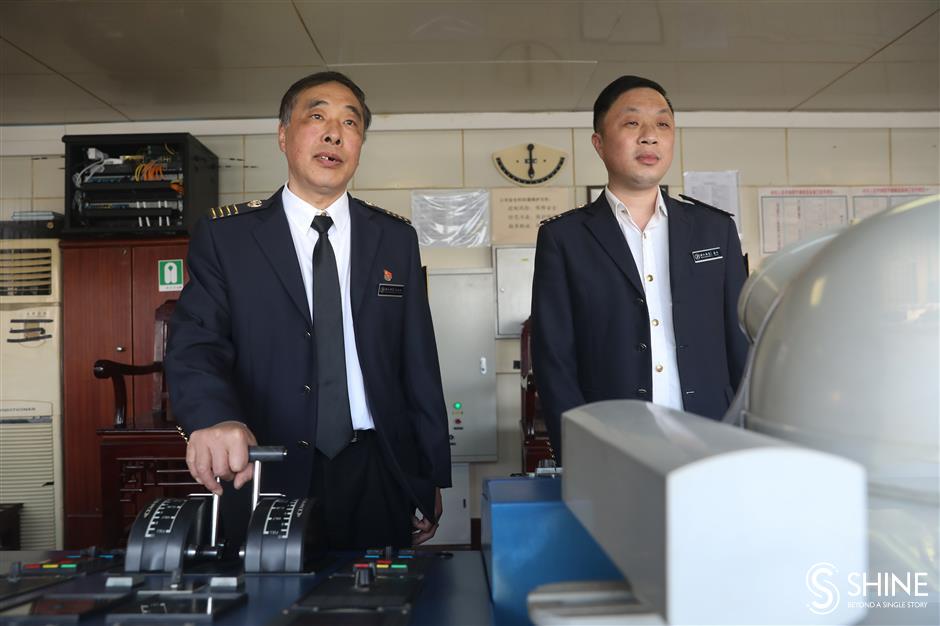 "There are four straps on the epaulet of a captain's uniform, and each have different meanings that represent the credentials to be a captain," said Gong Hongliang, vice chairman of the labor union of Shanghai Huangpu River Cruise Co for whom Zheng works.

"The first represents knowledge, which involves a wide range of areas from ship steering and international standards and rules to the meaning of flags and telegram terms," he said. "The exams are very difficult to pass."

"As a captain, you also need to know navigation equipment well and have good command of maritime meteorology, hydrological knowledge, astronomy and geography," Gong added. "Thus in most cases, the image of the 'old captain' in people's minds has a beard, making him look knowledgeable.

"The second epaulet strap represents experience. A captain should be capable of accurately judging the direction of ships as well as tide and wind direction and have experience in sailing, management, communication with passengers and handling emergencies," Gong said.

"The third is responsibility because he will bear all responsibility if there is anything wrong with the ship. The final epaulet is for moral integrity.

"The training of a captain takes 10 years and the subsequent appointment involves evaluation procedures. It is even more difficult to obtain a captain's certificate than a pilot's," Gong added. 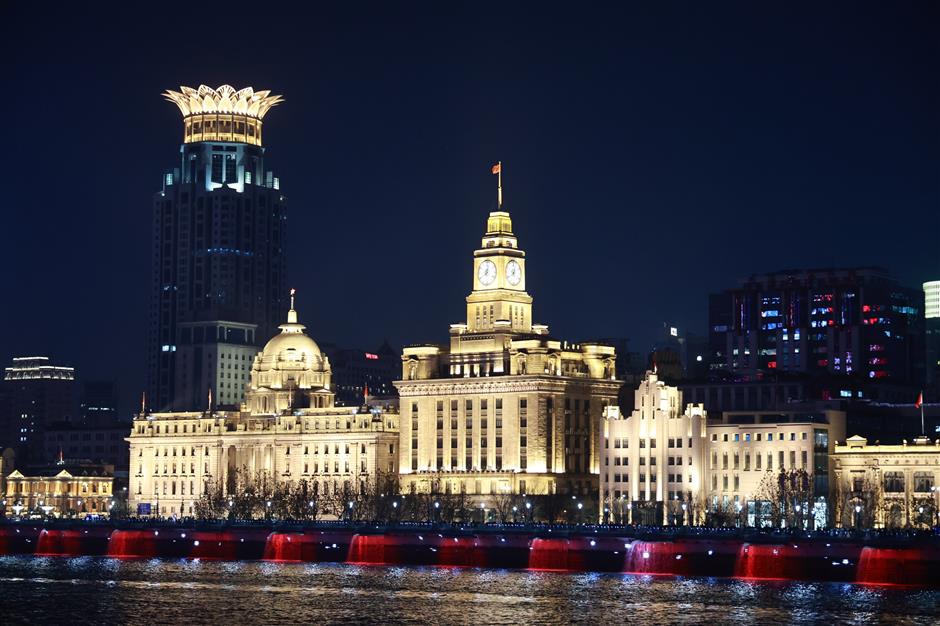 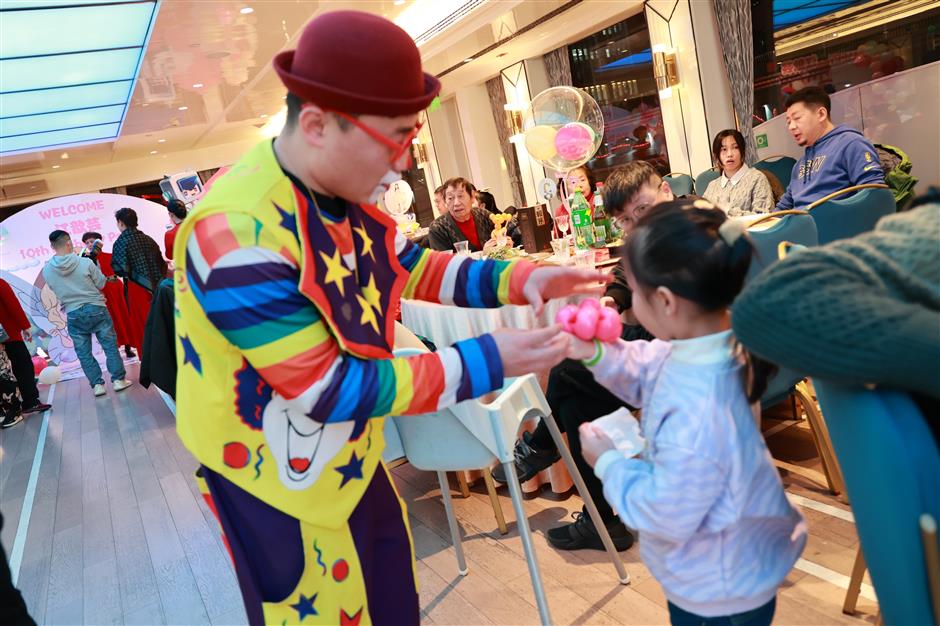 A performer interacts with a child during a cruise. 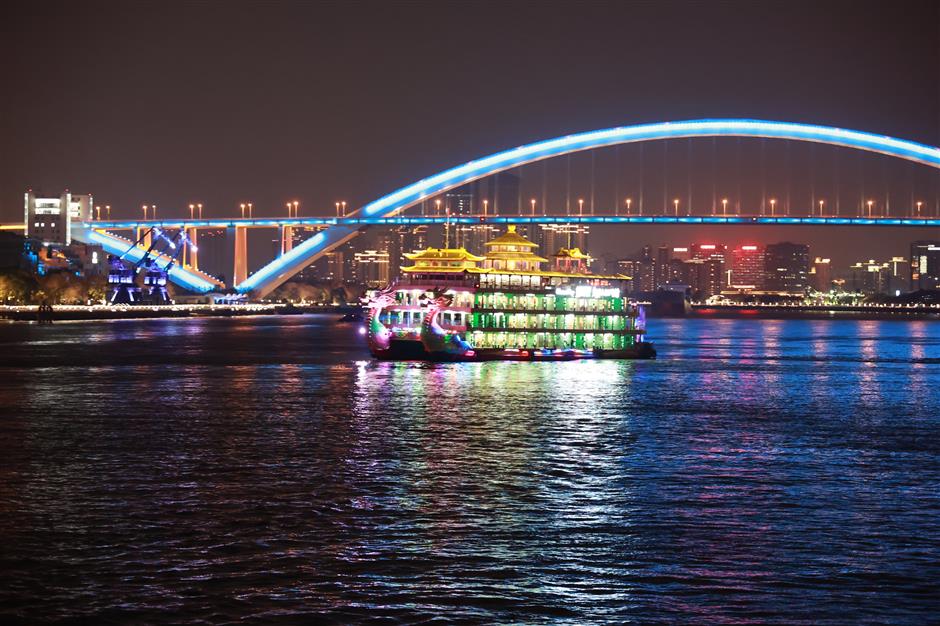 The ship that Zheng steers sails on the Huangpu River.

Zheng has proved to be a qualified captain through his service duration, said Gong.

"Steering ships is not like driving a car as you can't always put on the brakes and it will be affected by wind and tide," Zheng said.

Emergencies happen from time to time, and strong convection forces are one of the worst.

"Sudden thunderstorms and gales will force the ship back to dock, which often happens," said Zheng. "On windy days, steering ships is dangerous ... they are demanding for the operation of ships."

Once, a passenger on the ship suddenly became unconscious as the vessel moved towards Lupu Bridge, testing Zheng's capability to handle an emergency.

He immediately contacted maritime authorities and ambulance hotline 120, calmly steered the ship back to the dock with the help of a patrol boat and moved the passenger off safely.

Sometimes, strong convection forces and typhoon weather will cause a cruise to be cancelled.

"Compared with the past, GPS technology has made voyages safer," said Zheng.

The sailing speed and distance of other ships moving along Huangpu River are shown on a screen.

Ships cannot make random turns as there are specific areas for them to do so and flags need to be displayed.

Zheng could not tell how many passengers he has served because there have been too many. He even steered the pilot ship during the fireworks show for APEC.

He is teaching his successors now, and new crews, as he is at retirement age. 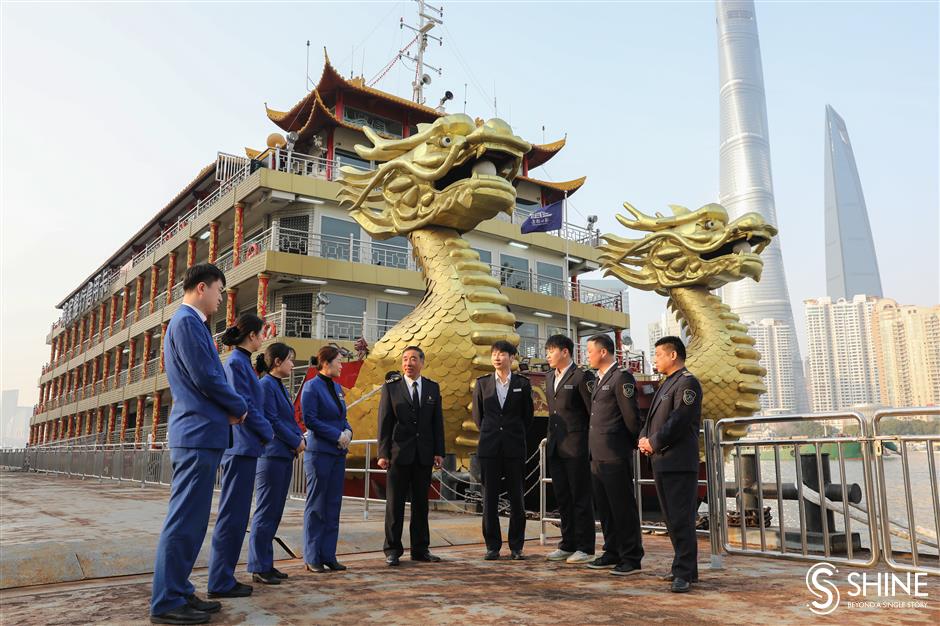 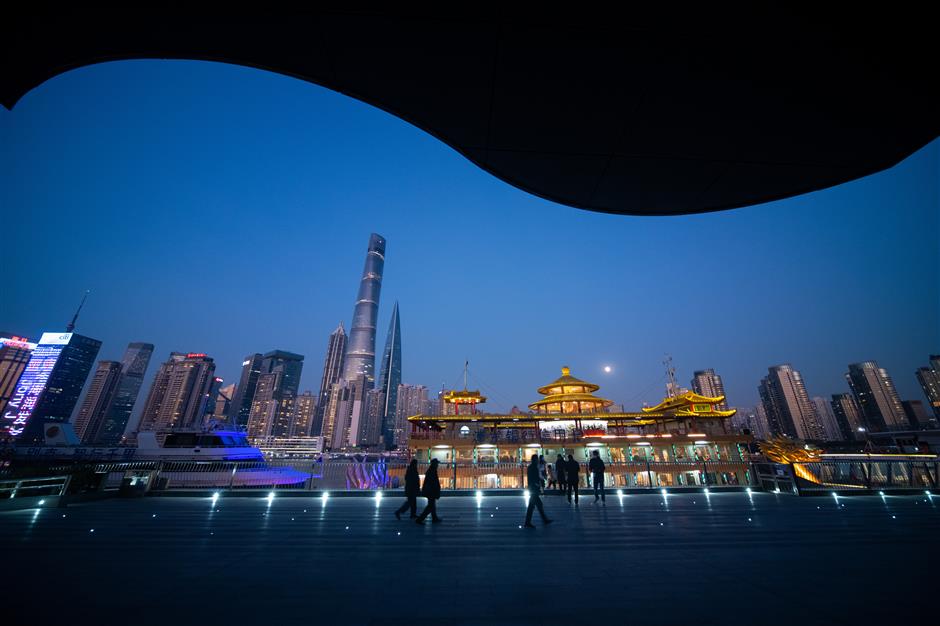 The ship that Zheng steers docks in Huangpu District. 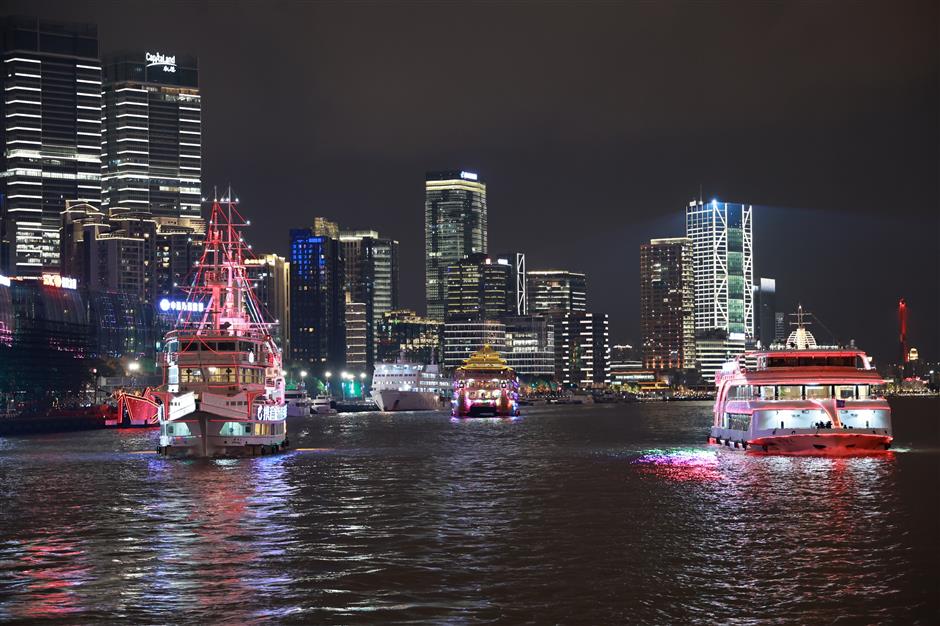 Continuing efforts are being made to develop the iconic Huangpu River cruise tour into a world-class attraction.

The origins of the tour date back to July 1931, when Chinese literati and guests of hotels took boats sightseeing on the river.

"Water transportation was busy due to the booming development of Shanghai port, and many hotels had their own boats at that time," said Gong.

"Most of the boats used were small wooden ones," he added.

"Also, foreigners introduced many water sports activities, such as canoeing, when they came to Shanghai and boats were rented for people to host weddings," said Gong.

Shanghai's Huangpu River cruise tour gradually became an important tourism feature of the city and a must-visit for visitors from out-of-town during the heydays of the 1990s with development of the Pudong New Area, the Nanpu and Yangpu bridges and the Oriental Pearl TV Tower.

"Tourists appreciated seeing the landscapes along the river on ships and the tours offered a window into the city's changes," said Gong.

Now, this "window of Shanghai" has become an indispensable name card representing the city, although the COVID-19 pandemic has posed a severe challenge to the tourism sector with plunges in visitor numbers. 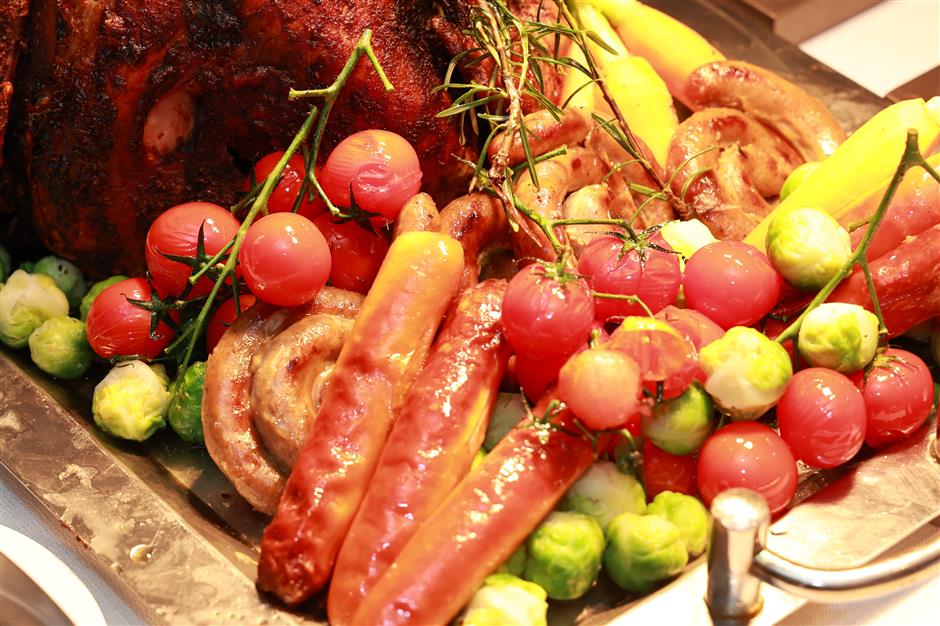 Delicacies offered during a river cruise. 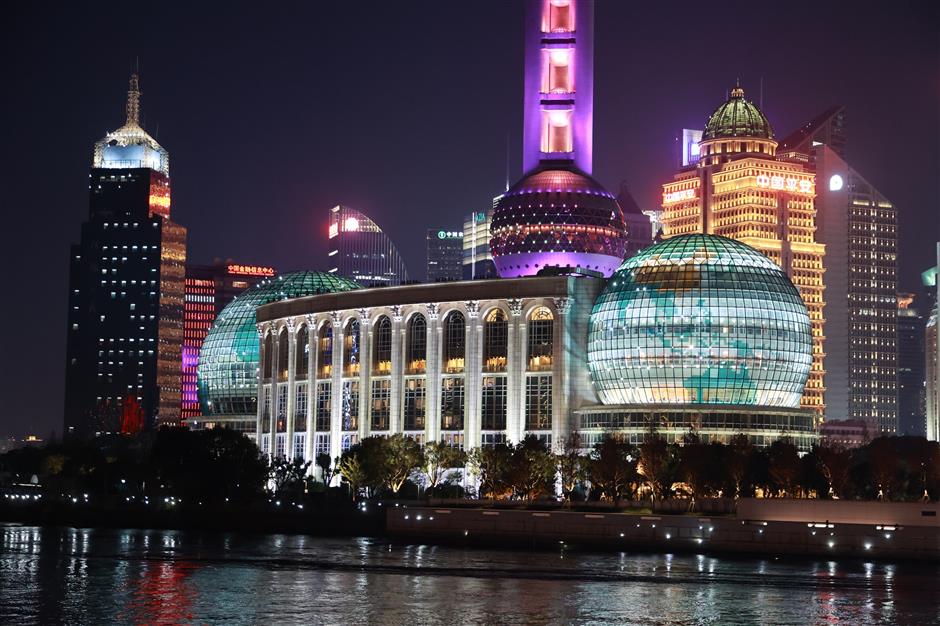 An enchanting night view of the Bund as seen from the ship. 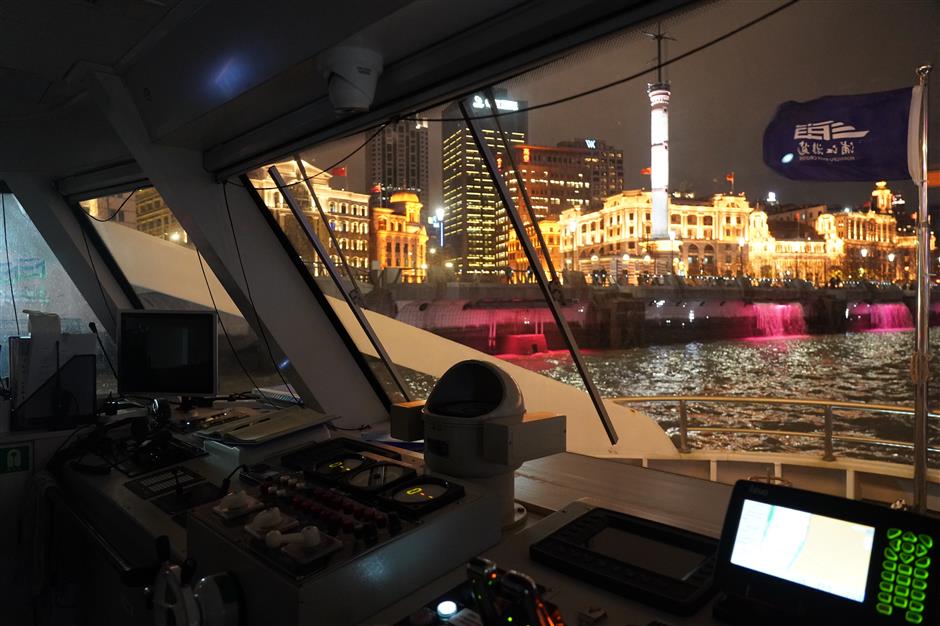 "With the opening of the 45-kilometer Huangpu River waterfront and urban development, we are diversifying our product portfolio and linking attractions along the river with the cruise, turning it into a hop-on, hop-off tour with longer touring hours," said Gong.

"They will take passengers to explore the splendor of architecture along both banks of the Huangpu River, get to appreciate the charm of art at TeamLab Borderless Shanghai, an art tourism landmark on the waterfront, experience thrilling eSports games onboard and enjoy downtime with friends at an afternoon tea party."

"As one of the most classic and landmark attractions for tourists to Shanghai and a must-experience for visitors from home and abroad, a Huangpu River cruise trip is increasing its allure to Shanghai residents and creating a 'floating living room,'" said Wang.

The history of Huangpu River cruise tours indicates that the majority of passengers are out-of-town or foreign tourists, but the situation is changing due to COVID-19.

"We are exploring the local market, and now about 70 or 80 percent of passengers are Shanghainese," said Gong.

"Some enjoy the tour with their children and relatives in the emerging staycation trend," he added.

A variety of food-themed activities and others targeting parent-child families have been held on board to offset the negative impacts of COVID-19. 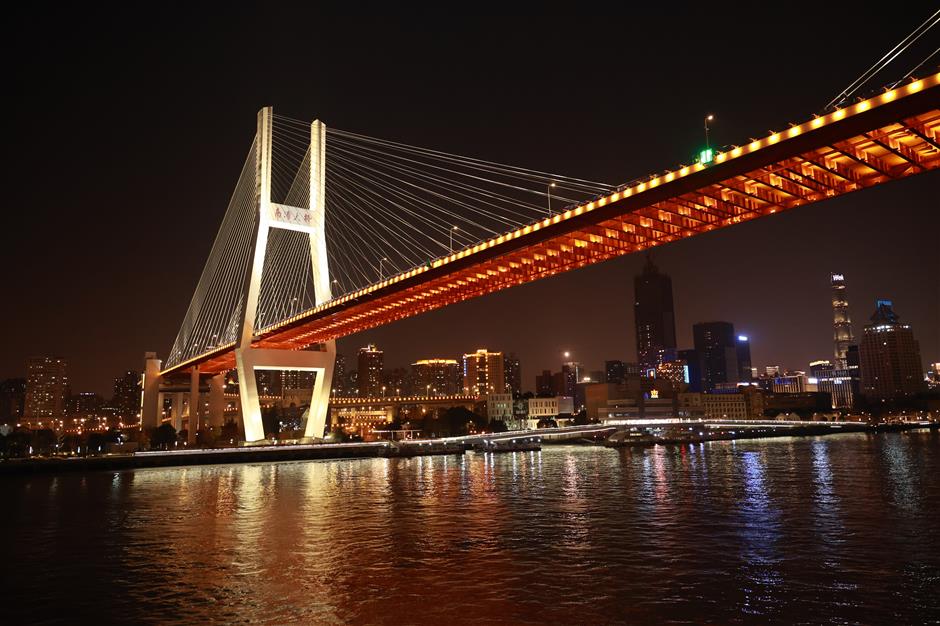 Nanpu Bridge illuminated at night as seen from the ship 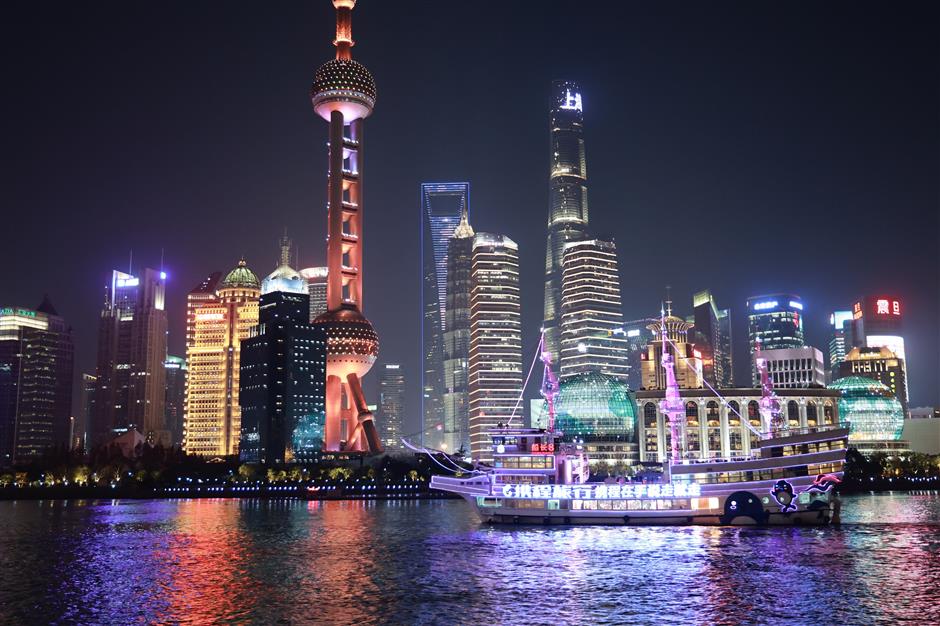 A sightseeing cruise ship sails on the Huangpu River. 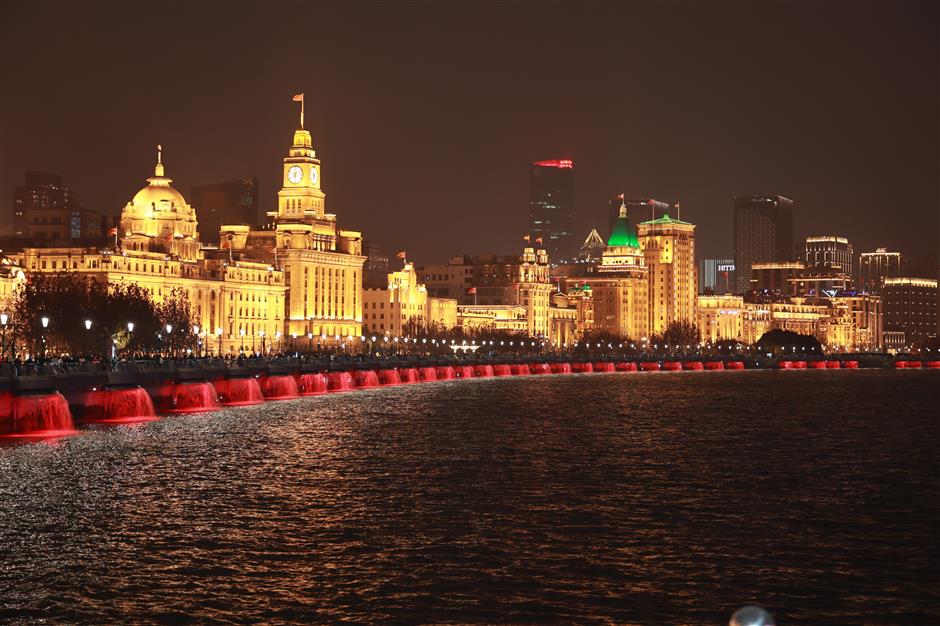 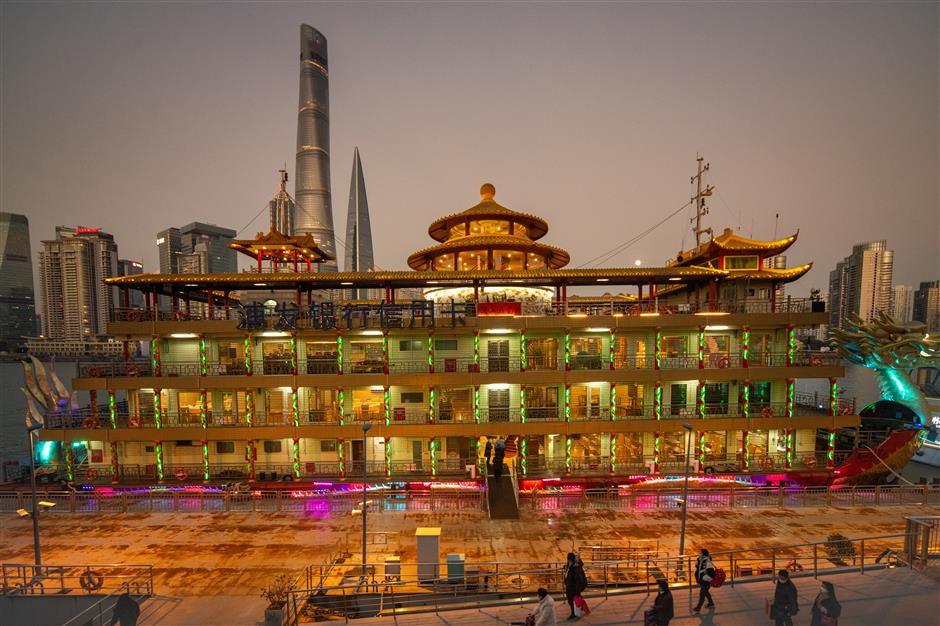 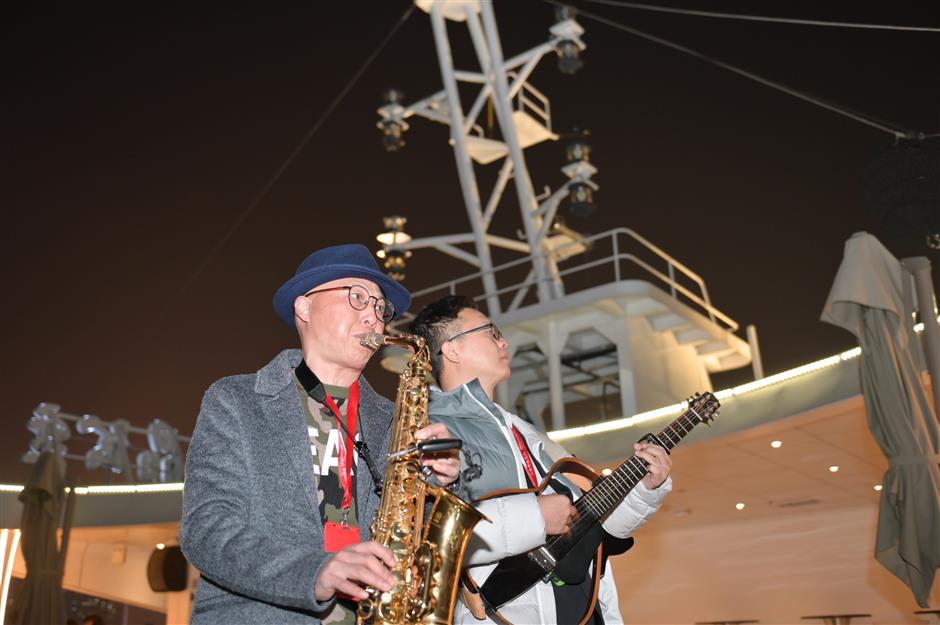 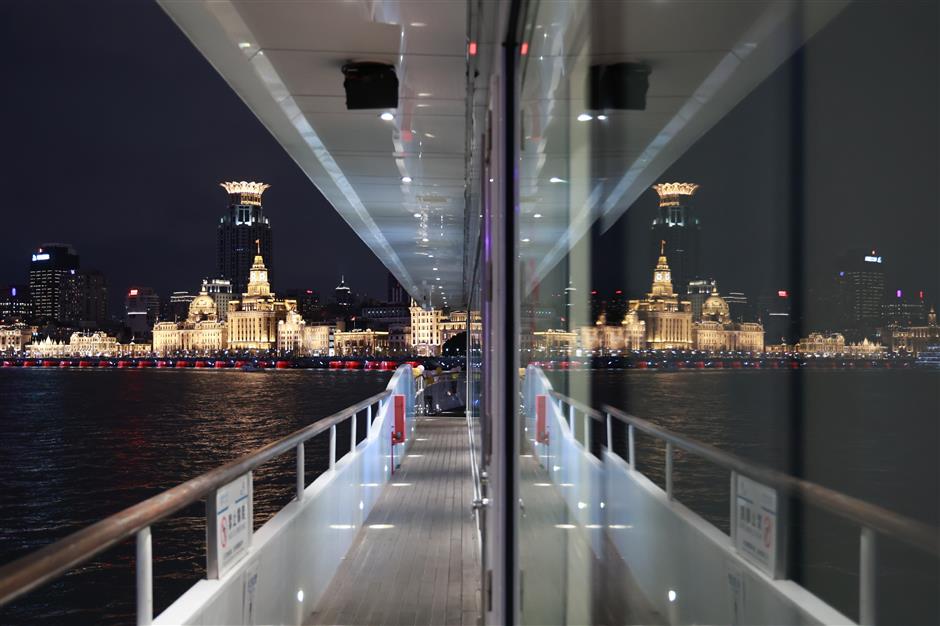 A glimpse along the gangway. 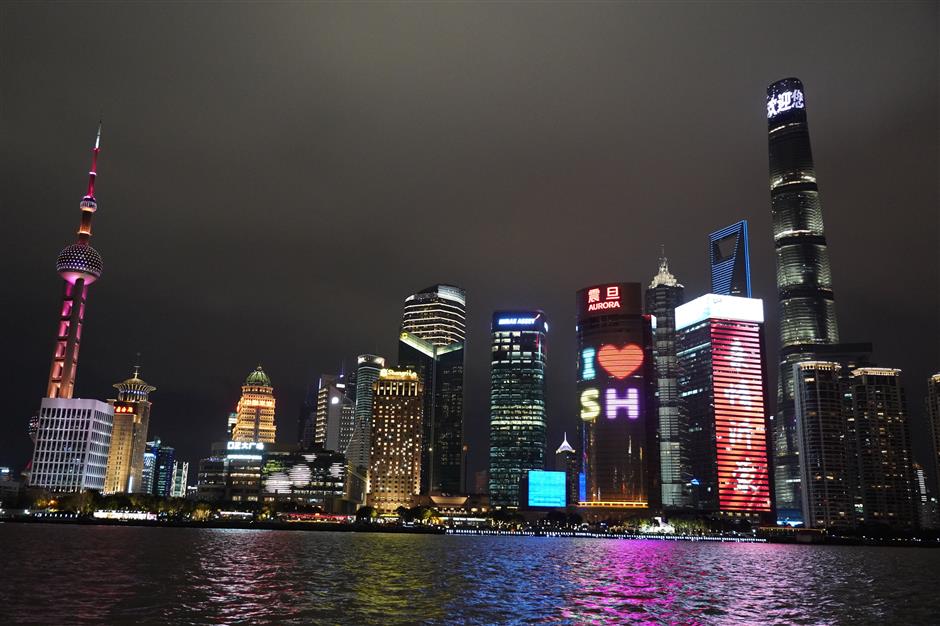 An iconic riverview of Lujiazui.

Shanghai offers a diversity of cruise tour options, with a combination of onshore trips, delicacies, and intangible cultural heritage experiences.

"When the epidemic wanes, coupled with the booming development of the local market, Shanghai's Huangpu River cruise tour is expected to embrace another golden development period," said Gong. "We are confident of that."

Also, cruise ships on Suzhou Creek are expected to be introduced this year, and the first pure electric sightseeing ship operating on Huangpu River also will be launched.

Ten cultural and tourism projects are on the agenda between 2021 and 2025. Among them, the Huangpu River area will be turned into a "world-class parlor" and Suzhou Creek area will become a "city culture and lifestyle leisure belt."