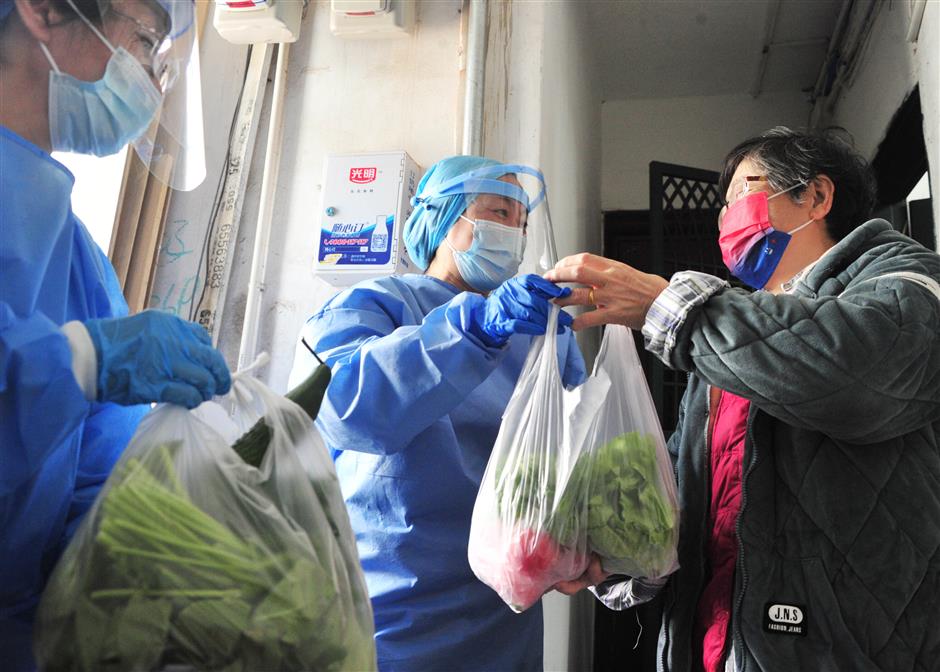 Shanghai's next phase of lockdown starts from Friday in Puxi area for a wider scale of COVID-19 screening of some 16 million citizens in a dozen districts.

The city's airports and railway services will keep operating as well as makeshift bus lines and some taxis that have a special pass to pick up passengers.

All subway lines in Puxi will be suspended along with other bus lines, taxis and ferry services during the second-phase lockdown scheduled to end on April 5.

The city government has initiated an emergency plan to ensure the supply of vegetables for citizens under lockdown and coordinated medical resources to ease the difficulty of going to hospitals, said Ma Chunlei, secretary-general of the Shanghai government.

"With the support of the 25 million citizens, we have the confidence and determination to win the battle against the pandemic," Ma told the city's daily COVID-19 press briefing on Thursday.

He admitted the government failed to make full preparation to deal with the surging number of positive cases and face the highly contagious Omicron variant.

"We sincerely accept the criticisms and are trying to improve," Ma said.

The lockdown was first imposed to do nucleic acid testing on the Pudong New Area, Fengxian, Jinshan and Chongming districts as well as parts of Minhang and Songjiang districts. 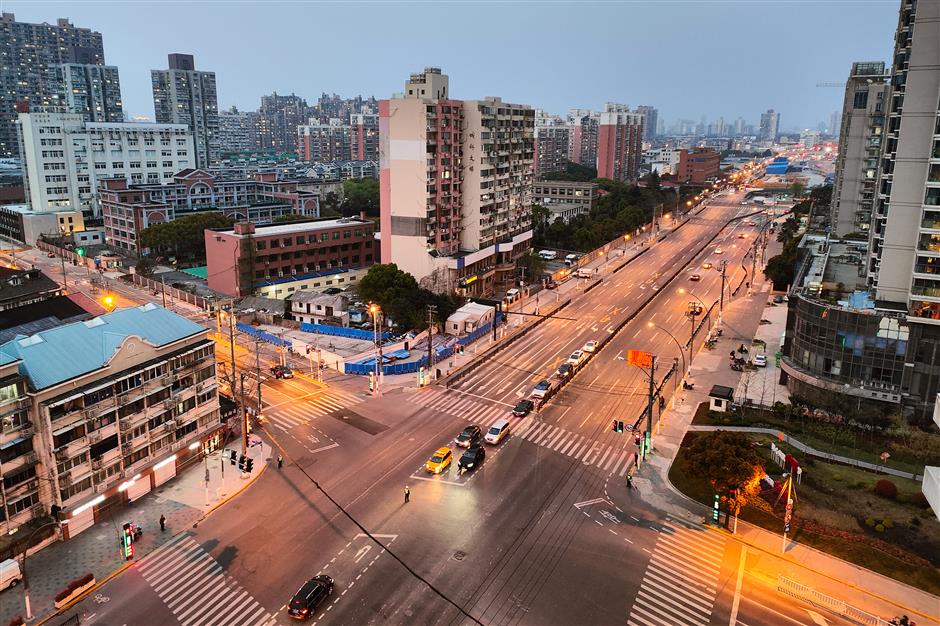 Few vehicles are seen on roads in Puxi ahead of the Phase-II lockdown.

Areas in Puxi will be put under lockdown from 3am on Friday until 3am on April 5 for polymerase chain reaction testing.

All bus lines in Puxi, apart from the airport shuttle buses, will be suspended. Some related bus services will either detour from the Puxi area or be shortened.

Four airport lines, the Airport Ring Line 1 as well as Line 8, Line 1 and the Airport Midnight Line, will keep operating, but they won't stop at locked-down areas in Puxi.

Another four airport bus lines, the Lines 2, 4, 5 and 9, will be suspended, while Line 7 will be shortened to Longyang Road Station in Pudong.

A flight or railway ticket on the day is required, along with a negative PCR report made within two days, if passengers need to catch a flight from Pudong or Hongqiao airports or a train from Hongqiao Railway Station.

Other transport services, including interprovincial coaches, some railway stations in Puxi and Pudong River ferries, will be suspended. 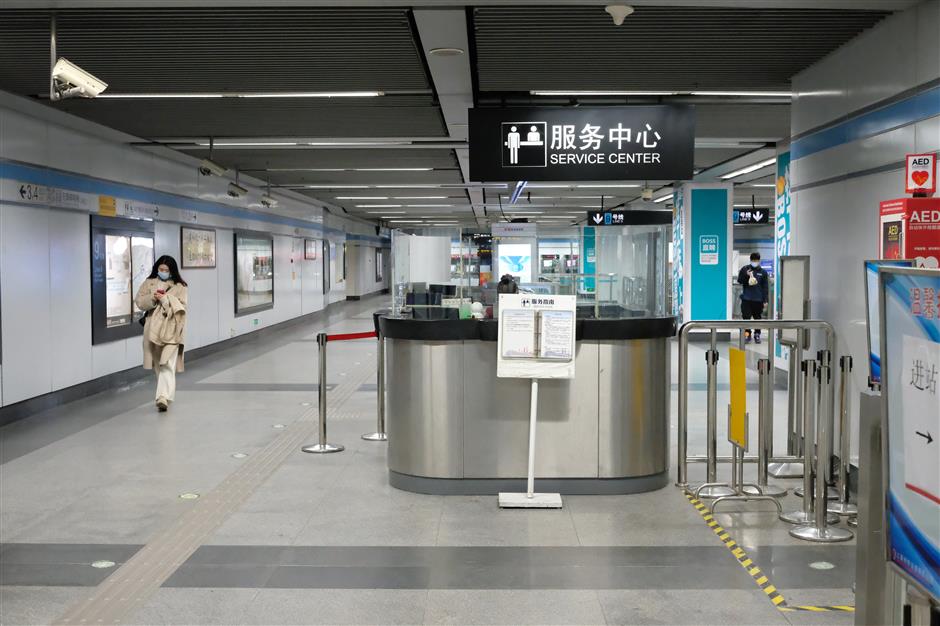 Few passengers are seen at Jiuting Station of Metro Line 9 in Songjiang District.

The transport commission has opened an airport-railway bus line to pick up arriving air and railway passengers as well as travelers departing from Pudong airport, Liu said.

The special bus line will have stops in Hongqiao transport hub, Shanghai South Railway Station, Shanghai Railway Station and a bus station on Dongfang and Weifang roads in the Pudong New Area.

Passengers must have a flight or railway ticket on the day as well as a negative PCR test report taken within two days to take the bus.

Some 100 buses, 100 coaches and 200 taxis will stand by to pick up a large number of travelers that may appear at the city's two airports and three railway stations during the lockdown.

Residents are advised to reduce their movements and ensure self-protection, said Wu Fan, deputy dean of Shanghai Medical College of Fudan University and a member of the city's COVID-19 prevention experts' team.

For PCR testing during the lockdown, Wu Fan asked residents to keep wearing a facial mask all the time apart from the several seconds it takes for a PCR sample collection. 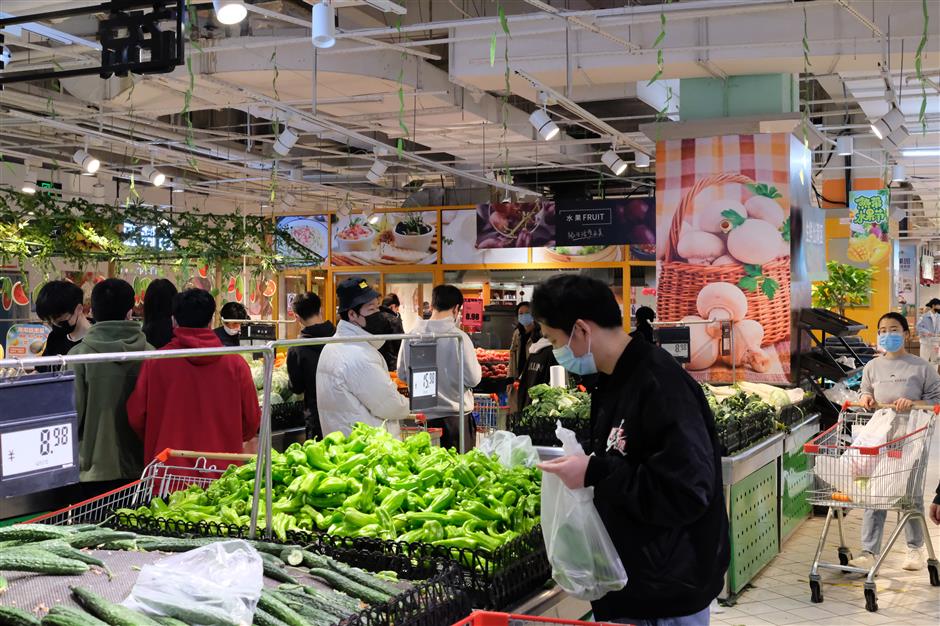 Puxi citizens shop at a supermarket ahead of the lockdown.

The suspended Metro stations during the phase-2 lockdown in Puxi between Friday, April 1, and Tuesday, April 5.