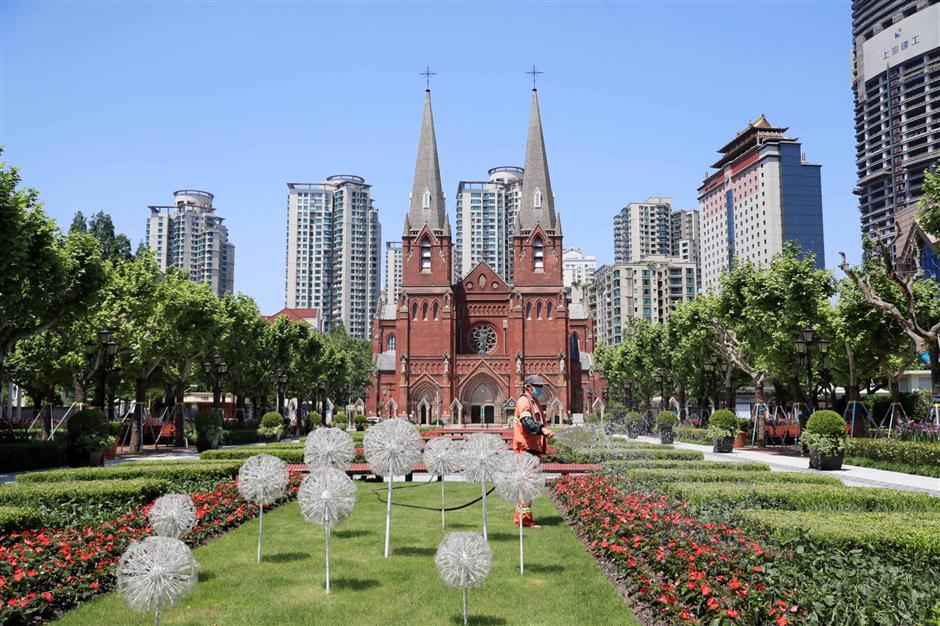 A gardener waters flowerbeds in front of the landmark Xujiahui Cathedral.

Nearly half of Shanghai districts have basically achieved zero community transmission of COVID-19 as the resurgence has been effectively put under control, Shanghai Executive Vice Mayor Wu Qing said on Friday.

"The pandemic has been put under effective control and the situation is trending steadily towards a good prospect," Wu said.

"We will deeply drive the 10 anti-COVID-19 campaigns to win the 'Great Shanghai Defense' war," the vice mayor said.

Since the beginning of the resurgence on March 1, Shanghai has reported 55,131 locally transmitted COVID-19 cases and 542,293 asymptomatic cases, plus 871 imported infections. Some 748,239 close contacts have been placed under quarantine.

The number of daily infections has trended downwards continuously for two weeks since April 22 to under 5,000 recently, mainly from people already under lockdown or in quarantine.

The Rt value, or effective reproduction number, of the pandemic has fallen to below one for over 10 days, meaning the risk of community transmission has been effectively contained, Wu said.

Apart from Jiading District, the areas of Fengxian, Jinshan, Chongming, Qingpu and Songjiang plus downtown Putuo and several subdistricts and towns in the Pudong New Area have reached the standard of "basically zero community transmission." 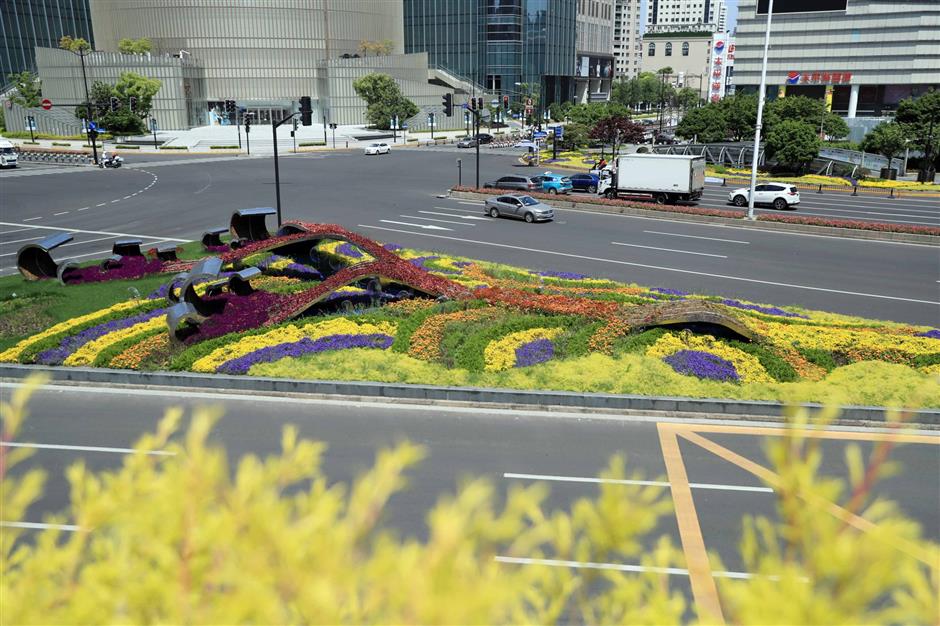 More cars are visible on roads at Xujiahui commercial hub.

The standard means less than one positive case is found in every 100,000 residents within the controlled and precautionary areas as well as among those who are out of closed-loop management for three consecutive days.

If there is no positive case in these areas for three days, the district will be defined as "zero community transmission."

Citizens within the precautionary areas in these districts on the city's outskirts are allowed to move around within the districts. They can go to reopened supermarkets, drugstores and hospitals. Public transport will be gradually restored, while private cars can also be driven in limited areas.

Residents in precautionary areas in Putuo and the five towns in Pudong are allowed to move or drive around within their subdistricts or towns and go to designated supermarkets and drugstores.

In other downtown districts that have yet to achieve the goal (including Huangpu, Jing'an, Xuhui, Changning, Hongkou, Yangpu, Baoshan and Minhang), residents in the precautionary areas are only allowed to move around within residential compounds. One member of each household will be allowed to shop at supermarkets or drugstores in a limited time twice every week.

However, the vice mayor said no slackening off could be allowed because the pandemic situation is still like "sailing against the current."

The number of daily infections has barely declined and there are still infections outside the locked-down areas and quarantine, posing risks of resurgence, Wu noted.

As one of the 10 campaigns, the antigen + PCR screening will continue with enhanced efficiency. A single round of PCR testing can be completed within a day. Over 45 million PCR tests have been conducted between May 1 and 5.

The thee-area designation will be adjusted frequently. A total of 16.67 million Shanghai citizens are now within precautionary areas, that is the communities, villages, companies or sites without a positive case in the past two weeks.

The number of residents in the locked-down areas has been reduced to some 2.35 million, while about 4.3 million citizens are living within controlled areas, according to Wu.

The recovery rate of COVID-19 infections will be further elevated with a low fatality rate. Some 17,644 patients are being treated at local designated hospitals, while 97,327 are under medical observation and treatment at makeshift hospitals.

Over 80 percent of the city's infections, totaling 481,881, have been discharged after making a full recovery, Wu said. 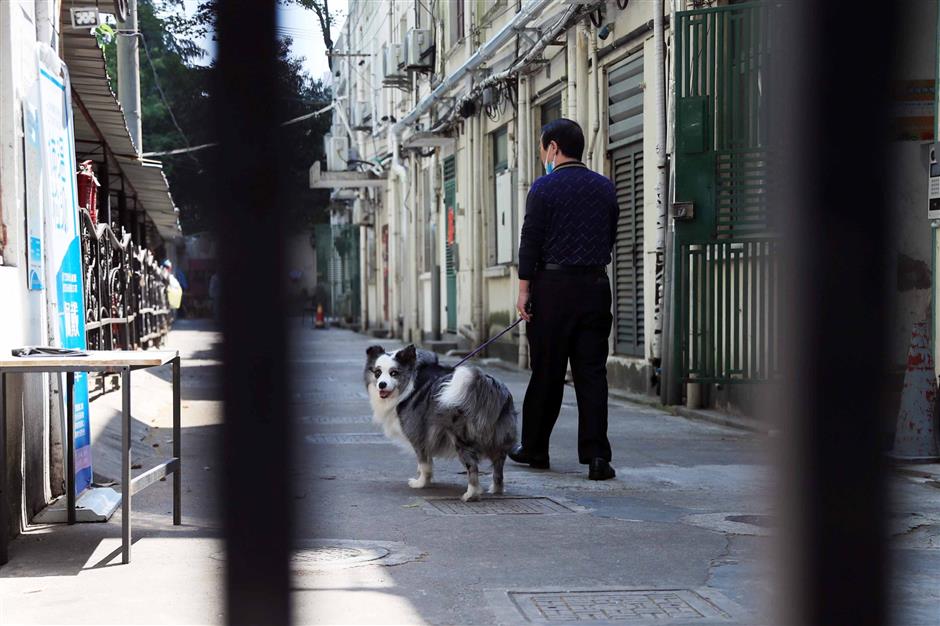 A resident in a precautionary area walks a dog in the residential compound.

Wu said old residential compounds, urban villages, construction sites and senior homes, plus delivery staff, will become the focus of the next phase of the anti-COVID-19 campaign.

People who test positive during PCR + antigen testing will be transferred and quarantined immediately to cut off community transmission.

The city will also keep enhancing the management of people who want to leave the city, with strict inspections of their PCR and antigen test reports to prevent the pandemic from affecting other provinces and cities.

"Continuous PCR testing has become a key strategy to stay ahead of the virus, find the potential infections and cut off the transmission chain," Wu said.

He said the repeated testing is necessary because of the highly contagious, fast transmission and strong concealing features of the Omicron subvariant.

The multiple testing can identify people who are newly infected. They have yet to expel the toxins and will test negative during a single PCR test, the vice mayor explained.

He said the city will improve arrangements to create safe, clean and orderly sample collection environments, along with timely disinfection measures, after positive cases are transferred to relieve people's concerns about the possibility of cross infection. 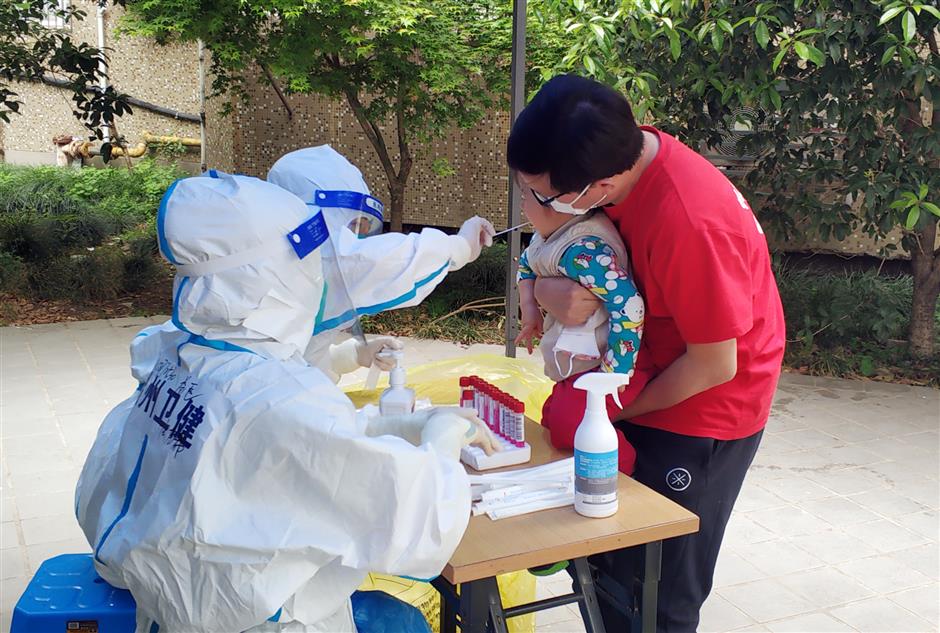 A citizen holds a baby as it takes a PCR test at a local community.