Suzhou Creek cruises to be 'floating parlor on water'

A river and a city – the story of Shanghai starts from here. The vicissitudes of the city are concentrated in the meandering of the Suzhou Creek, which nurtures the people of Shanghai and is a silent witness to its development.

On Saturday, cruise tours were launched on the creek, known as the mother river of the city, which bears the reminiscence of generations.

With the rudder rotated, history flows and Shanghai makes a leap forward towards "a world-class waterfront with global influence".

A cruise ship sails on Suzhou Creek on Saturday.

The launch of the service marked the opening of the Shanghai Tourism Festival, the annual tourist extravaganza of the city, which is in its 33rd year.

Suzhou Creek holds a special place in the hearts of Shanghai residents. The region's silks and ceramics were carried along the Maritime Silk Road in the Tang Dynasty (AD 618-907), and centuries later the area became an early industrial hub of the city.

Since Shanghai was forced to open its port in 1843, the creek has been the backdrop for dramatic landmarks in the city's history. It was the scene of wartime suffering and the birthplace of China's earliest national industries.

Its industrial heritage left the creek's water murky in the 1980s. Cleaning up the pollution and redeveloping its banks have been projects underway for years. Riverside areas spanning 42 kilometers along the creek have now become the "backyard garden" of local citizens. 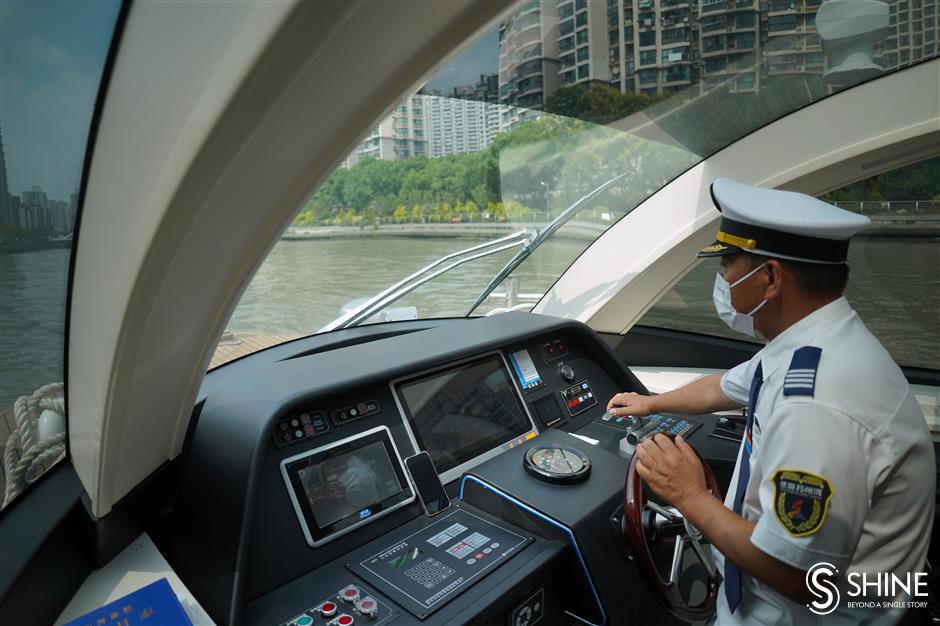 The captain steers the ship.

The cruise ship, 14.8 meters long and 4 meters wide, has a capacity of 20 passengers. The journey lasts about two hours and stretches about 17 kilometers at present.

Four of them – the Waitanyuan, Sihang Warehouse, Changhua Road and Changfeng Park piers – have been put into trial operation.

The rest will come into use before the end of the year. 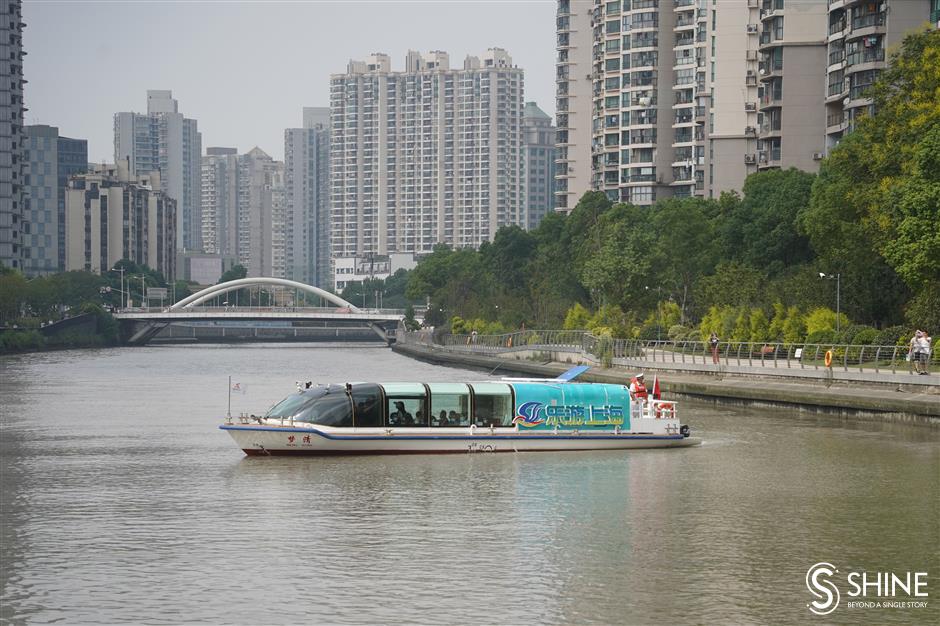 Safety and pressure tests on the cruise tour will be conducted based on river course and hydrological conditions, the Shanghai Administration of Culture and Tourism said.

At present, the tour has not hit the market, as continuous adjustments and improvements will be made based on trial operations, and tourist products of the cruise tour will be released at proper times, the administration said.

Three routes will be launched.

One is designed for group tours and will last one hour, operating between Changfeng Park and Changhua Road piers.

One targeting individual tourists will have the same duration and sail from Waitanyuan, Sihang Warehouse and Changhua Road piers.

The last one will be a customized tour service and will mainly serve guests with leisure and business demand.

Ticketing is yet to be announced. 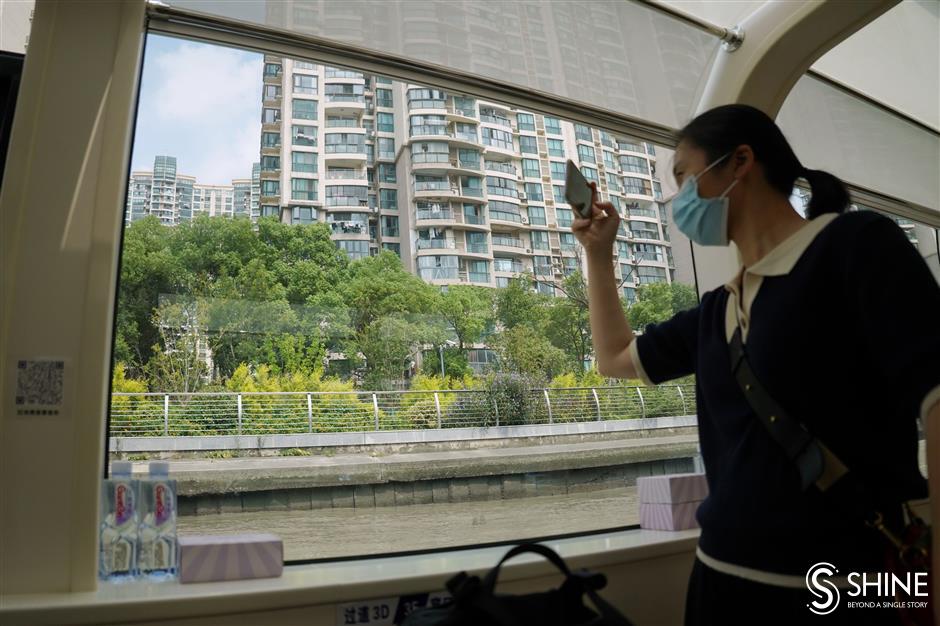 A photo during the trip

"We plan to create a 'floating parlor on water' by launching the service," said Fang Shizhong, director of the Shanghai Administration of Culture and Tourism.

"The cruises will enable people to appreciate the scenery along the creek and take a stroll at a number of attractions onshore," said Fang.

Based on research conducted since November last year, there are 205 venues with cultural and tourist value along the creek, according to the administration.

It is a journey into the city's past, present and future, enabling people to savor the unique splendor of haipai (Shanghai-style) culture.

The route will string together a number of old and new, famous and niche cultural and tourist pearls and historical remains of the city in Huangpu, Jing'an, Changning, Putuo and Hongkou districts.

These include historical buildings, blocks, industrial remains and public cultural spaces, according to the administration.

The eight piers were carefully selected.

People can walk on a bridge at the Danba Road pier and reach an industrial civilization exhibition hall of the Suzhou Creek which will open soon. 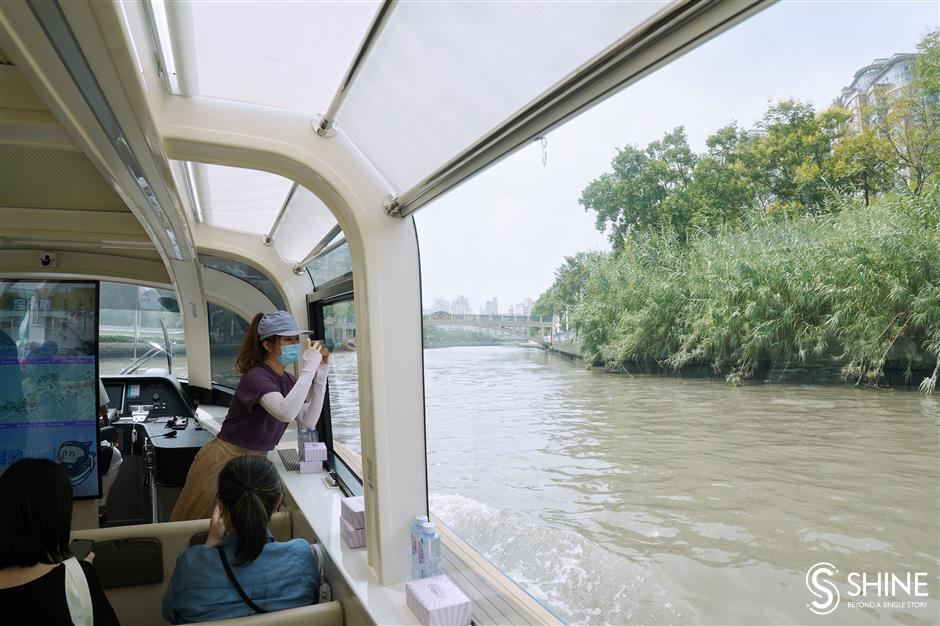 "The cruise tour opens a window for tourists to savor the history and cultural essence of the city," said Liu Deyan, a tourist researcher and associate professor at Shanghai Normal University.

The hop-on-and-hop-off cruise tour service will make the Suzhou Creek a "world-class tourist destination," according to a development blueprint.

During the development of the Suzhou Creek tourism, culture and sports elements are injected, and a digital operation and management system will be applied.

The five districts along the creek have unveiled their tourism development blueprint based on their cultural and tourist resources.

In Huangpu District, culture and art landscape, waterfront sports and leisure walk belts are being created, while Hongkou District is developing night cultural and tourist consumption venues along the creek.

In Jing'an District, a history and culture experience zone is under development and an art-themed tourist zone is taking shape, while Changning District will present a leisure block blending historical buildings and leisure functions for residents.

Putuo District's waterfront areas will be turned into an experience area of water sports and leisure activities for families with children. 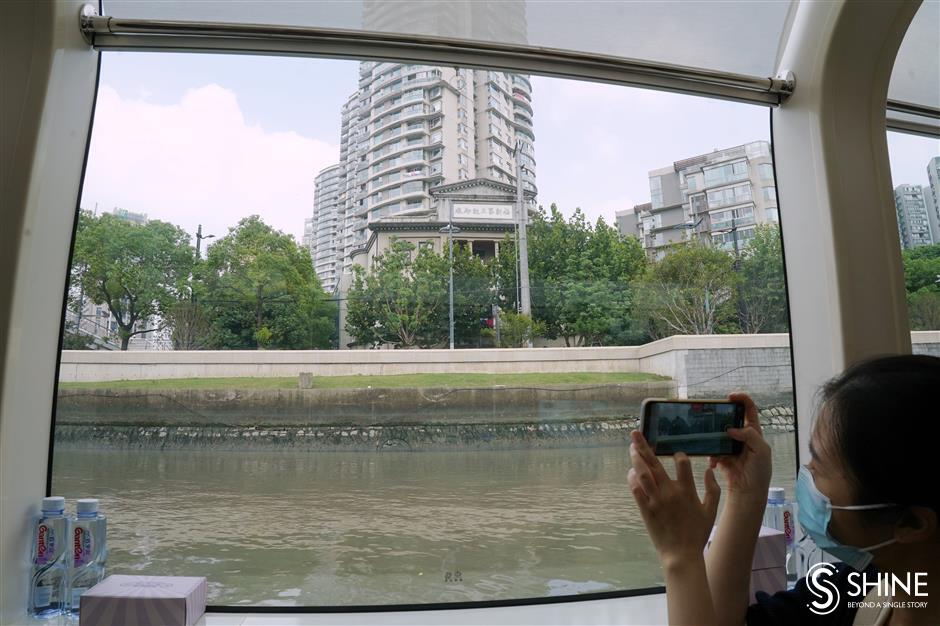 A passenger takes photos during the journey.

Hu Xiaoli could not hide her excitement on the moment. She was one of the lawmakers who made a joint proposal on the resumption of Suzhou Creek cruise tour during Shanghai's "Two Sessions," the annual sessions for lawmakers and political advisers, last year. She spared no effort to make the dream come true.

The average width of Suzhou Creek is nearly one tenth of the Huangpu River, which is just one obstacle confronting the operation of the cruise tour.

"The impact on residents' normal life living nearby must be given into consideration," said Hu.

Powered by lithium iron phosphate storage batteries, the ship produces zero pollution and noise. It will be charged at the piers.

Intensive clean-up projects and redevelopment of the waterfront along Suzhou Creek in recent years have yielded fruitful results.

"Eco-friendly cruise ships vividly demonstrate the ecological civilization development of the metropolis of Shanghai," said Liu, recalling the filthy past of the creek.

The cruise tour is an important step to develop tourism along the creek. New vitality will be injected into it, which will boost the upgrade of nearby commercial facilities and blocks, making it an alluring attraction of Shanghai.