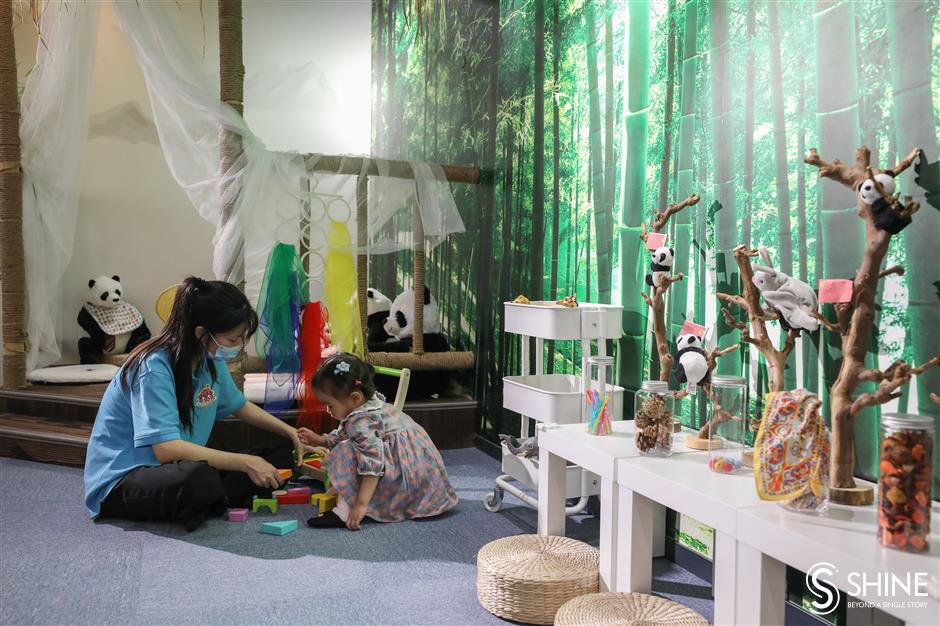 A girl plays with toy bricks in a "Baby House" in the Jiangning Road Subdistrict.

In a workday morning, the 69-year-old flits about the city getting her medicine, a haircut and a takeaway lunch.

It would've been impossible to cram everything in, in just two hours, without the help of "Baby House," a citywide pilot project which offers daycare services to children below 3 years of age.

Like many elderly people in China, Ma is laden with the responsibility of looking after her grandchild in the daytime as the young parents struggle to juggle work and family. Now "Baby House" has allowed Ma the freedom to better manage her day.

At 8:30am, she sent her two-and-half-year-old granddaughter to the "Baby House." Then, she went about her business, returning to pick up the girl at 10:30am.

"I can finally snatch a few hours off," she said. 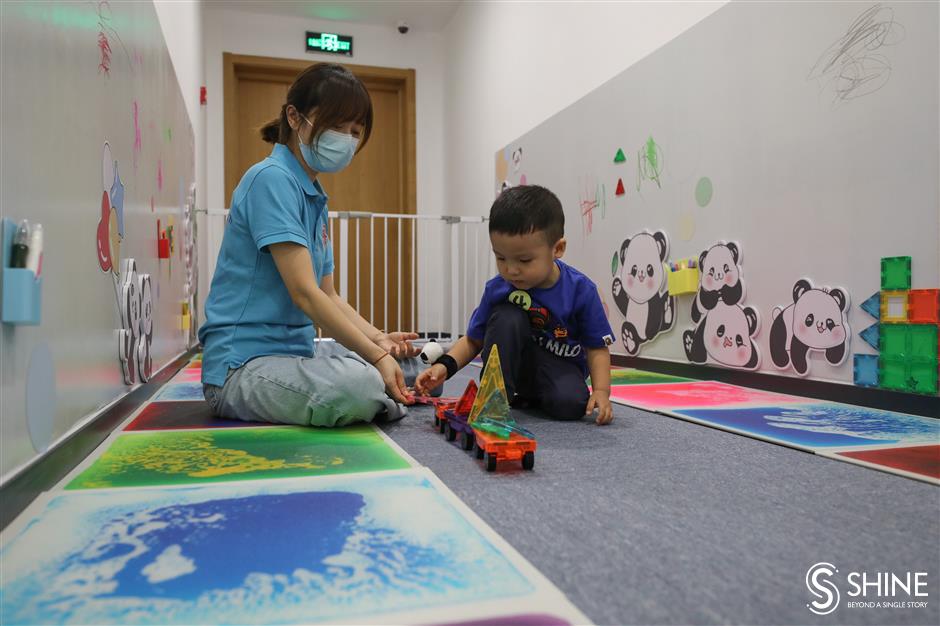 A boy plays with toy cars in a "Baby House" in the Jiangning Road Subdistrict.

This "Baby House" is set up at the comprehensive eldercare center of the Jiangning Road Subdistrict in Jing'an District. It covers an area of 160 square meters, including a 60-square-meter outdoor playground, on the third floor, which is sufficiently large enough to hold 45 children at the same time.

"I trust leaving my granddaughter here. The subdistrict cooperates with the district's education authority to run the place and provide professional, quality services," she said. "It allows me to manage my day, and my granddaughter learns how to socialize with her peers before she enters kindergarten."

Childcare to children below the age of 3 is a challenging issue in today's China, where most kindergartens only admit children 3 years of age and older. 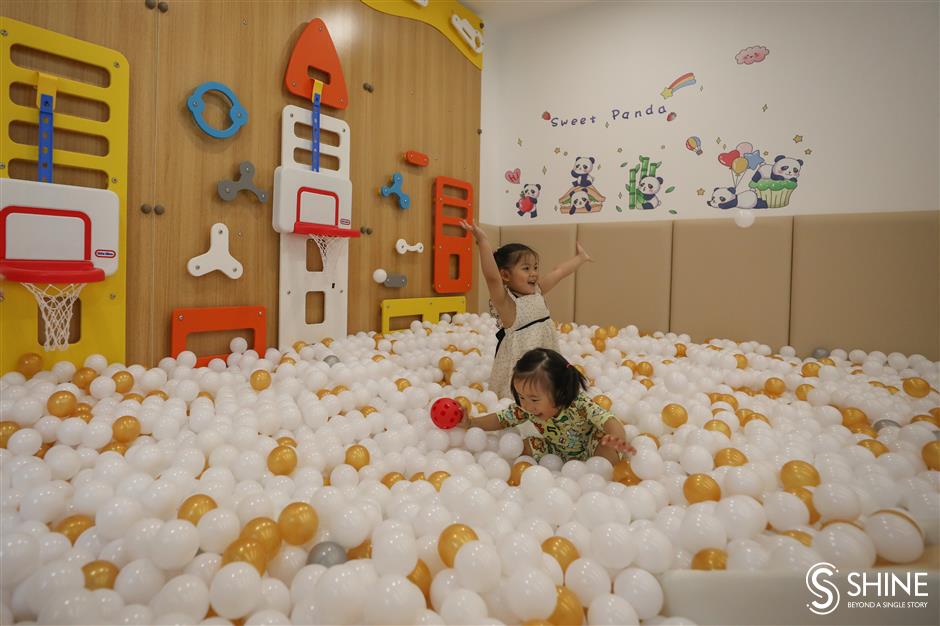 Children have fun in a "Baby House."

A survey by the National Health Commission shows that China has nearly 50 million 0-to-3-year-olds, but the enrollment rate in daycare is only 4.1 percent, far lower than the average rate of 50 percent in developed countries. Even for big cities like Shanghai, only 14 out of 100 2-year-olds are admitted to childcare facilities, according to a survey by the Shanghai Women's Federation.

So, it's common for working parents to leave their children to their parents to take care.

In recent years, Shanghai has been setting up childcare facilities in communities to relieve their burdens. This year, as an intensified effort, the city launched the "Baby House" pilot project in order to "embed" childcare service in existing venues like community eldercare centers and kindergartens. 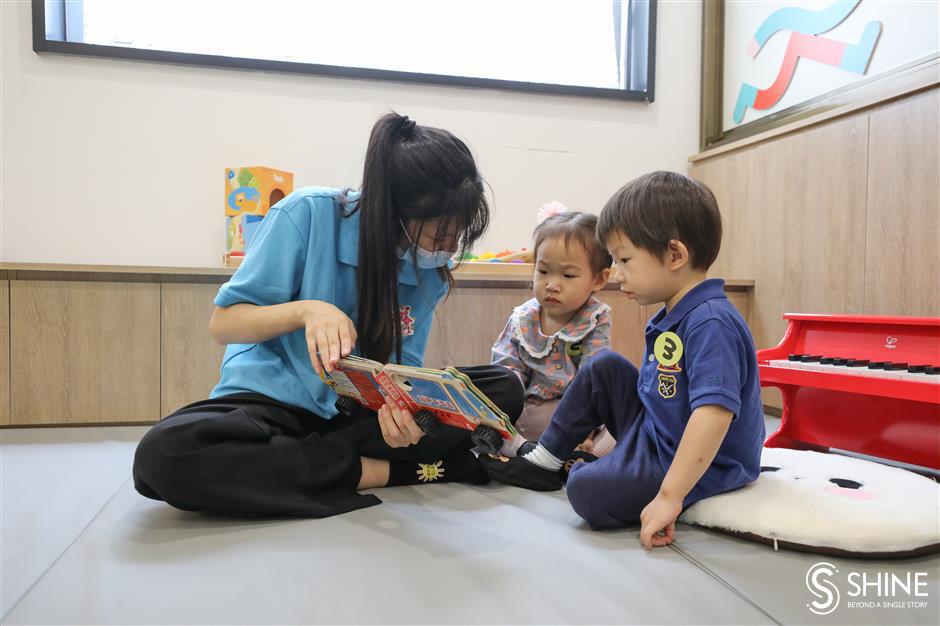 Reading time for two children in a "Baby House"

So far, Jiangning Road Subdistrict has pioneered the city in building three "Baby Houses." The other two are in the community CPC service center and the local Nanyang Experimental Kindergarten.

According to the subdistrict, the three sites are currently free of charge. Online reservation through the subdistrict's WeChat account (injiangning) is required, and it is expected to be accessible in the city's e-governance platform Suishenban in the future.

Construction on more sites have been placed on the agenda, such as at the Wujiang Kindergarten and the Yuyao Road Kindergarten, the subdistrict officials said.