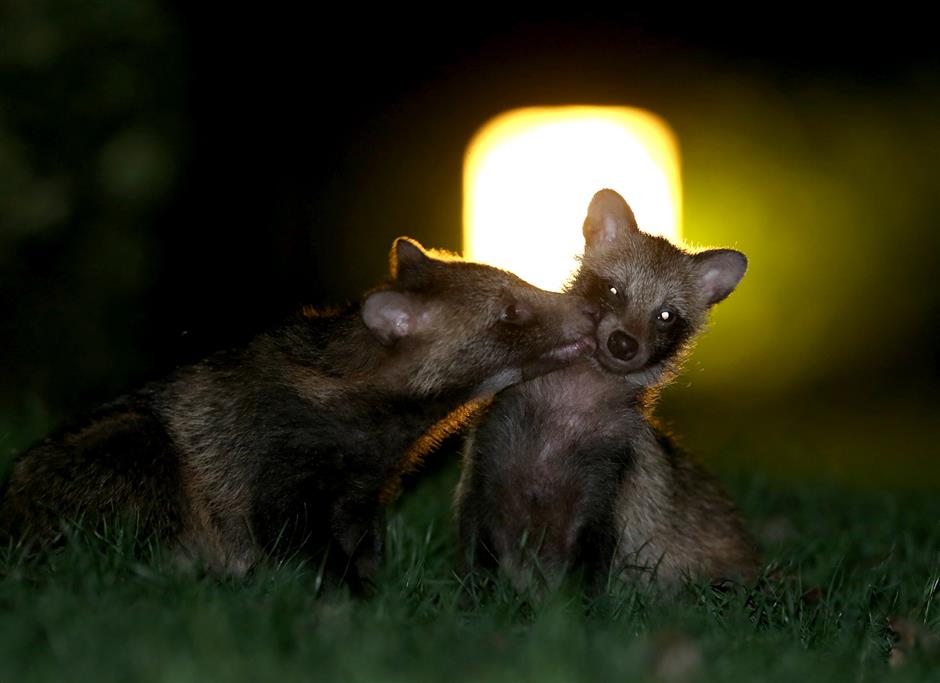 Raccoon dogs, an animal native to Shanghai, have been spotted in nearly half of surveyed residential complexes in a suburban district of Shanghai, an investigation involving mass participation of city residents found.

"It's estimated that there are between 3,000 and 5,000 raccoon dogs in Shanghai," according to Wang Fang, a researcher at Fudan University's School of Life Sciences, head of the team.

"Based on our observation and investigation, the number of raccoon dogs is steadily increasing in the city with expanding movement areas," Wang said.

Among the 50 surveyed residential complexes in Songjiang District, 22 have traces of raccoon dog activity, with the number ranging between 1 and 50, and an average of 10.82 per residential community.

A vlog shot in Songjiang with cute raccoon dogs' activities

The average population density of the animal is 1.08 per hectare.

Residential complexes where raccoon dogs were spotted are mainly in the northern part of Songjiang, according to Wang.

"We found that cat food and trash would significantly change the population density of the animal, leading to an abnormal increase," said Wang. "Improper management of waste and cat food lead to one extra raccoon dog per hectare, doubling the normal figure."

"Meanwhile, the space of residential complexes and building layouts have no direct connection with the population density of the animal."

In Shanghai, biological diversity is witnessing rapid development as the Yangtze River Delta region is the most urbanized region in China. 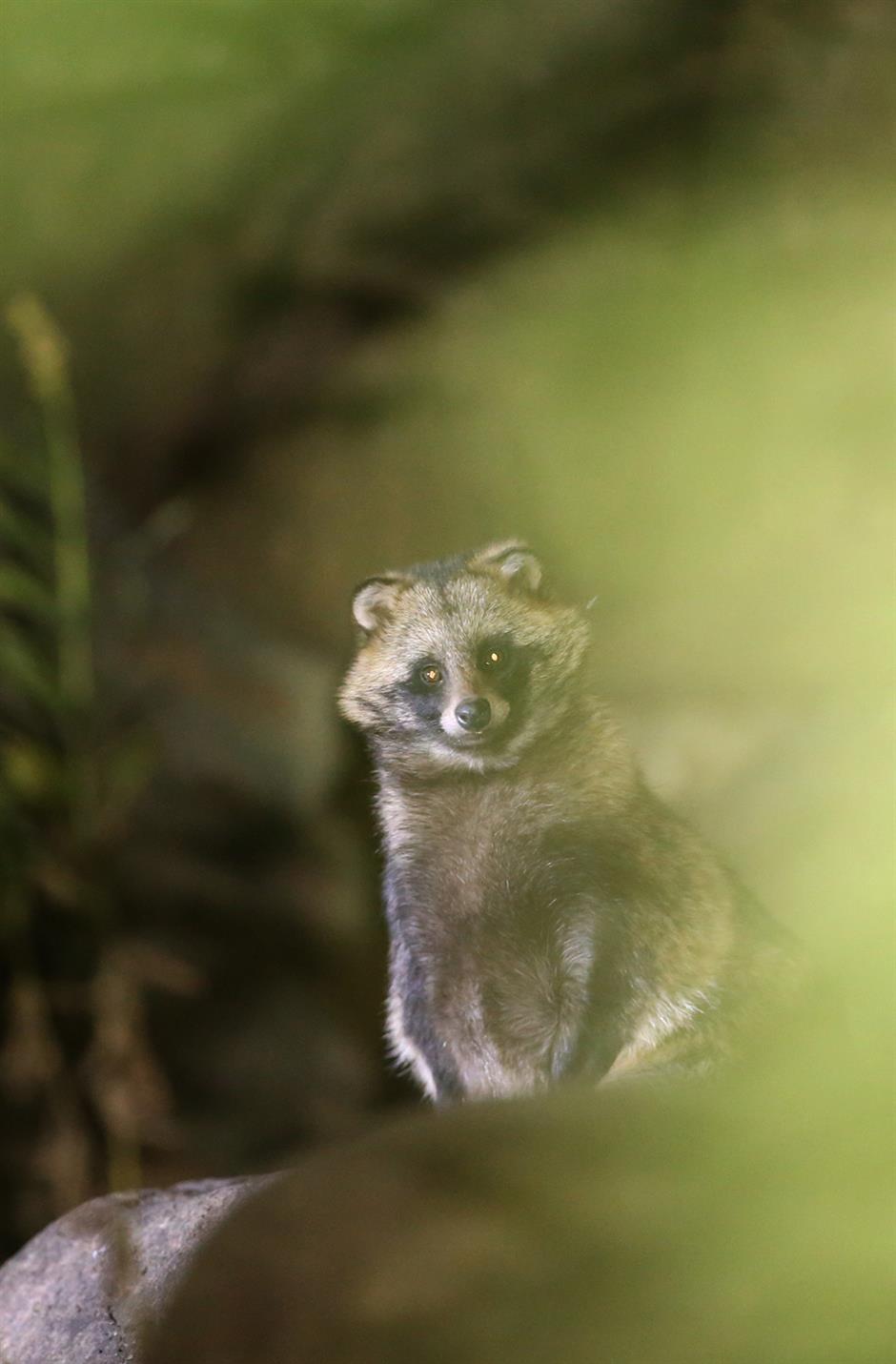 A raccoon dog at a residential complex in Songjiang.

The city was once home to a variety of mammals such as rassies, raccoon dogs, river deer, badgers and yellow weasels. Many natural habitats of these animals have been lost to urban construction, threatening the survival of some species.

"Raccoon dogs, however, have adapted to the urban environment with the number rapidly increasing due to constantly expanded living spaces," said Wang.

Since 2019, a program was launched by the Shanghai Forestry Station, a conservation biology research team at Fudan University and the Shan Shui Conservation Center. It focuses on the research and protection of raccoon dogs, and the improvement of biological diversity. Various methods such as on-site visits, monitoring of infrared cameras, the analysis of food habits, and epidemic disease and GPS tracking are taken.

For the first time, a program involving the public, with participants nicknamed "citizen scientists," was launched in June to study the movement of the animal and population, as well as people's attitude toward them. The program drew more than 300 applications, with over 70 percent participants below 40 years old.

Due to COVID-19, the study was only conducted in Songjiang District, where most frequent raccoon dog movement was spotted over the previous years.

About 150 residents participated in the study.

In the future, the study will be expanded with more "citizen scientists" invited, the Shanghai Greenery and Public Sanitation Bureau said. 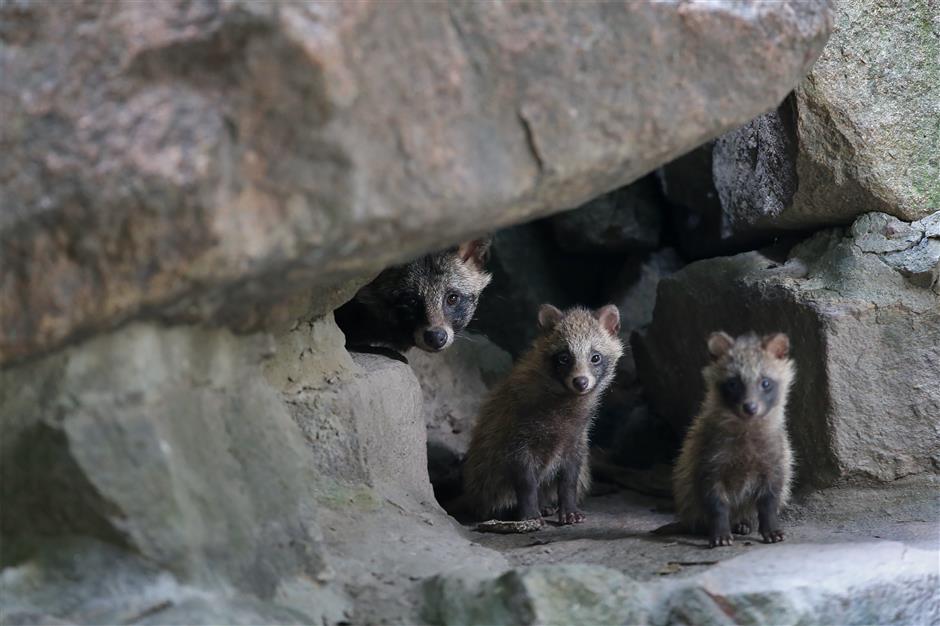