Chengdu is creating an independent non-motorized transport system to connect with parks, tourist spots and other public cultural and leisure facilities.

The ring-road Jincheng Greenway, which is part of the Tianfu Greenway project, is quite rare in Chinese cities in term of scale, according to officials from Chengdu Urban and Rural Construction Commission.

Jincheng Greenway will include a two-way bicycle lane along the 85-kilometer Raocheng Expressway of Chengdu, nine radial greenways stretching inward connected to the No. 3 Ring Road and other secondary greenways. The total length will reach up to 500 kilometers.

The colored-asphalt bike lane will be 6 meters wide and suitable for professional cycle races and marathons.

As of August, 1,585 kilometers of the greenways around the city have been completed, about one-tenth of the total. It includes several major bridges on the ring-road part.

“It is more than just building bridges and roads. Construction also includes the supporting facilities in the area and the landscape, such as shops, toilets, parking lots, resting pavilions or outdoor sports venues,” said an official with the scenic and urban landscape department at Chengdu Urban and Rural Construction Commission.

Chengdu will also establish a diversified tourism industry in the neighborhood, offering services ranging from themed towns and themed ecological parks, to rural scenic resorts and agricultural tourism. It aims to boost the development of travel-related businesses. 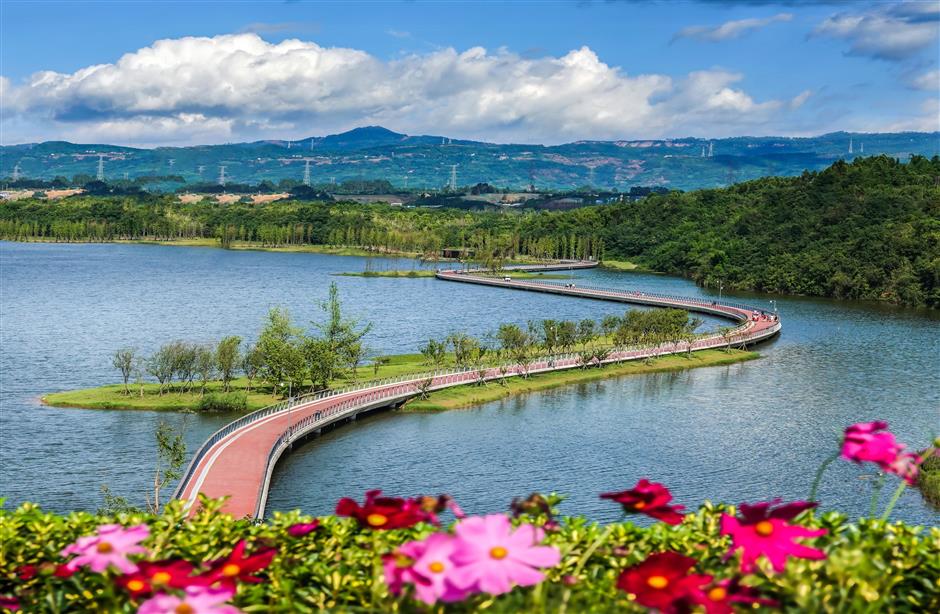 Greenways are the key to making Chengdu an ecologically livable city. By 2035, the city plans to develop a three-tiered greenway system built along the rivers, mountains and ring roads of the city and inside each district and community.

The total length of such a “green web” could reach 17,000 kilometers, the longest greenway system in the world.

One important aspect of the plan is related to environmental preservation. The idea of protecting the city’s ecological resources came even earlier.

The government has planted a 50-meter-wide shelter belt along each side of the No. 2 Ring Road, and made it law that the 500-meter extended area along Raocheng Expressway and related wedge-shaped areas were a “round-the-city ecological preservation zone,” including rivers, lakes, forests, farmland or greenbelts.

The commission found out in recent years that the city could be easily flooded by large blocks of buildings if nothing was done. They cause problems such as traffic jams and urban heat islands.

The function of the greenbelts is to segregate these urban clusters and let the city breathe again. Chengdu’s ecological blueprint is in sync with the city’s urban development. 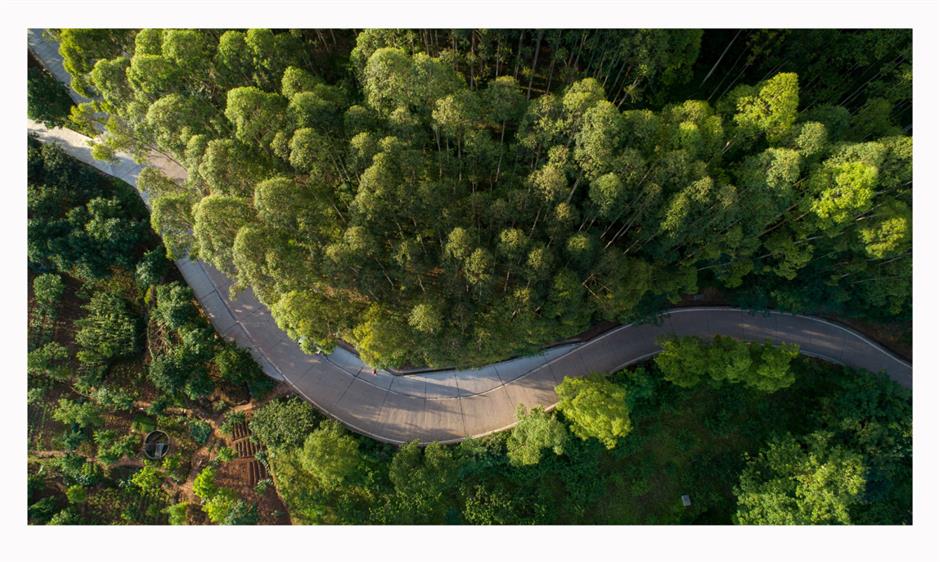 The Longquan Mountain City Forest Park is located between downtown area and eastern new area, spans a total area of 1,275 square kilometers. The under-construction Tianfu International Airport is only 16 kilometers away.

The forest greenway, making best use of the existing roads, is expected to reach 800 kilometers. There are a dozen of observation decks highlighting some of the best views overlooking the east and west part of the city.

The park is also highly accessible via different transportation routes, and tourists can get to the park within 30 minutes. In the near future, there will also be seven new expressways connecting it to the populated urban areas on both sides.

According to the officials from Longquan Mountain City Forest Park management committee, protection of ecosystem is of the top priority, and the forest cover rate will increase to 70.5 percent by 2030.

The committee aims to build the park into the “green lung” of the city, a high-end entertainment park for the public to meet the increasing demand for green space from local residents.

When the park is fully completed in 2035, the forest area in Chengdu will increase 10 square meters per capita and water holding capacity will increase 840 million cubic meters each year, carbon sequestration will reach 310,000 tons, and release oxygen of 230,000 tons, according to the committee. 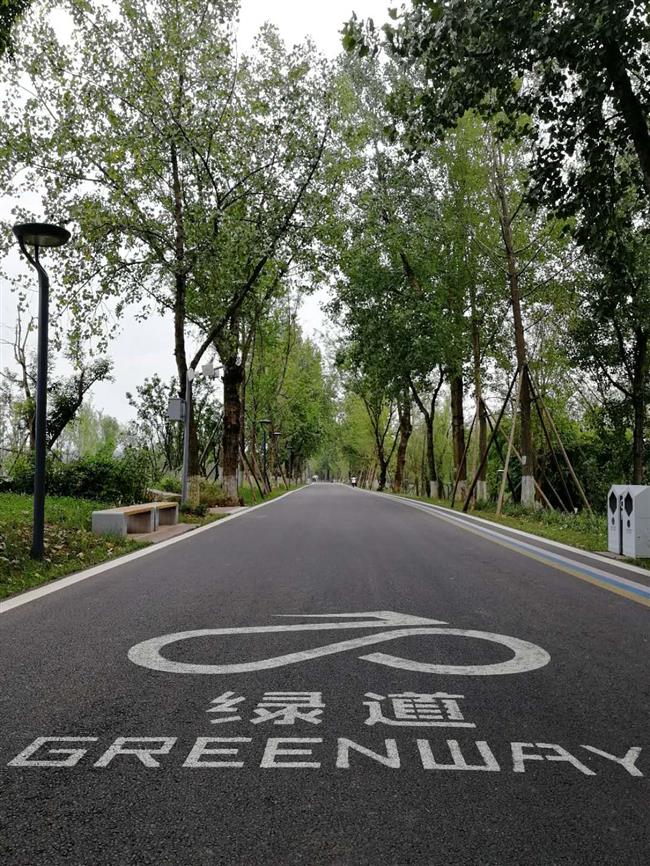 A shaded section of Zhigu Greenway in Tianfu New Area

At district level, construction of greenways fits well into overall blueprint of the area’s industrial layout and urban planning.

The Zhigu (intelligent valley) Greenway built along Luxi River is located within Tianfu New Area, a state-level new area in Sichuan Province which aims to become “a rising growth pole in west China, an economic highland in the opening-up for the Belt and Road Initiative and an international modern new town for business and residency.”

The 1,578-square-meter planned new area covers the southern part of Chengdu and a small part of neighboring Meishan City, with industry clusters allocated to its different functional areas. The core area where the greenway is mainly features high-tech service industry, MICE industry (meetings, incentives, conferences and exhibitions) and headquarters economy.

Tianfu Luxi Zhigu is both an ecological greenbelt and an economic belt for aggregating some of the leading companies and research institutions in artificial intelligence, cloud computing and information securities.

“In our opinions, a Garden City can not be easily understood as garden plus city. Every word of Gong Yuan Cheng Shi (Garden City) has its meaning,” said Huang Wei, chief of the department of major projects and public facilities of Tianfu New Area Management Committee.

“Gong indicates something every one can share; Yuan refers to ecology with greening space and landscape; Cheng means the place to live with comprehensive functions like transport, healthcare and education; and Shi represents production, a driving force for a city’s sustainable development,” said Huang.

“The greenway system should be representative of all these aspects, incorporating people’s life and work.”

An exemplar of this is Unicorn Island. The 1,006-mu (67 hectares) island is located east of Xinglong Lake with other three sides surrounded by Luxi River. It hopes to be a hub for attracting and incubating unicorn companies (startups with a value of US$1 billion) in new technology businesses.

Construction began in July this year and is expected to finish by 2022. Companies such as SenseTime (a unicorn Chinese artificial intelligence service company) and ARM Holdings (a British multinational semiconductor and software design company) have already agreed to place one of their China headquarters on the island.

The island will also be a showcase for some of the top technologies in sustainable living including green roofs, distributed energy and smart building.

Elements of the new technologies will also be present in the overall construction of Zhigu Greenway.

Huang told Shanghai Daily that in the future, the greenway will be covered by free Wi-Fi. Unmanned electric sightseeing cars equipped with smart audio guides are also in their consideration.

Greenway is a “green economic belt” that doesn’t have production factories.

“We hope that the greenway and the services attached to it will offer multiple reasons for people to stay. They can work here with their laptops, order a coffee, see an exhibition or join an exercise group. These are the true economic values derived from ecological development,” Huang added. 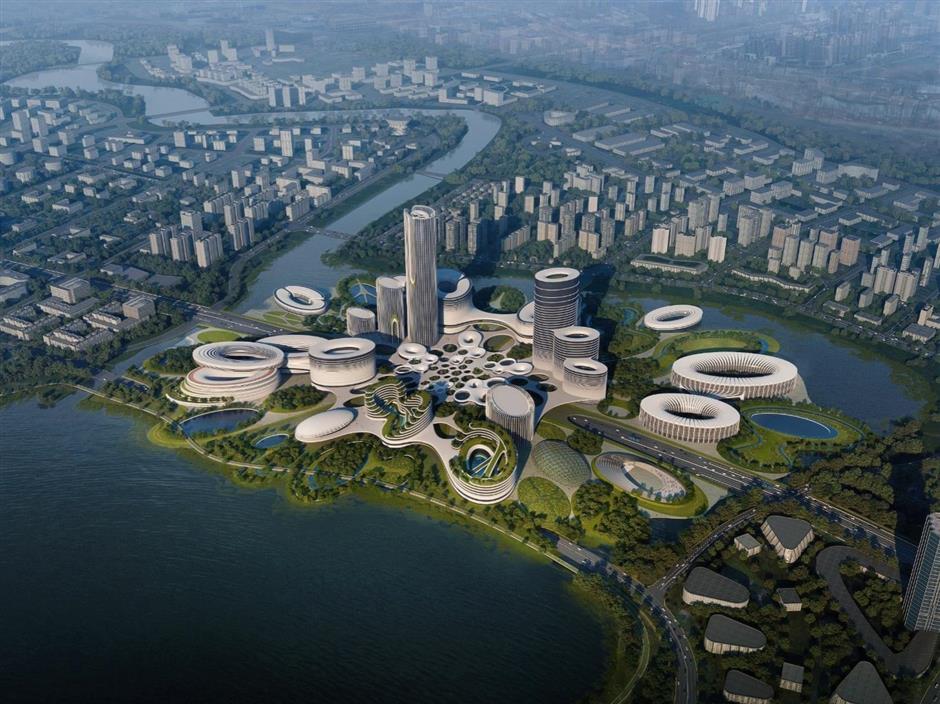