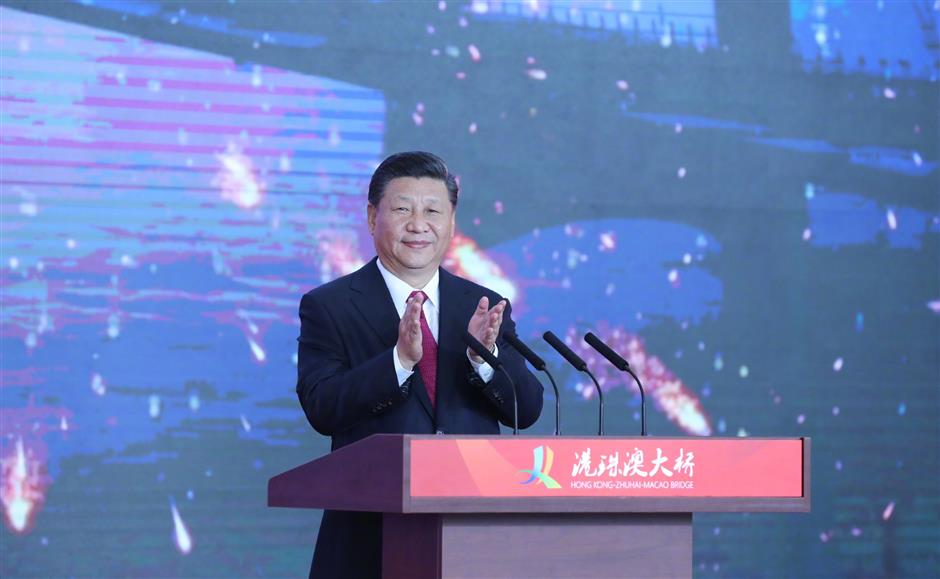 China's President Xi Jinping attends the opening ceremony of the Hong Kong-Zhuhai-Macao Bridge at the Zhuhai Port terminal on October 23, 2018.

President Xi Jinping on Tuesday announced the opening of the world's longest cross-sea bridge, which connects the mainland province of Guangdong with the country's two special administrative regions, Hong Kong and Macau.

Praising builders of the bridge for breaking a number of world records, Xi said they demonstrate the nation's spirit of striving to overcome any difficulties, the national strength, the innovative ability, and the aspiration to be the world's best.

The bridge should not only be structurally sound but also well managed, in a bid to contribute to the development of the Guangdong-Hong Kong-Macau Greater Bay Area, he said.

The Y-shaped construction spans over the Lingding Channel in south China meandering for 55 km. Built with an investment of 126.9 billion yuan (US$18.3 billion), the gigantic project consisting of a series of bridges, artificial islands and a tunnel facilitates travel that used to be separated by channels. 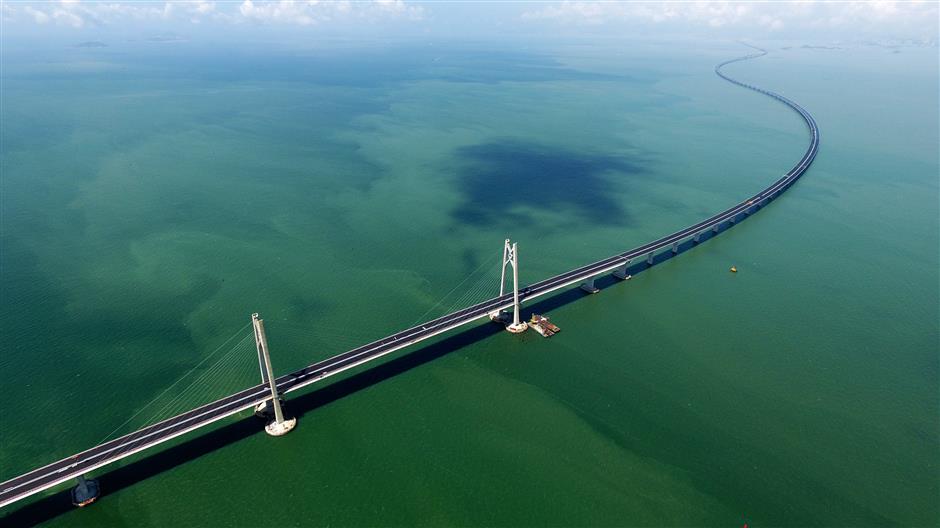 An aerial view of the Hong Kong-Zhuhai-Macau Bridge.

The mega-bridge has a 6.7-km underwater tunnel. It links the three economic heavy-weights that each have different social systems, economic structures and even languages.

With the swift journeys, the economic belt of the Guangdong-Hong Kong-Macau Greater Bay Area has taken shape and become an economic circle that can be completed in an hour, uniting Hong Kong's financial services, Guangdong's industrial manufacturing and Macao's entertainment industry.

Thirty-five years ago, Wu created a sketch of the bridge over the channel and made it a proposal to the then Hong Kong British authorities, but was ignored.

After Hong Kong returned to the motherland in 1997, entrepreneurs in Hong Kong brought up the proposal again, hoping to integrate development with the mainland.

"Without the bridge, people from Hong Kong facing Zhuhai across the Lingding Channel had to detour via several cities including Shenzhen and Dongguan in the bay area to reach Zhuhai and other cities in the western part of Guangdong," Wu said.

"The bridge construction is a practice of the Chinese policy of 'One Country, Two Systems,' as a great deal of coordinations were carried out under the three different legal and management systems," said Ge Changwei, head of the Guangdong Provincial Commission of Development and Reform.

Under coordination led by the National Development and Reform Commission, the three parties conquered difficulties ranging from financing, construction, and the bridge's ship passage designs to ecological protection, such as schemes for minimizing the impact of the bridge on the Chinese white dolphin, which is under first class state protection.

"With the bridge's opening, the Greater Bay Area with a population of 66 million people, 56,000 square km of coverage and a total GDP equivalent of US$1.3 trillion would spring to a new vitality," said Fang Zhou, director of the Hong Kong-based One-Country-Two-Systems Research Institute.

When delivering her policy address earlier this month, Chief Executive of the Hong Kong Special Administrative Region Carrie Lam said that the commissioning of the Hong Kong-Zhuhai-Macao Bridge would improve Lantau, HK's largest outlying island, to a "Double Gateway" to the world and other cities in the Guangdong-Hong Kong-Macau Greater Bay Area, as it was the landing point of both the bridge and HK's International Airport.

She said the HKSAR would seize the opportunities brought by the Belt and Road Initiative and the Guangdong-Hong Kong-Macau Greater Bay Area development, with a view to generate new impetus for the HKSAR economy. 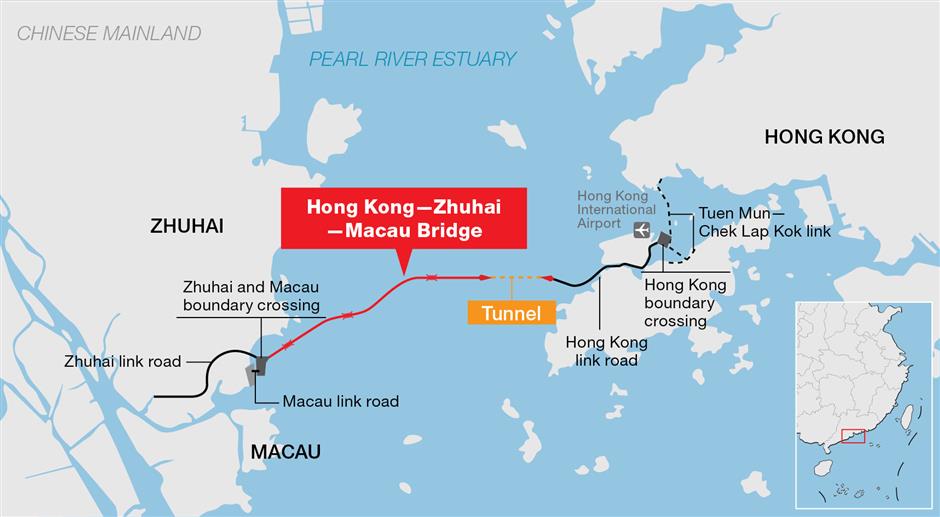 The mega-bridge construction incorporates the world's latest engineering technology and design. A total of 420,000 tons of steel was used in the project, equivalent to 60-times the steel used to build the Eiffel Tower. The bridge is designed for a 120-year lifespan, while most big sea bridges are designed to last 100 years.

The bridge underwent a natural test when super typhoon Mangkhut landed on September 16 with hurricane-force winds on the coast of the city of Jiangmen neighboring Zhuhai in Guangdong.

The Hong Kong-Zhuhai-Macao Bridge Authority dispatched 83 safety inspectors to patrol the bridge and supporting facilities after the typhoon's landing. On-site supervision data showed that the bridge withstood a maximum wind speed of 160 km per hour upon the landing of Mangkhut, one of the 10 biggest storms in southeast China since 1949.

Zhang Jinwen, chief inspector of the Hong Kong-Zhuhai-Macao Bridge Authority, said the bridge was built like building blocks. From the immersed tube tunnel of the underwater sections, to bridge piers and filter covers, every component was churned out on production lines similar to automobile workshops, and fitted into place.

The bridge has become a new landmark in the Greater Bay Area. Meng Fanchao, chief designer of the bridge, said the Qingzhou Channel Bridge, the highest part of the mega-bridge was designed in the shape of an auspicious Chinese knot.

Luo Guocai, a bridge builder, said it was part of his work to report on finding white dolphins in the nearby sea areas.

During the nine-year bridge construction period, a total of 2,367 sightings of dolphins were reported, with no injuries of any dolphins reported. Local fishermen said the building of the bridge did not cause a large impact on the life of the mammals.

Traffic over the bridge

With the bridge officially open to public traffic Wednesday, a coach service will link the three destinations. A bus starting from the Hong Kong Boundary Crossing Facilities can reach Zhuhai in about 40 minutes.

According to the Hong Kong-Zhuhai-Macao Bridge Authority, in the first year of the bridge's opening, there will be 200 coaches in service on the bridge. Among them, 150 will be run between Zhuhai and Hong Kong, and the remaining 50 will be en route to Hong Kong and Macau. The frequency of shuttle bus service between Hong Kong customs and Zhuhai can reach once every five minutes at busy times.

In the first three years of the bridge's opening, 250 taxi licenses will be issued for travel over the bridge. Among them, 150 will be in service between Zhuhai and Hong Kong. Special bridge traffic licenses will also be issued to private cars in quota systems in the three regions.