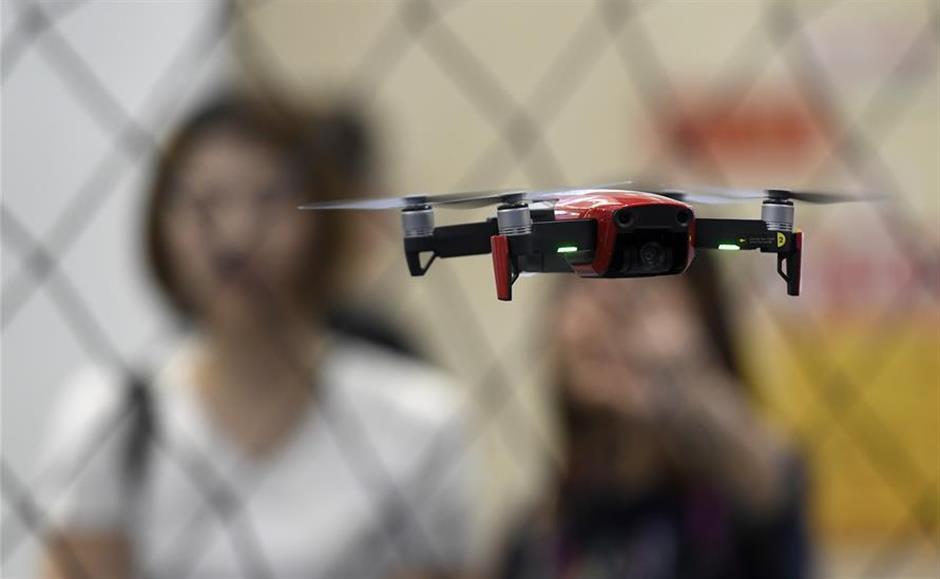 Visitors watch the performance of a drone during the Third World Intelligence Congress held in Tianjin, north China, May 16, 2019.

On a stage, a grey human-sized robot named Titan sang the theme song of "The Transformers" with moving lips while dancing to the tune, setting the audience on fire.

It's hard not to get emotional seeing the android rocking the beats dedicated to a fictional alien robot species, even for many of the cool-minded policymakers, researchers and entrepreneurs among the audience.

They are at the ongoing World Intelligence Congress in the northern Chinese city of Tianjin to explore the future of artificial intelligence (AI), the technology that powers robots like Titan.

The WIC displays the progress, prospects and opportunities in the field of AI in China, as well as the common concerns faced by humanity as we advance to a future that is expected to be powered by AI.

China sees AI as an innovation focus that will spark technological breakthroughs.

In July 2017, China issued a plan on new generation AI, according to which the industry should be a major new growth engine and have improved people's lives by 2020. It also set the goal of China becoming a major center and world leader in AI innovation by 2030.

"With the increasing presence of AI in people's lives, I think we have entered a time that companies can cash in on AI technology in 2019," said Liu Qingfeng, chairman of voice-recognition giant iFlytek at WIC.

Other big Chinese tech names are also leading AI developments, with Baidu in automated driving, Alibaba in AI cities, and Tencent in smart medicine and health.

The scale of China's core AI industry reached 68.6 billion yuan (about 10 billion U.S. dollars) in 2018, up by over 75 percent year on year, according to Chinese Institute of Electronics.

Industrial policies and investments have also fueled the surge.

According to Economic Information Daily, over 20 provinces in the country had released policies supporting the AI industry by the end of 2018. The sector received over 131 billion yuan of investments last year, up by 107 percent, according to a report from market researcher iiMedia Research.

In an automated future with sensor-loaded factories, cars and super intelligent computers, what should we do if man and computer make different choices in distress? Zhou Hongyi, chairman of online security company Qihoo 360, posed the question at WIC.

Although the conflict between humans and machines has long been discussed, new challenges keep emerging.

Zhou cited another example of AI-generated fake videos, adding that seeing is believing might no longer be true in the future.

"The technology surely develops faster than social ethics and legislation can keep up," Zhou said.

It is a global concern. In April, the EU published a set of guidelines on how companies and governments should develop ethical applications of AI. On Tuesday, San Francisco became the first major U.S. city to prohibit facial recognition technology by government agencies.

Wan said that China should put security in the first priority when developing AI. It not only means ensuring the security of how the technology works, but also the security of personal data and privacy as well as people's lives.

"We should guarantee the security with clear rules and laws," Wan said.

In March, China's Ministry of Science and Technology set up a committee for AI governance. The committee is drafting a governance code for AI, which shall be released soon.

Institutions like Peking University are also starting to work in these fields, with an AI legal research center set up in 2017 and a prospective study on robot ethics standards published in 2018. Other universities across the country have also rolled out AI majors starting this year.

At the WIC, many companies display cars remotely controlled by an indoor console through the 5G network. Drivers can sit at the conference center in Tianjin but drive a car 100 km away in Beijing.

In the future, people could hop on a car without learning to drive and still be safe with an experienced driver assisting the process in real time, according to Lyu Dandan, a staff member with communication giant China Unicom at WIC.

AI may also allow for more inclusive social development. A pulse-taking machine, showcased by China Mobile at WIC, can relay pulse signals thousands of miles away through the 5G network.

The pulse is then simulated on a dummy hand that doctors can use for diagnosis. The technology could be used in remote or less developed areas for local patients to be diagnosed by top doctors in big cities, China Mobile staff said.

Raj Reddy, the winner of the Turing Award and a guest to WIC, also sees AI as a way to promote inclusive social growth by making it easier for the translation between English and less-spoken languages.

When machines learn these languages, Reddy believes, they become a powerful tool for more people to access the huge knowledge base offered in the English language. He thinks China can have a role to play in this vision.

"China has shown the ability to leapfrog and create a new space where they have become the dominant player in the world," said Reddy, "and, in this respect, the technology is there."