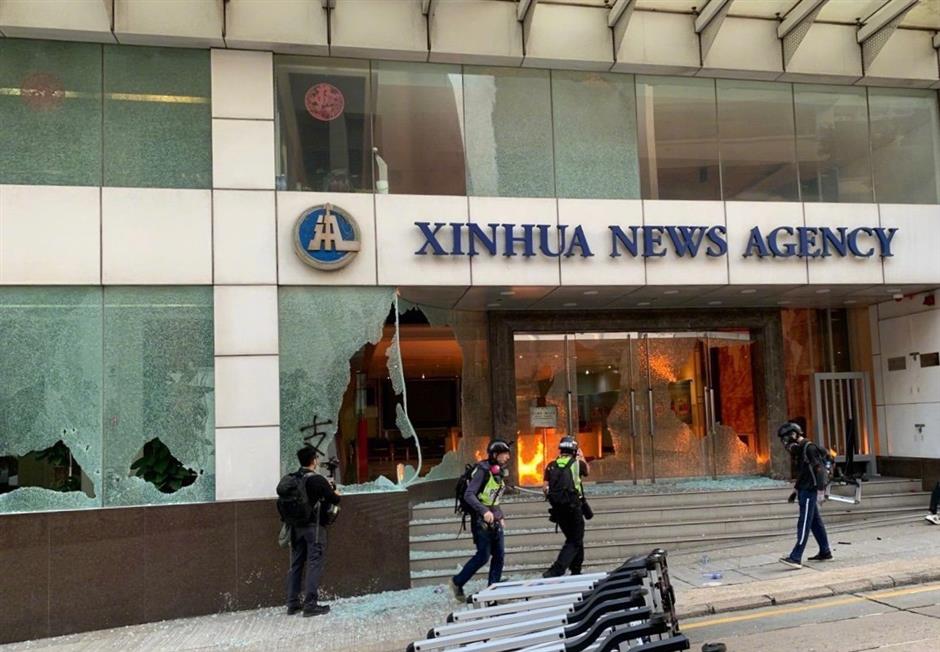 Cheung visited on Monday morning the office building of Xinhua News Agency's Asia-Pacific Regional Bureau, which was vandalized and set fire to by a group of black-clad, masked rioters on Saturday.

Cheung said the rioters' acts of vandalism against Xinhua's office in Hong Kong have exceeded the bottom line of the rule of law, civilization and freedom, and have hurt the feelings of people all over the country.

"Their acts are unacceptable. We express strong condemnation of these acts," Cheung said.

During the vandalism on Saturday afternoon, which lasted for about 10 minutes, the rioters dismantled security facilities at the entrance of the office building, smashed the glass doors and windows, and hurled firebombs and paint bombs into the lobby.

The incident once again shows that to end violence and chaos is the top priority for Hong Kong at the moment, Cheung pointed out.

He added that the HKSAR government has mobilized its departments to do their utmost to jointly stop violence and control chaos, with a hope of restoring stability to Hong Kong as soon as possible.

The HKSAR government has also launched dialogues with various sectors in the community and started to address deep-seated problems in Hong Kong, so as to turn the crisis into an opportunity and lead Hong Kong out of the impasse, Cheung said.

He reiterated that with the support of the whole country and the joint efforts of all concerned parties, Hong Kong has the confidence and ability to overcome the current difficulties.

HKSAR Chief Executive Carrie Lam is visiting Shanghai and will attend the opening ceremony of the second China International Import Expo on Tuesday. During her absence, Cheung, the chief secretary for administration of the HKSAR government, plays the role as the acting chief executive.