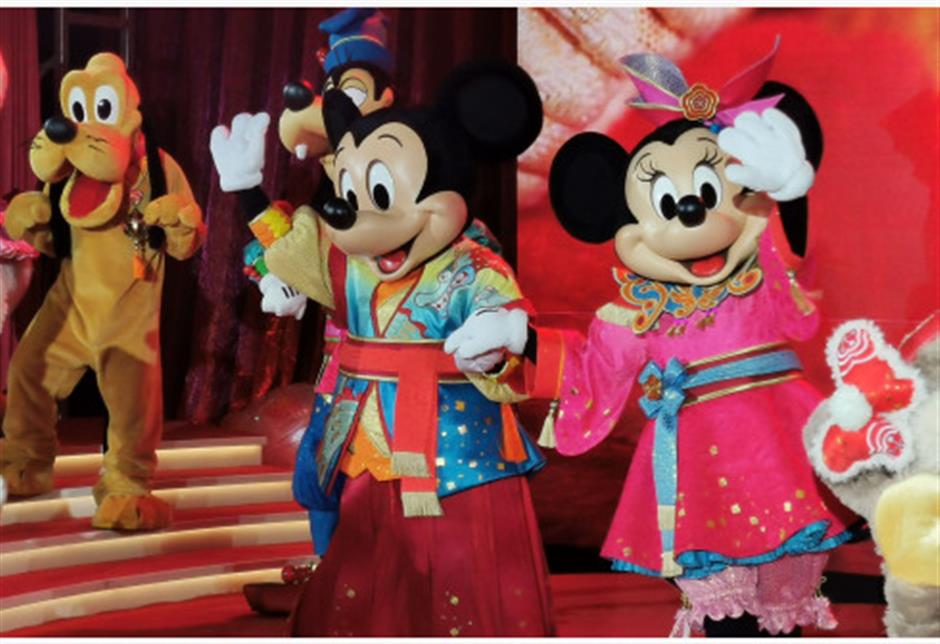 Mickey and Minnie dressed in customs designed for the coming Chinese New Year pose for photos at Shanghai Disney Resort on January 9.

Mickey and Minnie, perhaps the most popular and beloved mice in the world, are expected to have the busiest year of their career in China.

At Shanghai Disney Resort, the iconic American duo will meet the public by putting on costumes in red and gold, the traditional Chinese Lunar New Year's colors, to celebrate the Year of the Rat, which comes around once every 12 years.

Rat is the first among the 12 animals of the ancient Chinese zodiac. In Chinese culture, they are a symbol of intelligence, fertility, affluence and agility.

Despite numerous legends, Luo Shuwei, a historian and researcher with the Tianjin Academy of Social Sciences, has his own understanding of why the rat comes first.

"Rats are most active between 11pm and 1am, which marks the beginning of a new day. Ancient Chinese had good reason to put them in the first place of the cycle," Luo said.

The "rat killer" has caught nearly 10,000 rats over the years by analyzing their types, habits and reproductive cycle and enhancing new control technologies.

Rats found themselves on the list of the "Four Harms" in China in the 1950s, as they damaged buildings and crops, and rat bites could lead to fatal contagious diseases. Even today, some places in China are still troubled by rats.

Thanks to population control efforts, the rat density in Guizhou decreased from 15 percent in the 1980s to 3 to 5 percent by the end of 2018, according to Yang.

While Yang is fighting rats in mountainous Guizhou, 24-year-old Wang Yuan is keeping a white hamster as a pet.

"For my parents who hate rats and hamsters, it's a jaw-dropping hobby. But I think they are lovely and quick-witted, and I hope my pet will be healthy and strong in the new year," said Wang, a Shanghai-based internet company employee.

Wang is among a growing number of young Chinese who are delving into the hobby of raising non-traditional pets. Among the more than 73.55 million pet owners in China, around 17.3 percent are raising rodents, such as rats and hamsters.

Behind the booming pet market is China's fast-growing spending power, with per capita disposable income having increased nearly 60 times to 28,228 yuan (US$4,096) in 2018 from that in 1949 when the People's Republic of China was founded.

Although many people still dislike rats which they consider shortsighted, cruel and selfish, Zhong Fulan, a folklore expert with East China Normal University, pointed out that people's attitudes have been gradually changing due to reasons such as improved sanitation in urban and rural areas and the impact of pop culture.

In the 1980s, the animated TV program "Mickey Mouse and Donald Duck" debuted in China. With its adorable look, playful character and optimistic attitude, the cute cartoon mouse has won the hearts of Chinese people across generations.

In the 2000s, a Chinese pop song "mice love rice" became a smash hit in China and other Asian countries thanks to its catchy lyrics, Zhong said.

2020 is the last year for China to secure a decisive victory in building a moderately prosperous society in all aspects, according to its ambitious plans. And rats, from the East and West alike, are also enjoying their heyday.

In the Disney store on Alibaba's Tmall shopping platform, a variety of goods including clothes, toys, backpacks and mugs featuring mice have gained popularity ahead of the Chinese Lunar New Year.

China's central bank has issued a series of commemorative coins for the Year of the Rat, with each set containing 10 gold and seven silver coins. Reservation orders were snapped up by customers immediately after the launch.

In southwest China's Chongqing Municipality, an exhibition shows more than 90 rat-themed cultural relics. Highlights include rat-shaped jade accessories and clothes made of rat fur from years past.

Spring Festival is a time of delectable meals, celebrations and family gatherings. As lanterns and rat-shaped decorations adorn the city streets, Chinese will embrace a brand new Year of the Rat featuring jubilation and vitality.