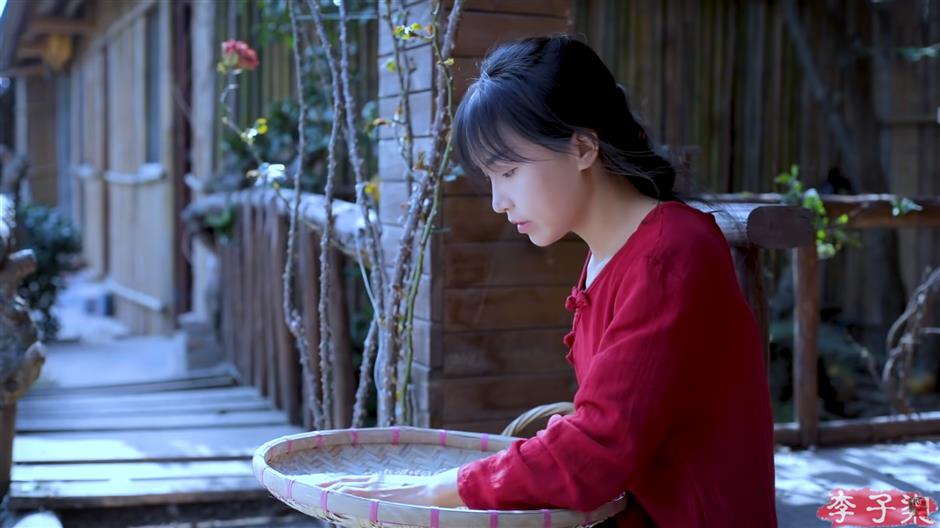 Li Ziqi in her latest video about peas.

This puts Li, who shot to fame with short videos recording her traditional and idyllic lifestyle in rural China, among the ranks of the most popular Chinese-language content creators on the platform.

“It’s really surprising. I didn’t expect such a wide response,” Li said, noting she was surprised by how foreign netizens were taken with her works.

“What I present is just a lifestyle I’ve long followed and appreciated,” she said. “Maybe it’s also what many other people have valued?”

Li’s YouTube videos center on her life with her grandmother in the rural parts of Sichuan Province. In the videos, Li, often dressed in graceful traditional garments, rises at sunrise, rests at sunset, plants seeds and harvests flowers, cooks Chinese dishes and crafts bamboo furniture.

Unlike many other food vloggers, Li’s videos set China’s countryside as the stage and start with how the foods are planted and harvested. She rarely speaks in the process.

Li’s overseas followers have hailed her videos for showing the amazingly picturesque, simple and elegant side of China’s rural life, but back home, many have wondered whether her presentation is unrealistically poetic.

In response, Li said she never needs a script or special arrangements when shooting a video about rural life as “everything is in my mind.”

Li said she leads a leisurely life, but not during the COVID-19 epidemic as she was busy arranging medical supplies to support small hospitals in remote areas.