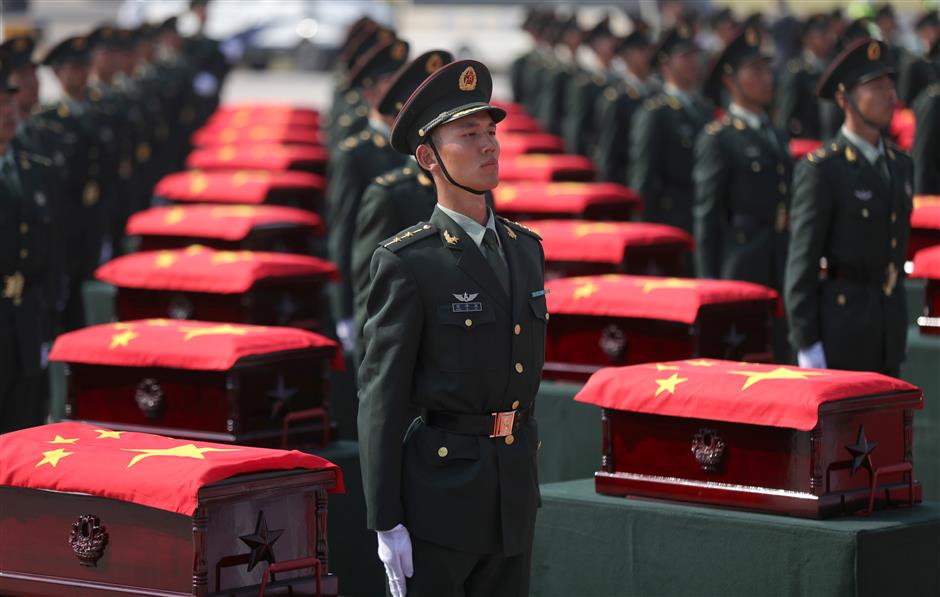 Caskets containing the remains of 117 Chinese soldiers killed in the 1950-53 Korean War are escorted by honor guards at the Taoxian international airport in Shenyang, northeast China's Liaoning Province, on Sunday.

The remains of 117 Chinese soldiers killed in the 1950-53 Korean War were returned to China yesterday from South Korea.

Escorted by two Chinese fighter jets, an air force plane carrying the remains and belongings of the fallen soldiers landed at Taoxian international airport in Shenyang, capital of northeast China’s Liaoning Province, at 11:18am.

Most of the 117 remains were found in the Demilitarized Zone that separates the two Koreas. It is the seventh annual repatriation following a handover agreement signed by the two countries, and the largest since the 437 returned in the first one in 2014. In all, the remains of 716 Chinese soldiers have been sent back.

This year’s return, originally planned for the spring, was postponed due to COVID-19.

Caskets containing the remains of 117 Chinese soldiers killed in the 1950-53 Korean War are escorted by honor guards at the Taoxian international airport in Shenyang, northeast China's Liaoning Province, on Sunday.

The remains were casketed in South Korea on Saturday at a ceremony held at a provisional morgue of the 17th army division of South Korea in Incheon, west of the capital Seoul.

At the repatriation ceremony held at Incheon airport, South Korean troops delivered the coffins to Chinese soldiers, and the Chinese ambassador to South Korea Xing Haiming covered the coffins with China’s national flag before they were carried onto the airplane.

Personal seals of three martyrs — Ma Shixian, Lin Shuishi and Ding Zuxi — were found in the belongings, providing clues for confirming the identities of the heroes and finding their relatives.

“Most of them are unknown martyrs. ‘Hero’ is their shared name,” Li Hanxiang, a veteran who fought in the Korean War, said at the Taoxian airport ceremony to welcome the martyrs home.

“My father was also a martyr in the Korean War. Seeing the remains of these soldiers return is like seeing my father,” said Zhu Jiangbo, who was also at the airport. “The motherland and the people will never forget them.”

Seventy years ago, the Chinese People’s Volunteers crossed the Yalu River and fought alongside the army of the Democratic People’s Republic of Korea against the South Korean and US-led UN forces, eventually winning the War to Resist US Aggression and Aid Korea in 1953. “Why did we win the war? Because we, brave soldiers fearing no sacrifice, were fighting for justice and peace,” said Wang Liping, an 89-year-old CPV veteran. 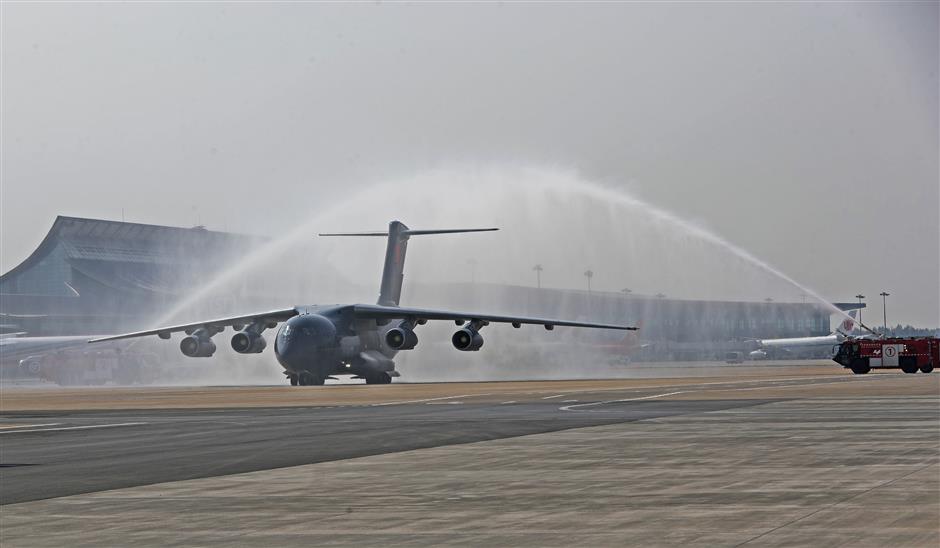 An air force plane carrying the remains and belongings of the fallen soldiers lands at the Taoxian international airport in Shenyang, capital of northeast China's Liaoning Province, on Sunday.

A total of 2.9 million CPV soldiers entered the battlefield, and 197,653 of them sacrificed their lives in the war. The names of the martyrs can be found on a memorial wall at the CPV martyrs’ cemetery in Shenyang.

“We never thought of coming back. Every soldier was determined to defend the country with their life. Today, they finally returned home,” said 88-year-old Li Weibo, who operated anti-aircraft artillery during the war.

The remains will be buried in the martyrs’ cemetery, with a burial ceremony due to be held today. The remains of 599 soldiers sent back from South Korea have been buried there between 2014 and 2019.

Cemetery staff have registered more than 5,000 items that were returned together with the previous six groups of remains, and have established electronic files.

In 2019, with the help of DNA technology, China successfully identified six of the unknown martyrs and found their families. “The great spirit of CPV soldiers is the precious wealth of the Chinese people. Heroes will never die but always live in the hearts of the motherland and the people,” said Liu Kai, son of CPV martyr Liu Tianzeng.