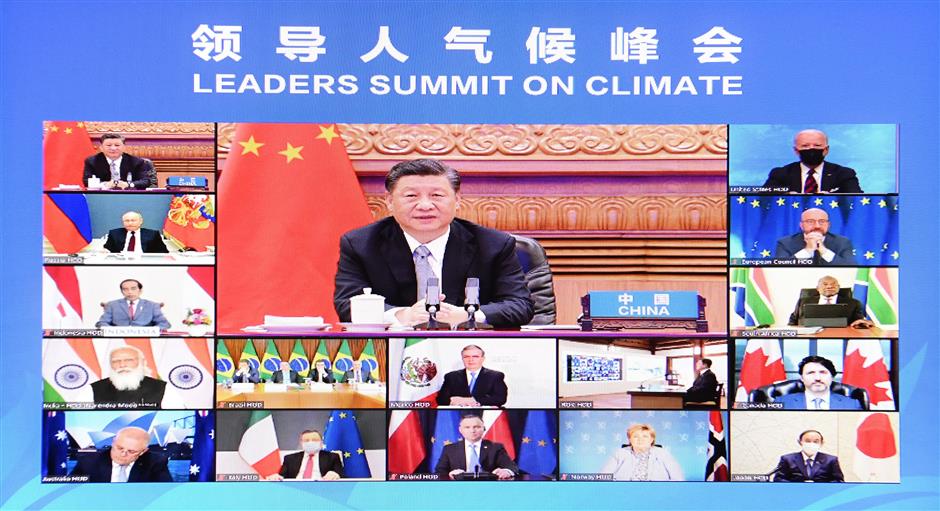 China will start to phase down coal consumption over the 2026-2030 period as part of its efforts to reduce climate-warming greenhouse gas emissions, President Xi Jinping told the Climate Leaders’ Summit on Thursday.

Xi reiterated the pledge made last year that China would bring its emissions to a peak before 2030 and become carbon neutral by 2060.

“China has committed to move from carbon peak to carbon neutrality in a much shorter time span than what might take many developed countries, and that requires extraordinarily hard efforts from China,” he said.

“This major strategic decision is made based on our sense of responsibility to build a community with a shared future for mankind and our own need to secure sustainable development,” Xi said.

China has decided to accept the Kigali Amendment to the Montreal Protocol and tighten regulations over non-carbon dioxide emissions, Xi noted, adding that a national carbon market will start trading.

Stressing the targets of carbon peak and carbon neutrality have been added to China’s overall plan for ecological conservation, Xi said the country is making an action plan and taking strong nationwide actions toward carbon peak.

China’s energy regulator said earlier on Thursday that it would aim to reduce the share of coal in its total energy mix to less than 56 percent this year.

Xi said China welcomes the return of the United States to the multilateral governance on climate change.

Noting that not long ago, the Chinese and US sides released a Joint Statement Addressing the Climate Crisis, Xi said that China looks forward to working with the international community, including the United States, to jointly advance global environmental governance.

Xi called on developed countries to refrain from creating green trade barriers, so as to help developing countries accelerate the transition to green and low-carbon development.

He stressed that countries should honor their commitments to addressing climate change instead of going back on promises.

“We need to work on the basis of international law, follow the principle of equity and justice, and focus on effective actions.”