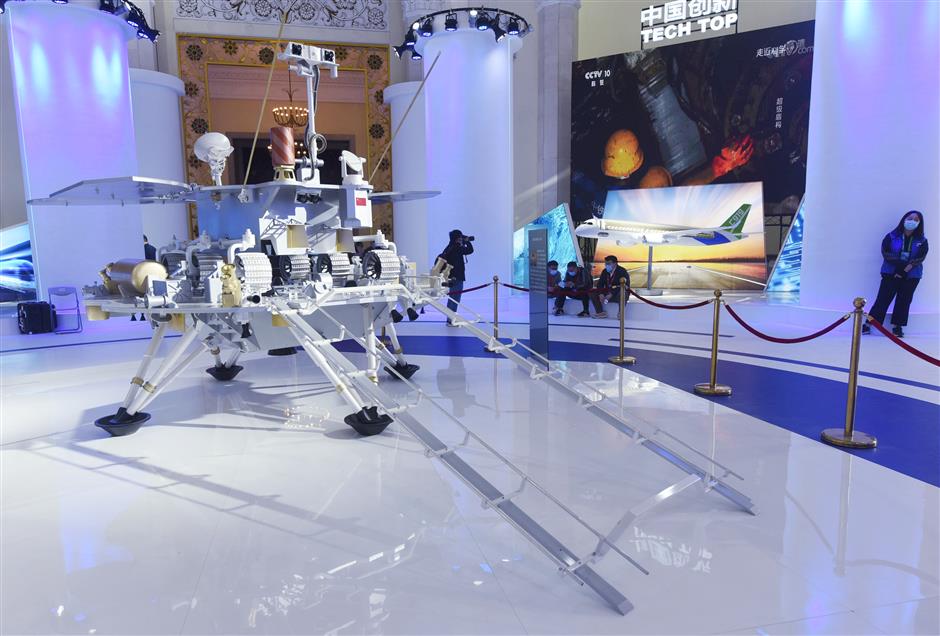 A model of the Mars rover Zhurong is displayed at the Inno-match Expo in Shanghai on October 30, 2020.

Zhurong is the god of fire in ancient Chinese mythology, which echoes with the Chinese name of the red planet, Huoxing (meaning the planet of fire).

Fire brought warmth and brightness to the ancestors of humankind, and fire lit up human civilization. Naming China's first Mars rover after the god of fire signifies igniting the flame of China's planetary exploration, according to Wu Yanhua, deputy director of the CNSA.

Literally, Zhu (meaning wish) expresses the good wishes for humankind's exploration of the universe. Rong (meaning integration and cooperation) reflects China's vision of the peaceful use of space and the building of a community with a shared future for humanity, Wu said.

The name is another example of Chinese aerospace workers' scientific romance as they have named spacecraft, including Tianwen, Chang'e and Beidou, after Chinese traditional culture, which also shows the Chinese people's spirit of exploration and cultural confidence, he said.

China launched its Mars probe, Tianwen-1, on July 23, 2020. The spacecraft, consisting of an orbiter, a lander and a rover, entered the parking orbit of Mars on February 24.

The most challenging part of the mission will be the soft landing in May, an autonomous process of the probe lasting seven to eight minutes. The probe will use its aerodynamic shape, parachute and retrorocket to decelerate and buffer legs to touch down, according to the CNSA.

Chinese space engineers and scientists have chosen a relatively flat region in the southern part of the Utopia Planitia, a large plain, as the potential landing zone.

Earlier research showed the potential landing site might be the edge of an ancient ocean or lake in the early history of Mars. Chinese scientists are looking forward to finding more evidence of water-ice.

The scientific goals of Tianwen-1 include mapping the morphology and geological structure, investigating surface soil characteristics and water-ice distribution, analyzing the surface material composition, measuring the ionosphere and the characteristics of the Martian climate and environment at the surface and perceiving the physical fields and internal structure of Mars.

The global campaign of naming the rover kicked off last July. Netizens at home and abroad were invited to vote for their favorite among 10 candidates from January 20 to February 28.

The various activities on Space Day have become a window for the Chinese public and the world to better understand China's aerospace progress.