Zhu Mingjun, a 28-year-old gaming livestreamer on bilibili.com who has a high level of paralysis, has found his calling in helping people as a psychological consultant.

In 2013, fate seemed to have pulled a cruel practical joke on Zhu.

Back then, Zhu was a 21-year-old firefighter who had been enlisted for 2 years. Zhu was a military training officer at a university when the accident happened.

Pictures of Zhu when he was a firefighter.

At the end of one day's training, Zhu was showing his students a spinning move on a two-meter tall horizontal bar, which he had done thousands of times. However, he fell to the ground, neck first.

A doctor later told him he had a high-level spinal cord injury and would become a quadriplegic, which meant he would not be able to move his body from the neck down.

For the first three years, Zhu could not speak and he had to rely on a respirator to breathe. The only body part he could move was his head. He received mushed food through nasal feeding tube.

Zhu has to breathe through a respirator.

"I really had a hard time accepting the role change from a life-saving firefighter to total dependent, who have to rely on others for eating and even bowel movements," he said.

The thought of ending his life flashed in his head many times. He tried to bite his tongue off once but a nurse found blood dripping off his mouth while patrolling and saved him. By request from Zhu's family, the hospital put on some sort of a gag to his mouth.

"I deeply wallowed in despair and pain," Zhu said. "Why won't my family just give up on me and why did they allow me to live painfully? The more I questioned myself, the more pointless I found these questions to be."

"My mom would just cry a lot, and so did I. I knew she wouldn't turn off my respirator no matter how many times I asked her," he added.

Zhu tried to seek comfort from internet forums where cancer and quadriplegic patients would gather and he sought ways to recuperate.

One day in 2016 he came across a psychological consultant surnamed Wang, who comforted Zhu not by saying "you'll get better" or "it's a bliss that you are still living."

Instead, Wang empathized with him and encouraged him to learn about psychology so that he might change his state of mind.

Zhu started to study psychological courses and he started to make peace with his reality.

Now he faced a choice: whether to stay in the hospital where it's relatively safe or go home, risking his life to do want he really wants to do. As he relies on a respirator, going outside of the hospital meant the risks were higher.

The concerns for his life are not without reason. One time his phlegm caught in the tubes of his respirator and that almost cost his life, and another time his mother forgot to take a back-up battery for his respirator when they were on an outing.

Zhu wanted to become a psychological consultant for local schools, which turned out to be impossible because of his disability.

Still, he wanted to connect with other people in a meaningful way, so he mustered enough courage to let his family help him go to a local square to give public speeches. 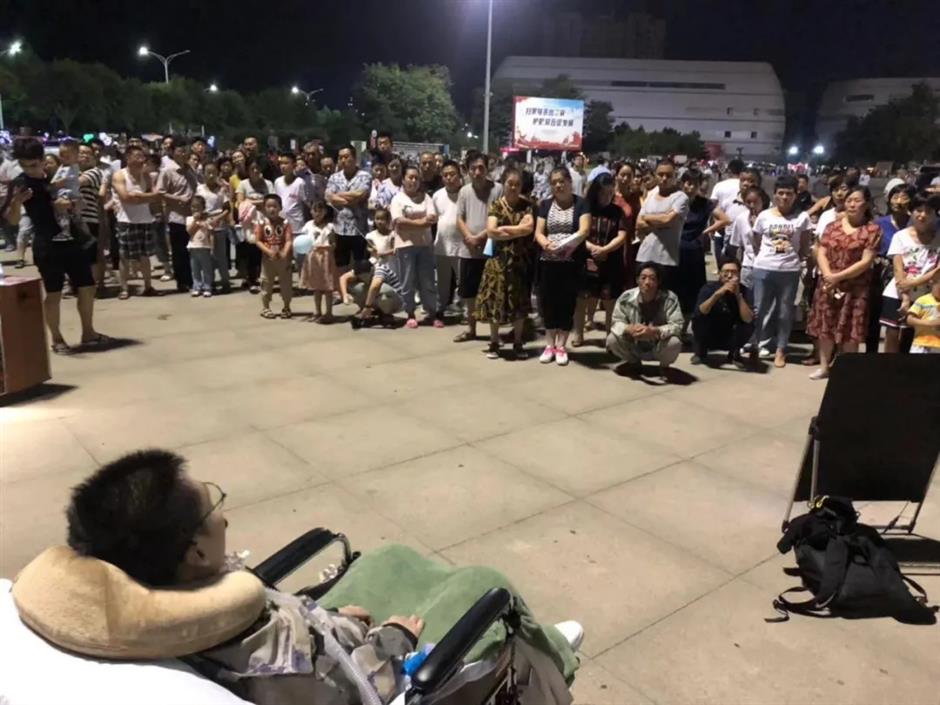 Zhu gives a speech in a public square.

It had been five years since Zhu was outside. At first, Zhu could barely say anything he was so nervous and people thought he was begging for money and would offer him some change.

As time went by, when giving speeches, he found that some people in the audience were looking at him not out of curiosity or sympathy, but rather empathy. He knew that they were also going through a tough time in their lives.

That's how Zhu landed his first client, a young man who was so obsessed with death he was basically was just cooped up in his home.

As they communicated Zhu found the man might have been suffering from severe depression and suggested he go to a hospital and take medication.

"We also help ourselves when helping others," Zhu said.

He reminds himself of the saying from time to time whenever he feels that he's not strong enough to go on.

Whenever there's a visitor seeking consultancy at his home, his mother prepares him to sit upright in his wheelchair with two pillows under his waist to look more professional.

One recent client was a girl with a shining resume who graduated from a top university in China, Zhu recalled, who's also very pretty. But a series of bad events just kept happening to her, an unsatisfying marriage on top of a recent injury that left her unable to walk. Zhu gives a psychological consultancy to one of his clients at home.

"My body condition makes it easier to empathize with the pain of my clients, so I never shy away from talking about my own suffering and story," Zhu said.

"Now I can recount my own experience in a more light-hearted way."

Zhu said he thought psychological consultancy works in both ways as it heals his patients and himself.

In the evening, he would also livestream games he enjoy with his follower, such as "Genshin Impact" and "League of Legends."

One day in August, Bilibili contacted Zimujun (字幕君), a DIYer who helps others to put up their ideal gaming or daily desk, and they wanted to see if he could put up a gaming/nursing bed for Zhu.

Zimujun noted Zhu's computer was rather outdated and the safety racks his family put up were unsafe.

He had no idea how to put up such a contraption for the physically-challenged.

He came up with an initial design but soon he found out that the racks wouldn't fit into the all ready tight space of Zhu's room. Zhu's mom also needed to live in the same room to take care of him. The old setup Zhu used for gaming and livestreaming.

The initial prototype of the gaming bed that didn't work as it took too much space.

Seeking inspiration for a new design, Zimujun looked to gaming workstations with tilt display holders, then he sought help from his followers. Zhou Jianze, an entrepreneur in China who designs and produces gaming workstations, contacted Zimujun and expressed his wish to design the bed for Zhu.

The bed would be China's first gaming/nursing workstation, meaning they have to design it from scratch.

The station needed to have enough room for a respirator, oxygenerator, humidifier, and electric pneumatic pump for the mattress, as well as extra racks for Zhu's Quadstick inputing device. They also included a foldable tray table to make it easier for Zhu's mom when feeding him.

After a few months' work, Zhu finally saw the gaming bed for the first time. 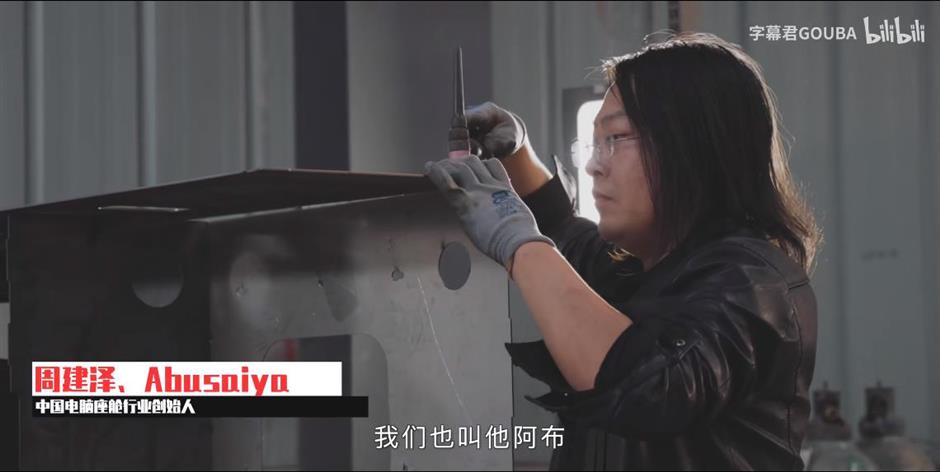 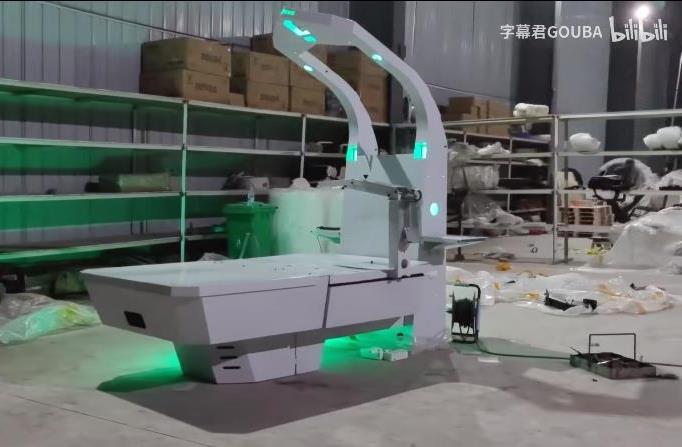 The gaming/nursing bed is China's first of its kind.

Not only did they design the gaming bed, they also refurbished the whole room and added new furniture as well.

"From a market point of view, the product seems to be very niche and is very low on market value," Zhou said. "All our efforts that went into designing the gaming/nursing workstation were just something we wanted to do for this former fireman." 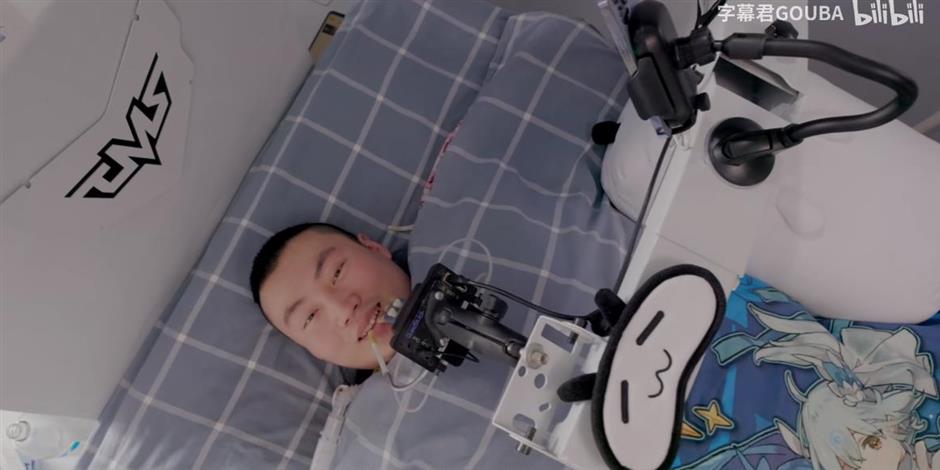 "Technology has really changed my life for the better," Zhu said.