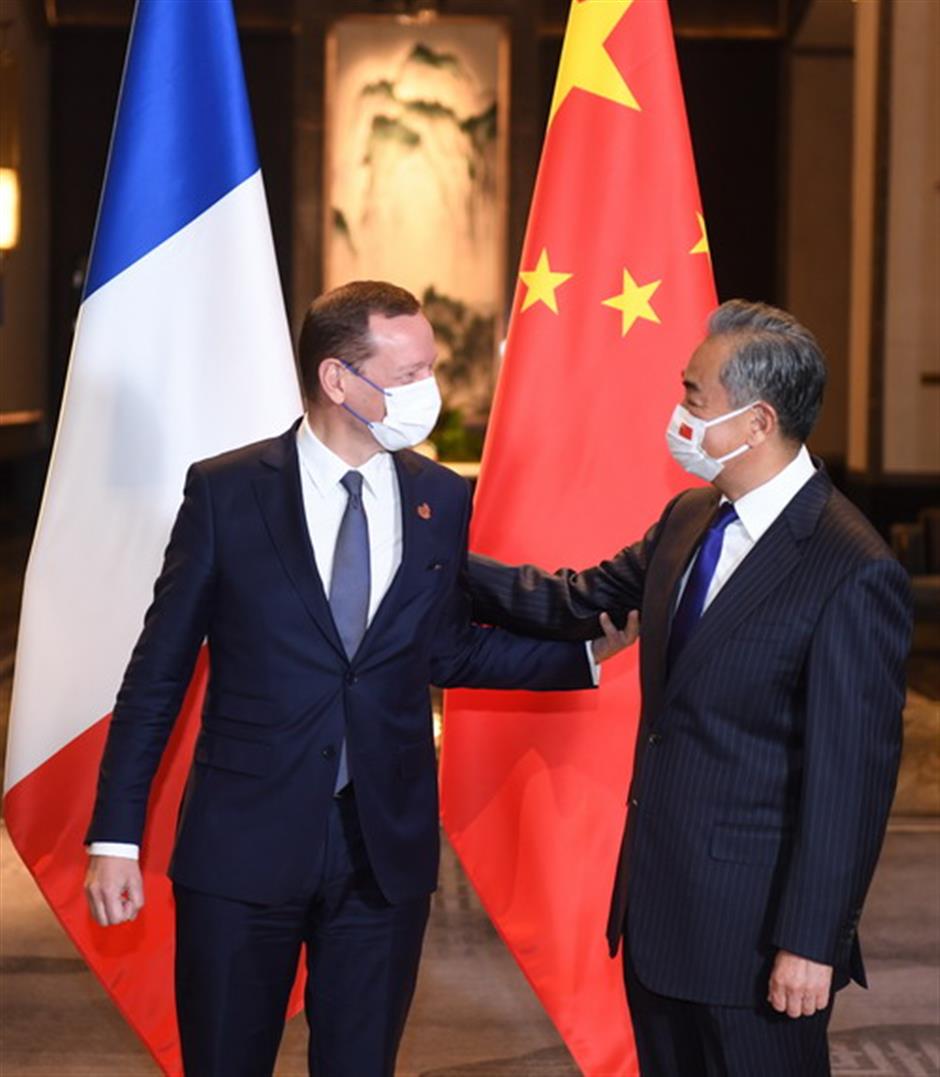 The two sides had long and in-depth communication and candid exchanges, and both expressed the willingness to further give play to the strategic leading role of head-of-state diplomacy, highlight the pillar role of practical cooperation in bilateral relations, and leverage the exemplary role of China-France relations in China-EU relations to promote the sound and steady development of both China-France and China-EU relations.

Wang said China and France, as permanent members of the UN Security Council, shoulder important international responsibilities. The two countries should adhere to the independent diplomatic tradition, enhance mutual trust through dialogue and consultation, and deepen cooperation in the spirit of mutual benefit and win-win, to make a good start for China-France relations and China-EU relations.

Bonne said France and China play a vital role in promoting peace and security. He said he expected that the two countries would jointly implement the consensus reached and ambitious goals set by the two heads of state to achieve mutual benefit and win-win results.

They agreed to continue to promote cooperation on aviation, aerospace, agricultural and food products, nuclear energy, third-party markets, as well as green and digital fields, and explore cooperation on big data and cloud computing.

Bonne said that the French side advocates adhering to the Olympic spirit and opposes the politicization of sports, and French athletes look forward to participating in the Beijing Winter Olympics.

Wang said the stable development of China-EU relations conforms to the fundamental and long-term interests of Europe. China has always believed that Europe, as an independent force, is an important part of multi-polarization.

"China supports the European integration, supports the EU's development and growth, and supports EU playing a greater role in the international arena. No matter whether China-EU relations are in good times or encounter setbacks, this policy will not change," Wang said, adding that it is hoped that the EU will continue to adhere to a positive and practical policy toward China.

Bonne said Europe will continue to adhere to its strategic independence, and Europe and China should further enhance mutual trust, advance cooperation, and continue to be high-standard cooperation partners. The French side will abide by the one-China principle.

The two sides also exchanged views on pandemic response and improvement of global governance. They also had in-depth discussion and coordinated propositions on issues of Iranian nuclear, Afghanistan and Myanmar.