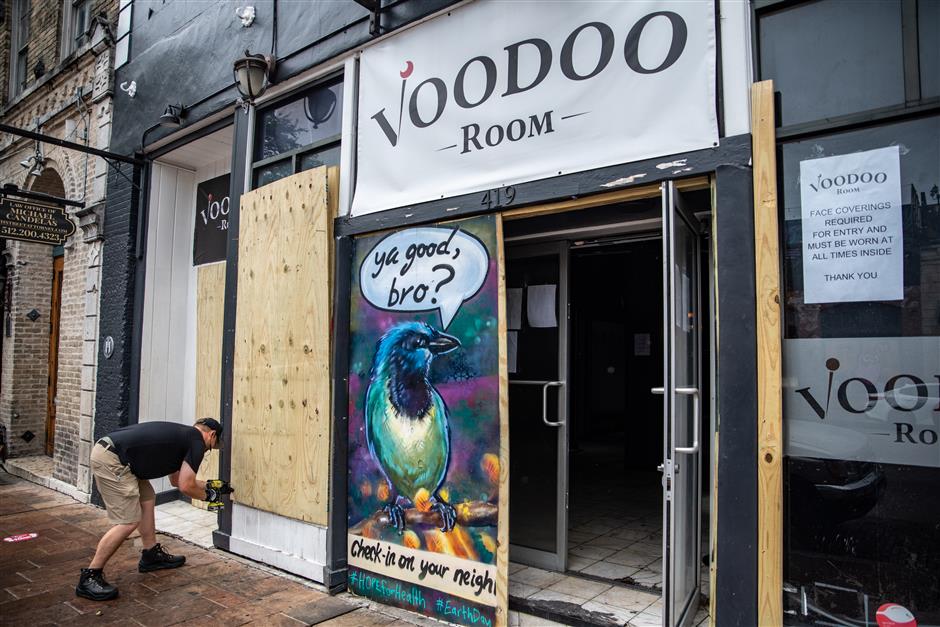 A worker drills a piece of plywood onto the facade of the Voodoo Room bar in Austin, Texas, June 26, 2020. Texas Governor Greg Abbott ordered bars to be closed by noon on June 26 and for restaurants to be reduced to 50 percent occupancy.

Washington State Governor Jay Inslee on Saturday announced the suspension of all applications from counties looking to move into Phase 4 of reopening with new COVID-19 cases rising across the state.

"We all want to get back to doing all the things we love in Washington during the summer, and fully open our economy, but we aren't there yet," Inslee said in a news release. "This is an evolving situation and we will continue to make decisions based on the data."

Inslee's state is taking a phased approach to reopening, allowing some counties to reopen before others.

Phase 4 would resume recreational activities and allow for gatherings of more than 50 people, according to the state's "Safe Start" plan.

The northwestern US state is the latest to backpedal on reopening policies due to rising COVID-19 cases and growing concern about the virus's spread across the country.

A total of 12 states — Arizona, Arkansas, Delaware, Florida, Idaho, Louisiana, Maine, Nevada, New Mexico, North Carolina, Texas and Washington — have rolled back or paused reopening plans, according to a tally by CNN on Saturday.

More than 42,000 new cases have been reported nationwide as of late Saturday afternoon, the second day in a row that the daily increase in cases has risen above 40,000, said a report by The Washington Post.

The number of COVID-19 cases in the United States has topped 2.5 million on Saturday with over 125,000 deaths, showed data by the Center for Systems Science and Engineering at Johns Hopkins University.

The state of New York reported 391,923 cases and 31,362 deaths, both topping the nation. But the state's COVID-19 test positivity rate has dropped to around 1 percent, the lowest among the country's big states, according to New York Governor Andrew Cuomo.

For the third time in the four days, Florida set a new daily record for novel coronavirus cases with more than 9,500 confirmed on Saturday.

The 9,585 new COVID-19 cases brought the state's total to 132,545, according to figures released by the Florida Department of Health.

The Department of Health Services of Arizona reported 3,591 new cases Saturday morning, pushing the tally in the western state to 70,051.

The new lab-confirmed cases number, which jumped by 5.4 percent from the previous 24 hours, exposed part of the worrisome landscape that Arizona is facing to contain the pandemic.

Texas also set a record for coronavirus-related hospitalizations for the 16th consecutive day on Saturday, with 5,523 patients currently being treated, reported The Washington Post. Hospitalizations have risen rapidly since Memorial Day, when there were 1,511 COVID-19 patients in the state's hospitals.

Increasing gatherings and lack of social distancing amid reopening nationwide have led to the new surge in coronavirus cases in the United States, Zhang Zuofeng, a professor of epidemiology and associate dean for research at School of Public Health, University of California, Los Angeles, told Xinhua on Thursday.

"It's possible to lift restrictions slowly and safely, and a few states are meeting the benchmarks that experts recommend to do that. But most never fully controlled their outbreaks, instead forging ahead with reopening," wrote German Lopez, a correspondent, in a story on Saturday posted by news website Vox.

"A mix of carelessness and partisanship is to blame. Under Trump, the federal government and some states appeared to prioritize the economy over public health, voicing discontent with the restrictions ... Mask-wearing became a politicized issue, and segments of the population rejected face coverings and other precautions against COVID-19," said Lopez.