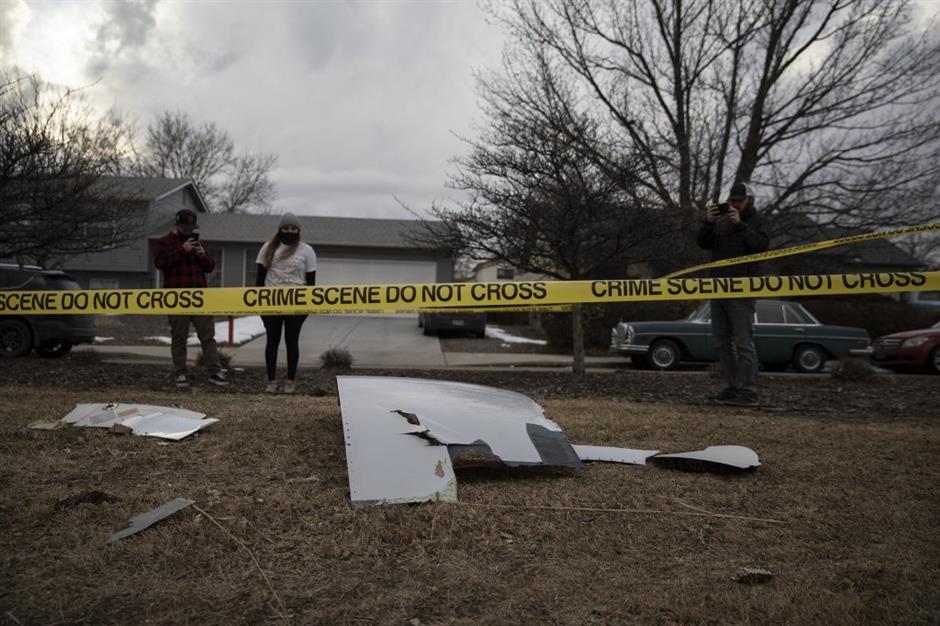 Residents take pictures of debris fallen from a United Airlines airplane's engine on the neighborhood of Broomfield, outside Denver, Colorado, on February 20, 2021 A United Airlines flight suffered a fiery engine failure February 20, shortly after taking off from Denver on its way to Hawaii, dropping massive debris on a residential area before a safe emergency landing, officials said.

United Airlines said Sunday that it was grounding 24 of its Boeing 777 airplanes after the US Federal Aviation Administration (FAA) issued an emergency directive following an engine failure on one of the flights.

A Boeing 777-200 airplane from Denver, capital of Colorado, to Honolulu suffered an engine issue shortly after takeoff on Saturday afternoon. It turned around and made a safe emergency landing at Denver International Airport, with no injuries of all the 241 people on board.

In a statement on Sunday, head of the FAA Steve Dickson said the agency will issue an emergency order and require stepped-up inspections of Boeing 777 flights with Pratt & Whitney PW4000 engines.

"We reviewed all available safety data following yesterday's incident," Dickson said. "Based on the initial information, we concluded that the inspection interval should be stepped up for the hollow fan blades that are unique to this model of engine, used solely on Boeing 777 airplanes," he added.

The Chicago-headquartered airline company said it will continue to work closely with US authorities to "determine any additional steps that are needed to ensure these aircraft meet our rigorous safety standards and can return to service."

The flight 328 had 231 passengers and 10 crew members on board. Debris falling from the burning right engine was scattered across three nearby neighborhoods, causing no injuries on the ground.