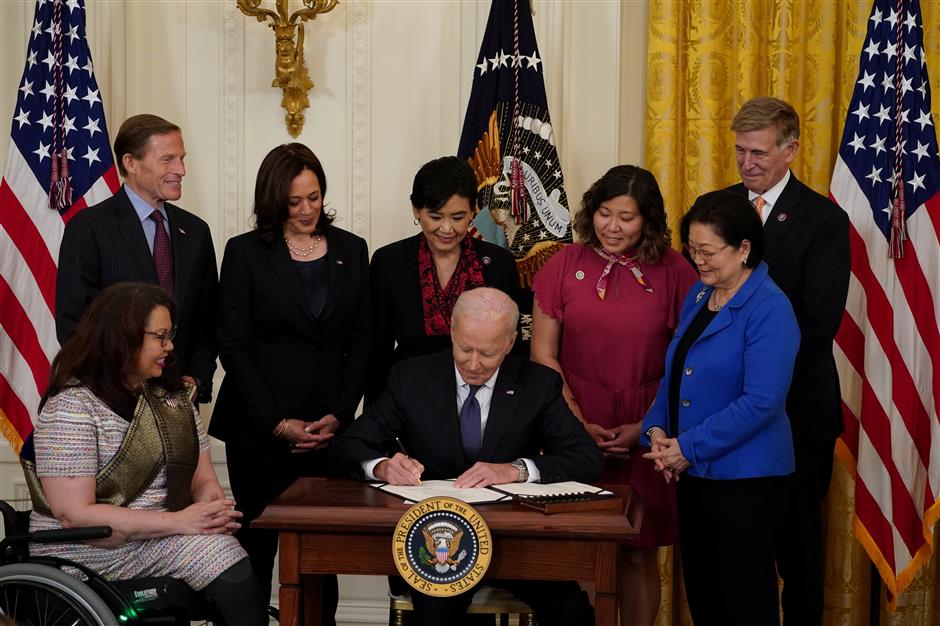 US President Joe Biden signs the COVID-19 Hate Crimes Act into law during a ceremony in the East Room at the White House in Washington, US, on May 20, 2021.

President Joe Biden signed a hate crimes law on Thursday aimed at protecting Asian-Americans who have suffered a surge in attacks during the COVID-19 pandemic.

Racism, Biden told Asian-American politicians and senior members of Congress in a packed room at the White House, is "an ugly poison that has long plagued our nation."

Reeling off a list of violent incidents, which took place against a backdrop of anti-Chinese sentiment linked to the pandemic, Biden said the Asian-American community had been made a "scapegoat."

"Too many Asian-Americans have been waking up this past year genuinely fearing for their safety, just opening their door and walking down the street," he said.

Stop AAPI Hate, an activist group, says there were 6,603 hate incidents — mostly verbal insults — in the year from March 2020, but many more were likely not reported to police.

The bill signed by Biden, after rare, overwhelming bipartisan support in Congress, improves access for reporting such crimes and seeks to smoothen procedures for the authorities to respond.

"I mean this from the bottom of my heart: Hate can be given no safe harbor in America," Biden said, "Silence is complicity. We cannot be complicit."